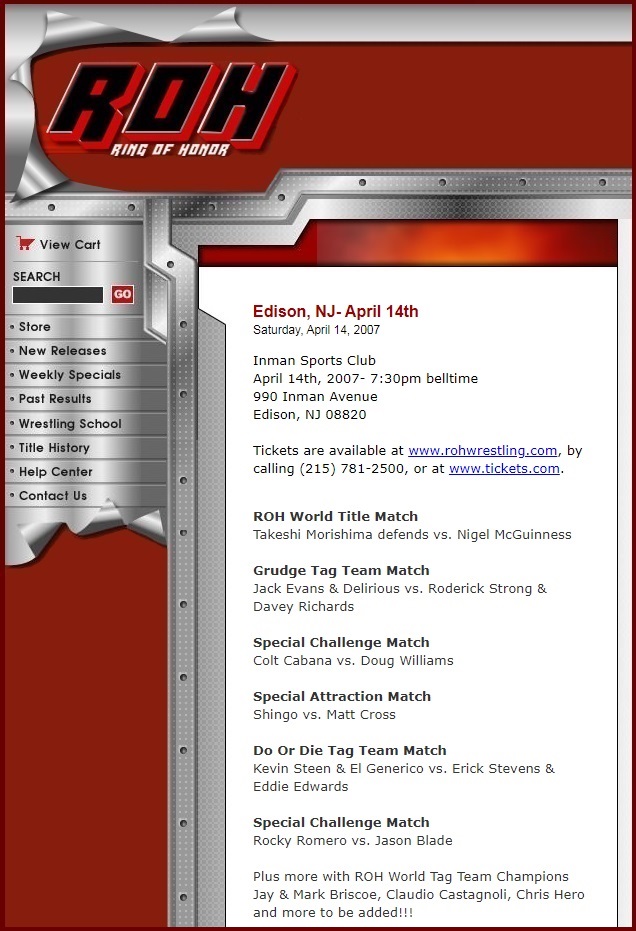 ROH: April 14, 2007
Inman Sports Club - Edison, NJ
Less than two months ago, I was at a show in Philadelphia which was the second in a series of six shows that were collectively known as The Fifth Year Festival.  These shows began in New York City and ended with two shows in Liverpool, England. 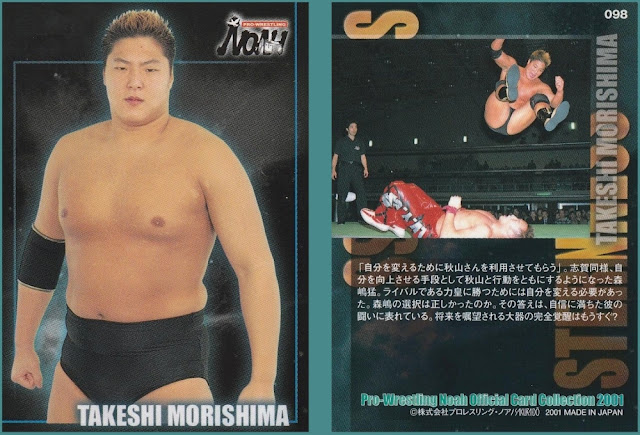 The main event of the Philadelphia show had an unexpected ending of Takeshi Morishima  defeating Homicide for the ROH World Championship.  It's not that Morishima is an undercard or untalented wrestler.  He's a big dude who is surprisingly agile in the ring for his size, and he works a hard hitting match that could easily main event anywhere in the world.  It was shocking because, to the best of my knowledge, Morishima is not a contracted ROH talent.  He works for Pro Wrestling Noah and, as far as any of the fans were told, was temporarily touring the United States.  Then I remembered that the Fifth Year Festival ended in England, and ROH has a big British dude on their roster named Nigel McGuinness who they've been building up for years, and it all made sense. 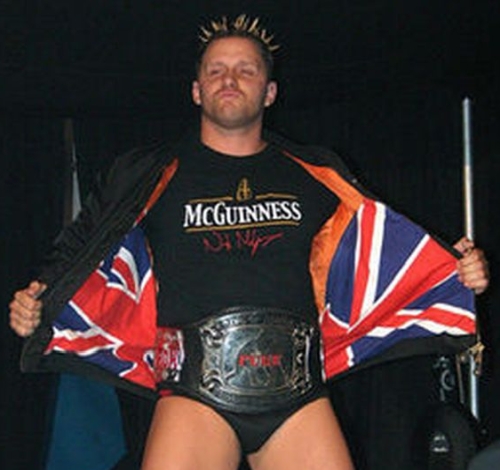 I thought for sure that they were booking Morishima to be a transitional champion to get the belt onto Nigel in his home country.  Then, Morishima would go back to Japan and Nigel would come back to the states and spend the spring and summer feuding with Homicide.
Well, that didn't happen.  In fact, Takeshi Morishima didn't wrestle on the Liverpool shows at all, and he's still in the United States to main event in tonight's show.  I did get one thing right - he was scheduled to defend the title against Nigel McGuinness, and I thought for sure that we were going to see another title change.  However, that wasn't the case.  After an intense match with a few near falls for McGuinness, Morishima won via pinfall after hitting three Backdrop Drivers. 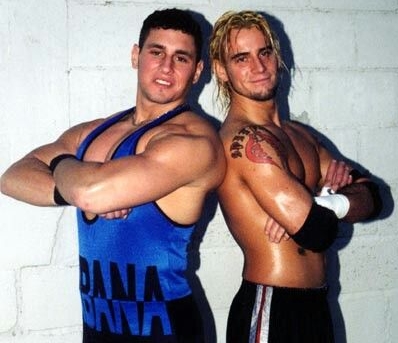 As awesome as the main event was, my favorite part of the show was the fifth match of the night.  Colt Cabana has been a part of Ring Of Honor since its first year in operation back in 2002, and he was one of the highlights of every show that he wrestled on.  I met him a few times, and he was one of the kindest people I have ever spoken to, inside or outside of professional wrestling.
Colt signed with the WWE earlier this month, so he'll be joining his old buddy CM Punk on television.  He's finishing out his ROH shows that he's already been booked to appear in, so this was his farewell match to Ring Of Honor fans on the East Coast.  After his match against Doug Williams, he gave a nice speech to the fans where he said that he wasn't moving up, he was just moving on.  It's not going to be the same around here without Colt Cabana, but I'm extremely happy for him for the opportunity he's been given  It truly could not have happened to a nicer dude. 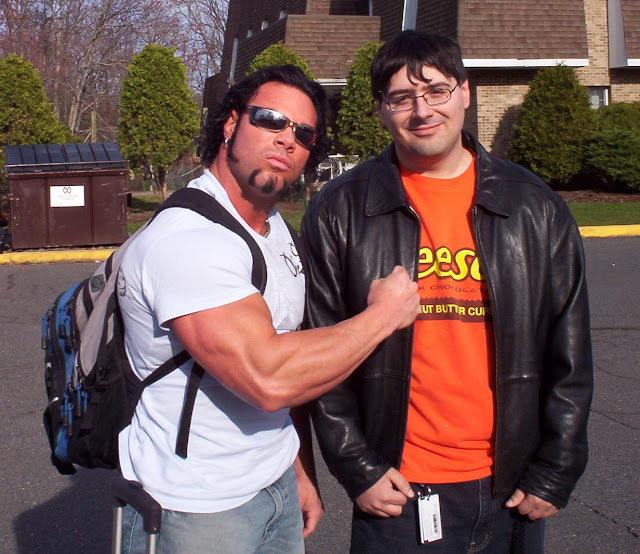 Speaking of nice dudes, I bumped into Tank Toland before the show.  Look at the size of this dude's arm!  His bicep is the size of my freaking head!  Tank joined the ROH roster late last year after wrestling as James Dick (one half of the tag team, The Dicks) in WWE.  He's part of Larry Sweeney's Sweet & Sour Incorporated faction as Chris Hero's personal trainer.  He's got the size and the look, and he's great in the ring, so this can definitely work really well if the company gets behind it.  I can absolutely picture he and Hero having a lot of success in ROH as a Hart Foundation style tag team, with Hero as the Bret Hart technician, and Toland as the Jim Neidhart muscle. 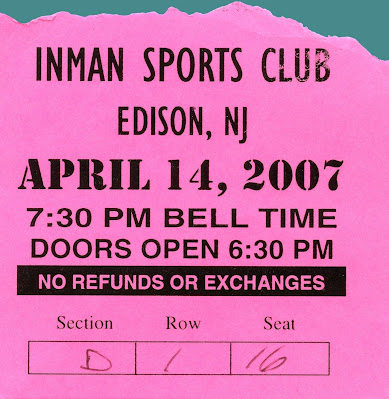 I was hoping to see Colt Cabana after the show, just to shake the man's hand and thank him for being a big part of what makes coming to these shows so much fun.  I didn't see him, but I did have the opportunity to meet some of the other wrestlers from tonight's show. 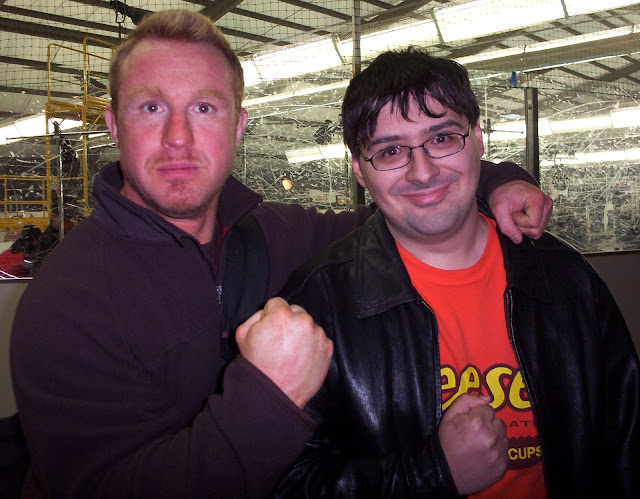 Although I didn't bump into Colt, I did get to meet his opponent from tonight, Doug Williams.  Williams is a British wrestler who was a regular in ROH show early on, and he was the second ROH Pure Champion in company history. 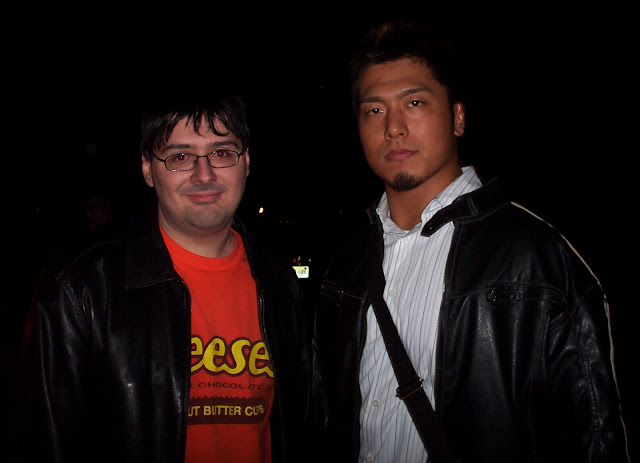 This is Shingo Takagi, who came to Ring Of Honor last year from the Dragons Gate promotion in Japan.  He held the ROH Tag Team Championship last month with fellow Blood Generation  member Naruki Doi. 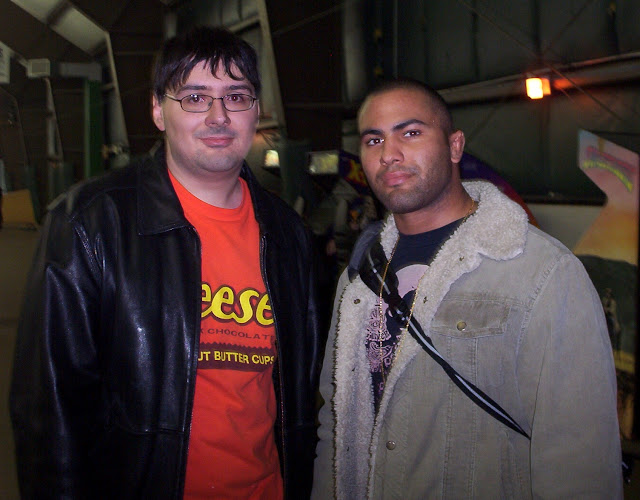 Rocky Romero is one of the most accomplished wrestlers in the world today.  He was trained by Antonio Inoki and wrestled for New Japan as Black Tiger IV where he had a four month reign as the IWGP Junior Heavyweight Champion.  He also became a big Lucha Libre star in Mexico where he was a three time World Lightweight Champion in CMLL.  In Ring Of Honor, he's a former Tag Team Champion as one half of the Havana Pitbulls, and a member of The Rottweilers faction with Homicide, Low Ki, and his Pitbulls teammate Ricky Reyes.
In the last ROH show in Edison, Romero walked out on Ricky Reyes in a match against The Briscoe Brothers, officially breaking up the tag team.  He is the newest member of a group that also includes Roderick Strong and Davey Richards called the No Remorse Corps.  Not gonna lie, it's not the greatest name I've ever heard for a wrestling faction, but its made up of three of the most talented performers in ROH, so they've got a hell of a lot of great matches in their future.  I look forward to seeing where it goes from here. 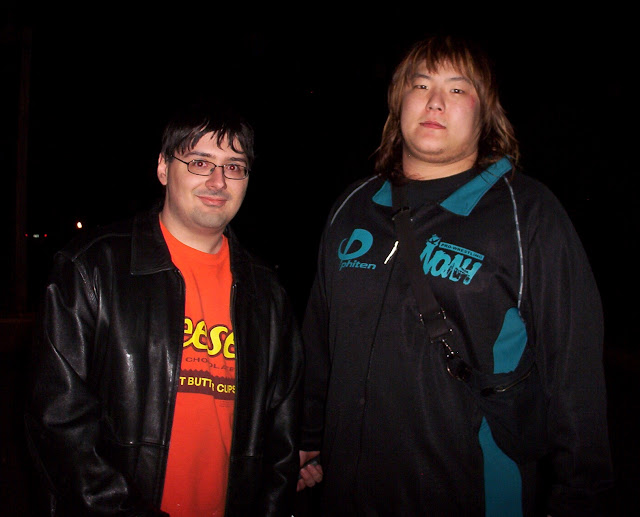 Last, but certainly not least, I met the ROH World Champion himself, Takeshi Morishima completely by accident.  I was headed out to my car to go home, and I guess he must not be parked too far from where I was, because I literally almost bumped into the man.  He was a very cool guy and was happy to take a picture with me.  A smaller man who was with him seemed a bit less happy.  I don't speak Japanese, but I'm guessing that he said something along the lines of "stop taking pictures with this dork and let's get the hell out of here".  Sorry dude. 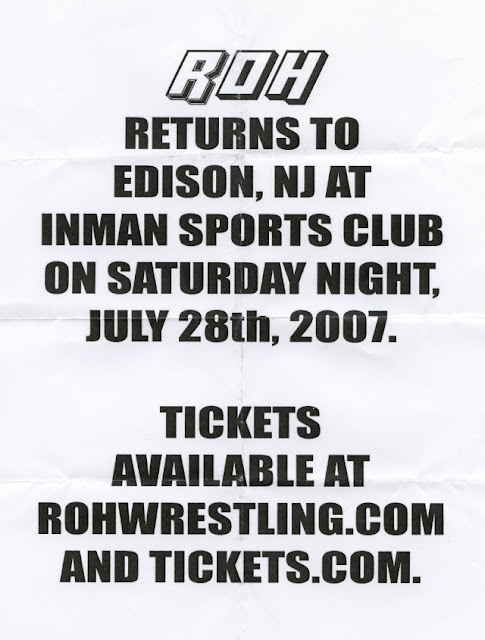 UPDATE: This show was released on DVD under the name "Fighting Spirit".  It is available on ROHWrestling.com.