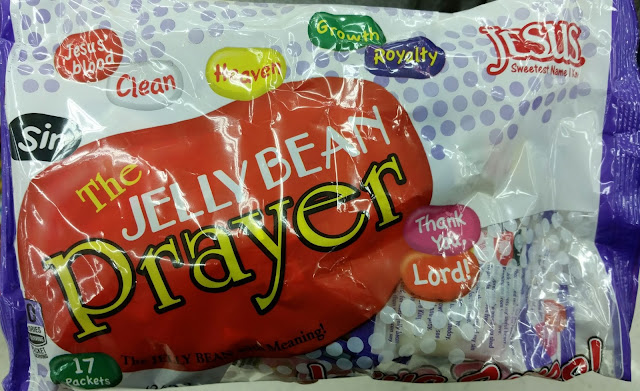 The Jellybean Prayer
Scripture Candy (2016)
These jellybeans are hands down the creepiest thing I've ever found at the grocery store.  The only thing that might make it scarier is if it had a picture of Jim Jones on the label.  Even without his face, it looks like his spirit was channeled by the product development team.

This is far spookier than any Halloween candy I've enjoyed over the years, and not in a good way.  The stuff I used to bring home after a fun night of trick-or-treating had pictures of vampires, witches and skulls, but they were designed to be light-hearted and fun.  There's not an ounce of fun in these jellybeans.  Check out those flavors.  Gee Mom, do you think I could have a handful of Sin and Jesus' Blood before dinner?  And what the hell does clean taste like?  Soap?  Bleach?  I'll let someone else go ahead and find out.

If you think it doesn't get any more bizarre than this, boy howdy, are you in for a surprise when you flip the bag over.

My mother's side of the family is Mormon, and my father's side is Roman Catholic and Protestant.  They're not all strictly religious, but I've had my fair share of exposure to different religious practices.  For example, my maternal grandfather will give a blessing before Thanksgiving dinner.  It's a very pleasant prayer in which he gives thanks for the food we are about to eat, and may it provide us nourishment and keep us healthy.  I'm very happy to say that it doesn't include any references to our black and sinful heart.  I'm also reasonably sure that each food item doesn't have its own prayer on the package, though I'd be interested to learn what might be included in the Purdue Turkey Prayer or the Libby's Pumpkin Prayer.  I'd like to think that the latter would be written by Linus from the Peanuts comics.

As whacked out as this product and its packaging are, at least it's gone after the season is over.  All you've got to do is thank the lord for these jellybeans, which are apparently so tasty that they mean more than words can say.  Then after you eat the candy, you toss away the package and begin making appointments for the therapist you're sure to need after growing up with a family who would give you this candy...

...unless they got you the collectible tin. 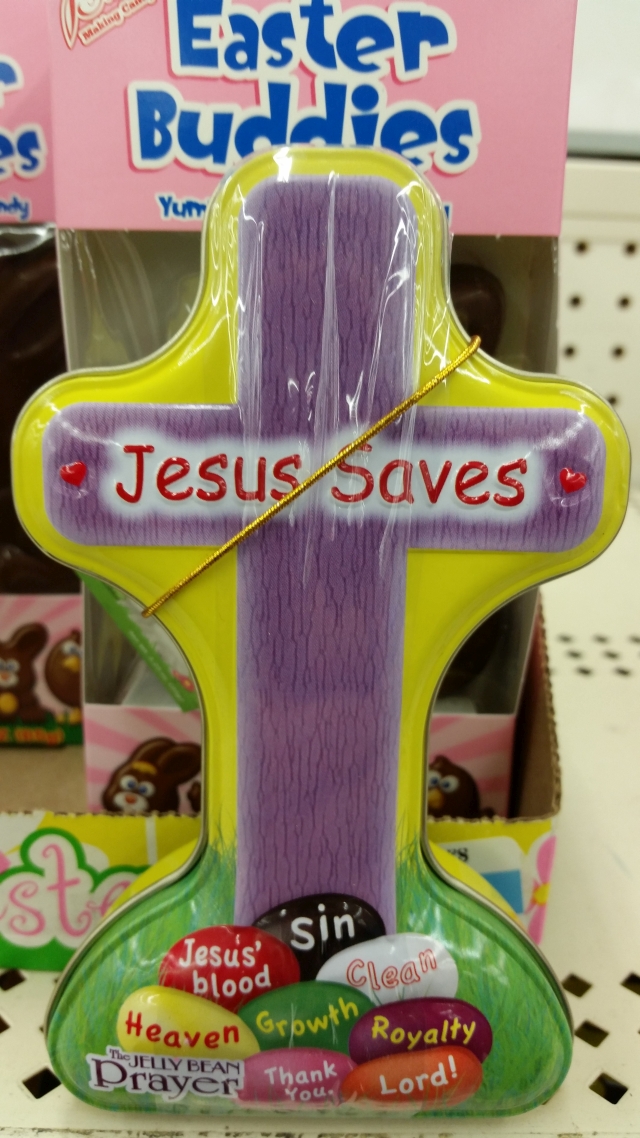 You'll find these at K-Mart if you really want them, though you might want to wait until after Easter Sunday when they go on sale.  I have a hunch they'll have plenty of them left over after the season.