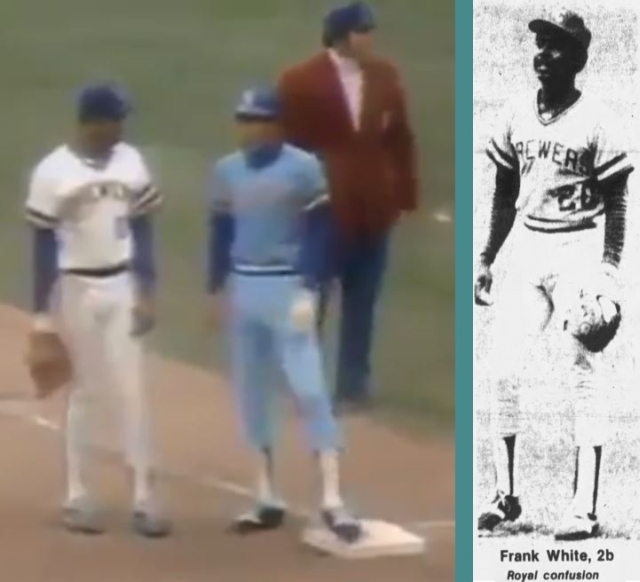 Kansas City Royals @ Milwaukee Brewers
June 12, 1977 - Milwaukee, WI
In the second week of June 1977, the Royals were in Milwaukee for a three game series against the Brewers.  After the second game in the series, someone broke into the visitors clubhouse at Milwaukee County Stadium and stole $3,500 worth of gear, including 60 jerseys, 20 caps, 20 gloves, 15 team jackets and 10 pairs of shoes.  This left the visiting Royals without enough uniforms to field a team for the final game of the series.  To solve the problem, the Brewers loaned their road uniforms to the Royals, and the majority of the Royals took the field on June 12th wearing Brewers uniforms to play against the Brewers.

Royals center fielder Amos Otis wore the road uniform that belonged to Brewers manager Alex Grammas after he jokingly suggested that he be given the Hank Aaron jersey that was framed and on display at the ballpark.  Future Hall of Famer George Brett was one of the few members of the Royals that had a full Kansas City uniform.  Both he and Hal McRae wore #5 that day, with McRae borrowing former Royal Jamie Quirk's Brewers uniform.  Quirk would go on to return to the Royals the following season and was a member of their 1985 World Series Championship ballclub.

To add insult to injury, the Brewers shut out the Royals 4-0 to win the game and the series.  The media added further insults with post-game headlines which suggested that the thieves should have stole the Royals bats since they weren't using them anyway.

Speaking of the media, the only photos that exist of this game are from newspaper clippings and screenshots from an episode of This Week In Baseball that aired two days after the game.  To the best of my knowledge, that is also the only video of this game.  It has been shared on YouTube by Classic MLB1.