It Was A Long And Rainy Night 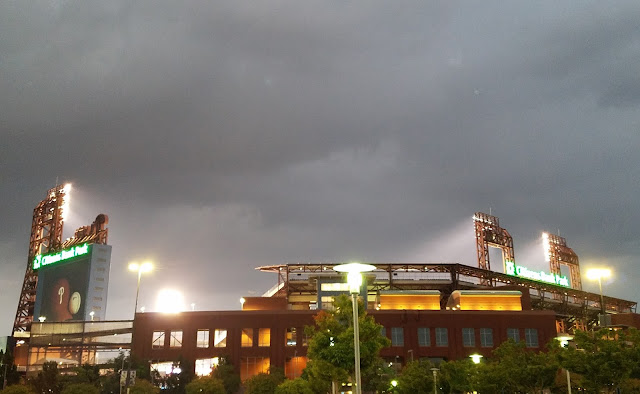 Pitching: Ben Lively vs. Kendall Graveman
Results: Phillies defeated Athletics, 5-3
Yesterday was a pretty busy day.  We left West Hazleton in the morning and drove about two hours south to the Timeline Arcade in Hanover to play some games and to meet Howard Scott Warshaw.  We stayed for as long as we could, but we had to head out before the question and answer session with Mr. Warshaw ended or else we would have missed the start of the Phillies game that we had tickets for.  Now, I've made the drive from my house to Citizens Bank Park so many times that I feel like I could do it blindfolded, but the Timeline Arcade is about 125 miles east of the ballpark and I'm unfamiliar with the route.  That's probably why I ended up taking a wrong turn and ending up in Delaware before finally getting to the ballpark. 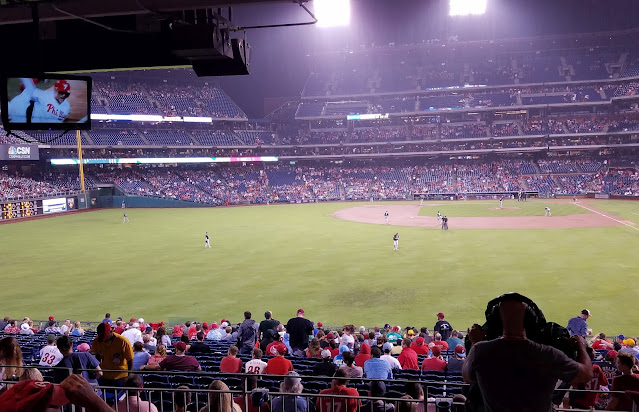 We managed to get to the ballpark during the last out of the top of the first inning, so we didn't miss too much.  However, all of the rushing to get to the game meant that we didn't have time to stop for food, so we went to Harry The K's to have some dinner and watch the game from left field.  It ended up being good timing because the heavy rain that we drove through to get to the ballpark had followed us to the game.  The game went into a rain delay after the top of the 3rd with the Phillies down 2-0 after a Matt Olson home run and a sacrifice fly from Boog Powell (no relation to the 1970 AL MVP) in the top of the 2nd. 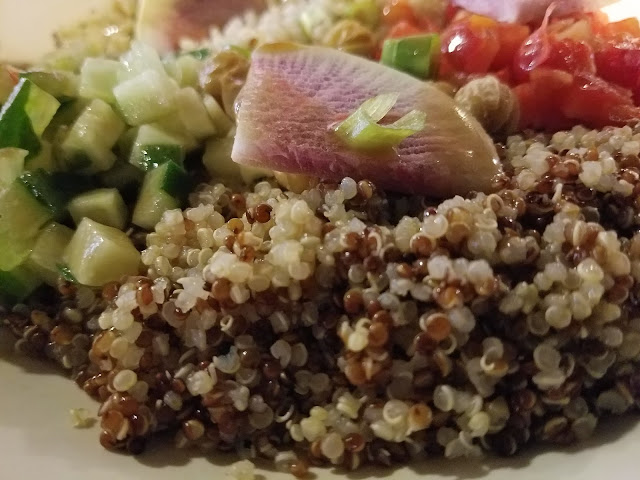 There are few places in the ballpark that you'd rather find yourself at the start of a rain delay than Harry The K's.  You get to relax under a roof while avoiding the crowd of folks who are all running for cover away from the rain, and it's sectioned off so that the only people who are up there are other folks who have been seated for their meal.  I had the Farmer's Market Grain Bowl during the home opener and it was really good, so I ordered it again.  It's a plate of toasted red quinoa, brown rice, sweet peppers, cucumbers, radish and herbs with a honey balsamic vinaigrette dressing - very tasty! 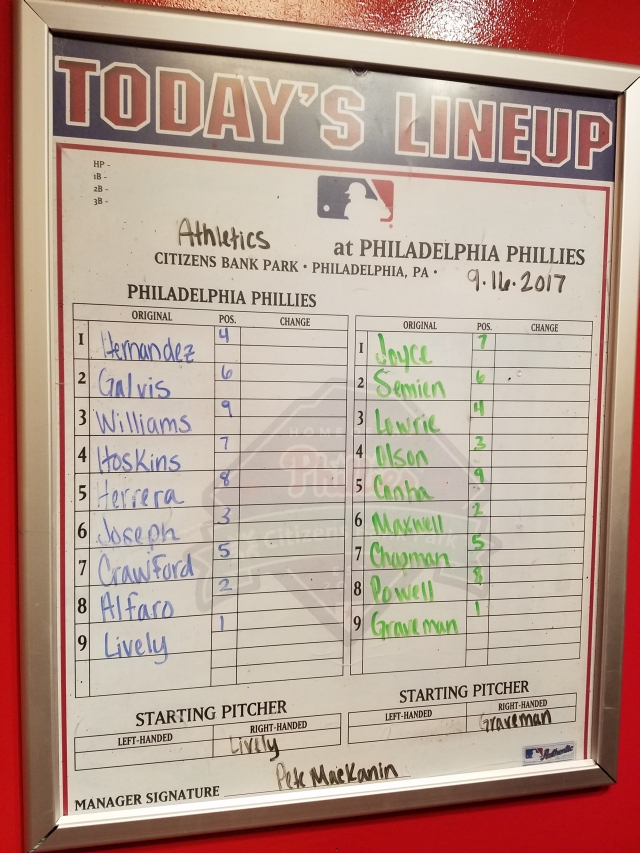 The rain delay lasted an hour and 46 minutes.  We killed as much of that time as we could having dinner and dessert at Harry's, then we walked around the ballpark for a while before heading to our seats. 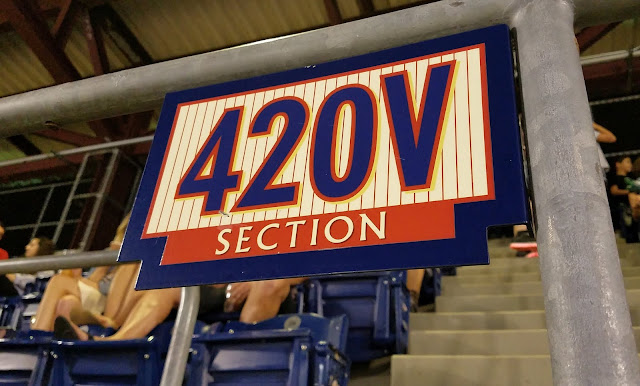 I think I have a new favorite place to sit on the 400 level.  Section 420V is an isolated row of four seats above one of the entrances, and it's positioned directly behind home plate.  It's not like you're in a fancy box seat or anything, but it's just about as private of a seating area that you can expect in the cheap seats.  Also, the top of the doorway serves as kind of a table where you can set your food and drinks.
By the time the game started back up, both starting pitchers had to be pulled from the game.  The Athletics replaced Kendall Graveman with Chris Smith in the bottom of the 3rd.  The Phillies took advantage of the pitching change to cut the lead in half after a Ty Kelly double followed by an RBI single by Cesar Hernandez.
The Phillies brought in Yacksel Rios in relief of Ben Lively and would go through a total of seven pitchers in the game, with Hoby Milner, Edubray Ramos, Luis Garcia and Hector Neris coming into the game.  Fortunately, they didn't give up another run until Jed Lowrie hit a solo home run off of Neris in the top of the 9th. 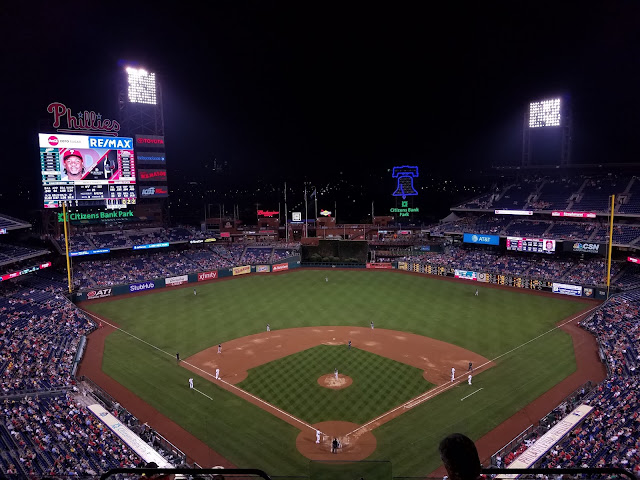 In the bottom of the 4th, the Phillies tied the game on a rally that began with a Rhys Hoskins leadoff walk.  Odubel Herrera replaced him on base after a fielder's choice, and Tommy Joseph singled to put runners on first and second with one out.  JP Crawford hit an RBI single to tie the game and knock Chris Smith out of the game. 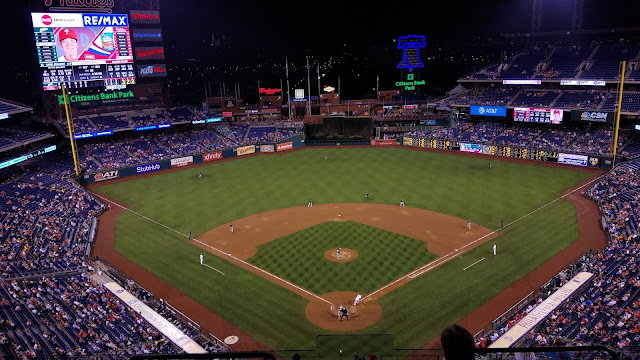 The game remained tied until the bottom of the 6th after Simon Castro walked JP Crawford, then gave up a two run homer to rookie catcher Jorge Alfaro to give the Phillies a 4-2 lead.  The rally ended when Castro retired newcomer Hyun Soo Kim, who came to the Phillies at the trade deadline in the deal that sent Jeremy Hellickson to the Orioles. 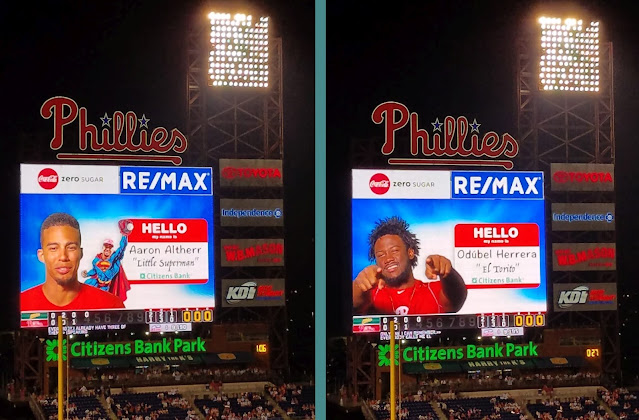 The Phillies manufactured an insurance run off of Santiago Casilla in the bottom of the 8th.  Odubel Herrera led off the inning and was hit by a pitch.  He then store second, advanced to third on a wild pitch, and scored on a JP Crawford sacrifice fly.  Castilla then gave up a single to Jorge Alfaro, but he was able to limit the damage to a single run and escape the inning after striking out Aaron Altherr, who is apparently known to some as "Little Superman".  You learn something new every day. 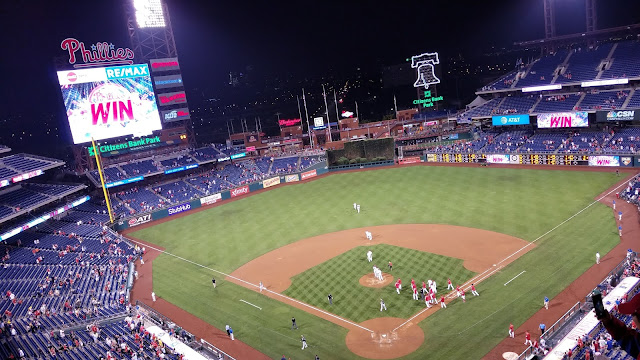 And that was the ballgame.  Even though I was dead tired for the last few innings and didn't get home until well after midnight, I'm very glad that I was able to see this game.  It showed that the Phillies have a young core with Hoskins, Herrera, Crawford, Alfaro, Hernandez and Galvis (who I'm pretty sure the team will be moving on from, which I think is a mistake).  It also gave me the opportunity to see the Oakland A's.  It's been a goal of mine to attend at least one game for every MLB club in my lifetime, and the opportunity to see a west coast team from the American League doesn't happen very often.