Ben Franklin Would Have Been A Retro Gamer 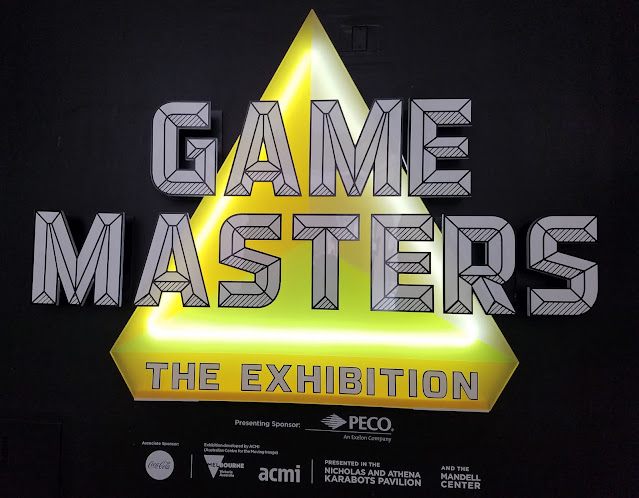 Game Masters: The Exhibition
The Franklin Institute - Philadelphia, PA
Game Masters is a pretty awesome experience for gamers of any age.  It includes arcade, console and PC gaming exhibits chronicling everything from the 70's through the modern era.  This traveling show has had stops in Australia, New Zealand, Scotland, Sweden, Germany and in Portland, Columbus and San Diego before it's summer 2018 home at The Franklin Institute in Philadelphia.

The first section is dedicated to vintage arcade games.  The machines are all set to free play and are organized by their designer, including sections dedicated to Toru Iwatani, Tim Skelly, Eugene Jarvis, Tomohiro Nishikado, Ed Logg, Masanobu Endo, Konami and Taito, among others. 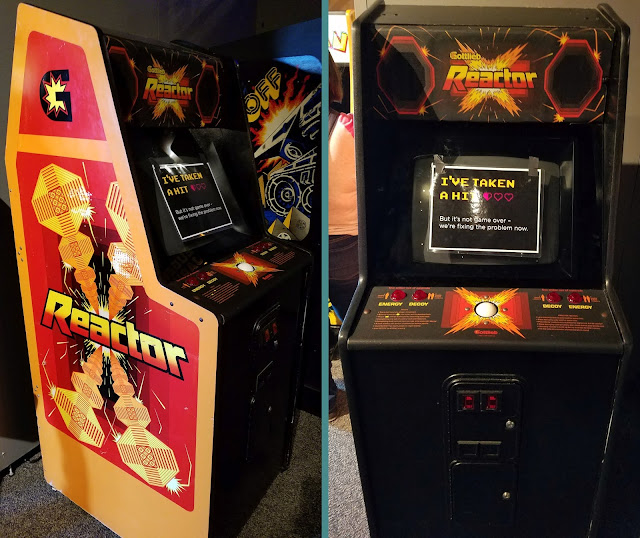 I used to play the Atari 2600 port of Reactor all the time when I was a kid.  The game it was based on came out in arcades in 1982 and wasn't in my local Aladdin's Castle or in the arcades at Wildwood by the time I started visiting arcades, so this is my first time seeing it.  Unfortunately, the game was out of service, but it was still pretty awesome to see the original cabinet. 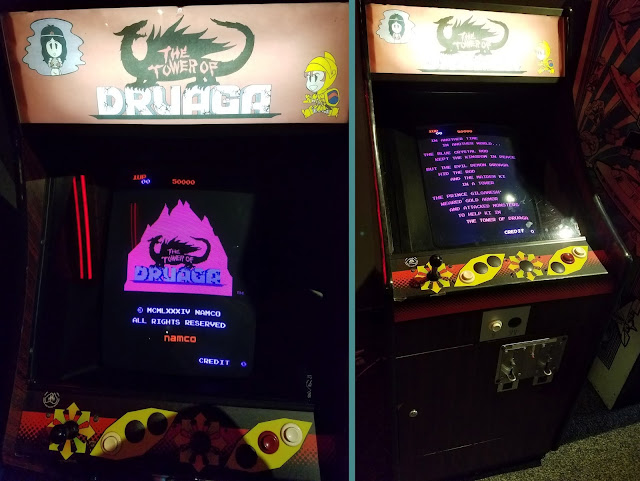 The Tower of Druaga is known as one of the games that inspired The Legend of Zelda on the NES.  It was first released in Japanese arcades in 1984.  I don't know if the original arcade cabinet ever made it to the United States but if it did, I never saw it.  The first time I got to play The Tower of Druaga was on Playstation when I was a teenager.  It was on the Namco Museum Collection: Volume 3 compilation.  It actually reminds me more of Gauntlet than Zelda.  It's a punishingly difficult game and that incorporates elements of Dungeons & Dragons and Pac Man for a unique experience. 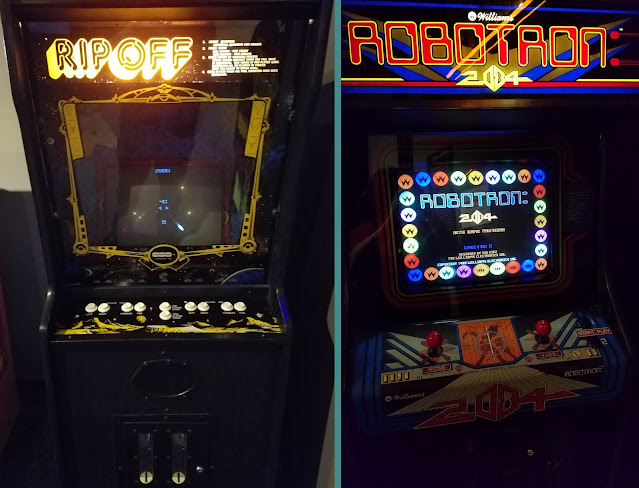 I definitely played Robotron: 2084 in arcades when I was a kid, but I've never heard of a game called Rip Off.  You have to admire the guts that it took to call a machine that eats your quarters "Rip Off".  It's a vector graphics shooter that was designed by the same man who created Reactor - Tim Skelly.  It never made it to the Atari 2600, but this arcade classic from 1980 was ported to the Vectrex in '82. 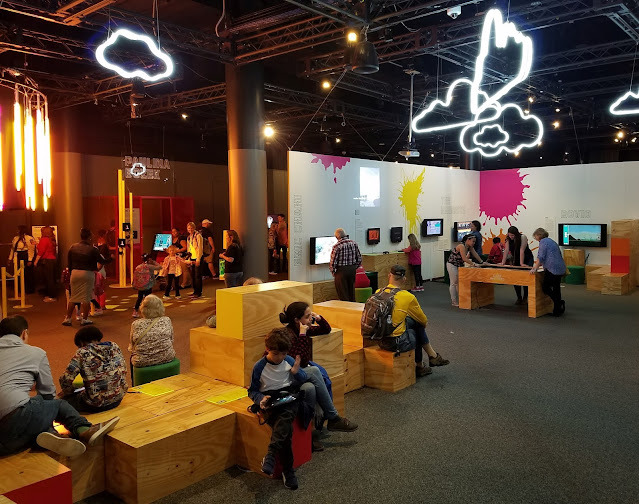 There are stations set up throughout the exhibit with everything from console games hooked up to televisions to handheld games.  It's a pretty cool atmosphere that you could easily get lost in and spend a few hours playing the classics. 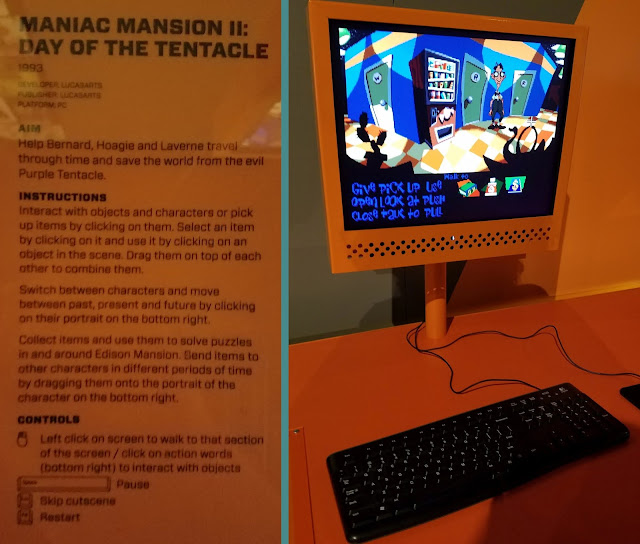 I was very happy to see one of my favorite PC games of all time represented at the exhibition.  Maniac Mansion II: Day Of The Tentacle is a point-and-click adventure that was released in 1993 by LucasArts.  Back then, the most advanced thing my computer could handle was Ninja Rabbits and the Out Of This World demo disk, but I played the original Maniac Mansion on the NES, and I discovered the sequel in the mid-90's on the IBM Aptiva that I had in 1996.  To this day, it's one of my favorite games to play when I want to relax. 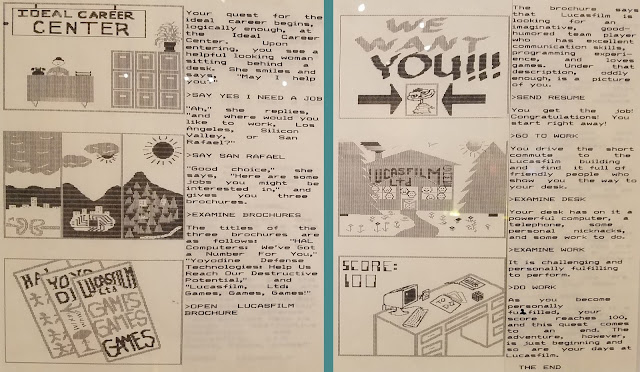 Speaking of Day Of The Tentacle, this was the job application that designer Tim Schafer submitted to LucasArts in 1989.  He went on to co-design Day Of The Tentacle with Dave Grossman, and hit big with Grim Fandango, which was named Game Of The Year by GameSpot in 1998.
Overall, this exhibit is an excellent way to experience the history of video games.  If you're within driving distance of Philly, I highly recommend it.