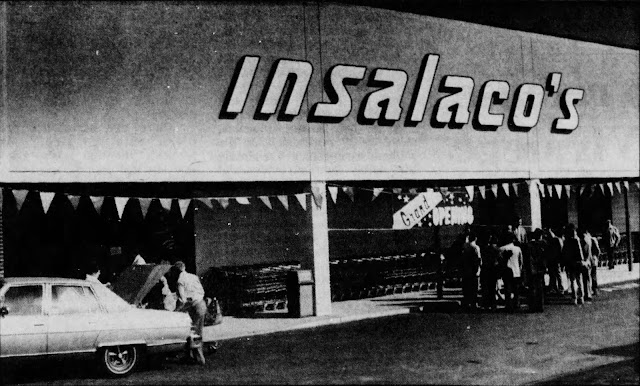 Insalaco's Supermarket (1988)
Valmont Plaza - Hazleton, PA
Thirty years ago today, Insalaco's hosted the grand opening of their 10th supermarket.  From the weekend that it opened, this was the store where my grandparents would get their groceries.  They had a nice bakery with kaiser rolls in plastic bins that we bought every week.  Grandma used them to make sandwiches that looked like something Shaggy would have eaten in the Scooby Doo cartoons.

I looked forward to going grocery shopping with them because they let me pick three things to get.  Every time I picked something up to look at, my grandfather would look at me and remind me that I could put it in the cart if I wanted it, but it would be one of my three things.  Once in a while if they were in a good mood, I was able to sneak in a WWF Magazine as one of them, but they didn't always go for it.  It usually ended up something like Ecto Cooler and a box of Slim Jims.

When I think about this store, the thing I remember the most was the fact that the cash register spoke... a lot.  Every time the cashier scanned an item, a loud female electronic voice would say how much it was.  We typically went grocery shopping on Saturday when the store was pretty busy, so the checkout area a bizarre chorus of robots shouting out prices.

The store closed some time in the 90's and there is now a Big Lots occupying the building.