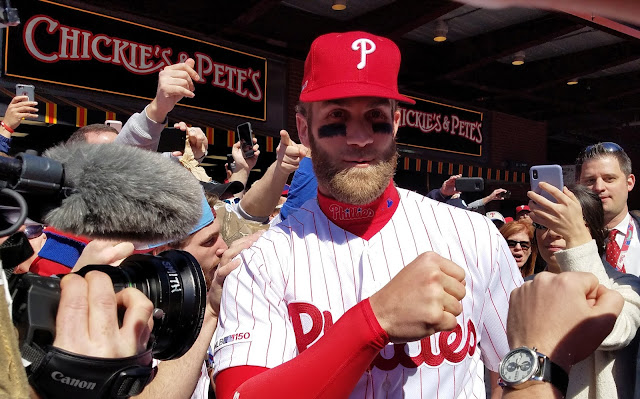 It's been ten years since my first Opening Day.  It's a very different team than it was back in 2009, but the energy at Citizen's Bank Park is back.  One of the reasons why is this dude - right fielder Bryce Harper.  We scouted out a place near Chickie's & Pete's at the edge of Ashburn Alley to greet the players at the Leadoff Walk.  It's sort of like a mini parade where the players high five and fist bump the fans as the walk down Ashburn Alley and to the field.  That's where I took this photo of Bryce and where I got to fist bump him before his first game as a member of the Phillies.

Opening Day was a day of Phillies firsts.  It was the first game in a Phillies uniform for Harper, center fielder Andrew McCutchen, catcher J.T. Realmuto, shortstop Jean Segura and relief pitcher David Robertson.  On the other side, it was the first appearance of third baseman Josh Donaldson as a member of the Braves.

The Phillies got off to a great start.  Andrew McCutchen led off the game with a solo homer in his first at-bat as a member of the Phillies.  Aaron Nola had a rough 2nd inning giving up a single and three walks, but he limited the damage to one run, an RBI single by Nick Markakis that scored Ronald Acuna (Markakis was thrown out trying to stretch it into a double).  The Phillies took the lead again in the bottom of the 4th when J.T. Realmuto walked and both Odubel Herrera and Cesar Hernandez followed with RBI singles.  The Phillies added to their lead in the bottom of the 6th when Maikel Franco hit a three run homer off of Shane Carle to score Rhys Hoskins and Cesar Hernandez.  The Braves fought back in the top of the 7th when pinch hitter Matt Joyce hit a two run homer off of Hector Neris, but the Phillies did more damage in the bottom half of the inning.  It began when Andrew McCutchen walked and Jean Segura singled.  The runners advanced to 2nd and 3rd on a throwing error, and the Braves responded with the dumbest intentional walk I have ever seen, putting Bryce Harper on first to face Rhys Hoskins with the bases loaded and no outs.  On the second pitch of the at bat, Hoskins hit his first career grand slam.  The Braves scratched out one last run in the top of the 8th when Ronald Acuna hit an RBI single off of David Robertson to score Josh Donaldson, but he got out of the inning, and Pat Neshek pitched a scoreless 9th for the 10 - 4 Phillies victory. 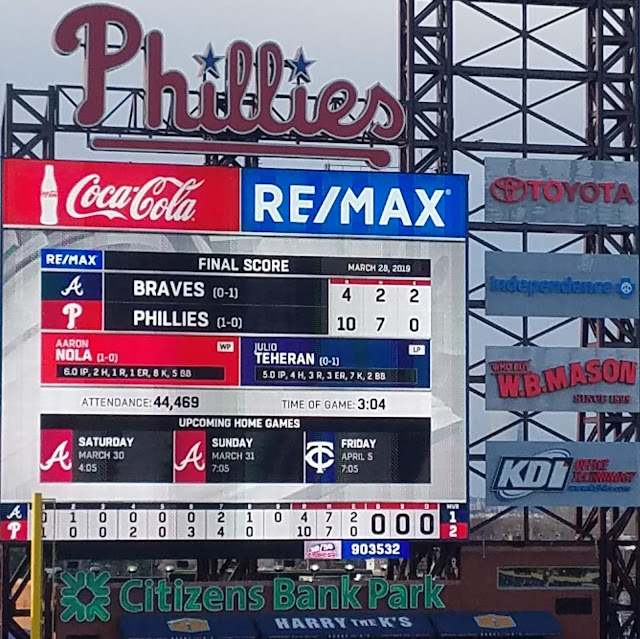