A Square Meal From A Shady Place

Shady Maple Smorgasbord
East Earl, PA
I've heard about this restaurant for years, but I hadn't been here until this past Saturday.  The people who told me about this place said that it was huge, but nothing could have prepared me for just how large it is.  At first, I thought Google Maps had brought me to the wrong place, because the building looked like a megachurch or an arena.  It's neither of those things, but it is the largest buffet in the United States.

Not only was the place massively huge, but it was jam packed.  The line to pay to get in was about 15 minutes, and it was a longer wait in an even larger line to get a table.  It wasn't for a lack of tables or staff either.  There were hundreds of tables, and the employees had a table cleaned and a new family seated there at a speed that would have impressed the pit crew at a race track.  However, it was definitely worth the wait. 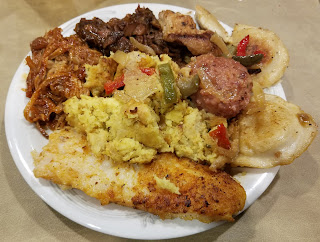 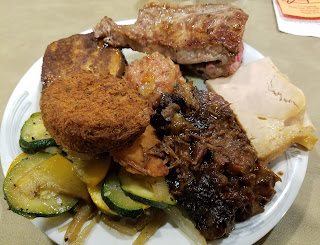 I didn't take photos of the buffet area, but it was massive.  There were stations where New York strip steaks were being grilled up alongside thick, juicy hamburgers.  This wasn't far from fresh grilled Cajun catfish and salmon station, and right in front of buffet tables that included crab cakes, fried chicken, turkey, potato stuffing, pierogies, roast beef, pork barbecue, and tons of other meats and vegetables from local Amish and Mennonite farms.  One of my favorite foods were the ham balls.  You can see one in the photo at the upper left - it's the big meatball-looking thing at the center right, next to the pierogies.

The drink options were almost as impressive as the food.  They had everything you could think of with multiple options for soda, milk, juice, coffee (hot and iced).  They even had an Icee Machine.  I had a strawberry banana kiwi juice that tasted like Snapple.  There were plenty of desserts too, but I didn't make it that far.  After these two very large plates of food, there was no room for anything else.  I can't eat the way I used to.

Afterwards, we went downstairs to the gift shop.  I was picturing a cash register with some postcards, t-shirts, magnets, and maybe some keychains.  What we found was a ridiculously huge department store that sold just about everything you could think of.  Seriously, it was larger than Boscov's.  There was at least a dozen toy aisles alone, and it wasn't little drug store toys - they were the types of toys you'd find at a Toys R Us, if they were still around.  I'm trying to be more careful with money, so I didn't buy anything, but this little guy was my favorite. 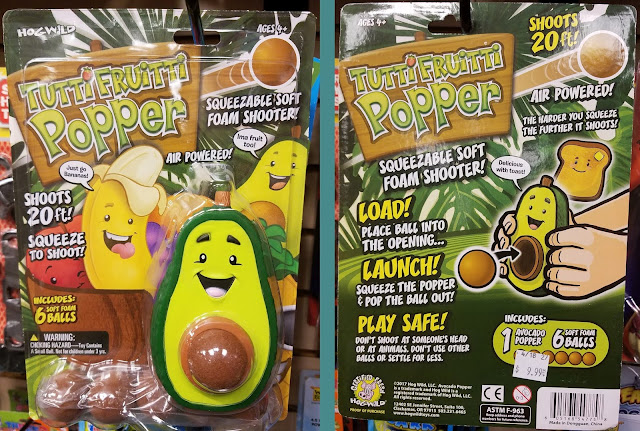 All in all, this place left me feeling blown away.  My grandparents would have loved it - especially my grandfather.  I wish I could have brought him here.  I could only imagine how he would have reacted to all of this food.  My grandmother would have enjoyed it too, particularly the store, but I doubt she could have been convinced to sit that long in a car unless there was a casino involved.  As for myself, I will definitely make it back here any time I'm in Lancaster County.