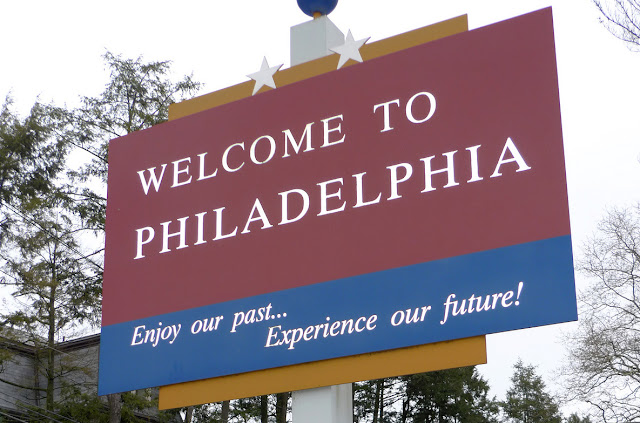 The MLB trade deadline passed at 4:00 yesterday afternoon.  While they didn't make any flashy or headline grabbing trades, the Phillies managed to acquire eight players in July without giving up any of their prospects, and several of them have the potential to be significant upgrades.

So far, the main addition has been Drew Smyly.  He silenced a lot of his critics when he struck out 8 in a six inning start against the Pirates.  That night, he walked two batters and only gave up a single run.  Two nights ago in his second start, he pitched seven shutout innings against the Giants.  He struck out five and walked just one.  Not too bad for a guy we signed after he opted out of his minor league contract with the Brewers. 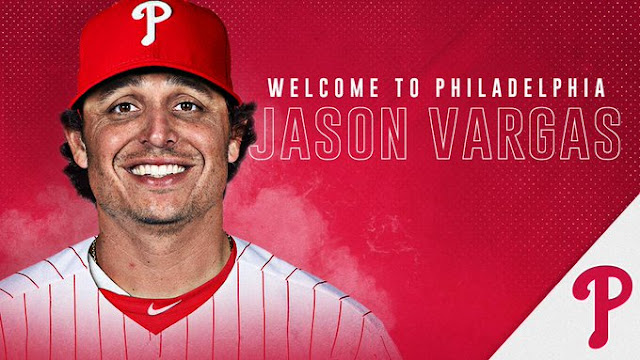 Joining Smyly in the rotation is Jason Vargas, who we acquired in a trade with the Mets on July 29th.  Like the Smyly signing, most of the fan reaction I saw to this trade had a negative tone, and once again, I disagree with the pessimism.  While he's 36 years old and not the ace that fans hoped we'd acquire, he's only two years removed from an All-Star season with Kansas City in which he finished with 18 wins.  He's a solid lefty in the rotation, and his performance for the Mets so far this season has been better than Pivetta, Eflin and Velasquez has been, and his ERA is significantly lower than Arrieta.  Again, it's not a trade that's going to be on the cover of Sports Illustrated, but it's a very smart move.  He represents a significant upgrade to the rotation, and it only cost a 26 year old minor league catcher who was batting .195 in Reading and who is a longshot to make the major leagues at all.

The Phillies grabbed a pair of right handed relievers from the Minnesota Twins to help fill in for the many injuries to the bullpen.  The first came on July 20th when they acquired Mike Morin for cash considerations.  The second arrived ten days later when the Phillies signed Blake Parker, who opted out of a minor league assignment with the Twins to become a free agent.  While they don't have quite the same upside as Smyly or Vargas, they are definitely needed.  The Phillies lost all three of their veteran relievers for the season to injury, and we just learned that David Robertson may be out for all of next year if he goes for Tommy John surgery. 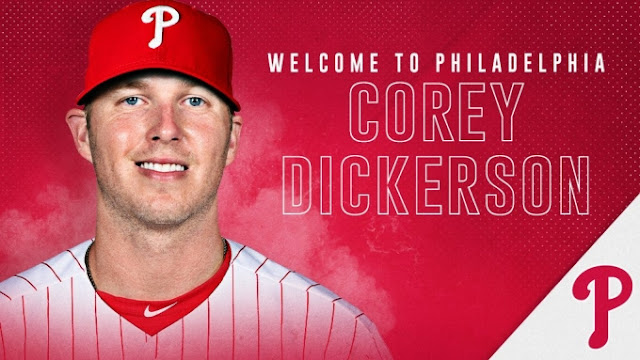 This trade with the Pirates happened at the deadline yesterday, and while I'm happy with the deal, I'm also a bit concerned.  Like Vargas, Corey Dickerson was an All Star in 2017 when he hit .282 with 27 home runs as the left fielder of the Tampa Bay Rays.  He was traded to the Pirates before the 2018 season where his success continued.  He finished last season with a .300 batting average and won the Gold Glove.  He was hurt earlier in the season, but he seems to have bounced back since coming off of of the IL, and all we're sending the Pirates in return is international bonus allotments and a player to be named later.

My concerns are not at all with Corey.  He's a solid and dependable bat, and he bats left handed.  I'm glad to have him on the Phillies.  However, I am a bit curious to know why the Phillies felt that they needed another corner outfielder.  Does this mean that the Jay Bruce injury may be more serious than expected, or is this a move to deepen our bench?  I'm hoping that it's the latter.

The final three new faces for July 2019 have been added for depth in the minors, and you might notice right off the bat that one of those faces looks less than happy.  Logan Morrison (left) opted out of a minor league contract with the Yankees and signed with the Phillies for a chance to return to the Major Leagues.  As you can probably guess by the Iron Pigs logo on his cap, that hasn't happened yet.  Like Dickerson, Logan was a member of the 2017 Tampa Bay Rays.  He hit 38 home runs that year, and he's been doing well this year with the Scranton Wilkes-Barre Railriders.  His primary position is first base, but he also plays left field, and I can imagine that watching the Phillies promote Nick Williams and trade for Corey Dickerson instead of promoting him hasn't improved his mood.

José Pirela (center) was acquired from the Padres for cash considerations.  He's a dependable utility player who has spent time everywhere except catcher, shortstop and center field.  Pirela has only appeared in two games at the major league level this season, but he's had a very productive season at Triple A with the El Paso Chihuahuas, batting .353 with 18 home runs.  I would imagine he'd be the first to be called up to Philadelphia if someone gets hurt.

The final trade of the 2019 season was made just a few minutes before the deadline.  The Phillies acquired right handed pitcher Dan Straily (right) from the Baltimore Orioles for cash.  He finished 4th in the voting for the 2013 AL Rookie Of The Year when he pitched for the Oakland A's, but to be very honest, he hasn't inspired a lot of confidence since then.  Like Morrison and Pirela, he's been assigned to Lehigh Valley.  I don't expect to see him in Philadelphia unless someone gets hurt, but the way this season has been going, that's a distinct possibility.

All things considered, the Phillies have increased their chances at a playoff run, and they did it without losing their top prospects.  Actually, they did it without losing anyone that they could potentially use in a trade this winter to prepare for the 2020 season.  Whether or not it's enough to win a Wild Card spot is debatable, but they improved the team without risking the future.  I'll take it.