The Theaters Are A Quiet Place 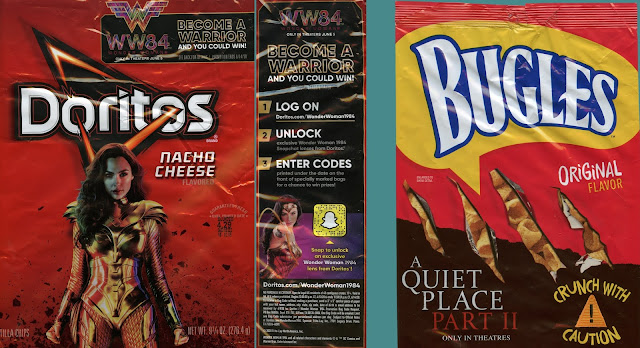 Doritos / Bugles
Frito Lay / General Mills (2020)
Movie theaters across the country and the world have had their doors closed for over a month due to the pandemic.  As a result, many films have been pushed back until the threat blows over and the movies can be properly presented on the big screen.  Despite this, the marketing materials for these films have already been produced and shipped to distributors, including these bags of Doritos and Bugles which were meant to promote Wonder Woman 1984 and A Quiet Place: Part II.

The planned release date for the sequel to A Quiet Place was a month ago: March 20th.  It has been rescheduled to premier in theaters on September 4th.  Wonder Woman 1984 was originally scheduled to hit theaters on June 5th, but this has been pushed back to August 14th.

Whether either of these movies will see the inside of an American theater in 2020 remains to be seen.  Keep in mind, it was only five weeks ago that Major League Baseball announced a two week delay to the start of the season due to Covid-19 with a planned Opening Day of April 9th.  The latest talk is that the season will be played in empty stadiums in May with players under strict lockdown, if it happens at all.