What Would You Do For The Rest Of Your Klondike Bar 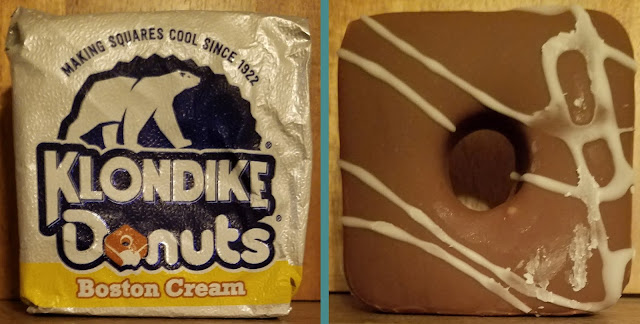 Klondike Donuts
Unilever (2020)
You ice cream thieving polar bear bastards.  I have a bone to pick with you.

First and foremost, shame on me for not noticing that the little drawing of the Klondike Bar on the wrapper has a hole in it.  Even if I had noticed it, I probably would have assumed that it was just a cute way to write the letter "o" in the word "donuts".  What I would not have assumed is that my delightful ice cream square would have a giant gaping hole in the dead center, reducing it in size by 12 grams compared to the classic one.  That's 15% smaller than the traditional Klondike Bar!  This means that when you buy a six pack of Klondike Donuts, you're getting ripped off by almost one full bar.  However, the true kick in the teeth comes when you realize that Boston Cream donuts don't have holes!


On the plus side, the Klondike Boston Cream Donut bar tasted pretty good.  There are two other flavors in the product line: Frosted Strawberry Donut and Triple Chocolate Donut.  I don't think I'll be trying them unless they come packed with a half dozen Klondike Munchkins to make up for the missing ice cream.  I mean, come on!  They had to invest money in this.  They had to modify the manufacturing equipment at their ice cream plant or buy all new machines that were designed for the sole purpose of making this hole-y disaster.  Why spend all that money on a donut gimmick when you could have just as easily made regular shaped Klondike Bars with donut flavors?

You owe me some ice cream, polar bear!