The Legacy Of Doc 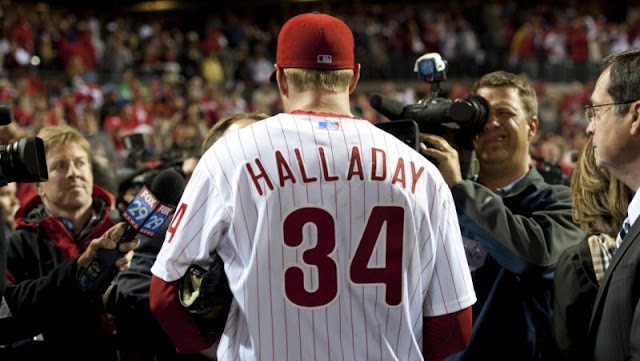 Roy Halladay
Philadelphia Phillies (2010 - 2013)
It's been ten years since Doc pitched the 20th perfect game in baseball history.  It was the most incredible pitching performance I have ever seen.

Over the winter, the Phillies announced that the team will retire his #34 at a pregame ceremony to honor his memory and career on the 10th anniversary of this remarkable accomplishment.  The Hall of Fame ace will be only the 6th member of the Phillies to have his number retired, joining Richie Ashburn, Mike Schmidt, Steve Carlton, Robin Roberts, and the only other Phillie to have ever thrown a perfect game, Jim Bunning.  Additionally, Halladay is the 13th person in MLB history to have his number retired by two teams (the Phillies and Blue Jays).

I got tickets to the game where the ceremony was scheduled to take place as soon as it was announced by the team.  Obviously, this is not happening today as Major League Baseball and just about everything else in the United States remains up in the air due to the pandemic.  Hopefully when everything gets back to normal, they'll announce a new date for the number retirement ceremony.  Until then, we'll have to settle for recordings of the game on YouTube to remember this game and the incredible legacy of Roy Halladay.