New Faces In A Strange Year 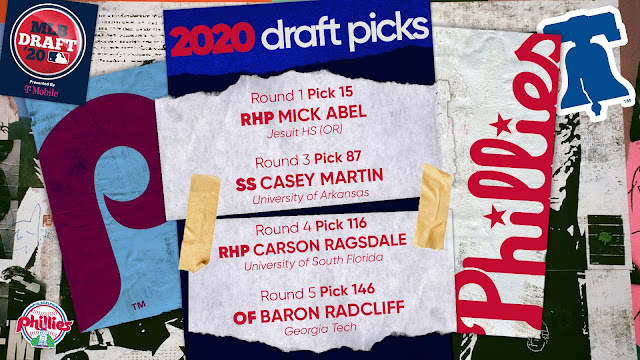 There were 40 rounds in the 2019 MLB Draft, and a total of 1,217 amateur players drafted by major league clubs.  Due to the pandemic, the 2020 Draft has been reduced to 5 rounds and 160 drafted players, some of whom hadn't been scouted since their junior year of high school.

Most of the experts seem to think that the Phillies had a successful draft.  Mick Abel was taken in the first round and is regarded by many scouts as the best high school pitcher in the draft.  The Phillies lost their second round draft pick due to the Zack Wheeler, but they got extremely lucky with their pick of Casey Martin in the third round.  MLB Pipeline had him ranked as the #30 best player in the draft, so getting him with the 87th pick overall was a steal.  Scouts are also pretty high on 6'8" pitcher Carson Ragsdale, who was taken in the fourth round.  Finally, in addition to having a name that sounds like a comic book super-villain, Baron Radcliff has drawn comparisons to Ryan Howard for his raw power.  I hope he makes it to the major leagues for his name alone.  You can just imagine hearing Dan Baker's voice echoing through Citizens Bank Park on that one. 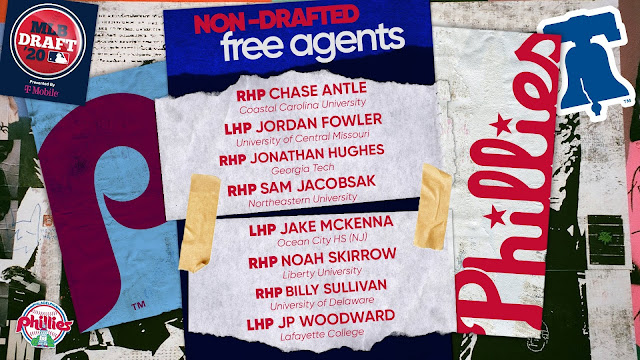 I know even less about the non-drafted free agents that the Phillies signed, but a quick glance at the list will tell you that the team is focused entirely on pitching.  Included in their signings are two ridiculously tall left handers: 6'7" Jake McKenna and 6'6" JP Woodward.

At this time, everyone except Mick Abel has agreed to a contract with the Phillies, and that agreement is very likely going to come within a couple of weeks.  What's far less certain is where these players are going to go.  With the disagreements between MLB and the MLBPA, and the recent Covid-19 outbreak at Phillies camp, the 2020 MLB season is looking like it won't happen.  However, while there is at least a chance of Major League Baseball this year, Minor League Baseball has seemingly fallen completely off of everyone's radar.  I would be extremely shocked if any of these kids play in a single minor league game with the organization until Spring 2021 at the earliest.  That's quite a long gap when you consider that the 2019 NCAA Baseball season ended on June 26th of last year and most high school baseball schedules ending even sooner than that.  From the outside, it seems like this will be the most difficult transition from an amateur to professional baseball career that players have seen in a very long time.