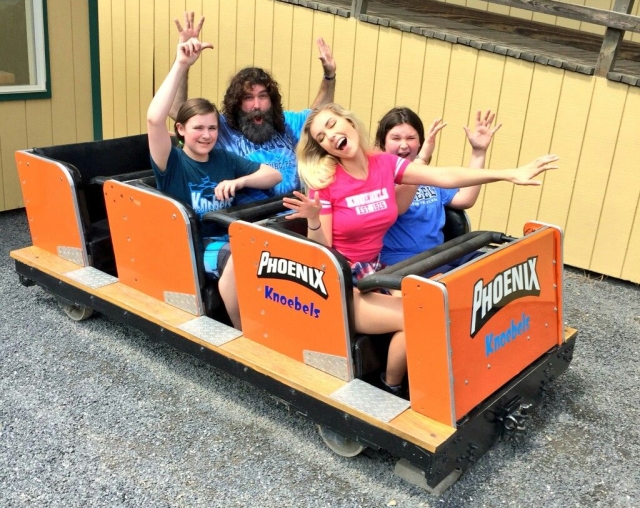 The Foley Family
Knoebels Amusement Resort - Elysburg, PA (2016)
WWE Hall of Famer Mick Foley is turning 55 years old today.  Four years ago, the former WWF World Heavyweight Champion celebrated his birthday with his wife and kids at Knoebels.  Their day at the park aired on the WWE Network reality show, Holy Foley.  In this photo, Mick and his three kids are sitting in the display car that is set up near the exit of The Phoenix roller coaster.

I met Mick at a meet-and-greet before a PPW Show in Hazleton five years ago.  He was a very nice dude.  He took a photo with me and signed my copy of his first two books.  I'm glad I met him in a situation like that instead of bumping into him at Knoebels.  As cool as it might be to meet one of my favorite wrestlers at my favorite amusement park, I know I wouldn't have approached him.  I'm sure the last thing he wants to deal with while he's enjoying a day at the park is being stopped every three feet to reminisce with nerds like me about the time that Undertaker threw him off of the cell.

Unfortunately, the pandemic has caused the opening of Knoebels this summer to be delayed until further notice.  I hope he's still getting some fudge.  Happy birthday, Mick!