The Cowboy Rides Away 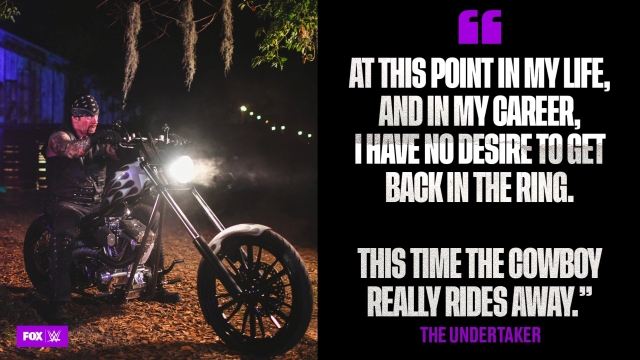 I was ten years old the first time I saw The Undertaker come to the ring at Survivor Series 1990.  I didn't see it when it happened on Thanksgiving night.  There's no way I was talking my family to dropping money on a wrestling pay-per-view, even if it did hold the promise of an Iraqi Sgt. Slaughter fighting The Bushwhackers, but I rented the Coliseum Home Video as soon as they had it on the shelves at Blockbuster.

When I saw a 6'10" grim reaper come to the ring and destroy "The American Dream" Dusty Rhodes, it blew my mind.  He was the coolest professional wrestler I have ever seen, before or since.  I never could have predicted that this performer would have the same effect on me at 39 years old when I watched him destroy "The Phenomenal" AJ Styles in the Boneyard Match at Wrestlemania 36.

On the final episode of The Last Ride series that documented his career, The Undertaker announced his retirement from professional wrestling.  It's hard to imagine anyone coming close to the incredible career that he's had.  Thank you for the memories, Mr. Calaway.