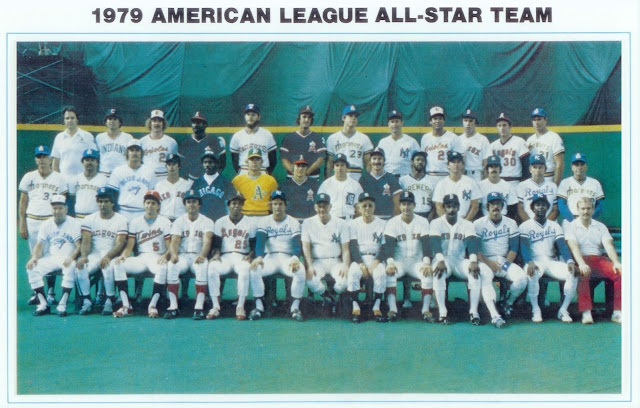 Reggie bounced around the American League throughout his career.  He is best known for his time with the Athletics and Yankees.  The five years he spent as a member of the California Angels are well known to fans of The Naked Gun, in which the right fielder is hypnotized into an attempted assassination of Queen Elizabeth.  He also spent a single year with the Baltimore Orioles after a salary dispute caused Oakland A's owner Charlie Finley to trade him before the start of the 1976 season.  Following that season, Reggie signed a five year deal with the Yankees, and was in his third season in New York when the 1979 All-Star Game was played, but you will not find him in pinstripes anywhere in this team photo that was taken 41 years ago.

Look closely at the second row.

The Hall of Famer, who bears a striking resemblance to my Uncle Tony, realized on his flight from Oakland that he had forgotten his uniform at home.  He frantically made phone calls from the airplane, which cost $5.00 per minute back in 1979, and made arrangements for someone to deliver his uniform to the Kingdome in Seattle where the All-Star Game was held.  Team photos were taken about two hours prior to the start of the game and Reggie was still without a uniform, so he borrowed one from the home team.  Thankfully, the Yankees uniform arrived before the start of the game, but this team photo lives on as a reminder of Reggie's very brief association with the Seattle Mariners.