Mario And Luigi Are Boomers 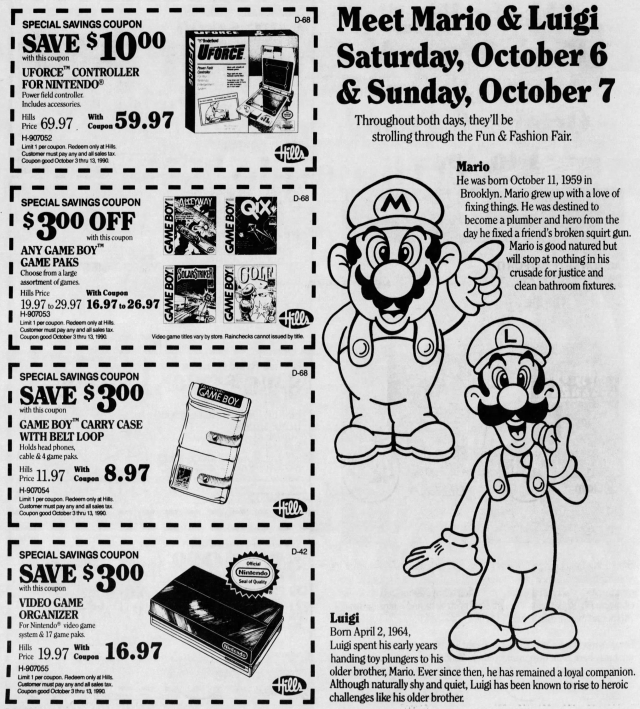 The Second Annual Hills Fun & Fashion Fair
Greater Pittsburgh Expo Mart (October 6-7, 1990)
You really have to give credit to Hills.  For a regional department store, they really went above and beyond with this mini-convention in Monroeville., complete with television stars, professional athletes, games and contests.  They also recognize that no family event is complete without costumed characters for the kids. The Nintendo Game Boy has been released the previous summer, and the NES was still selling well, so Mario and Luigi were a natural fit for the event.

Here's where it gets interesting: the ad for their appearance at the Fun & Fashion Fair includes the plumbers birthdays.  According to Hills, Mario was born on October 11th, 1959 and is four and a half years older than his little brother, Luigi, who was born on April 2, 1964.  I don't know if this was ever canon we, but if it was, it had changed five years later.  Super Mario World 2: Yoshi's Island is the first time I know of that the Super Mario Bros were presented as fraternal twins.  The fact that they're twins was confirmed by no less of an authority than the late Satoru Iwata, but I'm still curious to know the origin of the 1959 and 1964 birthdays from this advertisement. 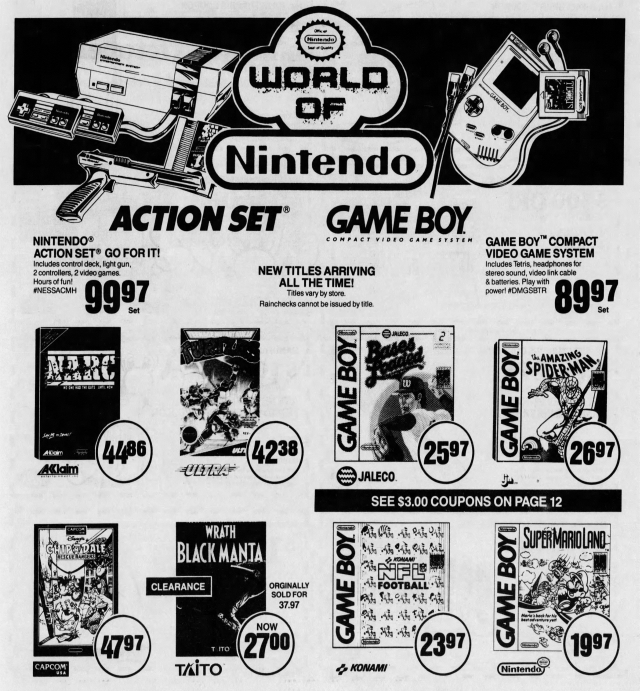 These were the games that listed in the Hills flyer for the Fun & Fashion Fair.  My favorite ones out of this lot are Super Mario Land for the Game Boy and Chip N' Dale Rescue Rangers for the NES.  Capcom Disney games on the NES were pretty incredible, especially at a time when most games of licensed properties weren't all that great.  The Teenage Mutant Ninja Turtles game is fun if you have a Game Genie, but it is punishingly difficult. 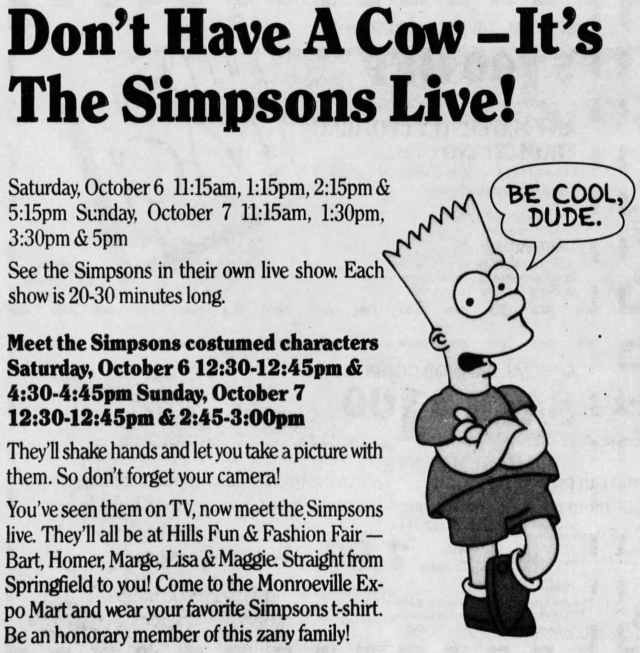 This has me even more intrigued than Mario and Luigi's birthday.  The Simpsons debuted on December 17th, 1989, so this event took place at the height of The Simpsons craze, just before the start of Season 2.  I can't imagine what a 20-30 minute live show of actors in Simpsons costumes would look like in 2020, let alone back in the fall of 1990.  Maybe someone will discover a VHS tape from someone's home video camera one of these days. I hope so.  I'm dying to see this! 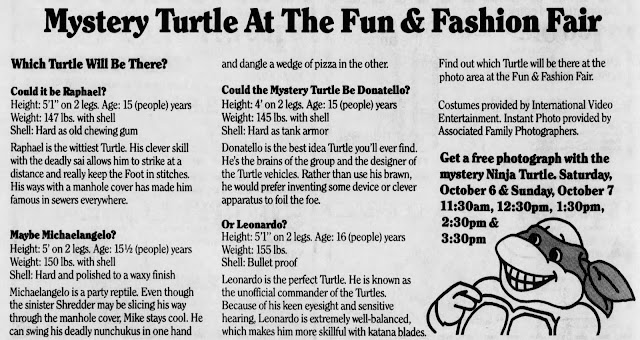 I guess they were only able to get one Teenage Mutant Ninja Turtles costume in time for the Fair.  At any rate, marketing the event as featuring a "Mystery Turtle" is a pretty ingenious way to turn a negative into a positive.

Upon closer inspection, the end of the ad may be a clue to why they were only able to have one of the Turtles.  It mentions that the costumes are being provided by International Video Entertainment - the film studio behind the 1990 Teenage Mutant Ninja Turtles movie.  This suggests that the Turtle costume wasn't just an ordinary plastic Halloween costume, but the real deal from Jim Henson's Creature Shop that was used in the film, and you could bring your kids to have their photo taken with the Turtle for free.  Pretty sweet deal if you ask me! 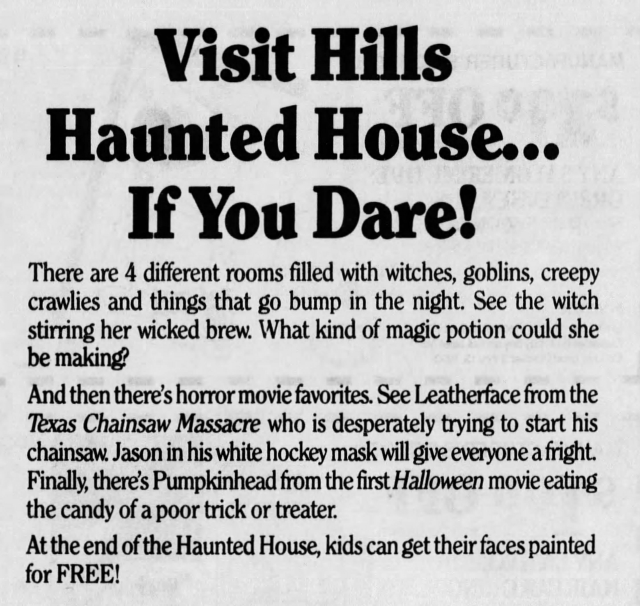 It seems like this event was hell bent on hitting all of my nerdy obsessions.  Not only did they have a haunted house, but it included Leatherface, Pumpkinhead and Jason Voorhees!  Good lord, the 10 year old me would have been in heaven.  Who am I kidding?  I'm 40 and I'd be all over this like a great big nerd if it were happening right now. 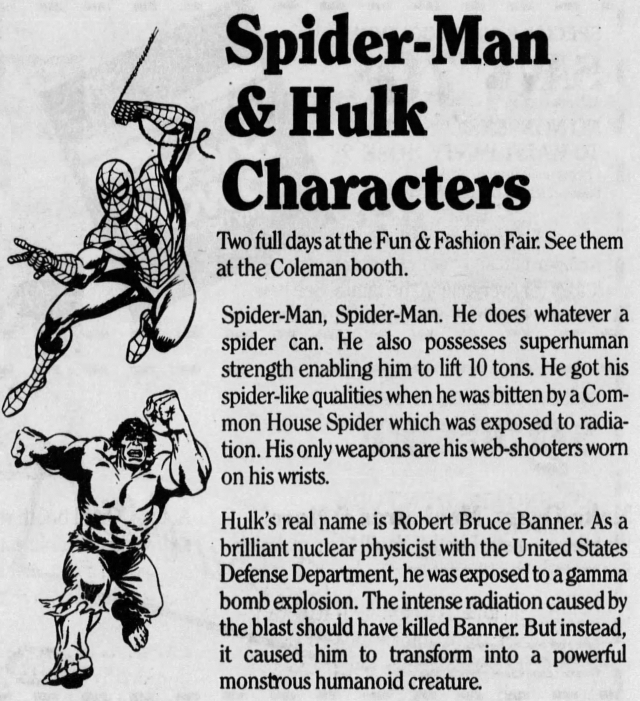 Ok, let's add it up.  This event had pro wrestlers (including Randy freaking Savage!), the Simpsons, the Teenage Mutant Ninja Turtles, Nintendo games, horror film icons AND comic book superheroes?!  I think if you had given me a choice back in October 1990 to go to Disney World or to this free retail fair hosted by a regional department store chain, I would gone with the latter and had zero regrets.  Seriously, you have to admire the effort they put into this.  This wasn't hosted by some huge global conglomerate with money to burn.  This was Hills - a small chain with most of their stores spread across five states.  We had a Hills in Hazleton.  In fact, my mother used to work there when I was very young.  It was a great store with an awesome snack bar, but I didn't appreciate just how cool these folks were to do something like this.  You've really got to hand it to them.  You don't see things like this too often these days, even before the pandemic.

I'll close with a few of the coupons from the flyer that struck my interest.  If you want to see the whole thing, you can find it through this link to Newspapers.com, but you'll need a subscription to see the whole thing.  It's a service worth subscribing to.  I've spent many hours happily digging through the archives to look up things from my hometown, or my family, or from movie and video game releases.  Check it out if you're so inclined.