The Stars Of David 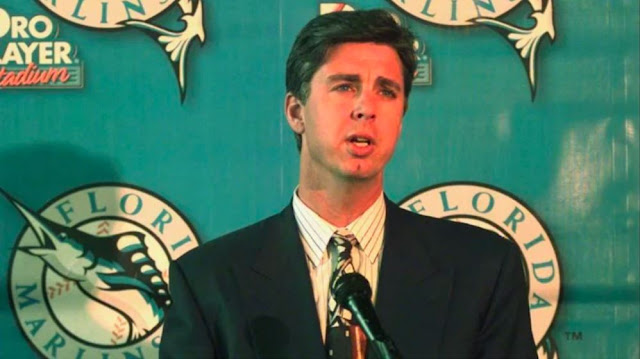 Dave Dombrowski
Philadelphia Phillies President of Baseball Operations
This past Friday, the Phillies announced that they have hired Dave Dombrowski to serve as the President of Baseball Operations.  I'm not entirely sure how I feel about this hiring.  While it is true that his time as General Manager and/or President of the Expos, Marlins, Tigers and Red Sox have resulted in 9 playoff appearances, 4 pennants and 2 World Series Championships, he has also earned a reputation of signing players for ridiculous sums of money in bloated, long term contracts that financially handcuff the teams who are stuck paying for them. 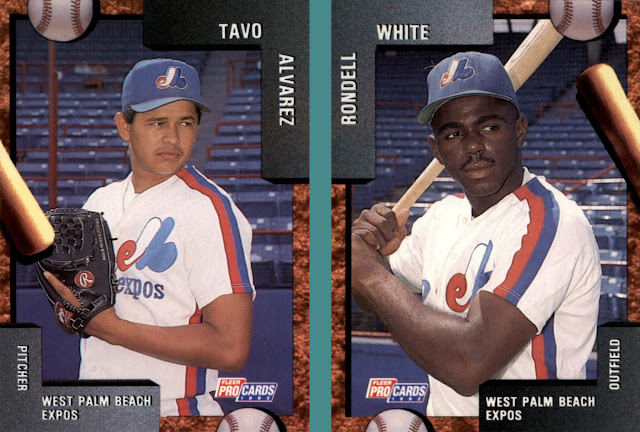 My experiences of Mr. Dombrowski as a fan of the sport began when I was 11 and 12 years old.  I lived with my dad, stepmom and stepsister in South Florida in the early 90's.  Dad and I went to a lot of ballgames together in those years, which included our local Florida State League minor league club, the West Palm Beach Expos.  The team had two superstar prospects that fans were especially excited to see: outfielder Rondell White and pitcher Tavo Alvarez.  Although I didn't know it at the time, both players were drafted by Montreal Expos general manager Dave Dombrowski. 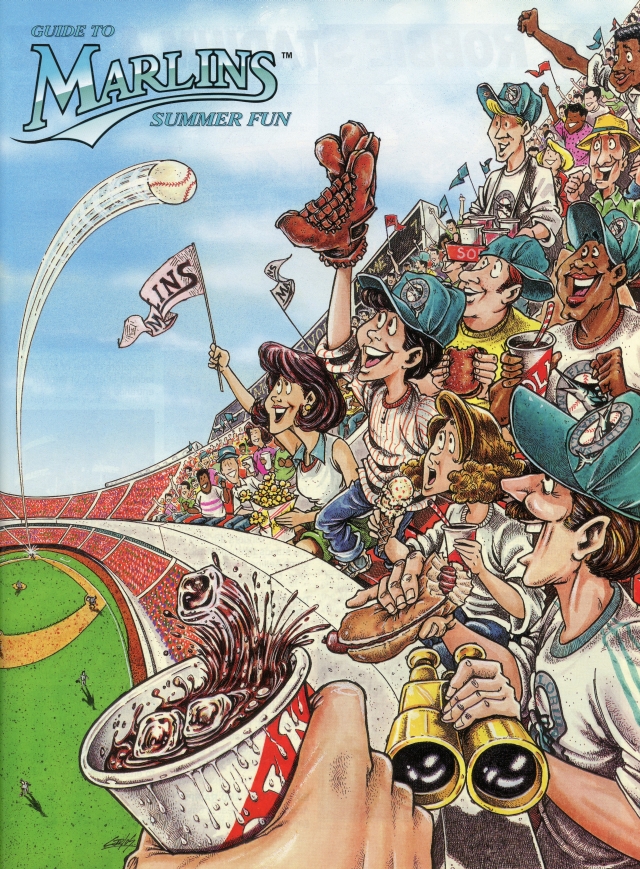 In what must have been a dream come true for a young baseball executive, Mr. Dombrowski was hired to be the first general manager of the expansion Florida Marlins club in September 1991.  This gave him the opportunity to build a team from scratch, including the manager, the coaching staff, the scouting department and, of course, the 1992 Expansion Draft.  I still remember watching the Expansion Draft with my dad on ESPN and watching as the Marlins and Rockies went from being just a couple of logos in the newspaper to full Major League Baseball clubs with a roster of players, some of whom we had actually heard of. 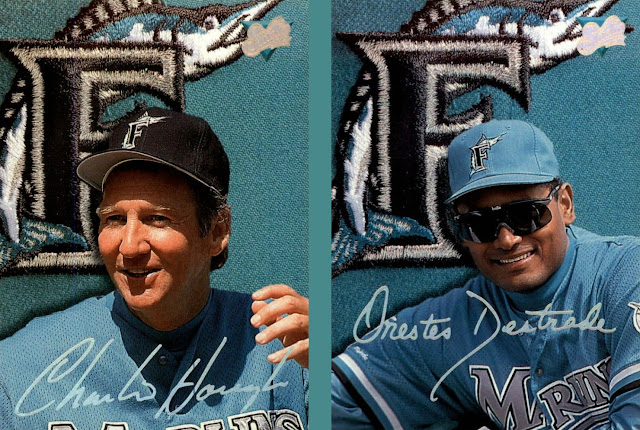 I was a 12 year old living in South Florida during the '92 Expansion Draft and the first half of the Marlins inaugural 1993 season.  I was then, and am still, a fan of the Phillies, but as a young kid, I was a bit more of an equal opportunity fan of the game itself.  I rooted for players like Nolan Ryan, Frank Thomas, Ken Griffey Jr, and even division rivals like Bobby Bonilla and Ozzie Smith.  I don't know if I'd go so far as to say I was a Marlins fan back then, but I definitely paid very close attention to them, and I rooted for them to win unless they were playing the Phillies.  In the months leading up to the 1993 season, I obsessively read any information I could find about the Marlins.  The most notable news was when Dombrowski signed two former All-Stars in catcher Benito Santiago and knuckleballer Charlie Hough.  He also took Miami Hurricanes catcher Charles Johnson in first round of the '92 amateur draft and lured slugger Orestes Destrade back to the United States from Japan. 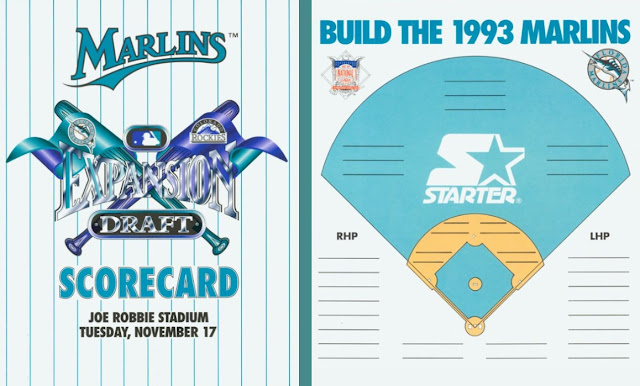 They also took a number of players in the Expansion Draft who became household names for South Florida baseball fans in the early 90's, including Blue Jays prospect Nigel Wilson, Angels veteran pitcher Bryan Harvey, speedy outfielder Chuck Carr, the man who would go on to be known as Mr. Marlin, Jeff Conine, and future Hall of Fame closer Trevor Hoffman.  I went to two games in '93 where I saw Hoffman pitch for the Marlins (May 19th vs the Phillies and June 11th vs the Pirates).  Of course, none of us knew that we were watching the rookie season of a legend, but Dave Dombrowski must have saw something in the young pitcher.  In a move that would become characteristic of the GM, he traded Hoffman and two other prospects to the Padres for slugger Gary Sheffield in late June during the '93 season.  Sheffield would be a key to the Marlins to become the fastest team to go from an expansion ballclub to a World Series Champion in 1997.  It would be difficult for anyone to argue that the trade wasn't worth it, but Hoffman would go on to have a Hall of Fame career as one of the most dominant closers in the history of the game. 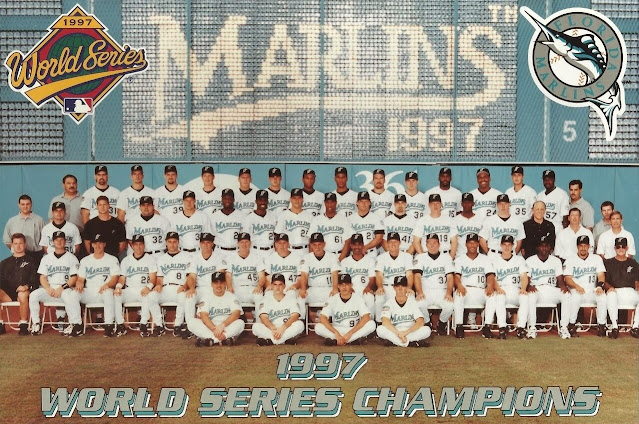 I rooted for the Marlins in '97 after Darren Daulton was traded to the team.  Dutch wasted no time in becoming a clubhouse leader, both on and off the field.  He dominated in the post season, batting .364 against a very tough Braves and Indians team in the NLCS and World Series.  In what would be the final games of his career, Daulton played in all seven games of the World Series, going 7 for 18 with a home run and two RBI.  While I was very happy to see the Phillies legend end his career with a World Series ring, it marked the end of my time following the club.  I was back in Pennsylvania, so I wasn't going to games in Miami anymore, and with Daulton retiring after the '97 season, the last remaining reasons I had to keep a close eye on the team was gone.  Unfortunately for Marlins fans, the team's owners felt the same way.
Almost immediately after the 1997 World Series, Dave Dombrowski was ordered to trade away all of the team's expensive talent seconds after the last piece of confetti fell from their championship parade.  It really was a shame for the city, because they took a golden opportunity to turn Miami into a true baseball city and flushed it down the toilet.  However, none of the blame for this could be placed on Dombrowski. 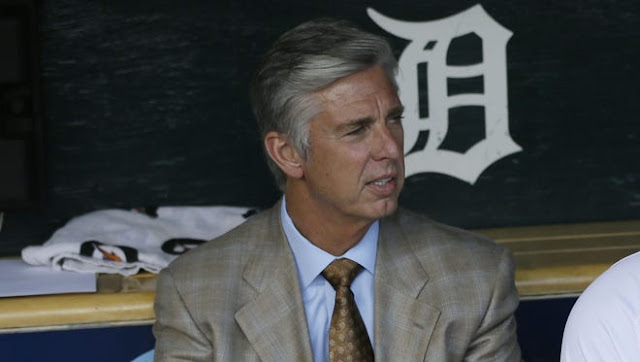 The Marlins would go on to win another World Series in 2003 around a core of young talent that Dave Dombrowski acquired in the fire sale after the 1997 Championship Season.  However, by this point, the Marlins first general manager had moved on.  After the 2001 season, Dombrowski accepted a position as the President and CEO of the Detroit Tigers; a position he held for fourteen years.
In his time with the Tigers, Dombrowski oversaw the drafting of Justin Verlander, Cameron Maybin, Andrew Miller and Rick Porcello.  He quickly flipped Maybin and Miller to the Marlins for Miguel Cabrera and Dontrelle Willis.  The Marlins ace fizzled out in the American League, but Cabrera developed into one of the greatest players of his generation, winning back-to-back AL MVP awards in 2012 and 2013.  His 2012 season was other worldly as he became the first AL Triple Crown winner since Carl Yastrzemski in 1967, and the first non-outfielder to win a Triple Crown since Lou Gehrig in 1934.  Dombrowski also fleeced the rest of the league in lop sided trades that brought Placido Polanco and Edwin Jackson to Detroit.  A year after acquiring him from the Rays, he flipped Jackson (with Curtis Granderson) for Max Scherzer and Austin Jackson.
In his tenure with the Tigers, Dombrowski took a team that had reached the playoffs four times in a 60 year span (from 1946 to 2005) and built it into a perennial contender that finished on top of the AL Central for four consecutive seasons (2011-2014).  His Tigers reached the Playoffs five times, including two World Series appearances (in 2006 and 2011).  He may have thrown around some ridiculous money (including the Prince Fielder contract), but his time in Detroit could be called nothing short of a miraculous success by any objective measure. 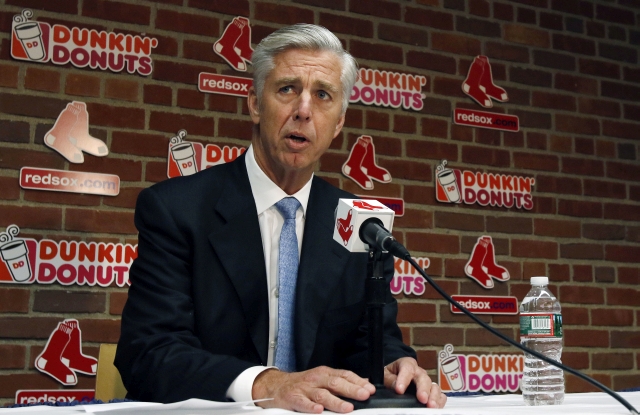 Dombrowski was named the President of Baseball Operations for the Boston Red Sox in August of 2015 - two weeks after he was let go by the Tigers.  He got to work quickly by trading for Chris Sale before the 2017 season and signing JD Martinez before the 2018 season, both of which were keys to the Boston Red Sox 2018 World Series Championship.
However, it hasn't all been historic turnarounds and World Series parades for the Mr. Dombrowski.  This is, after all, the man who traded Randy Johnson the year after his rookie season from the Expos to the Mariners in exchange for one year of Mark Langston.  He also traded a young Jair Jurrjens from the Tigers to the Braves for a one year rental of Edgar Renteria.  However, the real eyebrow raising moments have come when he spent a ridiculous amount, in dollars and in years, to a trio of Red Sox pitchers: David Price (7 years, $217 million), Nate Eovaldi (4 years, $68 million) and Chris Sale (5 years, $145 million).  The Prince Fielder contract also is a cause for concern.  Before the start of the 2012 season, he was signed to a nine year, $214 million dollar contract.  Dombrowski got out from under that disastrous contract by trading Fielder to the Rangers for Ian Kinsler, but it stands as one of the worst contracts in the history of the game.  The Rangers released Fielder after the 2017 season, and he's being paid top dollar to sit at home for three seasons (2018 through 2020). 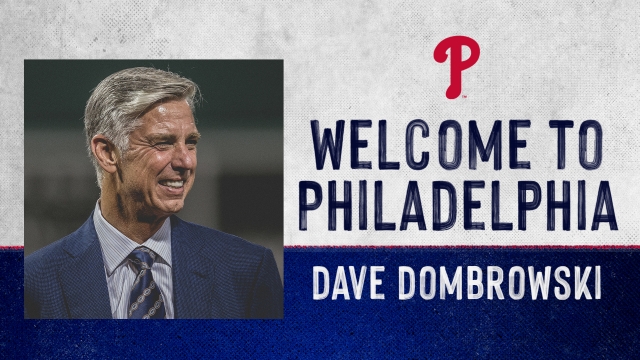 So, now he's in Philadelphia.  I don't know what the future will hold for a Phillies team that seemed hell bent on cutting salary as we enter 2021, but one thing is for certain.  They hired a President of Baseball Operations who is not know for sitting on his hands.  The executive that will steer she ship for the next four seasons is known for bold, impactful moves.  Whether he can take the Phillies to the World Series as he did his previous three teams remains to be seen, but there's reason to be optimistic in the City of Brotherly Love as we move forward.