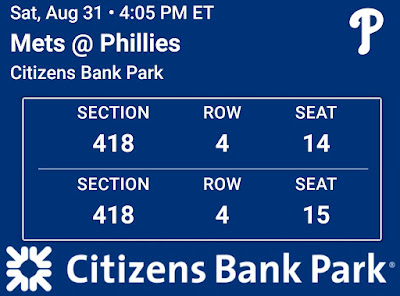 These tickets were a free perk for members of the Fightin' Phils Fan Club.  I highly recommend it.  For $25 bucks a year, you get access to stream all of the Phillies radio broadcasts for the season, 10% off your purchase at Phillies.com and two tickets to a game during the season.  It's a pretty good deal, even if the Phillies have a pretty rough game, which is exactly what happened earlier today. 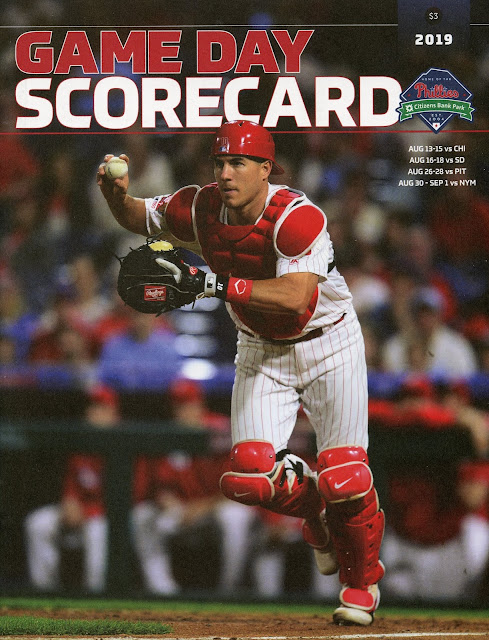 Jason Vargas entered the game in search of his first win since being traded from the Mets to the Phillies on July 29th.  He didn't have a lot of success facing his old team for the first time.  After a two run double by Joe Panik extended the Mets lead to 5 - 1 in the top of the 5th with no outs, Vargas was pulled from the game.  If there was any good news in this game, it was the bullpen.  Blake Parker came on in relief of Vargas, got out of the 5th with no further damage, and pitched a scoreless 6th.  His delivery to the plate is amusing.  He starts in a crouch, then stands and wiggles between 8 - 12 times (I counted) before throwing the pitch.  It looks like he's from Street Fighter Alpha and he's charging up his special move.  Hell, if he can come on in relief and throw two scoreless innings every time, he can wiggle all he wants.

Ranger Suárez was a little shaky, giving up a single and allowing the runner to advance to second on a balk, but he got out of the 7th inning intact.  He was pulled in the 8th after Rajai Davis reached first base thanks to a horrendous throw by Jean Segura, who was a defensive disaster for most of the game.  This brought in Jared Hughes, who did his customary run at top speed from the bullpen to the mound before pitching a scoreless 8th. 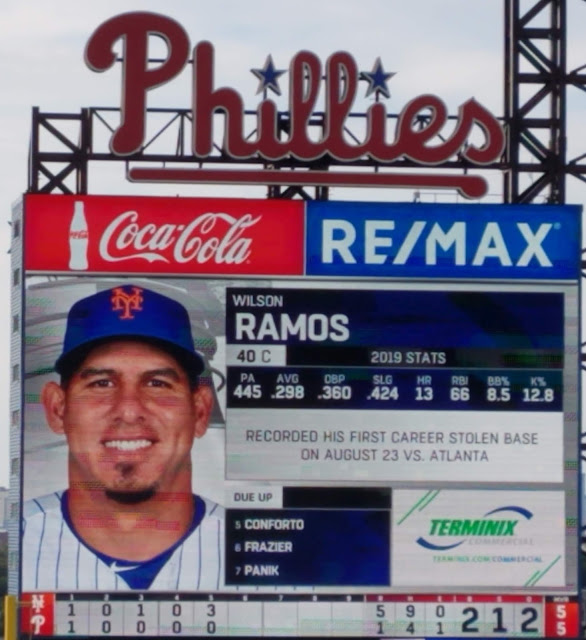 José Álvarez came on in the top of the 9th and immediately gave up a double to former Phillie Wilson Ramos, who had a hell of a game for the Mets.  He went 4-5 with an RBI single in the 1st and he extended his hitting streak to 24 games and concluded a month in which he hit .455.  That's damn impressive, especially when you consider the fact that he's a big guy who has to really bust his ass down the line to get an infield single.  I'm beyond happy with J.T. Realmuto, but I liked Ramos a lot last year after we acquired him from the Rays, and I wish he could have played a role on the 2019 Phillies.  The Ramos double was followed up by singles from Michael Conforto and Todd Frazier which scored another run to make it 6 - 3 with no outs.  Thankfully, Álvarez settled down and retired the next three batters.

The Phillies offense started out well.  Jean Segura led off the game for the Phillies with a triple, and he scored on a Bryce Harper ground out to tie the game at 1-1 in the bottom of the first.  Segura and Harper each had two hits on the night, as did Cesar Hernandez and Scott Kingery, who moved from center field to third base in the 5th inning when Sean Rodríguez was taken out of the game.  Rodríguez is still getting booed after his comments about some of the more negative fans at the ballpark.  Honestly, after hearing what he had to say, I don't disagree with him.  I've been a Phillies fan for as long as I've known what baseball is, but I can't help but to be a little envious of places like Boston, where fans got behind Shane Victorino when he was having a rough year, and they sang back in a chant of "every little thing's gonna be alright" for each of his at bats.  People forget that Shane came out to Bob Marley's Three Little Birds when he was a Phillie, years before he ever suited up for the Red Sox.  However, when people look back on his career decades from now, will their first memory be his transformation from Rule 5 pick to 2008 World Series Champion?  Will they remember how the Flyin' Hawaiian was beloved in Philadelphia?  Of course, but the first thing they're likely to remember is the magic of his three years in Boston.  Why?  The fans...plain and simple.  The fans make the difference.  Philly fans are passionate, but our passion far too often takes a negative tone, like an abusive parent.  Boston fans are passionate and supportive.  I hope we can be too. 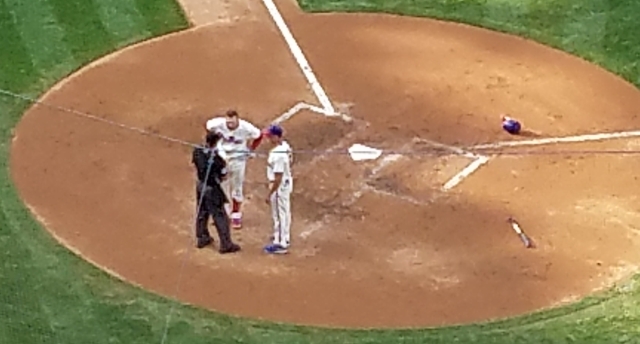 Bryce Harper made some pretty decent catches in right field and had a good day at the plate, including his 29th home run of the season.  His other hit was a single in the bottom of the 3rd, which he followed up with a stolen base with Rhys Hoskins at the plate.  Hoskins has looked like he's chasing walks since the All-Star break (which I blame on the coaching staff's poor interpretation and overuse of analytics), and it has led to the worst slump of his career.  He seemed to be turning things around over the past few games now that Charlie Manuel is working with him, but today was not one of his best moments.  He struck out to end the 3rd, and to his credit, the pitch was definitely high and a little inside and should have been called a ball.  However, Hoskins, who has developed a reputation for arguing with umpires, spiked his helmet at the plate and was ejected from the game for the first time in his career. 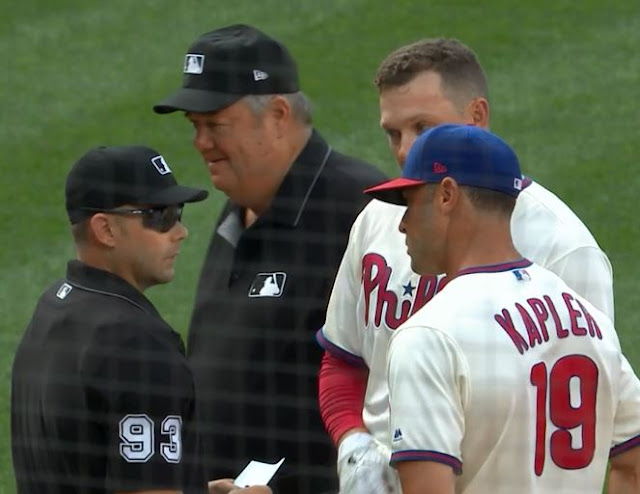 Hoskins stood at home plate arguing with the umpire while the Phillies were trying to honor a World War 2 hero between innings, which made the situation all the more embarrassing.  Eventually, "Cowboy" Joe West waddled over from first base with a Cheshire Cat grin to lead the hotheaded first baseman back to his dugout.  I like Hoskins a lot.  He's been one of my favorite Phillies since they called him up in late 2017, but he's got to keep his temper under control.  Getting tossed in the third inning won't win any ballgames. 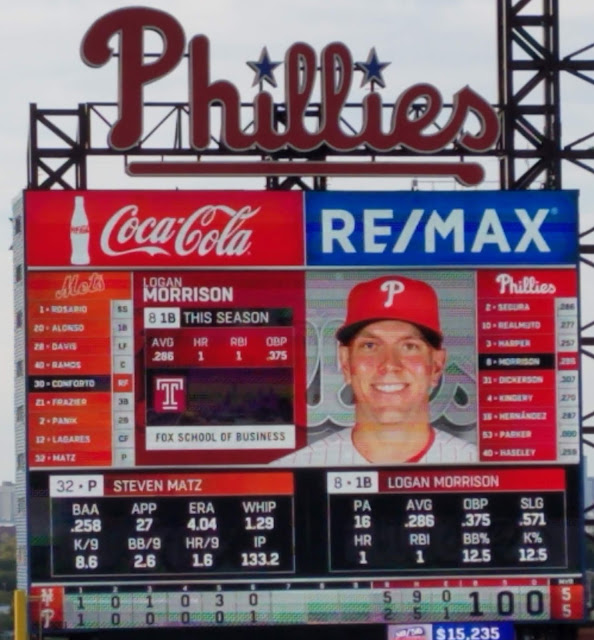 Logan Morrison came into the game at first base to replace Hoskins.  He didn't get a hit, but he reached first base on a fielding error in the 6th right after Harper's home run.  It started a rally that followed with singles from Corey Dickerson and Scott Kingery to load the bases with no outs.  Cesar Hernandez lined out, but Andrew Knapp was brought in to pinch hit for the pitcher drew a bases loaded walk from Luis Avilán to score the Phillies third run.  With bases loaded and only 1 out, you have to expect the Phillies offense to capitalize off of the Mets bullpen.  Unfortunately, rookie Adam Haseley grounded into a double play to end the inning and to end what was the Phillies best chance to break open the game.  They wouldn't score again for the rest of the night.

It was a tough loss in the middle of a wild card chase, and it was made more demoralizing by the large amount of New York fans in attendance who managed to get "Lets Go Mets" chants going at several points during the game.  The Phillies fans quickly drown them out with boos each time, but it's a far cry from earlier in the season when the Bamboo-inspired Phillies were sweeping the Mets.  Now, they'll have to win tomorrow against Marcus Stroman to avoid being swept at home. 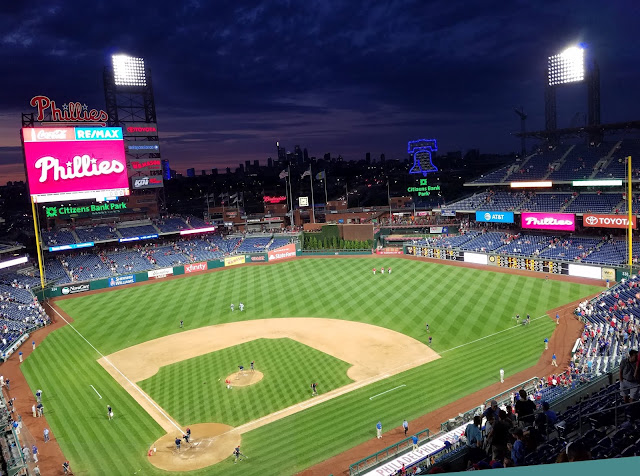 On a positive note, the weather was absolutely beautiful - maybe the most pleasant of any game I've ever attended in Philadelphia.  I also was able to ask Greg "The Bull" Luzinski to sign an 8x10 of a photo that my dad and I took with him earlier this season on July 14th.  As he signed it, I told him I was born in the summer of 1980, and I sat on my dad's lap as a baby and watched him and the Phillies win the World Series.  I'm going to have this photo framed with the ticket stub from that night and give it to my dad for Christmas.  Thankfully, he doesn't visit my blog and probably doesn't even know I have a blog, so the surprise won't be spoiled. 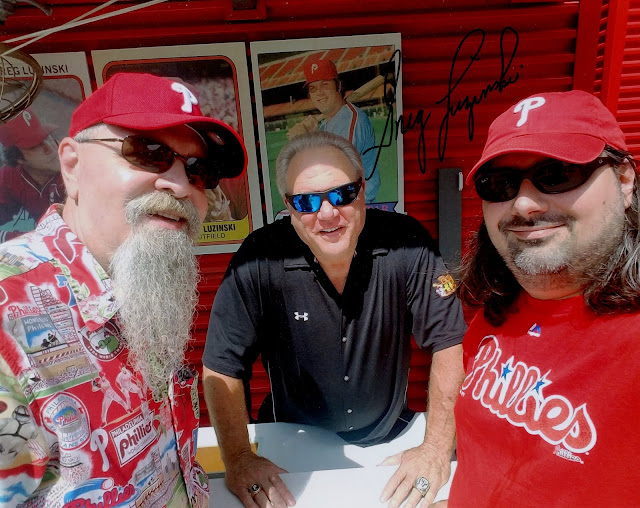