Godzilla vs Gigan
Mahoning Drive-In - Lehighton, PA
When I was seven years old, my mother and I lived in an apartment on First Street in Hazleton.  Our neighbors were the Zapotocky family, and we spent a lot of time hanging out with them.  Their son, Dominic, was a few years older than me and he taught me a lot about baseball and baseball cards.  His father (who everyone called "Zap") introduced me to Godzilla.  There was a shelf on his entertainment center below the VCR where he must have had a dozen Godzilla tapes which he would watch from time to time, and from the moment I first saw the King Of The Monsters, I was hooked.  This was awesome! 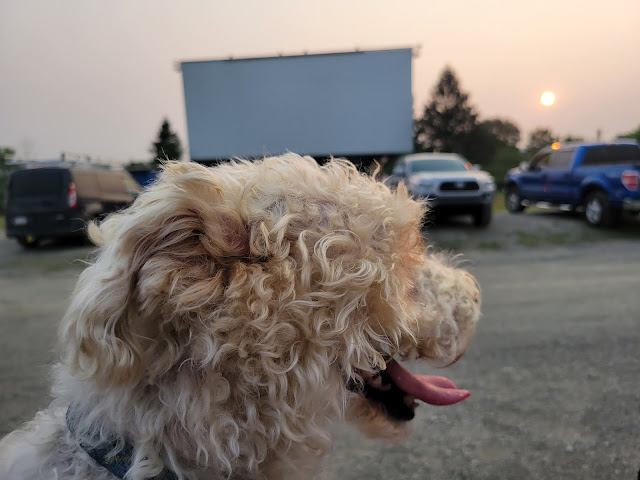 The screening of Godzilla vs. Gigan at the Mahoning Drive-in was a surreal experience for me.  It was very well attended, but it felt almost empty after the thousands of members of the Mutant Fam that were here for Joe Bob's Jamboree last weekend.  We didn't bring Harvey to the Jamboree because he tends to get restless around big groups of people, but Tunnel Vision Tuesdays are great to bring my furry little friend to the drive-in.  It's a single feature night, so he doesn't mind curling up on my lap for a few hours - especially when he gets to steal the occasional chicken finger or spoonful of mac n' cheese. 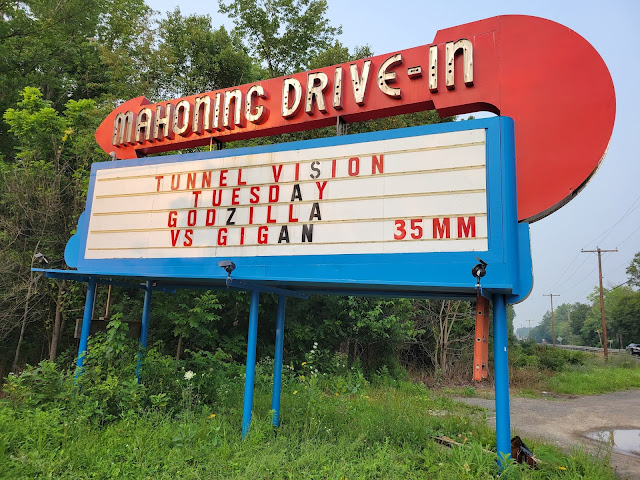 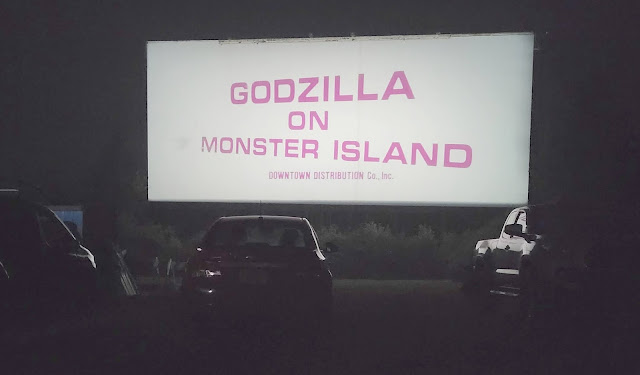 As usual, the Mahoning was screening an original 35mm of the movie.  Tonight's feature was the English language version of Godzilla vs. Gigan, which went by the title Godzilla On Monster Island.  It's a strange name for the American release because the plot really doesn't have anything to do with Monster Island.  However, it is the setting of a hilarious conversation - in English - between Godzilla and Anguirus.  Yes friends, Godzilla speaks in this film, and it is glorious!
This is one of my favorite Godzilla flicks.  The story centers around World Children's Land, a theme park that has been built by cockroaches from outer space who have come to our planet disguised as humans.  Their mission is to lure Gigan and King Ghidorah to Earth so they can destroy civilization and move their species here to rise from its ashes.  Another weapon in their arsenal is Godzilla Tower, an office building that has a giant Godzilla statue clinging to its side.  Little do our heroes know that this Godzilla statue shoots lasers from its eyes.  Thankfully for the Earthlings, Godzilla and Anguirus swim in from their home on Monster Island and send the evil monsters packing while our human heroes, led by an intrepid Manga artist, take on the diabolical cockroaches in disguise.
Godzilla vs. Gigan was released in Japan in 1972, and made it to American theaters in 1977.  It is the last Godzilla film in which the title character was played by Haruo Nakajima, the actor who donned the Godzilla costume in the original 1954 film.
Before the feature, Virgil took a moment to thank the fans of the Mahoning Drive-in for their efforts to save the theater and oppose the project that would have seen it torn down to build a solar energy farm.  I know it may seem a little silly, but I wanted to preserve that moment here, just as a reminder of how close we came to losing this incredible place, and how important it is that we appreciate the things in our life that bring us joy and happiness. 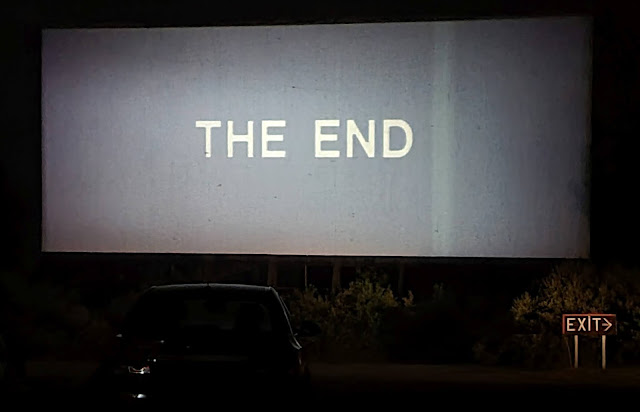 And since I recorded the intro to the film, I figured I might as well record the message that sent us all home at the end of the night.  That's pretty much what this blog is about - preserving the memories that get lost in the shuffle of our daily lives.  Some of them are big things.  Some of them are ordinary things that I have learned to not take for granted.  I know as I sit here today that I'm going to experience this theater many more times in my life.  Hell, I'll be back on Friday!  But life has a way of pulling the rug out from under us, or changing so gradually over time that you don't realize how different the world around you has become until it is unrecognizable to the one you once knew.  We rarely recognize when we're experiencing something for the very last time.  So, before that happens, I like to preserve those ordinary, everyday things while we're still in the moment, just in case.