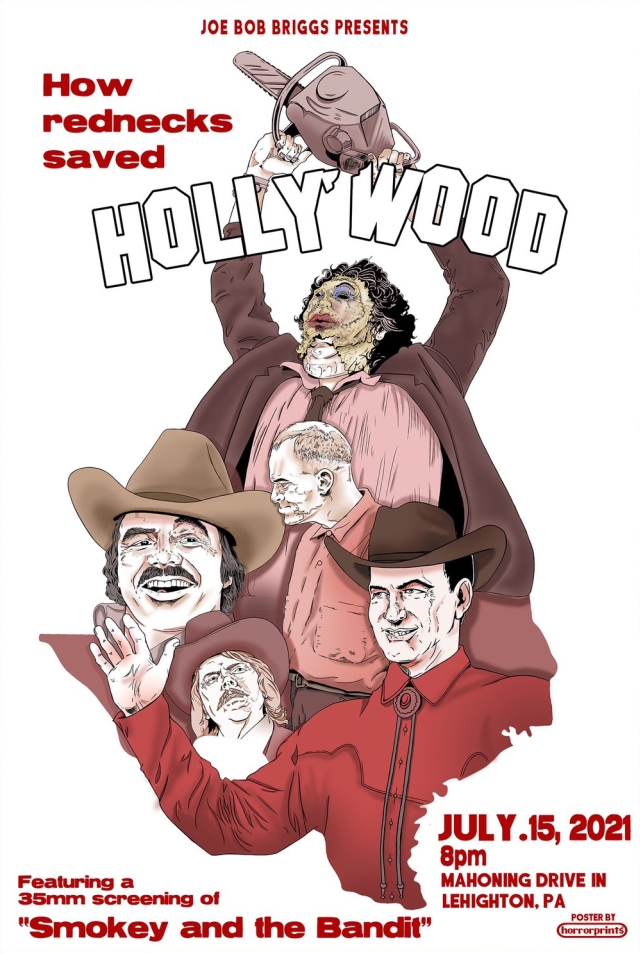 How Rednecks Saved Hollywood with Joe Bob Briggs
Mahoning Drive In - Tamaqua, PA
This is a show that I've been looking forward to seeing for a long time.  When they announced that they were adding an extra day to Joe Bob's Drive-In Jamboree this incredible flyer and poster from Horror Prints, I knew I had to be there.  We had no idea at that time that a dark cloud was hanging overhead that is threatening the future of the wonderful and historic Mahoning Drive-In.  Thankfully, while we were in line waiting to get in, we saw a video message from Virgil that may go down as the Gettysburg Address for the Mahoning Drive-In.
This completely set the tone for the rest of the day.  Not only is the Mahoning Drive-In safe from being torn down to build a solar energy farm, but the property owner is in negotiations to sell the land that the drive-in has occupied since 1948 to the owners of the drive-in.  The rally that was scheduled to take place on August 2nd will now be a celebration of the drive-in and the efforts of its staff and fans to keep this incredible place thriving for many years to come. 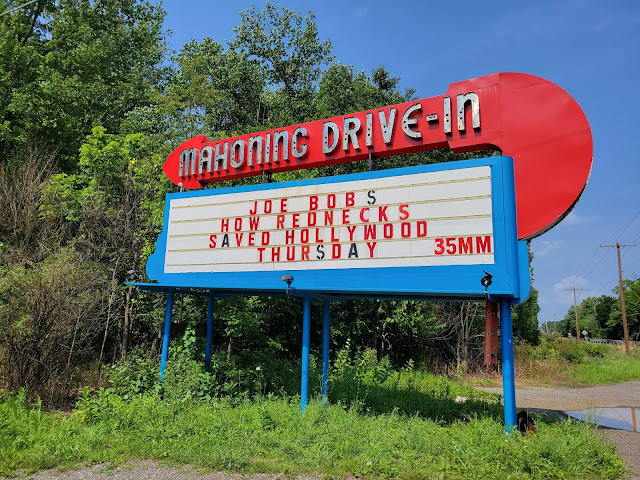 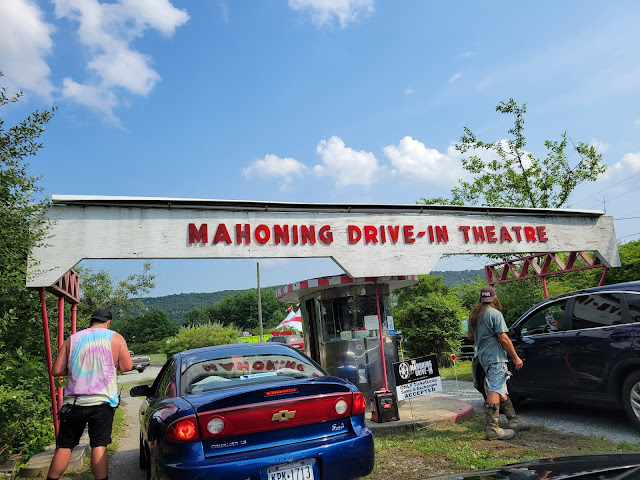 The vibe in this place is incredible on an ordinary day, but I can tell you that it was off the charts today.  This week has been an emotional roller coaster - first with anticipation of the Jamboree, then with heartbreak at what seemed to be the inevitable closure of our beloved drive-in, which was followed by pure joy and elation when we learned that the threat was over and the Mahoning is here to stay. 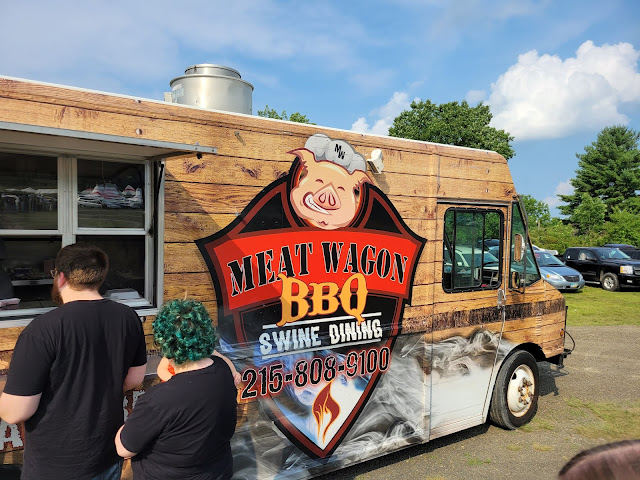 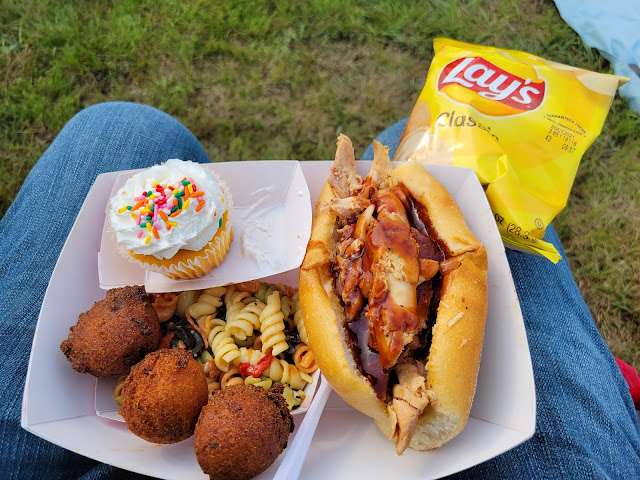 Once we checked in, we found a good spot to park in front of the screen.  Next, we set up our lawn chairs by the stage, and hit up the Meat Wagon BBQ food truck.  I had chicken barbecue with pasta salad, hush puppies, chips and a cupcake.  All of this was included with our tickets, and everything was delicious.
We brought the food back to our lawn chairs, and while we were having dinner, I noticed that Joe Bob was a few yards away being interviewed by a local tv news team.  I saw that they had cameras set up, but I figured it was for the people they were interviewing.  What I didn't notice until after I saw the news broadcast is that they were also doing crowd shots, so there is a lovely video of me on the morning news stuffing my face with pasta salad.
After finishing dinner and unknowingly making my debut on PAHomepage.com, I headed for the merch tent to pick up the show poster, and to a line to meet the great Joe Bob Briggs.  He was incredibly kind.  He signed the poster and talked with us for a few minutes about the Wild West City park where we first met him.  He also took this picture with us, in which I'm happy to say I look slightly better than I did with a face full of pasta salad. 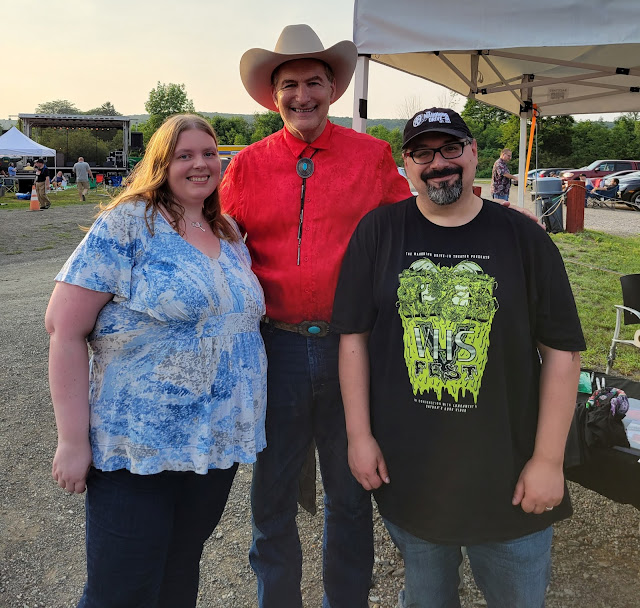 While we were in line, we met up with Tyler.  He's one of the dudes who I've gotten to know through the group conversations on Twitter during The Last Drive-In on Shudder.  He came to the Jamboree from Tennessee (hey, that rhymes!), and he's a very cool dude.  Soon afterward, we met up with Jow, who came down from Connecticut and is working as The Mutant Fam correspondent at the Jamboree, and Gerald, who made the trip from Michigan.  As anyone who knows me can tell you, I'm pretty awkward when it comes to making friends (more so when I'm sober).  The anxiety gremlins mess with me sometimes, but these guys were awesome and getting to hang out with our new friends made the experience truly memorable.
We settled in at the spot we staked out on the lawn under the big screen and to the left of the stage that Joe Bob was presenting on. 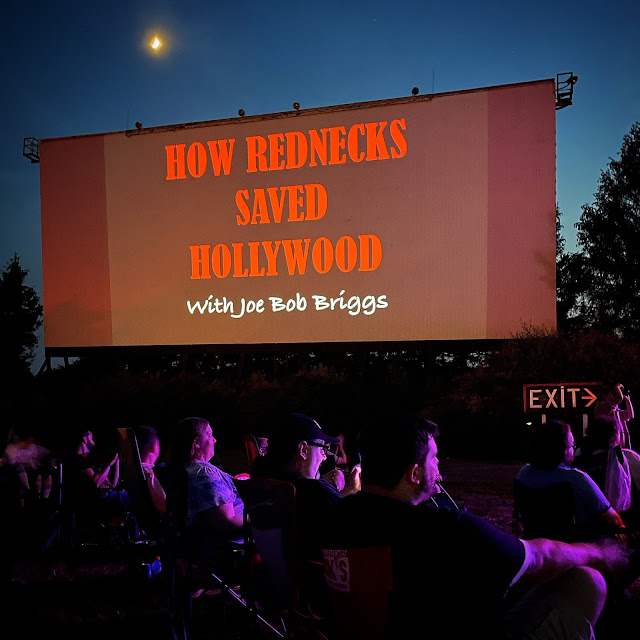 After the show, I found this incredible photo on Twitter that was taken right at the start of Joe Bob's presentation of How Rednecks Saved Hollywood.  It was taken by a very cool woman named Angie (different Angie - not my wife).  She and her husband were set up right behind us on the lawn.  They were two of the first folks we talked to when we arrived and were super freaking cool.
This picture really captures the night perfectly for me.  From left to right, you can see Gerald, Angie, myself, and Tyler relaxing in our lawn chairs as the show was about to begin.  If life was a video game, this is one of the save states I would have keep and replay over and over again through the years. 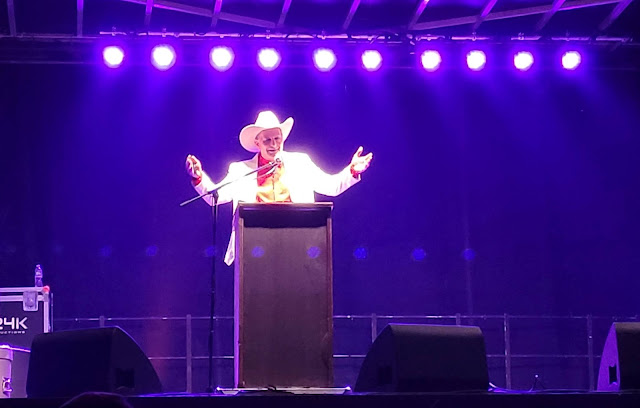 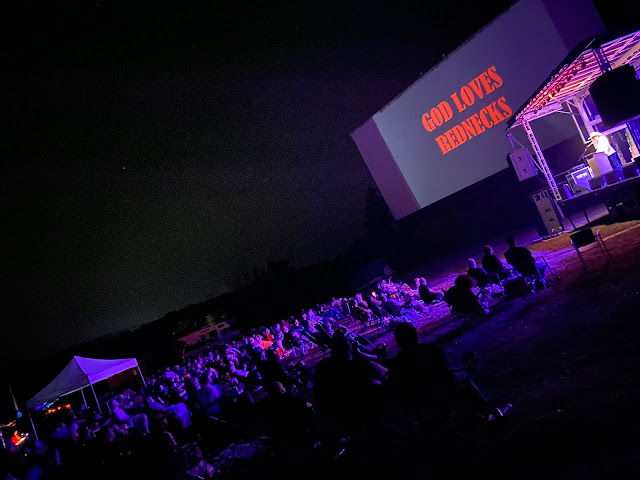 It's not easy to describe this show to someone unless they're already familiar with the work of Mr. Joe Bob Briggs.  Even the man himself has a difficult time explaining it.  However, I'm here to tell you that if you have the opportunity to see How Rednecks Saved Hollywood, do yourself a favor and go to see it.  It is an incredible show!  It's informative, hysterically funny, and I guarantee you'll have a great time!
Tyler put together a list on Letterboxd of movies that Joe Bob discussed in this presentation.  It would take you a heck of a long time to watch all of these, but I'm definitely going to try to see as many of them as I can.  Well, all except for Child Bride.  From what Mr. Briggs said during the show, that one goes in a direction that I want no parts of. 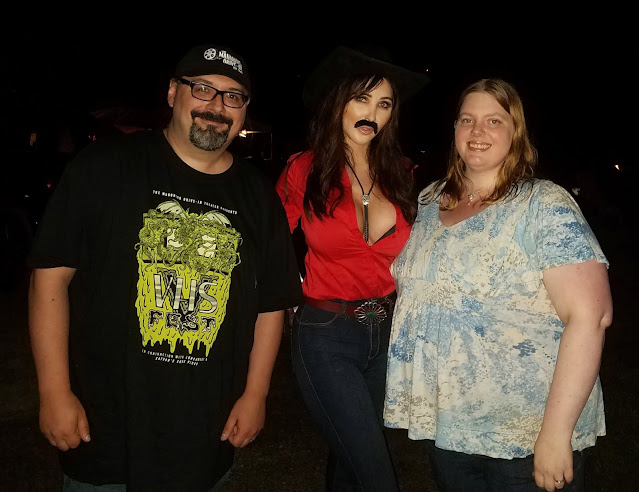 After the presentation, I noticed that Darcy was hanging out talking with some folks by the digital projection booth where she was controlling the presentation on the big screen.  She was wearing a Burt Reynolds / Bandit cosplay, complete with a fuzzy mustache.  I was definitely looking forward to meeting her, but Angie wanted to about ten times more than me, and she had stepped away.  I knew she'd be back soon because our car was right there, but I was worried that Darcy would have been called away before Angie got back, so I kind of sheepishly went up to her and asked if she was busy.  I'm sure I sounded like a great big nerd, but I asked if she could hang out for a minute or two because my wife would be right back and she was dying to meet her.  Sure enough, my wife was back before long and Darcy was absolutely incredible, and every bit as kind in real life as she is on Twitter and in the show. 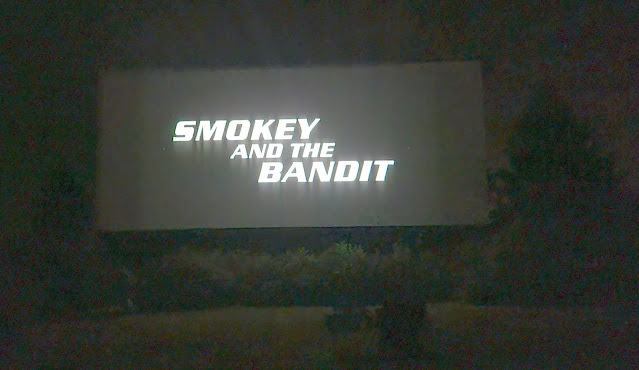 Last, but certainly not least, we all got to enjoy an original 35mm print of Smokey And The Bandit on that beautiful screen.  This is the film that Joe Bob calls his favorite movie of all time.  Having the opportunity to see it under the stars at a drive-in, surrounded by hundreds of other movie lovers with the man himself just a few yards away is an experience that I will treasure for as long as I live. 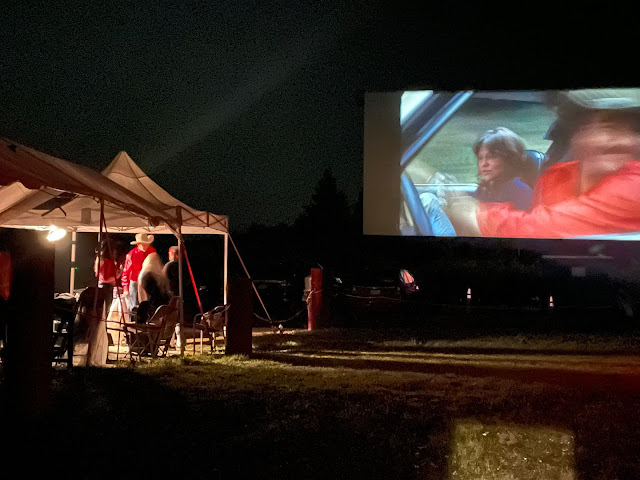 Incidentally, when I say that Joe Bob was just a few yards away throughout the night, I meant that literally.  The Mahoning Drive-in shared this photo on Twitter at 1:56 am  He and Darcy stayed throughout the entire movie, which didn't end until after 2:00 am, to sign autographs, take pictures and meet fans.  I can't think of anyone else who cares this much about their fans. 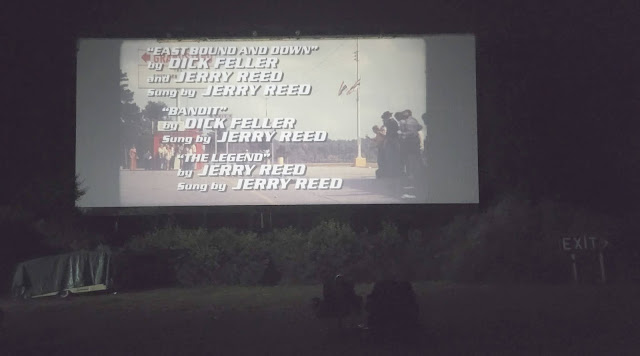 This was one of the most magical, surreal and fun days in my life, and it's only the first day.  I regret to say that I won't be in town tomorrow.  If I had to do it over again, I think I would have sold my Phillies tickets so that we could attend all four nights, but I'll be back at the Mahoning Drive-in for the Jamboree on Saturday and Sunday.