A Horror Christmas In July 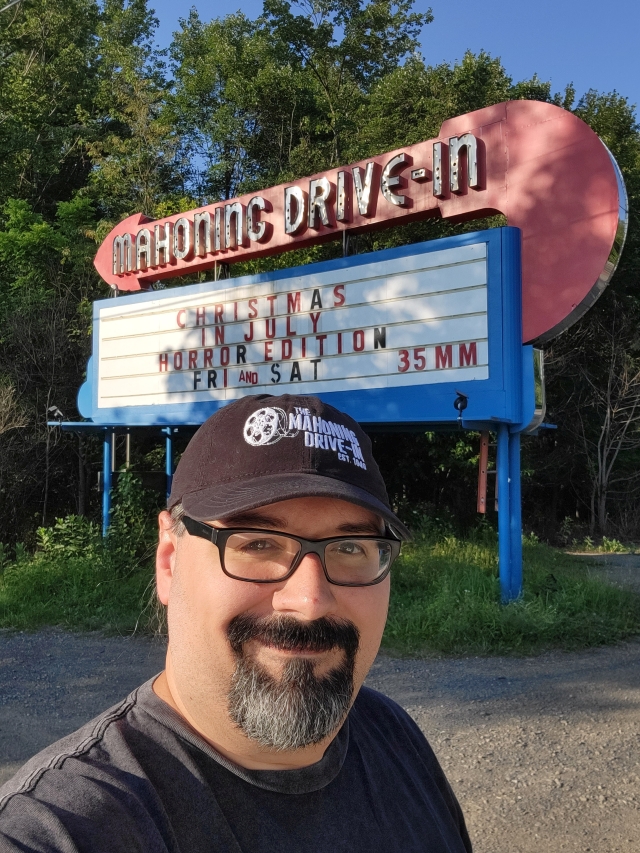 Christmas In July (The Horror Edition)
Mahoning Drive-In - Lehighton, PA
I wouldn't blame any newcomers to this blog if they believed that I was a paid advertiser of the Mahoning Drive-In, but I promise that this is not the case.  The fact that it has become a glorified love letter to the theater throughout this summer is purely a result of my actually falling in love with the place.  The only place in the world that has given me this many wonderful nights and happy memories is the boardwalk at Wildwood in the 80's. 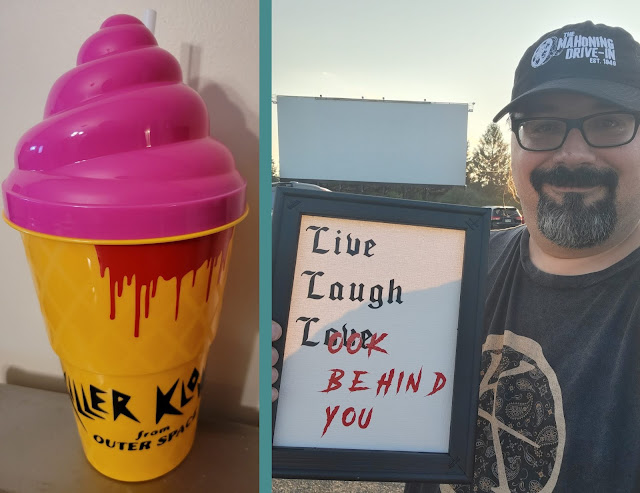 There were a few vendor tables set up near the concession building, including an awesome seller of horror themed bath products, candles and home decor called Ice Cream & Gore.  We brought home an awesome Killer Klowns From Outer Space ice cream cup.  They were selling one that light up, but I opted for the no-light version because this isn't going to be a display piece. I fully intend to make this my drive-in cup.  It holds 49 oz and it fits in the cup holder in my camping.  It's perfect!  We also got this sign which will be hanging up in our kitchen very soon. 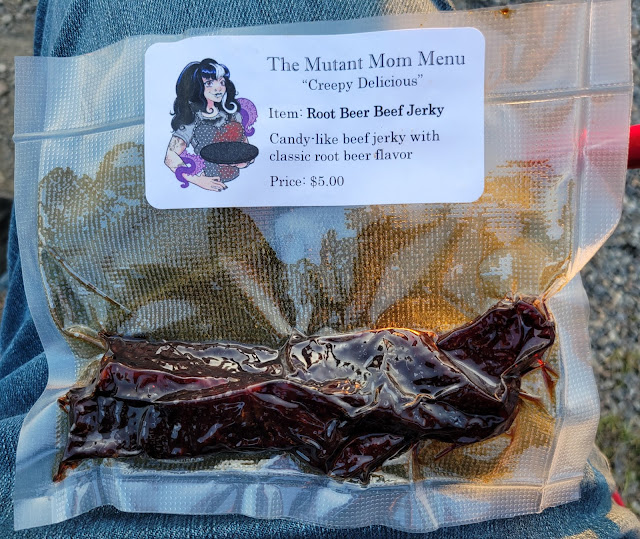 The vehicle that pulled up next to us in the lot was The Mutant Mom Menu family.  They had an awesome snack bar set up at the Jamboree last weekend that was an attraction in and of itself.  It was themed as a cannibal delicatessen, and they were selling all kinds of goodies, including seasoning blends, meatballs and beef jerky.  I didn't take many pictures of it because they incorporated their children in the act, and I try to avoid taking pictures of kids that I don't know.  It's a crazy world, and I don't ever want to make anyone feel uncomfortable.  Anyway, we talked with them throughout the night and they're very cool and incredibly talented and creative folks.  They shared some of their root beer beef jerky with us.  I never would have thought to combine these flavors, but it was delicious! 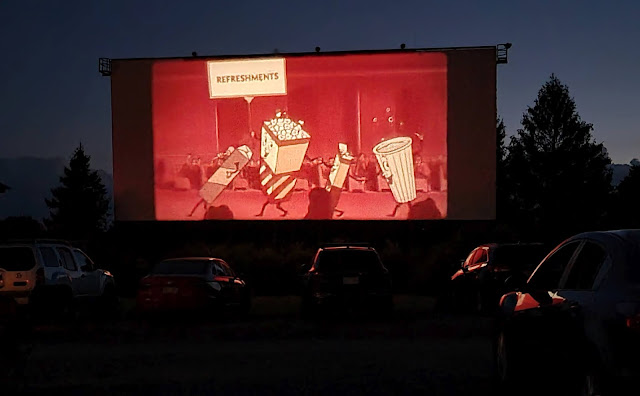 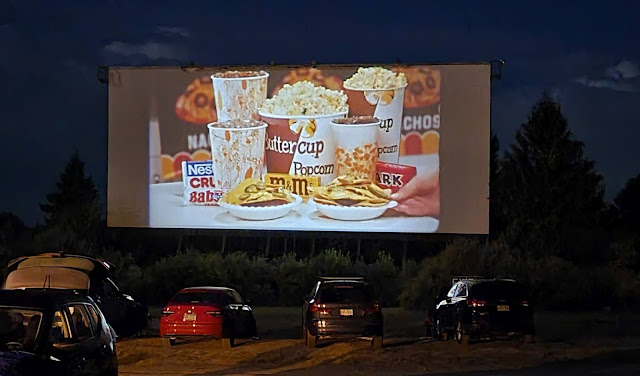 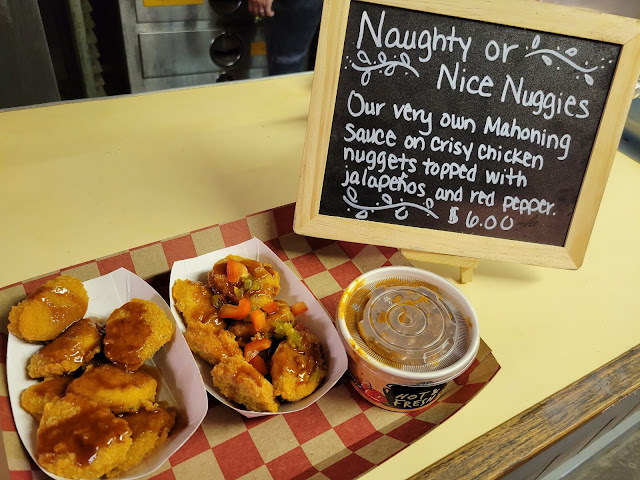 The special themed meal of the day at the concession stand was Naughty Or Nice Nuggies, which were very tasty.  They had a little kick, but they weren't nearly as spicy as the VHS Zest Nuggets from VHS Fest.  That's not necessarily a bad thing.  I love spicy foods, but my stomach isn't the cast iron Sarlacc Pit that it used to be. 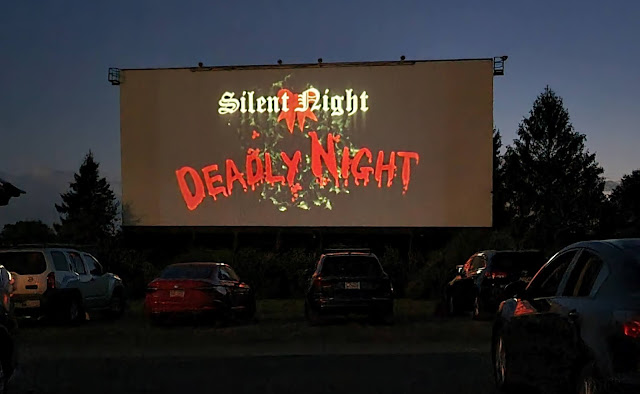 The first half of tonight's double feature was the 1984 slasher classic; Silent Night, Deadly Night.  When I was a kid, I would hover around the horror section at Blockbuster Video and stare at the VHS box for this movie, hoping that this would be the day that my grandfather would let me rent a Rated R movie.  It was one of the first movies I rented when I was old enough to go to the video store by myself, and I absolutely loved it!  Now, at 41 years old, I got to see an original 35mm print of it at the drive in.
If you want to know why I praise this place so much, consider this:  When the movie got to the part where the police are out hunting for Billy Chapman after he had just killed a bunch of folks while dressed as Santa, the production manager at the Mahoning wandered the lot in a full Santa costume while carrying an axe.  This wasn't a toy axe, by the way.  It was a god damned axe!  He snuck up on cars and folks who were sitting out in lawn chairs to scare the hell out of them and take pictures with them.  There was also a woman cosplaying Linnea Quigley after she was impaled by deer antlers.  Seriously, name one other place in the world whose team does this many awesome and unexpected things to make a visit even more fun and memorable. 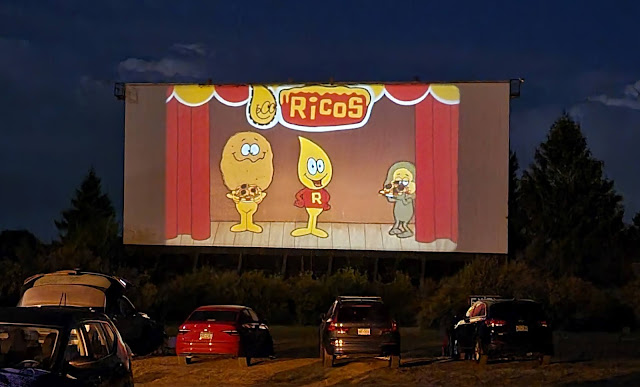 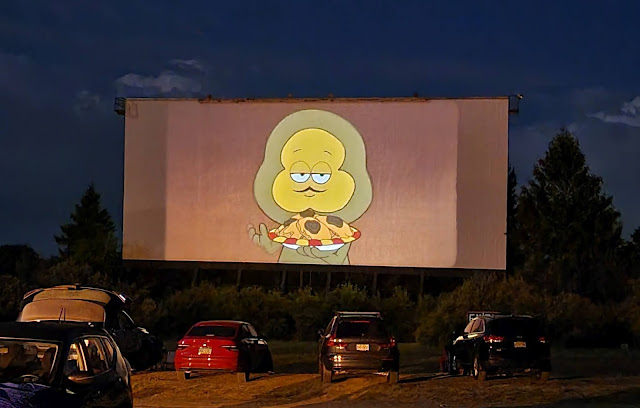 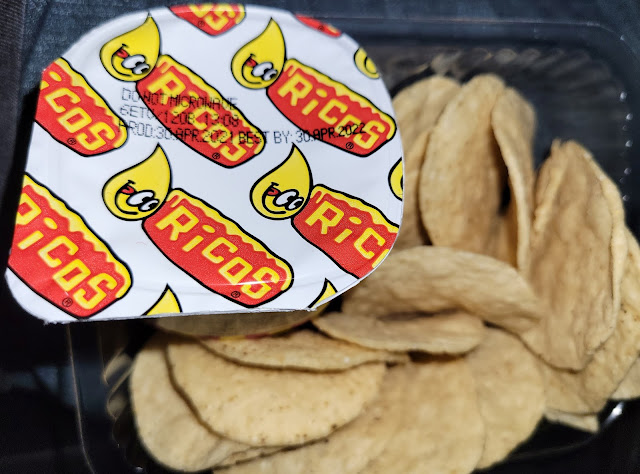 It got a little chilly when the sun went down, so it was a perfect night to pick up some chips and hot nacho cheese during intermission.  Since I started coming to the Mahoning, I have fallen head over heels in love with Rico and Pepe.  This is going to end up being my first cosplay at the drive-in if I ever get the motivation to put it together. 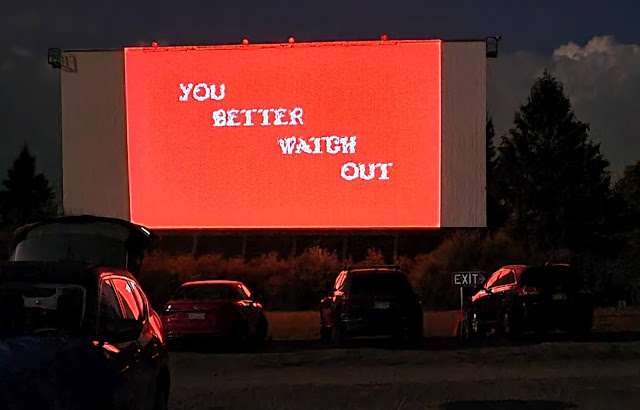 The second movie of the night was Christmas Evil.  It's a 1980 holiday slasher that was originally released under the title You Better Watch Out, and it stars Brandon Maggart, who is the father of singer Fiona Apple.  It's a good movie, but the beginning of it does drag on for a bit, so you have to be patient for the first 30 minutes to fully appreciate it.  Unfortunately, the owner of the only known 35mm print of this film had hurt his shoulder and wasn't able to ship it to the Mahoning in time for the show, so this was a digital screening.  Seriously, I have the utmost respect for Virgil and the team, not only for their efforts to screen the original 35mm prints of films, but for having a backup plan and for being forthcoming with the audience when things like this happen.

Horror Christmas In July will continue on Saturday with Silent Night Deadly Night: Part 2 and Black Christmas, but we won't be in attendance for that one.  As awesome as that double feature sounds, tomorrow is our 10th wedding anniversary, so we will be in Lancaster to see a musical production of Beauty And The Beast.  It's good to fill your weekend with a night of axe murders and a musical love story.  It brings balance to The Force.