The Night Of The Living Hogenstein 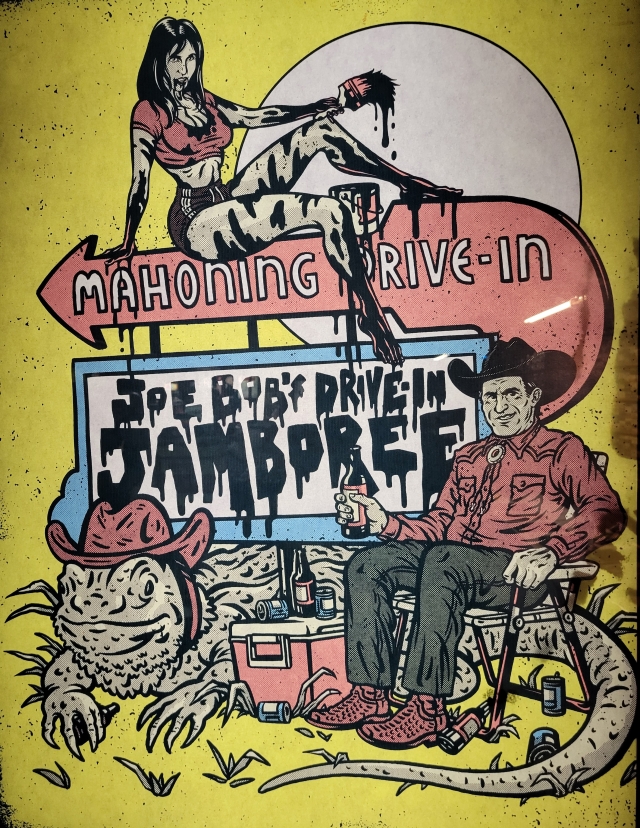 Joe Bob's Drive-In Jamboree
Sunday, July 18th, 2021
Mahoning Drive In - Tamaqua, PA
This has been one of the most fun and incredible events that I have ever had the privilege of being a part of.  I can't begin to express how thankful I am that this happened and that it was so close to my home.  Unfortunately, all good things must come to an end.  Here are some memories of the last day of the first annual Joe Bob's Drive-In Jamboree. 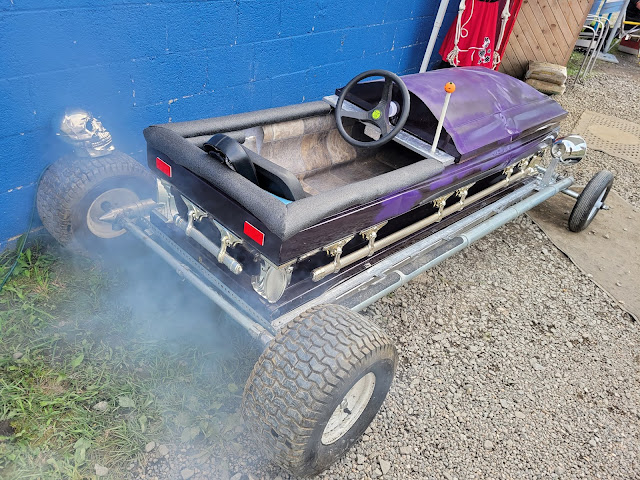 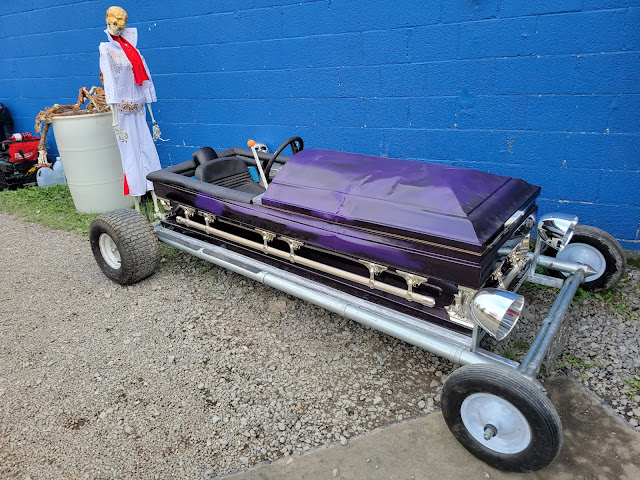 This groovy coffin car was made by Jonathan Miksch and The Haunted Forestry Service.  It was set up outside of the concession building with lights and smoke and was a big hit. 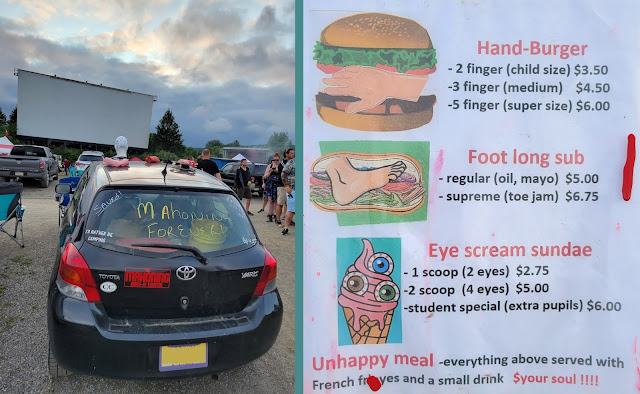 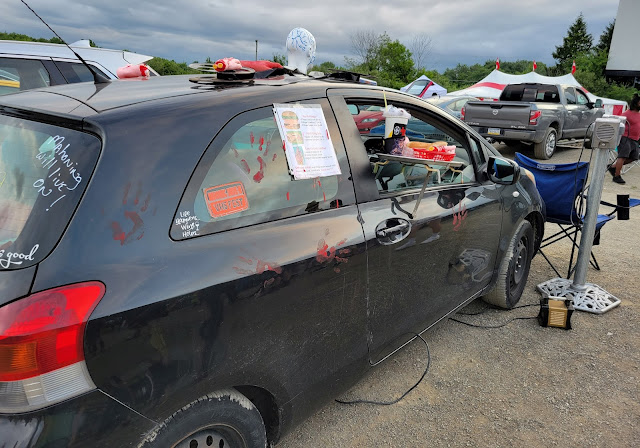 There were quite a few horror-themed vehicles on the lot, but one of my favorites was this one which was parked near the concession stand.  My old Nestle brain kicked in when I saw the Eye Scream Sundae on the menu.  That would probably sell if they did it right - a vanilla or chocolate base with mini chocolate eyeballs as the inclusion and a cherry or strawberry syrup as the variegate.  Sign me up! 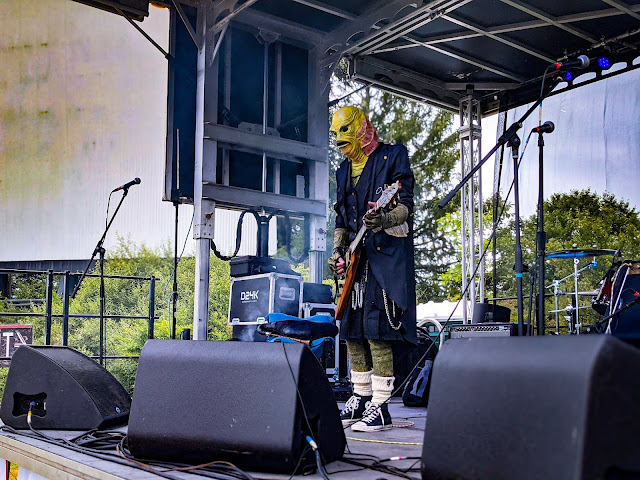 Jow shared this photo of The Kilted Creature, who was the first of the musical performances of the day.  This is a dude who plays guitar and bagpipes while dressed as the punk rock incarnation of The Creature From The Black Lagoon.  Unfortunately, I missed his set, and I'm pretty bummed out about it because I was looking forward to seeing him and I heard he was incredible.  The highlight was when he played Purple Rain on the bagpipes which was shared on Twitter by T. Denton. 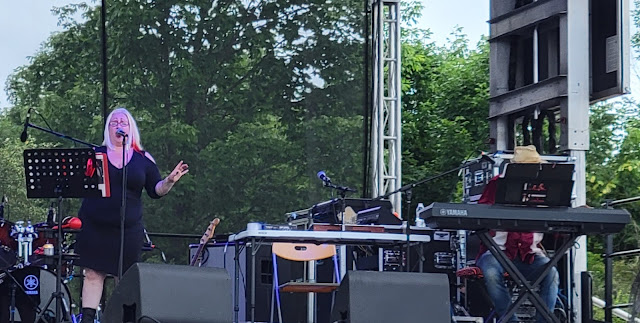 The first group I was able to see was a Philadelphia-based duo called A Piano and a Cocktail Murderess, which is comprised of Liz Zimmerman on vocals and Matthew Stevenson on keyboard.  They were damn good!  I'm not sure if the absinthe parlor in Jim Thorpe is still open, but they had a vibe that would fit right in there.  The highlight of their set for me was an excellent cover of Satan Gave Me A Taco - a Beck tune that definitely belongs in the playlist of any Mutant gathering. 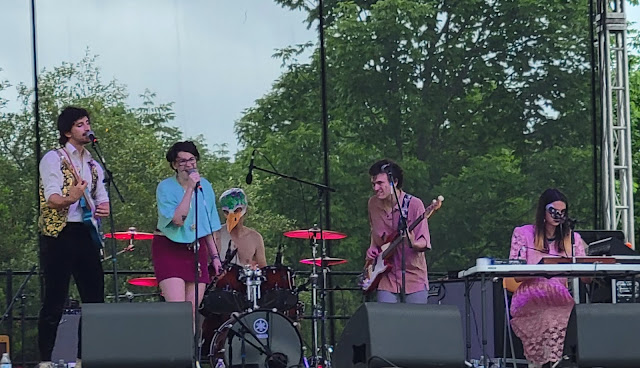 The next band that took the stage was called Ghoul Friends.  This wasn't my cup of tea, but having said all that, keep in mind that I'm a dude in my early 40's whose musical taste skews to the thirty year period of 1965 to 1995.  They had a few spoken word in between their songs where the lead singer talked about the band's appreciation of squares (the geometric shape - not square people) which reminded me a bit of the story elements of The Man Who Stepped Into Yesterday by Phish.

Timmy's Creep Show was the next band.  I'm not sure if it's Creep Show or Creepshow (I've seen it written both ways) but they were one of my favorite groups that performed this weekend.  I especially enjoyed their spot-on cover of Love Buzz.  The lead singer was wearing the tiger shirt that Nicholas Cage wore in Mandy, and the cosplay progressed to the bathroom scene when he performed the second half of his set with a blood stained face in his tighty whities. 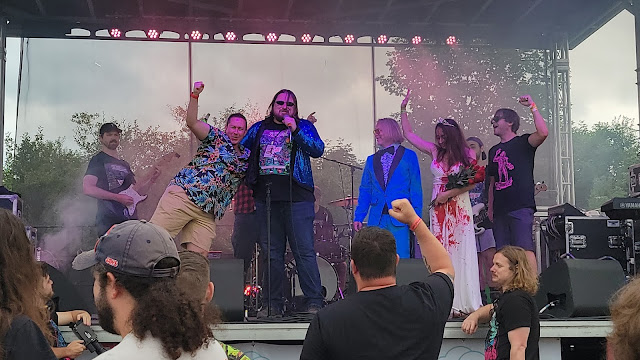 There was an impromptu encore performance by John Brennan & The Bigfeet.  They did a set on Saturday night, but they wanted to tape some footage, so we got to hear The Drive-In Oath, Tearing The Heart Out Of Saturday Night, and an awesome cover of the second half of Metallica's One.  John invited folks up on stage with the band.  That's Gerald in the Aloha shirt standing next to him. 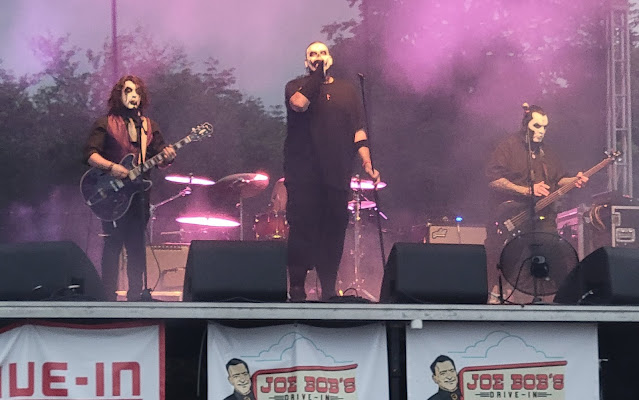 The last band that performed was Lords Of October, and they weren't at all what I was expecting.  I'm going to go ahead and blame Psychopathic Records for this, but I've been conditioned to expect horrorcore when I see musicians in black clothes and white facepaint.  No disrespect intended to ICP and Twiztid, but I was pleasantly surprised to find that these guys have a very different sound.  They're a damn good hard rock band.  The website describes their music as "a mix between The Misfits, Anthrax and Goblin" and that's fair, but truth be told, I think they have a sound that's pretty unique and awesome in and of itself.
The paper that had the setlist blew away during the show, so they either had a good memory or they winged it for the rest of the set.  I'm not familiar with their own material, but they did rock covers of the Monster Mash and the theme song from Scooby Doo which were awesome.  I'm going to spend some time digging through their Spotify this week. 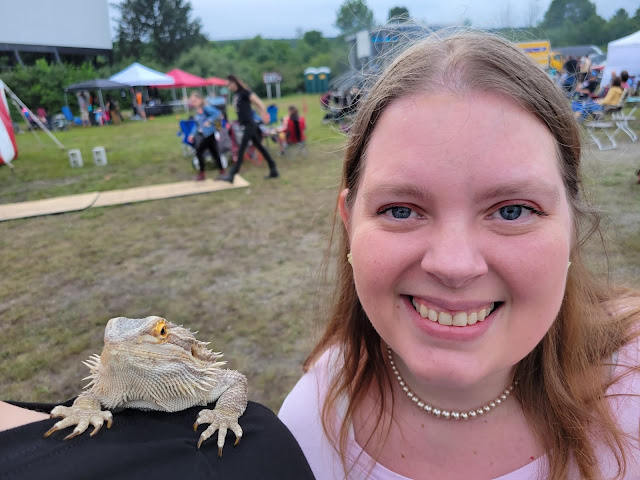 Before the movies began, Angie wanted to get a selfie with Ernie the Bearded Dragon who appears in every episode of The Last Drive-In.  He belongs to the show's producer, Austin Jennings, and was riding around on his shoulder throughout the Jamboree. 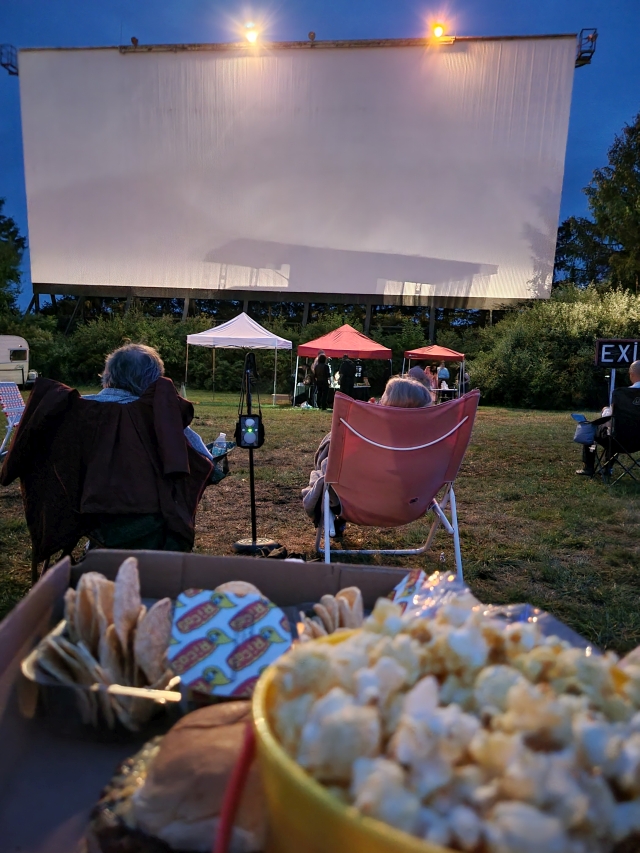 When the sun starts to set, it's time to hit up the concession stand for a bucket of popcorn and some Rico's Nachos (sí).  They were sold out of the Jamboree Burger, but the regular cheeseburgers are pretty darn tasty too.  Then, all that's left to do is get settled in to a good spot and enjoy the show! 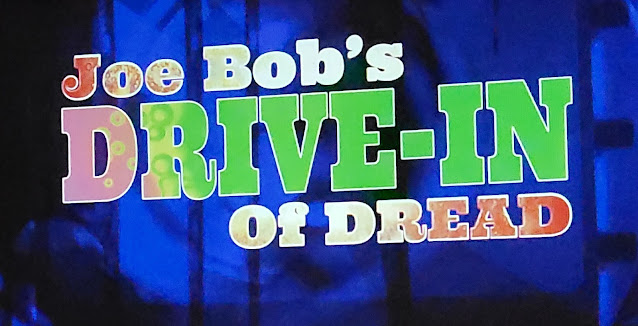 The highlight of the night was Joe Bob's Drive-In Of Dread, which is one of the most unique and fun concepts that I have ever seen.  It was a Joe Bob hosted movie event with two classic horror films, similar to Monstervision on TNT and The Last Drive-In on Shudder.  However, the segments were filmed in the projection booth at the Mahoning, and they had an ongoing story in which mutant redneck zombies had taken over the drive-in and were terrorizing the audience who were outside watching the movie.
While this was happening on the screen, mutant redneck zombies were roaming the property, sneaking up behind folks who were watching the movie from their camping chairs on the lawn, and invading the vehicles of the fans who were watching from their cars.
To fully appreciate this, keep in mind two important things: it was pitch black outside, with the only light coming from the screen and the occasional radio or cell phone on the lot, and the costumes and makeup of the mutant redneck zombies was outstanding.  This wasn't just a couple of people in Spirit Store costumes saying boo; this was a combination of costumes, masks, makeup and props that must have taken a hell of a lot of time and love to put together.  Also, the people who were playing the mutant redneck zombies were committed to their role.  One dude took off running after people at top speed, like something out of 28 Days Later.  Another one was literally crawling on the ground and would lay flat behind your chair before bursting up to scare the hell out of you.  The main zombie was called Hogenstein, who was a ridiculously large dude in a costume that served as a throwback to Hogzilla.  It was incredible! 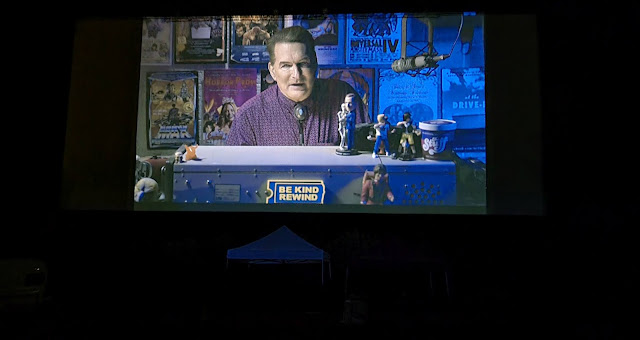 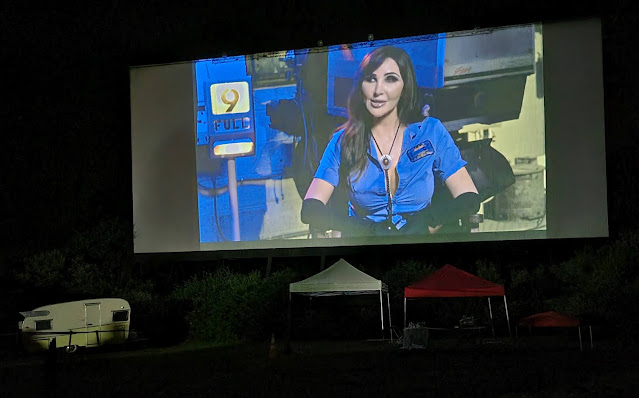 The story that played out during Joe Bob and Darcy's segments that took place throughout the two movies was awesome!  Joe Bob was doing what he does - talking about the movie that we're watching, share facts and stories, and going on the occasional rant that goes way off topic.  Meanwhile, Darcy was trying to get him to recognize that there was a zombie attack on the lot.  Naturally, Joe Bob no-sold this for as long as he could, downplaying the fact that there was anything out of the ordinary going on. 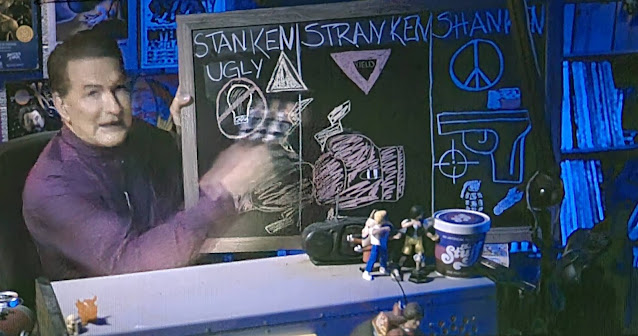 Eventually, Joe Bob began to take the threat seriously, and he attempted to educate the audience on the creatures who were waging war with is and with each other.  They fall into one of three groups: the Stankens, the Strankens and the Shankens, with one massive mutant that everyone was afraid of: Hogenstein. 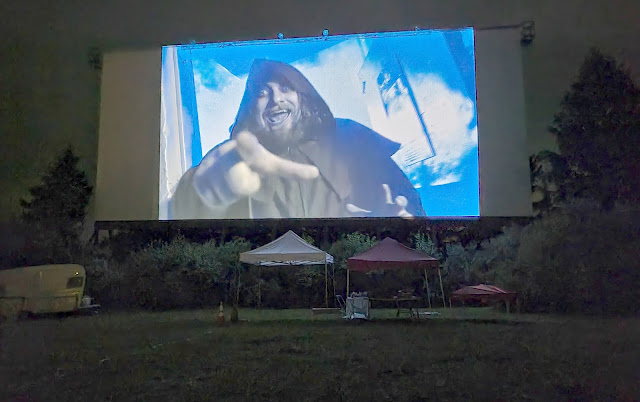 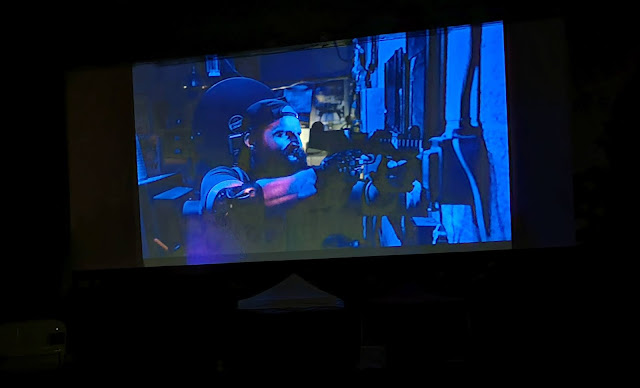 John Brennan played the Lon Chaney role throughout the night.  He appeared as a variety of characters, including The Hooded Harbinger Of Doom and a gun toting member of the Shankens. 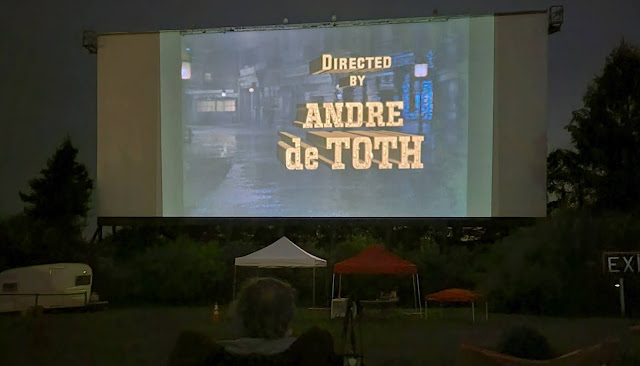 The first movie of Joe Bob's Drive-In Of Dread was the original 1953 classic House Of Wax, starring the great Vincent Price.  It's an incredible horror classic that was made that much better with the random screams from other folks in the audience as they were scared by the mutant zombie rednecks who were roaming the lot.  There was a group sitting behind me on my left hand side that they kept going back to scare.  They were great screamers! 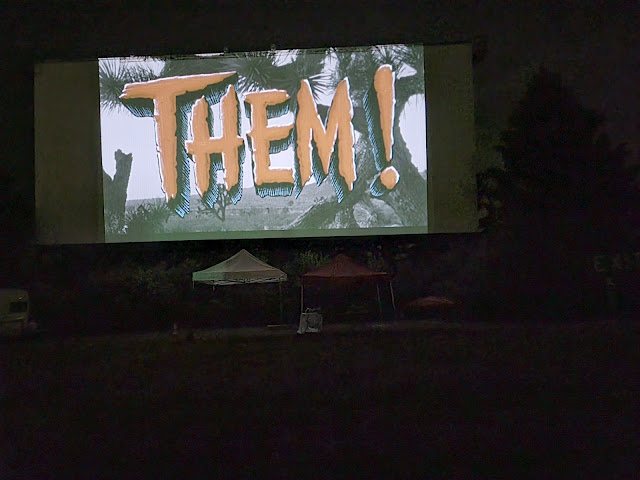 The second feature was the 1954 creature feature - Them! - in which giant nuclear ants pose a threat to the future of humanity.  This is one of my wife's favorite movies because she watched it with her grandmother when she was a little girl.
This is the last few seconds of Joe Bob's Drive-In Of Dread.  I didn't really capture any video recordings of the event except for some of the performances on the music stage, but I wanted to preserve the end of the Jamboree.  What I didn't expect is that after Joe Bob and Darcy said good night to the crowd and the screen went dark, there was one more awesome moment to come.  One of the mutant zombie rednecks who had been scaring the group sitting behind us throughout the night was hiding and waiting for the perfect moment to scare them one last time when they least expected it.  What a perfect end to an incredible event!
I can't begin to express how great this whole experience was.  I'm an awkward dude, and I have a difficult time making friends with people sometimes.  When I'm in big crowds or with people that I just met, I tend to second guess the things I say and assume that I don't belong and that people would rather not have me around.  It's something I've dealt with for many years, and I recognize that most of it is in my head.  I'm not gonna lie - those feelings popped up in my head during the Jamboree too, but it was such an overwhelmingly fun and supportive environment that I was able to quickly overcome them and have a great time.  I can't wait for the Jamboree next year!