We're Tearing The Heart Out Of Saturday Night 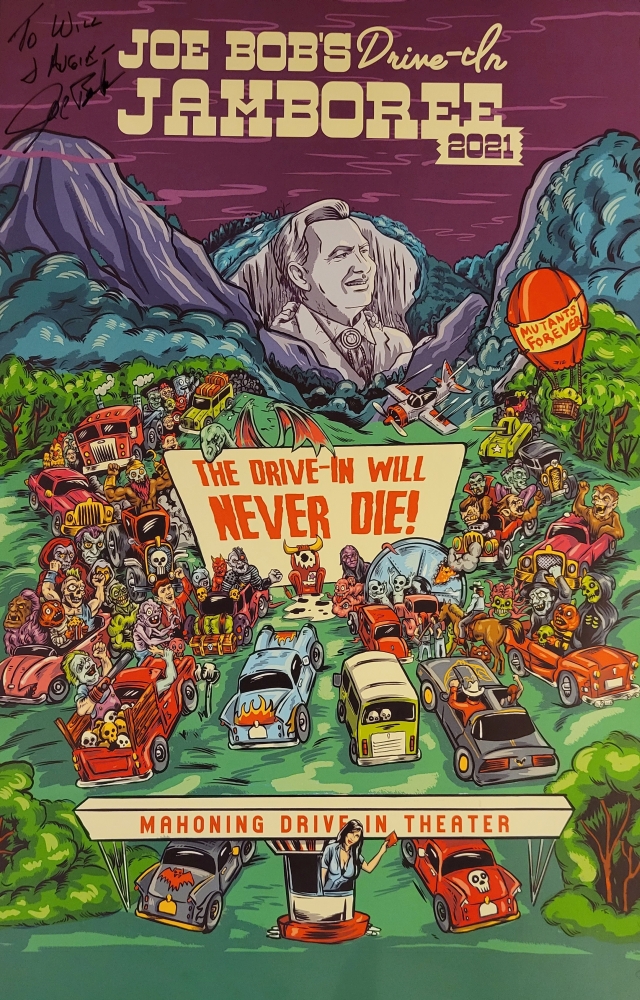 Joe Bob's Drive-In Jamboree
Saturday, July 17th, 2021
Mahoning Drive In - Tamaqua, PA
This incredible poster for what we hope will be the first annual Joe Bob Drive-In Jamboree was illustrated by Travis Knight and it perfectly captures the spirit of this event.  Mr. Briggs autographed the poster for us when we were here on Thursday.  Unfortunately, we missed out on the film festival that was held at the Jamboree yesterday because of the ballgame.  I wish I would have been able to be there, but from what the folks on the lot were saying, the weather was pretty rough.  One person who was also at VHS Fest the week before told me that the rain wasn't quite as bad as that monsoon we had the week before, but it was close. 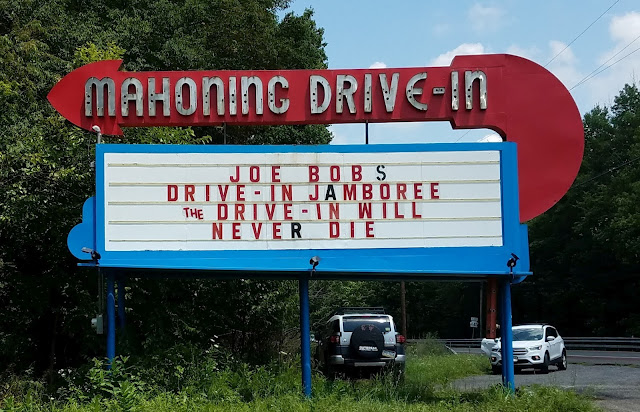 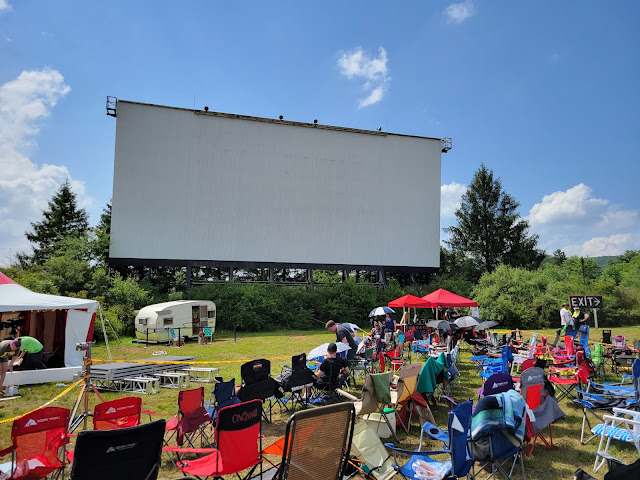 We had clear skies for the start of Saturday.  It wouldn't last, but it was a heck of a lot better weather than they had yesterday.  We set up our camping chairs on the lawn in a good spot to see the concert stage and the screen.  There was a section roped off for folks to sit next to the staging tent where Joe Bob and Darcy would be filming The Last Drive-In, but that was for the people who bought the highest tier tickets that allowed for camping overnight.  Our tickets were the next highest tier, but it was no problem at all.  There really is no bad spot at the Mahoning. 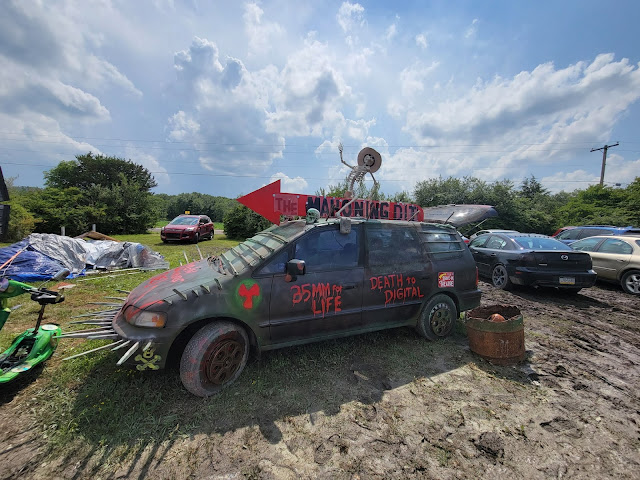 There were a few mutant-mobiles set up on the right near the entrance after you pulled into the Mahoning Drive-In.  I don't usually like the photos that I take, but I really love how this one came out.  The pattern of the clouds fanning out with the shadow of the spikes on the bottom left corner make the SUV really pop. 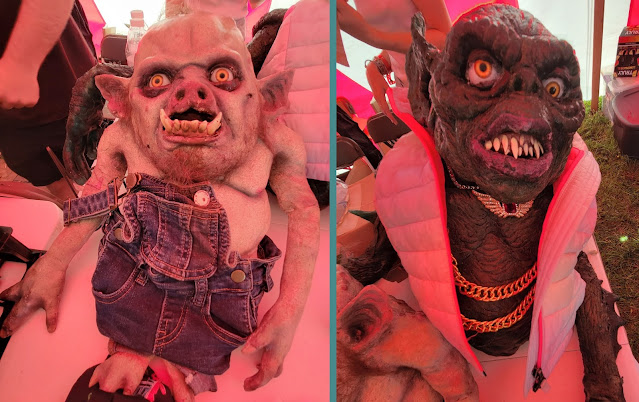 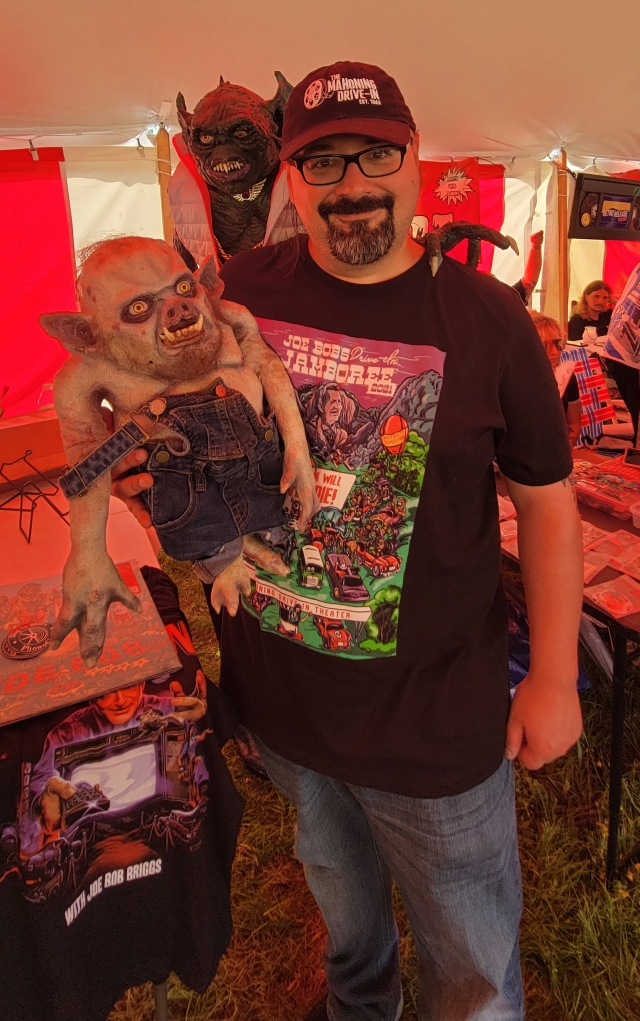 Many of the vendor tents were wiped out from the rain, but Darcy came to the rescue by donating her tent that was meant to be used for Saturday morning cartoons as a place where the vendors could set up so they didn't miss out on the weekend.  It's a bummer to miss out on the cartoons, but the greater good was served here.  I know that people's livelihoods depend on being able to sell their merchandise at events like this, and we all wanted to bring home some goodies from the Jamboree.
The tent was at the opposite corner of the lot from the exit.  Basically, if you kept going straight when you entered the lot, you'd see it on the far right hand side where the property bordered the tree line that surrounds the drive-in.  One of the vendors that I was very happy to find here was the Ship To Shore PhonoCo.  They're a record label that releases high quality vinyl pressings of the soundtracks for movies (both new and classic), video games and albums from independent artists.  I was just hoping to pick up a few records (which I will write about another time), but I got an unexpected surprise when I found Spookie and The Chili Bandit from The Last Drive-In hanging out on their table.  The dude at the booth saw that I was taking pictures and asked if I wanted to take one with them.  Hell yeah, I do! 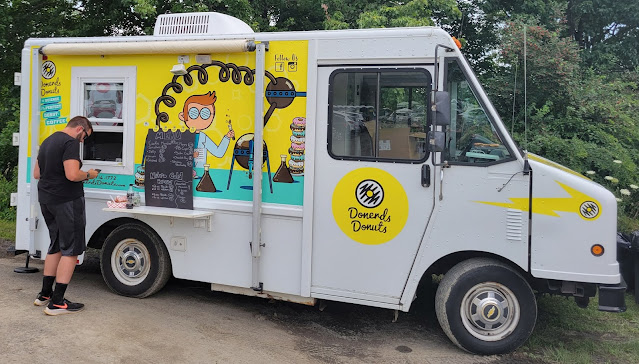 One of the food trucks that we stopped at was for Donerd's Donuts.  They have a shop not far from the Opera House in Jim Thorpe.  We got a Cookie Monster and Unicorn donut.  They looked pretty, but they're way too sweet for my tastes.  Thankfully, they also sold nitro cold brew coffee, which was delicious and helped cut down the sugar from the donut a bit. 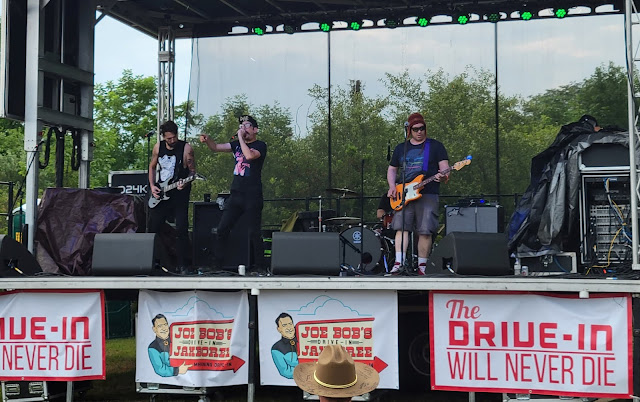 The Shelf Life String Band was on stage when we arrived, but we were over at the merch tent and by the food trucks, so I didn't get to see them.  By the time we settled in to our seats on the lawn near the stage, Pissed had taken the stage.  They're a punk rock band out of Trenton.  Their lead singer has a raw Zack de la Rocha quality, both in message and its delivery.  Definitely good stuff.  Just as Joe Bob promised, they performed Shitter's Full, which is the band's ode to birth control and overpopulation. 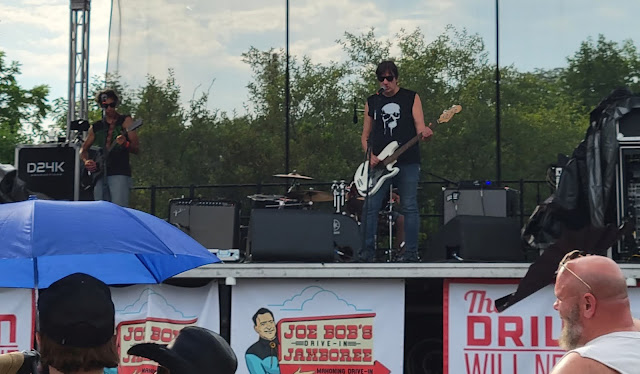 Next up was The Accelerators, a power pop/punk band from New Jersey.  Their sound is inspired by The Ramones and The Smithereens, and they've released over 30 albums since they got their start in the early 80's.  They're definitely a more mellow kind of punk than Pissed, but a damn good band. 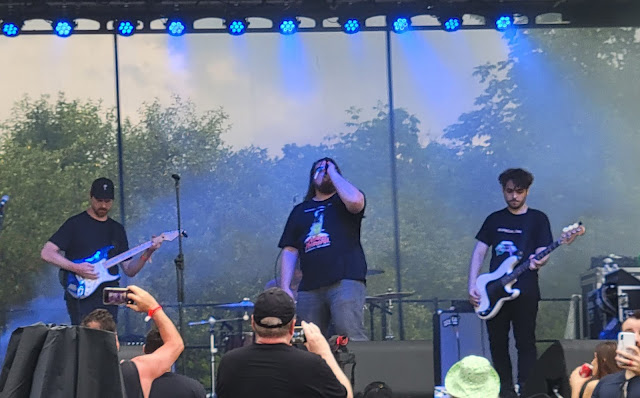 The main event of the music stage was John Brennan & The Bigfeet.  Mr. Brennan is the musical director and performer on The Last Drive-In.  Their setlist included The Drive-In Oath from the end credits of the show, and a few songs off of their album, including an ode to cheeseburgers that was stuck in my head for the rest of the night.  I had the opportunity to talk with Mr. Brennan later in the day, and he's a hell of a nice dude. 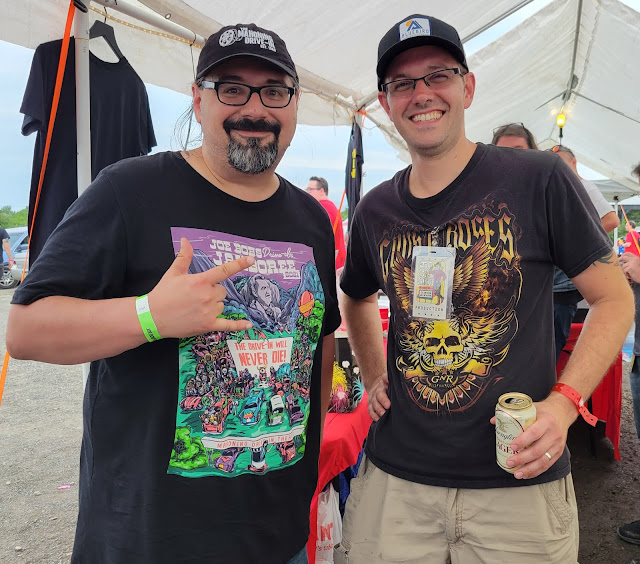 Another awesome person that I'm very happy to have had the chance to meet is James Rolfe.  I've been a huge fan of his work for at least 15 years - particularly the Angry Video Game Nerd and the Monster Madness series that he does for his channel, Cinemassacre. 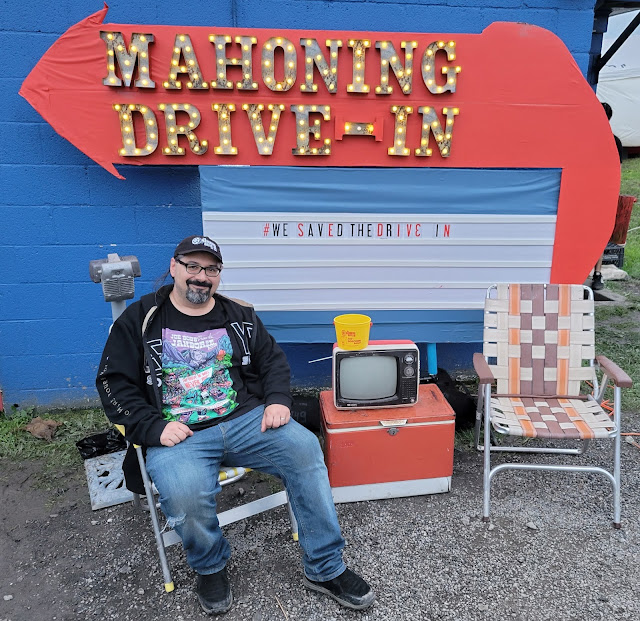 They had this cool little photo staging area set up by the concession building, so I stopped to take a picture on the way to fill up my little yellow popcorn bucket before the movies started. 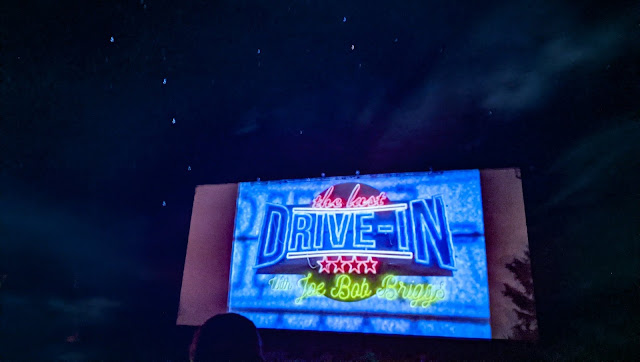 Jow shared this incredible photo of the Mahoning screen under the stars with The Last Drive-In title card.  I can't begin to explain how happy I am that this drive-in has been saved.  I've only been coming here for a few months and I can't imagine the area without it.  The opportunity to see the great Joe Bob Briggs host movies here with folks from all over the country is a privilege that I don't at all take for granted.  This experience was amazing, and I am truly thankful to be here.
Before the movies began, Mr. Briggs led the audience in taking The Drive-In Oath.  Jolene Marie, the costume designer for The Last Drive-In (and the woman who makes Darcy's incredible cosplays during the season) captured the moment on video.  I can't begin to express how thankful I am that she did.  I've been watching Joe Bob since I was a middle school kid in the 90's and to be able to take the Oath with him here at the Mahoning is an experience that I treasure and will never forget. 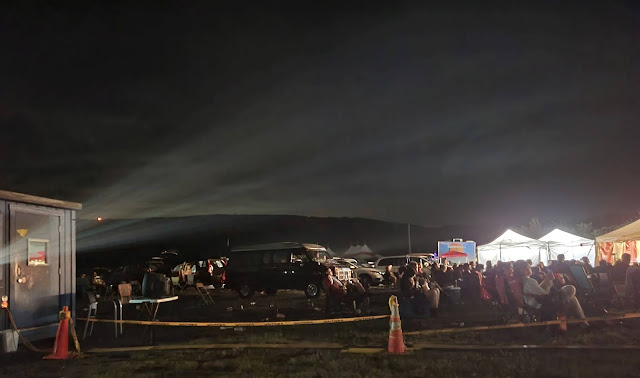 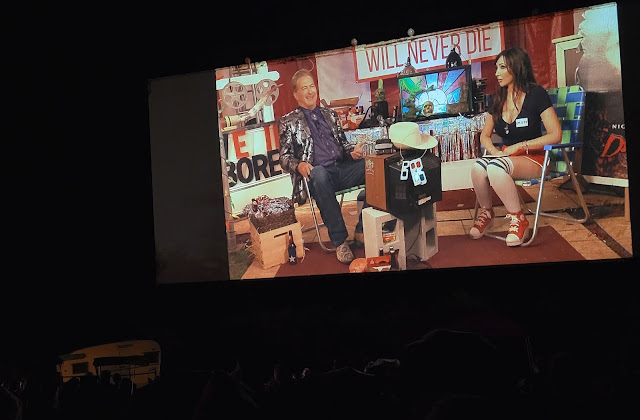 The left hand corner of the front of the lot had a massive tent where The Last Drive-In was being taped and broadcast from.  The right hand corner near the exit had the concert stage.  They flanked the big, beautiful CinemaScope screen at the Mahoning.  The blue digital projection booth in the center was used to project both the movies and the segments of The Last Drive-In live as they were happening in the tent. 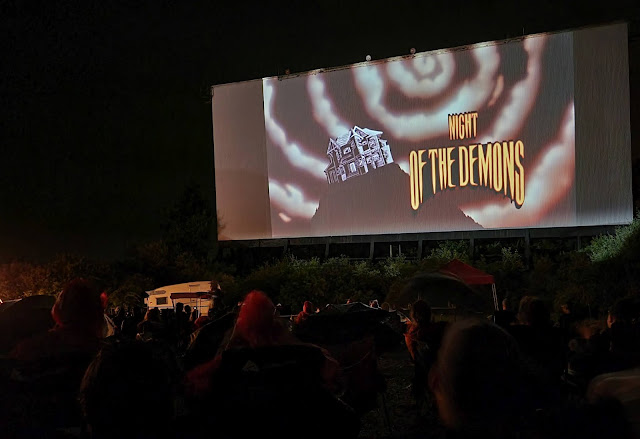 The first movie of the night was the 1988 horror classic Night Of The Demons.  They don't get much cheesier than this, but I mean that as a compliment.  In fact, this movie is a good way to gauge compatibility.  If you have a good time watching Night Of The Demons, there's a pretty good chance that we would get along and become fast friends. 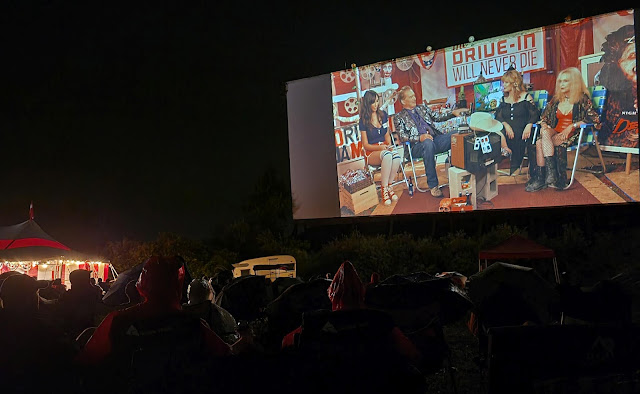 Amelia Kinkade and Linnea Quigley joined Joe Bob and Darcy on the set during the movie.  Both ladies star in Night Of The Demons, and both were at the drive-in all day to take pictures, sign autographs and meet the fans.  I don't want to spoil the details of the show because I'm pretty sure it's going to eventually air on Shudder.  I will say that it's an episode that you're not going to want to miss!
It was lightly drizzling off and on throughout the day, but it really started to pick up when the sun went down.  The rain fell pretty steadily for most of the first movie.  I wouldn't say that it was a downpour, but it definitely wasn't a sprinkle either.  I sat on the lawn in my chair with my hoodie pulled up and a pretty heavy grey blanket over my head.  That kept me reasonably dry until the rain settled down.  It eventually stopped during Intermission, and I was able to make it back to the car to change into dry clothes. 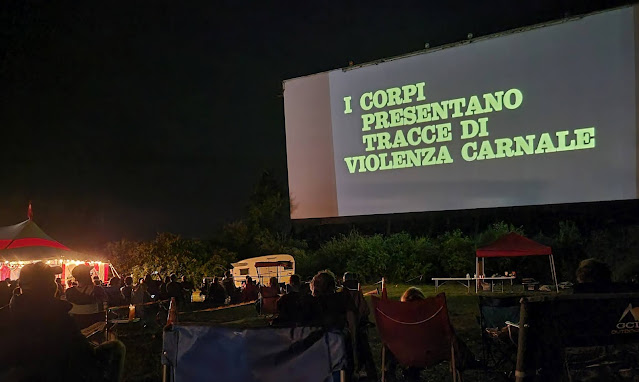 The second movie of the night was a Giallo film directed by Sergio Martino.  The Italian title is I Corpi Presentano Tracce Di Violenza Carnale, which translates into English as "The Bodies Bear Traces of Carnal Violence".  However, the American title of the movie is much easier to remember - Torso.  I've never heard of it before today, but it's a pretty excellent murder mystery film.  During one of his segments, Joe Bob mentioned that no one in the production of the film was given the final pages of the script, so no one knew who the killer was until the final days of filming. 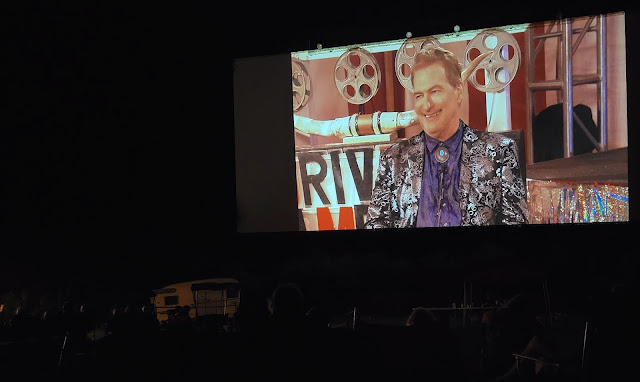 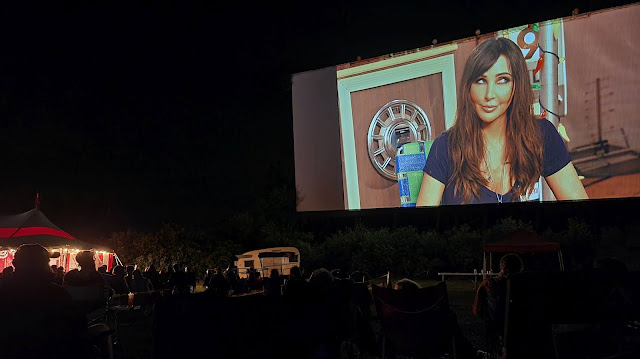 After the movies were over, Joe Bob and Darcy took a moment to present the 2021 Drive-in Lifetime Achievement Award to the Mahoning Drive-In owner and chief projectionist, Jeff Mattox.  He wasn't able to be there to accept it, so his team, Virgil, Mark and JT, accepted it on his behalf.  It's an award that has previously been accepted by Stephen King, Roger Corman and Arnold Schwarzenegger, and now another movie icon can be added to that list. 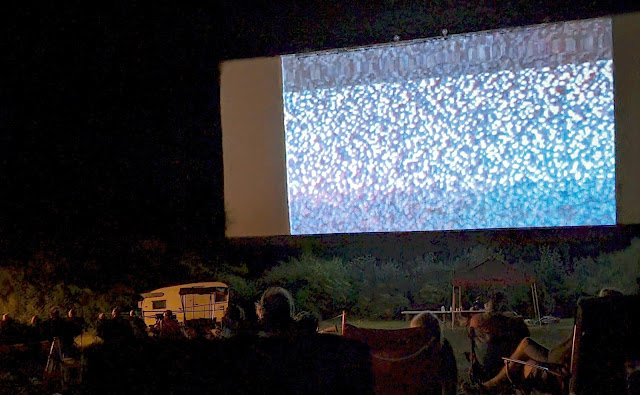 And that was the end of our Saturday at Joe Bob's Jamboree.  We've got one more day to go, and I plan to enjoy every minute of it that I can.