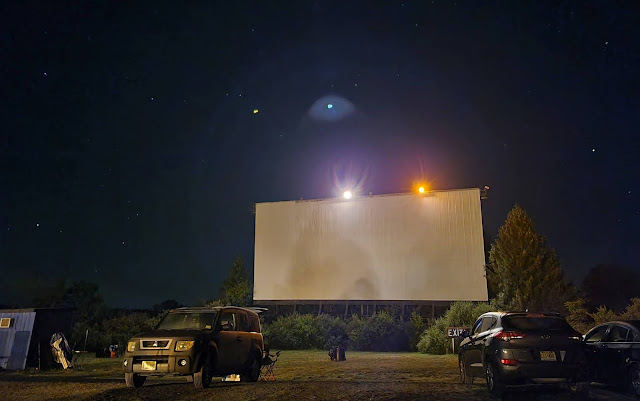 Intermission Reel
Mahoning Drive-In - Lehighton, PA
They almost always show vintage trailers before movies and during intermission at the Mahoning Drive-In.  I usually snap a picture of the title screen for things that look interesting so that I can look them up when we get home.
The intermission reel that played after UHF at the We Saved The Mahoning event on Monday had dozens of movies and ads for businesses in Pennsylvania.  There was even an ad for a heater that was hooked up to the drive-in speaker back in the day that kept people warn in their cars.
From the years that the movies are from, and from the slides that include a date and a day of the week, I believe these originally were shown in Spring 1963.  These gifs have fewer than half of the screens that were shown in this intermission reel, but it'll give you a good idea of some of the awesome ways that the Mahoning makes things special for the folks who come to see a movie here.  Maybe it'll even give you some streaming ideas for the next time you're in the mood to watch an old movie.