One Legend's Tribute To Another 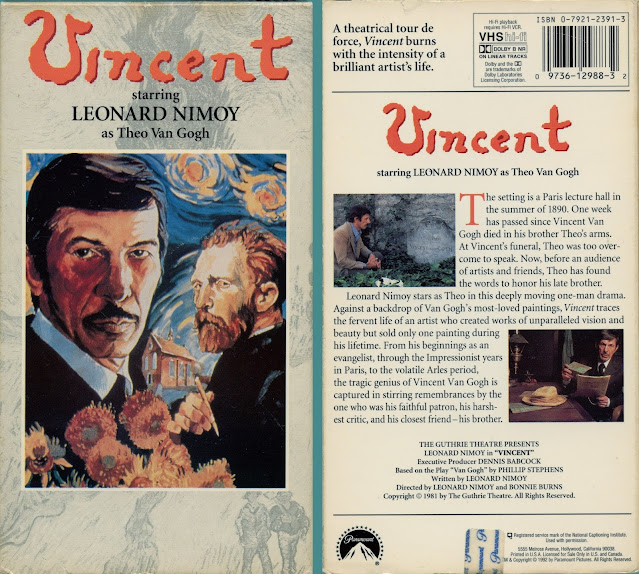 Vincent
Leonard Nimoy (1981)
On the drive to Philadelphia with my dad earlier this month, I mentioned to him that I had tickets to see Van Gogh: The Immersive Experience.  This got us talking about Vincent van Gogh, and he told me about a play that he had once seen.  It's a one-man show written and performed by Leonard Nimoy in which he plays Theo van Gogh eulogizing the death of his brother, Vincent.  Dad had a copy of it on VHS that he let me borrow.
The show took place at the Guthrie Theater in Minneapolis on August 2nd and 3rd, 1981.  From these newspaper clippings, it seems that the VHS was made up of footage from both performances.  It's an incredible show, and nothing I'm going to say here is going to do it justice.  It's a very emotional experience, and one that taught me far more about the life and works of Vincent van Gogh than I ever knew.  I couldn't take my eyes off of the screen.

If you would like to see it, someone has uploaded it to YouTube back in 2017.  However, I'm not sure if it's the full show.  The VHS tape is 88 minutes long, but this video is under 58 minutes.  It doesn't have the intro or the segment at the end in which Mr. Nimoy talks about the life of Theo van Gogh after his brother's death.  I can't say for sure if those missing segments account for the entire 30 minute difference, but I highly recommend that you check it out.  It's a wonderful show, and an incredible performance that you won't soon forget.