First Place Was Fun While It Lasted 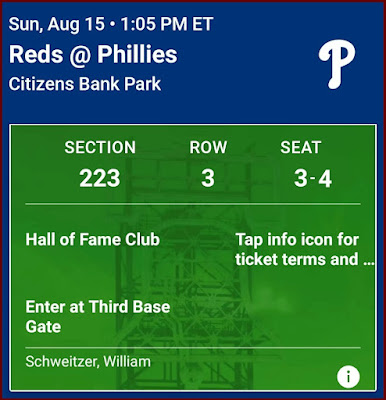 Sunday, August 15, 2021
Cincinnati Reds @ Philadelphia Phillies
Citizens Bank Park - Philadelphia, PA
Pitching: Sonny Gray vs. Aaron Nola
Results: Reds defeated Phillies, 7-4
The first baseball game I ever went to was on June 26, 1991.  It was a Florida State League game between the West Palm Beach Expos and the Sarasota White Sox that my dad and I went to at Municipal Stadium in West Palm Beach, Florida.  Pete Rose was in the crowd that night to watch his son play for Sarasota, and I got to meet him.  It's one of my most cherished memories.
Since that night, I've been to almost 100 different ballgames, including Class A, Double A, Triple A and MLB games.  I've been to Spring Training games, and games in both the regular season and the post-season.  I've never had a foul ball come anywhere near me in all of these games prior to the 2021 season, but I caught two of them this year.  The first one was on July 16th in the first game of a double header with the Marlins.  The second was in the top of the 8th inning this afternoon.  Phillies reliever Connor Brogdon was pitching, and Reds third baseman Mike Moustakas was the first batter of the inning.  I'm not sure what pitch of the at-bat it was, but Moustakas fouled it back directly at me on my right hand side, and I caught my second foul ball of the season.  A few pitches later, Moustakas fouled another pitch back to our section, but it was two rows lower than we were sitting, and it ricochet off of the wall and bounced into the lower level.  So, if you're going to to a game at Citizens Bank Park and you want to catch a foul ball, I'd recommend Sections 217 to 221. 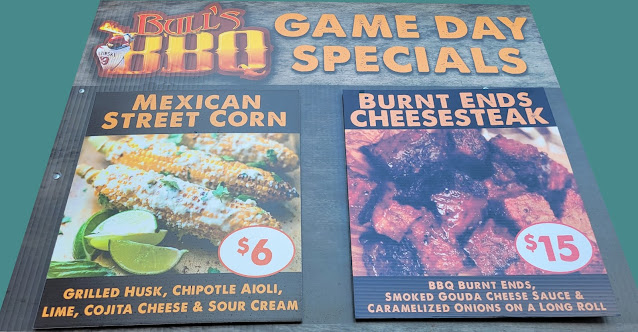 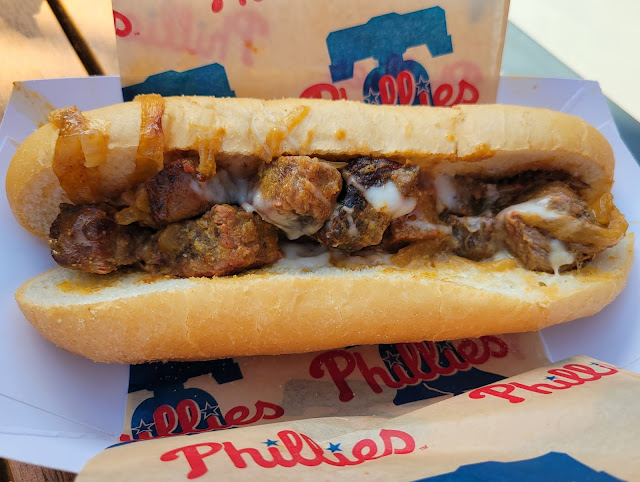 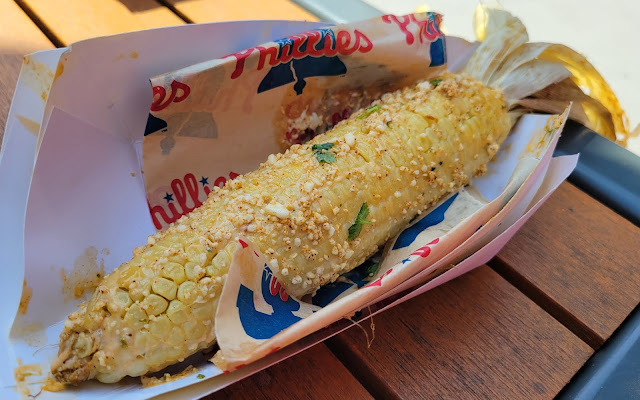 Dad's favorite place to eat at the ballpark is Bull's BBQ, so that's where we had lunch.  I had the Burnt Ends Cheesesteak, which is made of big chunks of barbecued meat ends, kind of like stew meat, served with smoked gouda cheese sauce and caramelized onions.  For a side dish, I had their Mexican Street Corn.  I got hooked on this stuff when I was in El Paso, so any time I see it on a menu, I've got to order one. 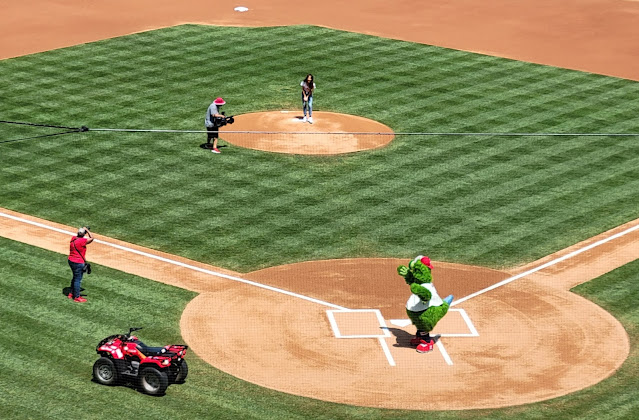 Actress Maggie Q threw out the ceremonial first pitch.  She's probably best known for her roles in Mission: Impossible III, Live Free Or Die Hard and the Divergent movie franchise, and was appearing at the game to promote her new movie, The Protégé, in which she stars alongside Michael Keaton and Samuel L. Jackson. 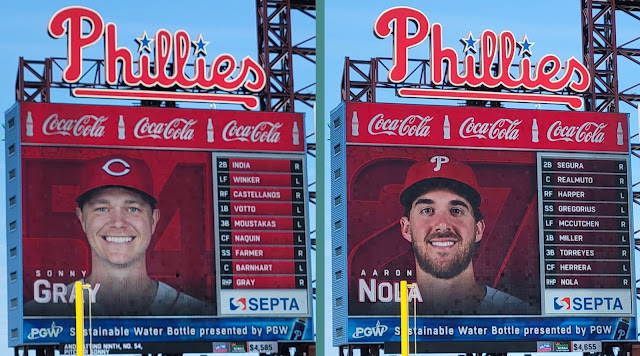 If you had told me before the game that Aaron Nola was starting and Nick Castellanos, Joey Votto and Mike Moustakas would go a combined 0-9 with six strikeouts, I would have bet a hundred bucks that the Phillies would cruise to an easy victory.  This is why I don't gamble, because I would have lost that money.  Votto had an especially disappointing game.  He was sitting at 1,998 career hits at the start of the game, so there was a chance that he'd reach the 2,000 hit milestone in Philadelphia, but he went 0-4 with a walk and two strikeouts in five plate appearances.
Reds second baseman Jonathan India led off the game with a solo home run, and they didn't give up the lead at any point in the game.  But before I get into the beating that the Phillies took at the hands of Sonny Gray and the Cincinnati Reds, I need to talk a little bit about the unexpected changes to the Reds corner outfield. 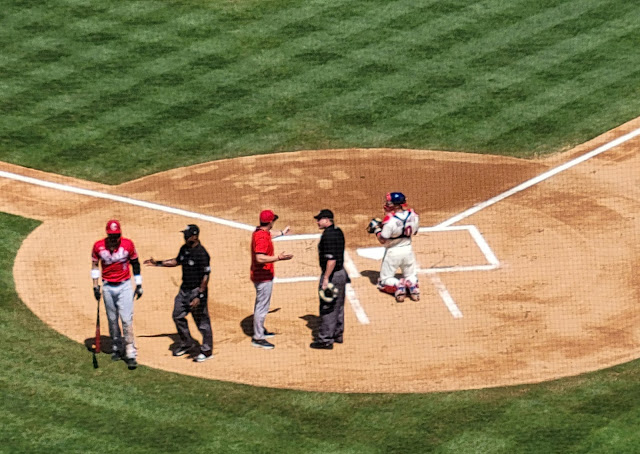 Home plate umpire Sean Barber was horrible had an inconsistent strike zone throughout the game with horrible calls that affected both teams.  Reds right fielder Nick Castellanos wasted no time in letting him know after he struck out on a questionable call in the top of the 1st, and he was promptly tossed out of the game.  Reds manager and former Phillies third baseman David Bell came out to argue in defense of his star, and he too was tossed from the game.
Karma came back to smack Mr. Barber in the back of the noggin later in the game when Odubel Herrera fouled off a pitch that bounced back.

The Reds lost the other half of their corner outfield when their left fielder Jesse Winker re-aggravated an injury that kept him out of the previous two games in the series.  He was pulled from the game when Cincinnati took the field in the bottom of the third. 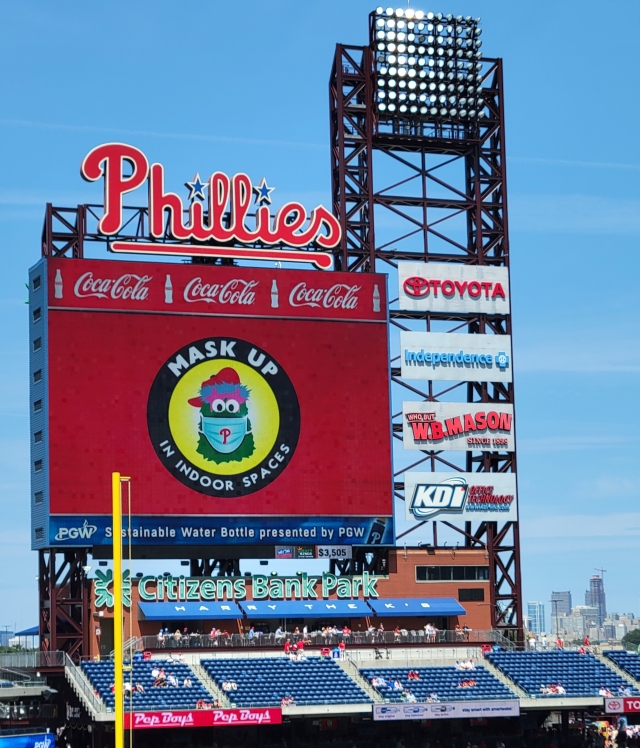 Nola has had a Jekyll and Hyde season this year.  There are days that he'll go out there and pitch like Tom Seaver, and there are days when he gets lit up like a Christmas tree.  Unfortunately, today was the latter.  He started the game with a fastball that hovered around 95 MPH, but his velocity dipped pretty fast and he started throwing his changeup more, which is not at all his best pitch.  He struggles to throw it for strikes and then occasionally hangs one that gets clobbered.
You would think that a team facing our #2 starter and losing two guys who were hitting over .300 on the season would have hurt the Reds chances.  Castellanos and Winker were replaced by Aristides Aquino, who's hitting .206, and Shogo Akiyama, who's hitting .221.  However, while Aquino didn't do much (0-2 with a walk), Akiyama went 2-4 with a two RBI double, and the Reds offense knocked Nola out of the game early.  He was up to 88 pitches and gave up 4 runs on 6 hits and 3 walks and was pulled after just 4 ⅓ innings of work. 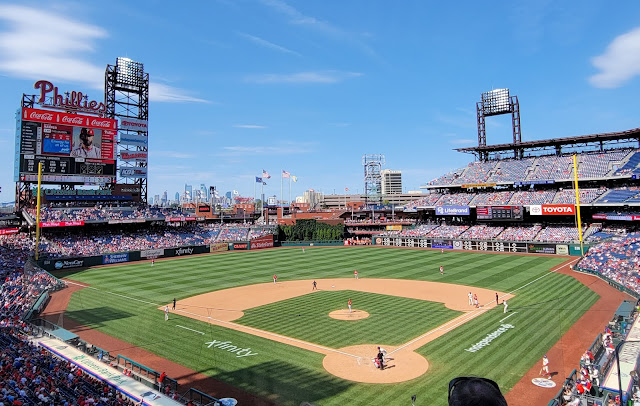 The Phillies had plenty of opportunities throughout the game to do some damage against Sonny Gray, but they couldn't put together a rally to take the lead.  The first chance they had was when JT Realmuto led off the bottom of the 4th with a triple.  He scored on a Bryce Harper sacrifice fly to give the Phillies their first run of the afternoon.  Before the inning was over, Philadelphia would once again have a runner in scoring position after Didi Gregorius and Brad Miller both drew a walk, but they wouldn't score again that inning.
They had an even better chance to take the lead in the following inning.  Odubel Herrera singled to lead off the bottom of the 5th.  Alec Bohm, who came into the game to replace Brad Miller at first base, reached on a forceout.  Jean Segura singled and JT Realmuto was hit by a pitch to load the bases for Bryce Harper.  I had hoped the Phillies would crack the game wide open with one out and the bases loaded for the heart of the order.  They did score, but it wasn't enough to take the lead.  Harper walked to score Bohm from third and Didi Gregorius hit a sacrifice fly to score Segura, but Lucas Sims was brought in to replace Sonny Grey and he stuck out Andrew McCutchen to end the inning.  The good news is that the Phillies narrowed the Reds lead to 4-3.  The bad news is that it was as close as they'd come to taking the lead all game. 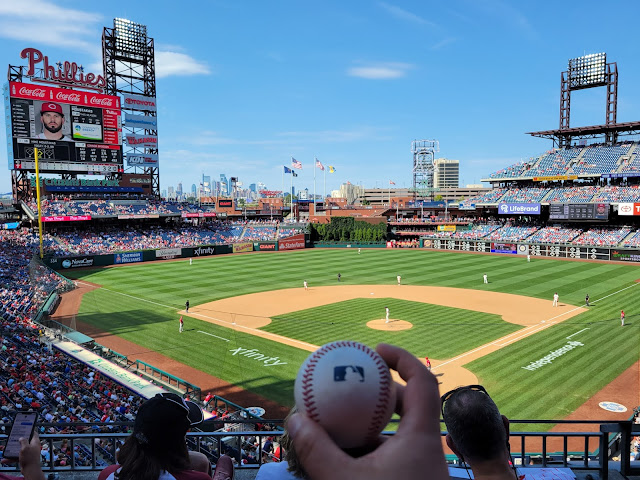 The top of the 8th started out well, but it ended badly.  Mike Moustakas led of the inning and fouled off a bunch of pitches (including one that I caught) until he popped one up for JT Realmuto for the first out.  Tyler Naquin hit one to deep right field that I thought had a chance, but Andrew McCutchen caught it for the second out.  However, things took a negative turn from there.  With two outs, Kyle Farmer singled and Tucker Barnhart hit an RBI double that knocked Connor Brogdon out of the game.  He was replaced by Hector Neris, who immediately gave up a two run homer to Tyler Stephenson to give the Reds a 7-3 lead.
The Phillies would get one run back in the bottom of the 8th.  Ronald Torreyes and Odubel Herrera hit back to back singles.  Alec Bohm doubled to score Torreyes.  Odubel should have scored too, but his baserunning is atrocious and the Phillies only managed to score one run in the inning.  It would be the last run of the game for either side. 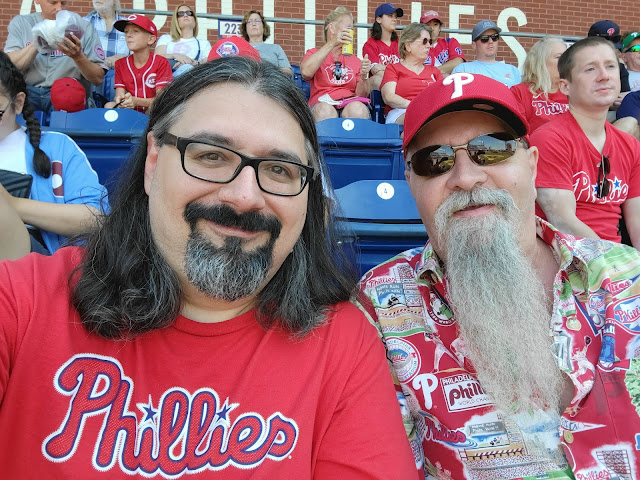 Baseball is a funny game.  The Phillies went into this series against the Reds on Friday in first place in the NL East.  They started Cy Young favorite Zack Wheeler on Friday and former team ace Aaron Nola today.  On Saturday, they started Matt Moore, who has been a complete disaster for most of the season.  So, how did it turn out?  The Phillies got hammered in both Wheeler and Nola's starts, and Moore dominated the Reds with six innings of no-hit baseball for the Phillies only win of the series.
With the Phillies loss and the Braves 6-5 victory over the Nationals, the Fightins were bumped to second place.  However, there's still plenty of baseball to play this season, and any day out with my pop at the ballpark is a good day.
The Phillies have taken a big hit with Rhys Hoskins and Zach Eflin on the IL.  Hopefully, they can get healthy and come back soon.  The Phils have an off day tomorrow before starting a series against the Diamondbacks in Phoenix.  The schedule is pretty easy for the rest of the season with quite a few games against teams that are currently under .500, so they still might pull off an NL East Championship.