Dick Tracy At The Drive-In 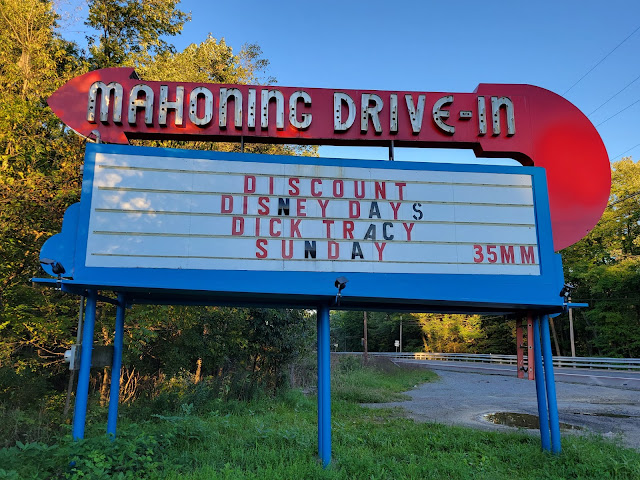 Dick Tracy
Mahoning Drive-In - Lehighton, PA
Unless you were around in 1990, I don't think it's possible to fully appreciate the marketing campaign behind the Dick Tracy movie.  It was released on June 15th, 1990, which was almost one year exactly after Batman debuted in theaters across the country.
Back in the late 80's and early 90's, the idea of a movie based on a comic book was very different than it is today.  The Marvel Cinematic Universe was limited to a handful of Saturday morning cartoons and a few low budget live action series and made-for-tv movies.  There were a few comic book movies based on DC Comics, most notably the Superman series starring Christopher Reeve, but they had pretty much died off in the early 80's with the poorly received Superman III.  There were a handful of other comic book movies to hit theaters in the 80's, but most of them were box office bombs, like Red Sonja and Howard The Duck.
The incredible success of Batman in 1989 changed everything, and it inspired Disney to go all in with a marketing blitz for Dick Tracy that was as massive as any campaign I have ever seen for any product.  Images from the movie and the comic strip were everywhere.  There were shirts, hats, wristwatches, posters, toys, records, video games, and just about anything else you can think of that featured the silhouette of the title character.
Naturally, there was a tie-in with McDonald's, including their Crimestopper Caper scratch off promotion that I wrote about last June for the 30th anniversary of the film.  There wasn't a Happy Meal toy associated with the movie, but they had plenty of signage and merchandise for the movie, including commemorative plastic cups and even a Dick Tracy fedora.  However, the most creative marketing that I noticed was the way that they sold tickets to opening night screening, which took place at 12:01 AM on June 15th, 1990. 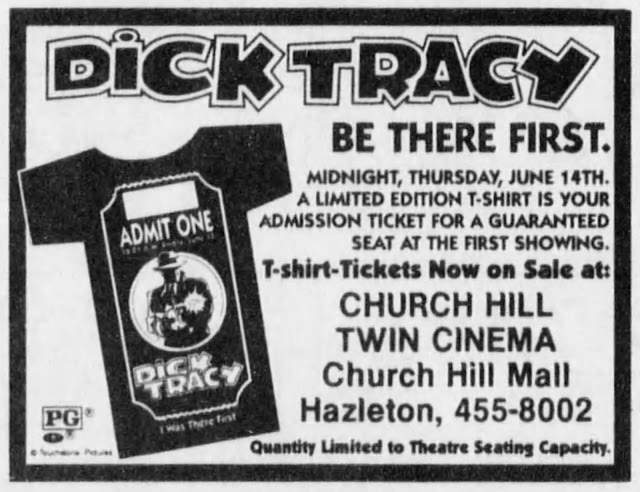 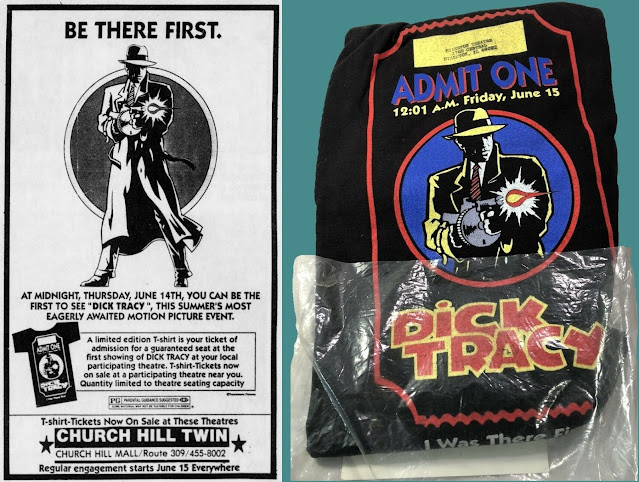 If you wanted to see the first showing of Dick Tracy, you had to go to the theater ahead of time and purchase a T-Shirt Ticket.  Each location that screened Dick Tracy on opening night received a limited quantity of these t-shirts based on the seating capacity of the theater, and people were expected to wear the shirt as their ticket to be among the first in the country to see the movie. 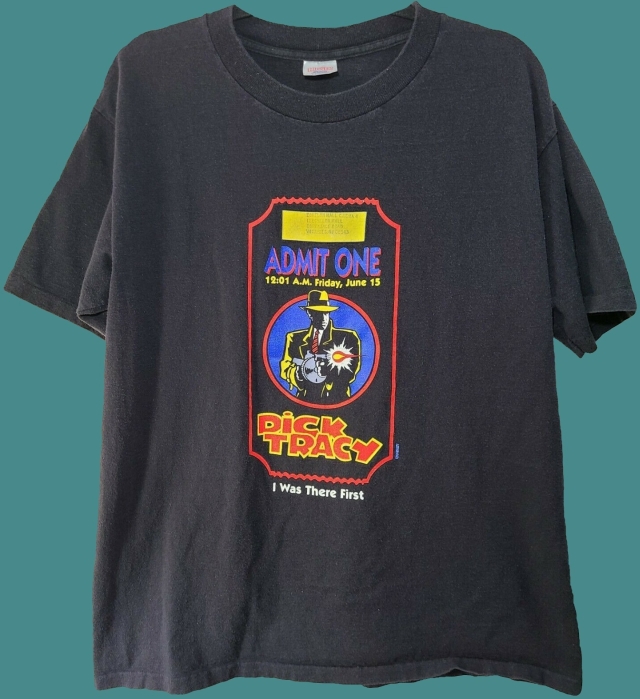 There was a little yellow rectangle at the top of the ticket stub on the t-shirt where each theater location stamped their name and address.  If you showed up at that theater at midnight wearing this shirt, you were admitted to see the film.
Each shirt also came packaged with an order form for a free poster of the special attraction that was shown in theaters before the start of movie.  It was a cartoon short featuring Roger Rabbit, Jessica Rabbit and Baby Herman called Rollercoaster Rabbit. 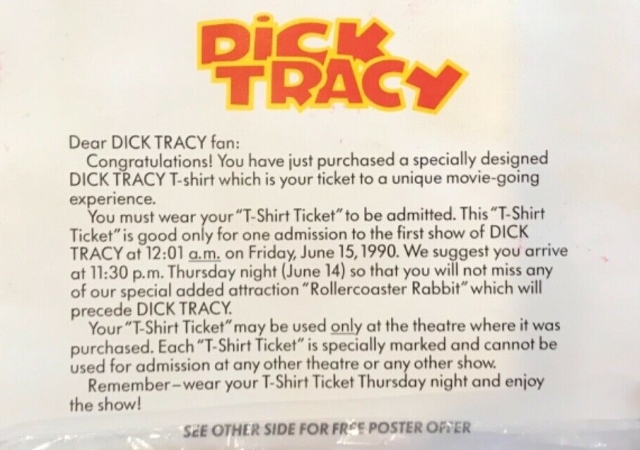 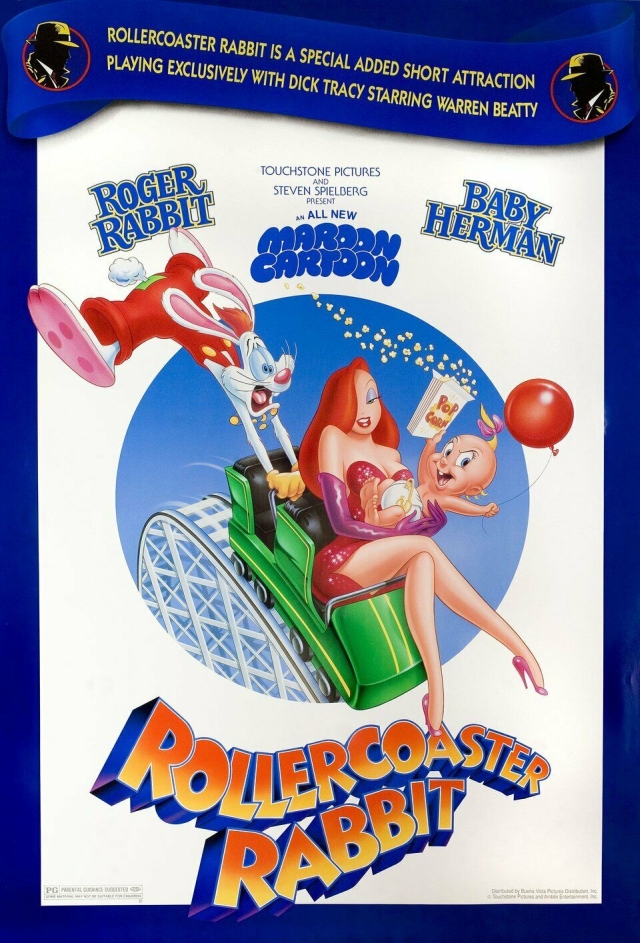 Steven Spielberg, who owned 50% of the rights to Roger Rabbit, wanted the cartoon to be shown before Arachnophobia, but Disney opted to show it before Dick Tracy instead.  It has been speculated that this annoyed Spielberg so much that he pulled the plug on another Roger Rabbit cartoon short that was in production, and that Disney's decision ultimately led to Spielberg refusing to allow them to use his character to film a sequel to their 1988 blockbuster: Who Framed Roger Rabbit. 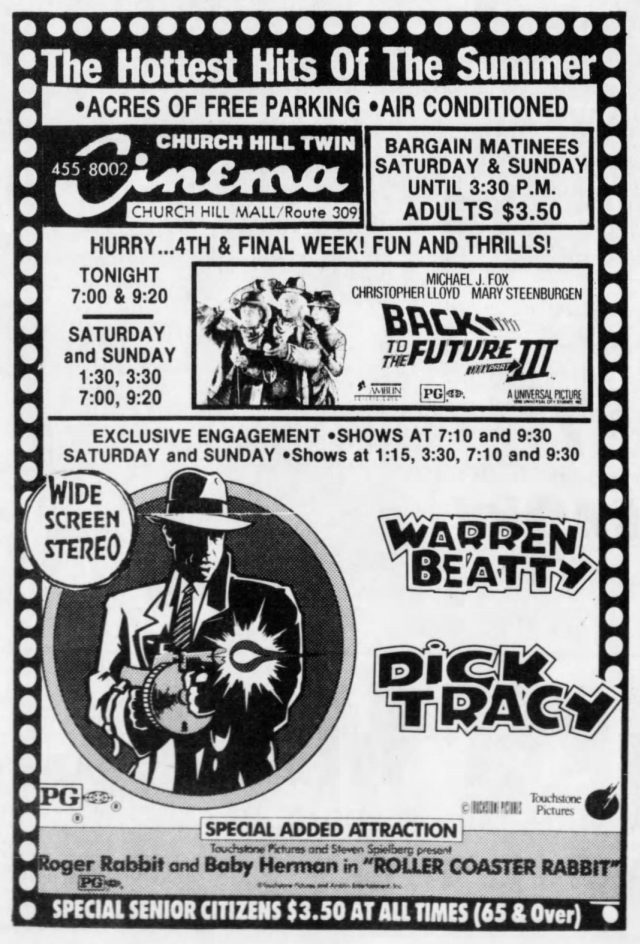 I didn't get to see Dick Tracy on opening night, but my grandfather did take me to see it at the Church Hill Cinema on opening weekend, and even though I didn't have a special T-Shirt Ticket, I was stylin' in my very own merch that probably came from Boscov's in the Laurel Mall. 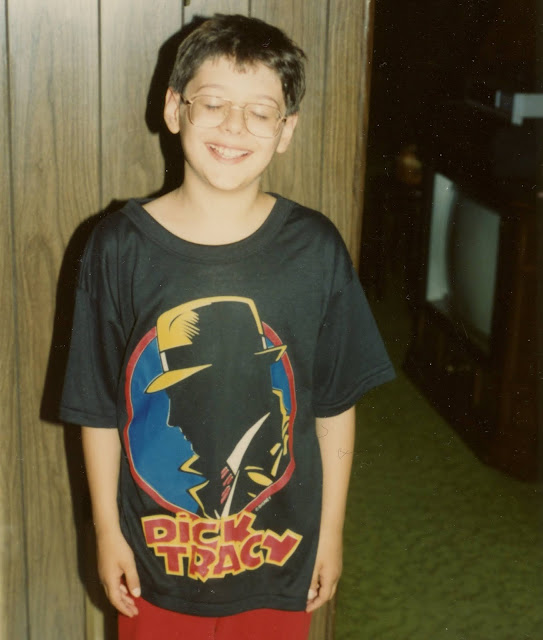 Geez, would you take a look at that big dork in the red shorts?  And check out that green carpeting in my grandparents living room!  They had the house recarpeted in the mid 90's while I was living in Florida, so by the time I came back, it was kind of a dark beige color.  I missed the heck out of that ugly green carpet! 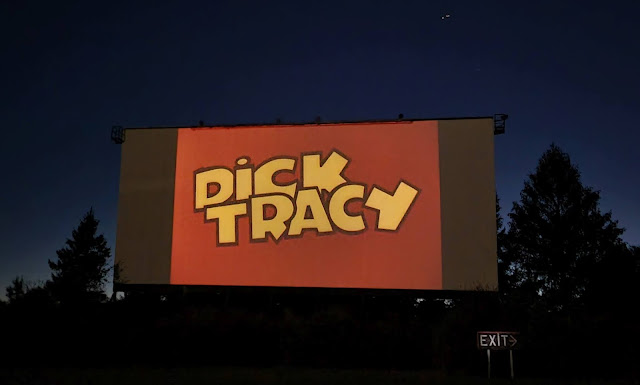 Fast forward to about 31 years after that photo was taken (give or take a few months) and I once again had the opportunity to see Dick Tracy on the big screen at the place that has been responsible for flooding my brain with good times and happy memories since I first set foot on the lot - the Mahoning Drive-In Theater in Lehighton, Pennsylvania.
Unfortunately, they weren't able to show the Rollercoaster Rabbit cartoon, but they showed a nice selection of trailers before the film, and the movie looked awesome on the big screen under the stars. 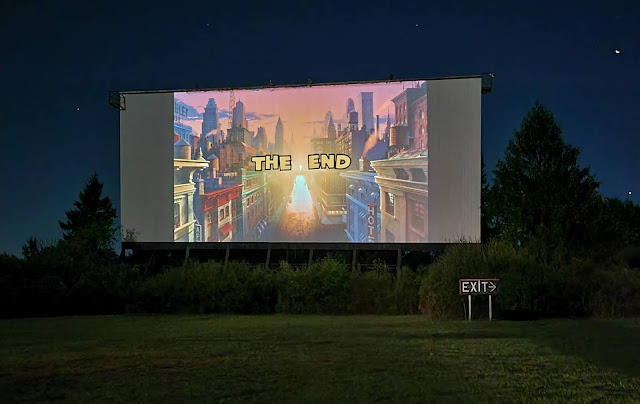 Unless there is a late addition to their current events schedule, Dick Tracy will be the last Disney Sunday night feature at the Mahoning Drive-In Theater for the 2021 season, but there's a lot left on the calendar, so expect more gushing praise for the drive-in to appear on this blog for the next six weeks.