Drizzle Guard
Dri-View Manufacturing Company
During the last episode of the Mahoning Drive-In Radio podcast, they played a commercial for an umbrella-like device that you set up over the windshield so that you don't have to use your wipers at the drive-in.  They used to sell them at drive-in theaters in the 50's and 60's.  It sounded like a decent idea, so I did a little research.  Ten eBay Bucks later... I became the proud owner of a new old stock Drizzle Guard. 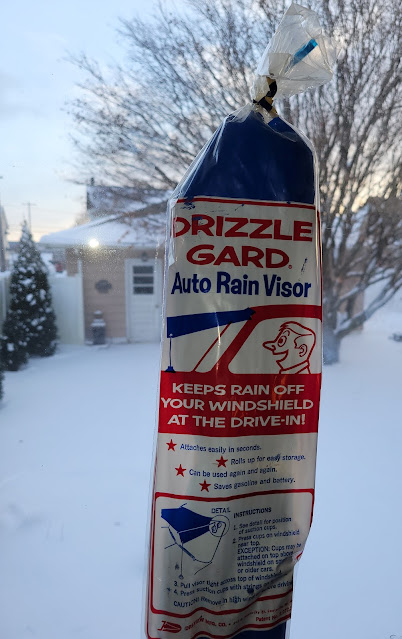 It may work, and it may not, but I'm looking forward to finding out.  It's not meant for heavy rainfall, so if we have anything like the storms that we got during VHS Fest and the second day of Joe Bob's Jamboree, this thing would turn into a kite and fly away in seconds.  However, for a light rainfall, it might work well enough that I won't have to keep the engine running and the wipers on.  My main concern is that it'll block out part of the screen, but what the hell, it's worth a shot.