King Kong Has It His Way 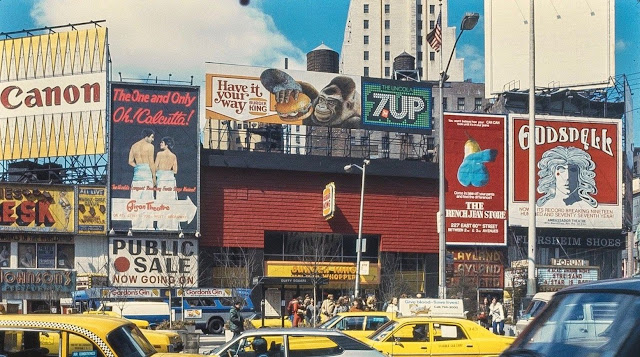 Times Square
New York, NY (1977)
Yesterday, I spent a little time reading a movie review blog called Apollo Twin.  The photo on the main page of that blog was taken at 46th and Broadway in New York City in 1978.  The shot looked familiar to me, and as it turned out, it was taken in the same year, at almost the same spot, and at the same angle as a photo that I posted here a few years ago.  I updated that post from December 2018 so that they could be compared side-by-side.  If not for the differences in the movie marquees and the fact that one photo has snow on the ground while the other doesn't, you could mistake them as having been taken on the same day.
While I was researching these photos, I came across this snapshot of the same section of 46th and Broadway that was taken a year earlier, if the Godspell billboard is to be believed.  You can see the edge of Howard Johnson's in the bottom left corner, and the Forum marquee showing A Star Is Born directly across from it on the right hand side of the photo.  The part that caught my eye though is the Burger King billboard showing what looks to be King Kong getting ready to eat a giant Whopper.