Excuse Me Russel, But I Believe I Requested The Hand Job 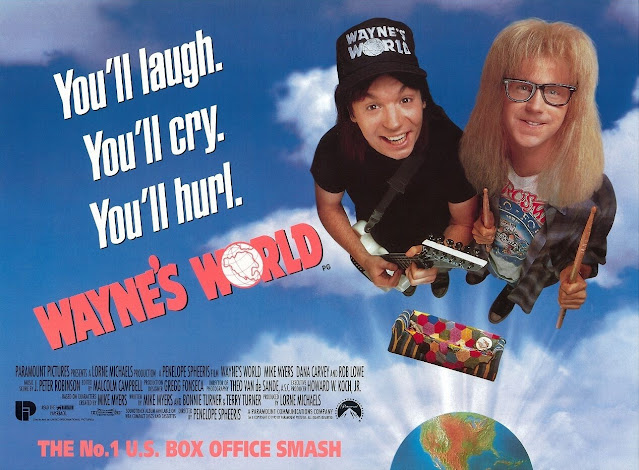 Wayne's World
Paramount Pictures (1992)
The highest grossing film that was based on a Saturday Night Live sketch has turned 30 years old this week.  Wayne's World was released on Valentine's Day 1992
I had just moved to South Florida to live with my dad, stepmom and stepsister a little over a month before this film was released.  The four of us went to see it at a theater called the Cinema N' Drafthouse in Palm Beach County.  That morning, Liz (my stepmom) explained to me that this was a combination of a movie theater and a restaurant, and that you ordered your popcorn from a waiter or waitress who brought it to your table.  I was 11 years old at the time, and this concept absolutely blew my mind.  South Florida was going to be awesome!
The movie was hysterically funny, and it became a frequent source of jokes in our family for the rest of the summer.  Liz in particular quoted the lines from it every chance she could - especially shouting "not" at the end of something, and saying "I was not aware of that" in the astonished tone and cadence that Wayne Campbell used when he said it to Alice Cooper, although I think she would misquote it as "I was unaware of that".  It also became the catalyst of the mixtapes that Stephanie (my stepsister) would make for me.  Wayne's World made me fall in love with Bohemian Rhapsody, and the idea of jamming to it in the car with three friends seemed like the coolest thing in the world to my sixth grade brain.  One of the tapes she made for me started off with Bohemian Rhapsody.  If you listen to this song with headphones, you'll hear different vocals come out of the left and right speaker, but because my sister's tape deck didn't copy tapes in stereo, my copy only had one channel, so about half of the vocals were omitted.  I got so accustomed to listening to this version of the song from my tape that I would sing along to add the lyrics that were dropped.