Give My Regards To Broadway Names 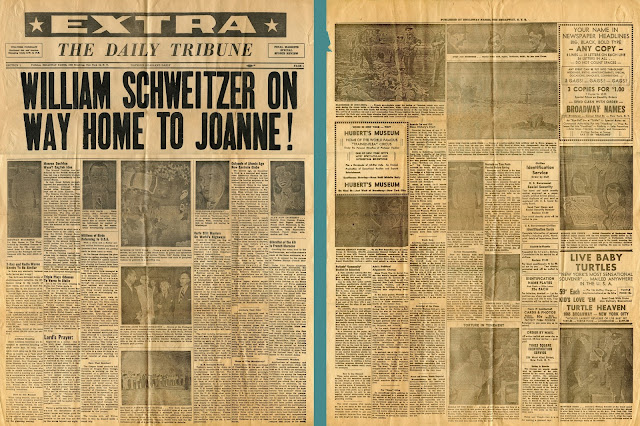 Novelty Newspaper
Broadway Names (1957)
My grandfather served in the US Navy after he graduated high school.  He had already began dating my grandmother before he was deployed.  When he was discharged in December 1957, someone ordered a novelty newspaper for my grandmother to celebrate his coming home.  It's printed on the same newsprint and is the same size as a real newspaper, so it looks pretty legit.  The only thing that would suggest the fact that it isn't real is the oversized headline. 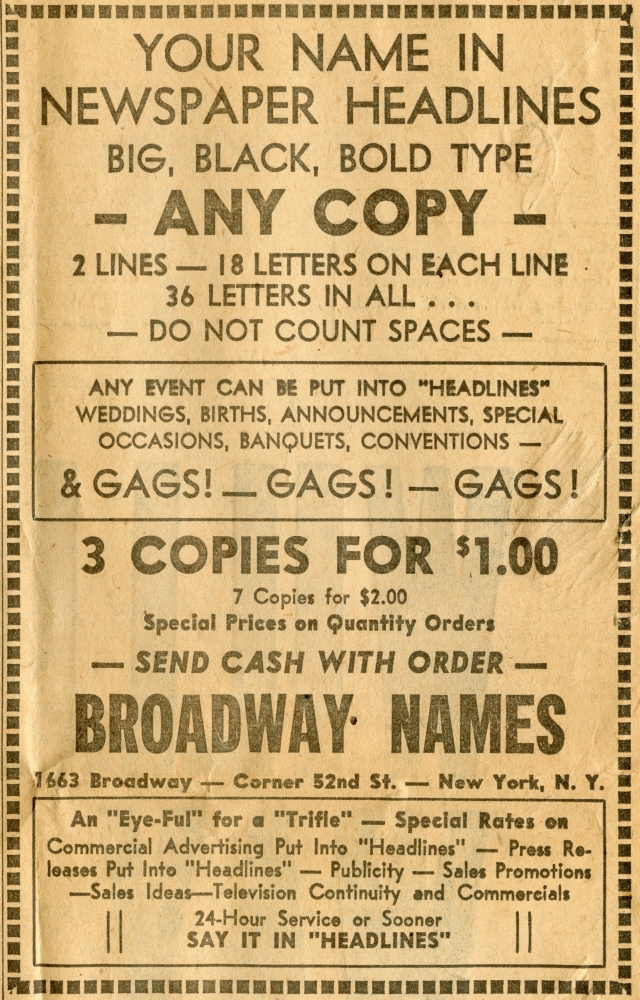 This novelty newspaper was produced by a company called Broadway Names in New York City.  There's an advertisement for them on the back of the page in the top right hand corner.  You could order three copies for $1 or seven copies for $2.  You got to choose up to 36 letters to appear in the headline with no mention of what the rest of the newspaper would contain.
Before we get into some of the more interesting things to be found throughout this paper, I was curious to know a little bit more about where this business was located.  I'm no expert on real estate, but 1663 Broadway on the corner of 52nd Street in New York City seems like it would be a pretty valuable piece of property in the theater district. 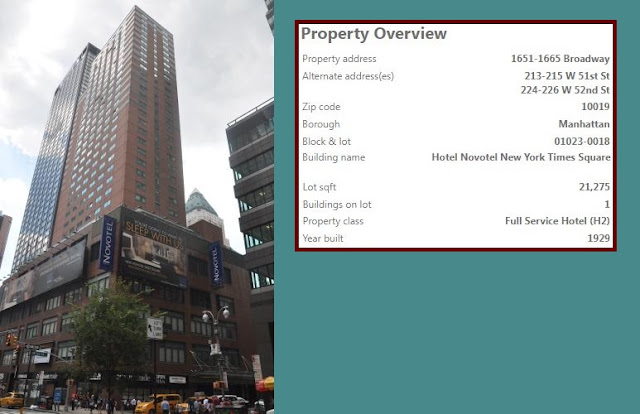 According to Property Shark, the block of 1651-1665 Broadway is occupied by the Novotel Times Square Hotel, which permanently closed in December 2020 due to the Covid-19 Pandemic.  Property Shark lists the building as having been built in 1929, but every other source I could find stated that the hotel, which is 35 stories tall and had 480 rooms, was built by Accor in 1984.
I'm not sure what it's being used for today, or if it's just sitting empty and waiting for a new tenant, but I'm reasonably sure that it's not being used as the base of operations for the sale of The Lord's Prayer engraved on a penny, which is just one of many things that were printed on the novelty newspaper. 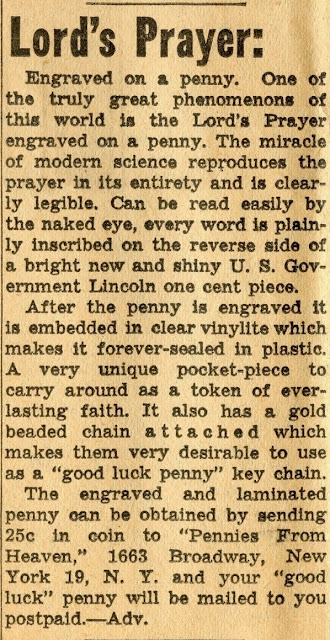 It might be a bit of a stretch to call it "one of the truly great phenomenons of this world" even for the 1950's, but at least it wasn't very expensive.  If you mailed a quarter to Pennies From Heaven at the same Broadway address that sold these novelty newspapers, they'd send you back a penny that has been engraved with The Lord's Prayer, sealed in a clear vinylite case and with a gold beaded chain attached.
If you want one of these and don't have access to Doc Brown's DeLorean to go back to 1955, you're in luck.  At the time of this writing, there are 86 different actions on eBay that have them for sale right now, though you'll pay considerably more than 25 cents.
This is probably the most normal thing printed on this paper.  It only gets stranger from here. 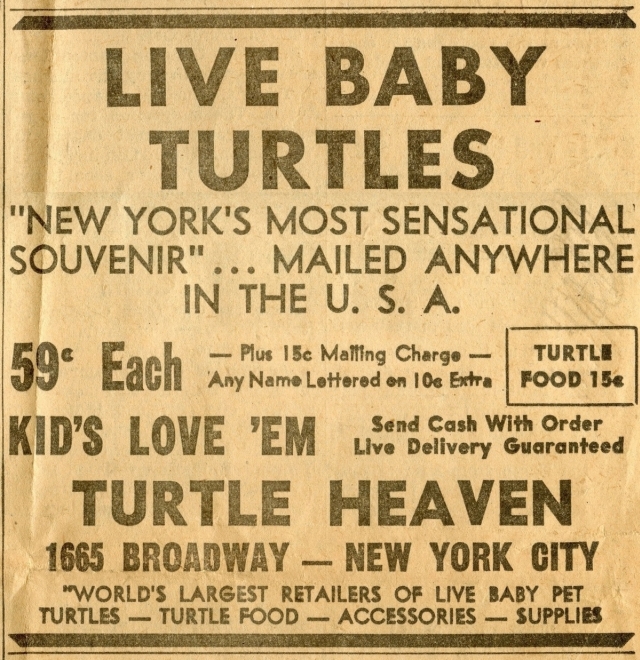 Right next door to Pennies From Heaven is Turtle Heaven; allegedly the world's largest retailer of live baby pet turtles.  I'm not sure what disturbs me more - that they were sending baby turtles through the mail, or the fact that they would paint your name on its shell for an extra dime.  Neither of these things are good for a turtle's health despite their assurances of "live delivery guaranteed". 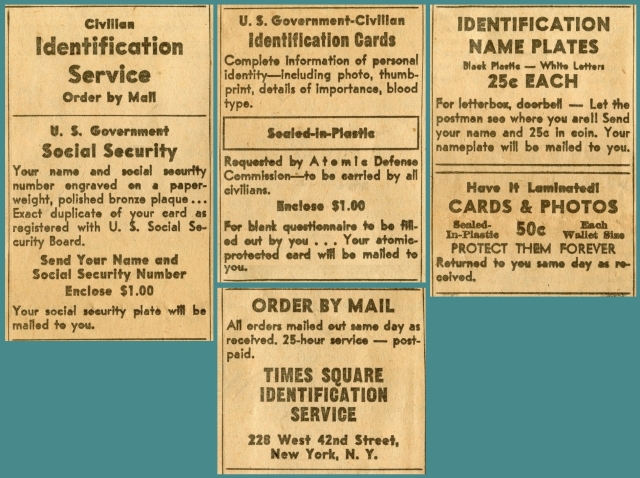 Here we have a number of products available from a company called Times Square Identification Service.  There's nothing too unusual about a plate with your name engraved on it to put on your mailbox or doorbell for a quarter, or lamination services for your cards and photos.  However, I don't think it's an especially good idea to have an exact replica of your Social Security card engraved on a paperweight or a polished bronze plaque.
This company also offered US Government Civilian Identification Cards.  The ad claims that the Atomic Defense Commission has requested all civilians to carry this card.  It's a pretty chilling reminder of the threat of nuclear war that everyone lived under in the decades after World War II, but the advertisement is a bit dubious at best.  As far as I can tell, there never was an official government organization called the Atomic Defense Commission.  The closest I could find was a proposal by Senator Harry P. Cain to replace the Atomic Energy Commission, which was controlled by civilians, with a new department called the Atomic Defense Commission, which would be controlled by the military and report to the Secretary of Defense.  That never happened, and the Atomic Energy Commission continued to function until it was abolished in 1974.  With the way things are going in the world today, who knows?  We might soon find ourselves in another Cold War that will require us to go back to the days of civilian ID cards and duck-and-cover drills... if we're not there already. 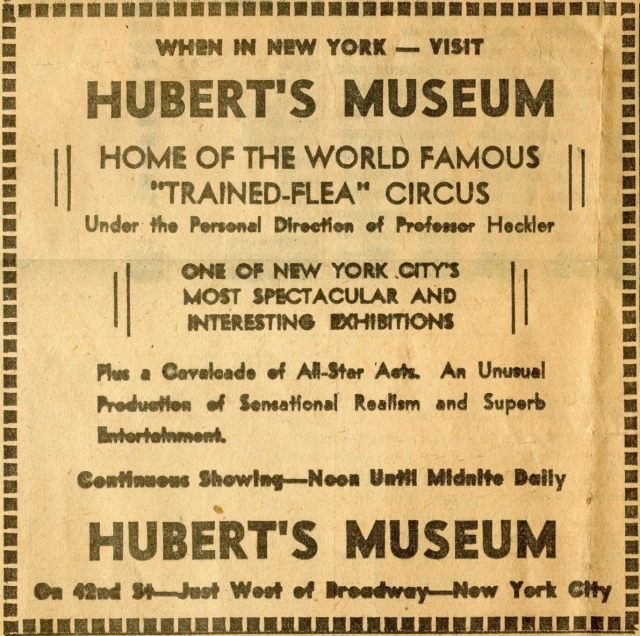 Hubert's Museum has a pretty interesting history.  It was in operation in Times Square at 234 West 42nd Street (between 7th and 8th Avenues) from 1925 to 1965.  In its 40 year history, it was the home of performances by Jane Barnell (the bearded lady from the 1932 movie - Freaks) and Jack Dracula.  The location where this once stood is now home to the Ripley's Believe It Or Not Odditorium, which is a really nice touch.  I wonder if they still have some of the old displays from Hubert's Museum there.
I'm going to have to do some more research on this place to write more about it later, because what little I have already learned about it has fascinated the hell out of me.

The news articles that were used for this novelty newspaper are almost as random and puzzling as the advertisements.  If something like this were to be made today, they'd probably just create a bunch of made up funny stories that are loaded with bad puns.  Back in the 50's when this newspaper was put together for Broadway Names, they just used real articles that were cut out of actual newspapers throughout the Spring and Summer of 1951.  The four above were from April and May that year.  The first thing that caught my interest on this paper at all was the photo of Ralph Branca with the caption of "Tempts Bad Luck" for his #13 uniform.  This photo ran in newspapers across the country five months to the day before he would give up the famous Shot Heard 'Round The World to Bobby Thompson.
The decision to use real newspaper articles as the template for their novelty newspaper is understandable.  It gives the finished product more of a sense of realism, and it probably saved a bit of time and money.  You might expect that they'd make an effort to find light-hearted stories, like maybe a pet cat stuck in a tree, or a book donation to the library, or maybe somebody who bowled a 300 game, but that was not the case.  The end result is a collection of stories that are anything but light-hearted, with references ranging from bombs to bull semen.  Hell, they included photos of dead bodies in this thing.  Imagine if a company were to do this in 2022.  Extra - Extra - Read all about it!  Little Timmy turns 10 years old today, and oh yeah, here's a dead gangster from the 50's.  Happy birthday! 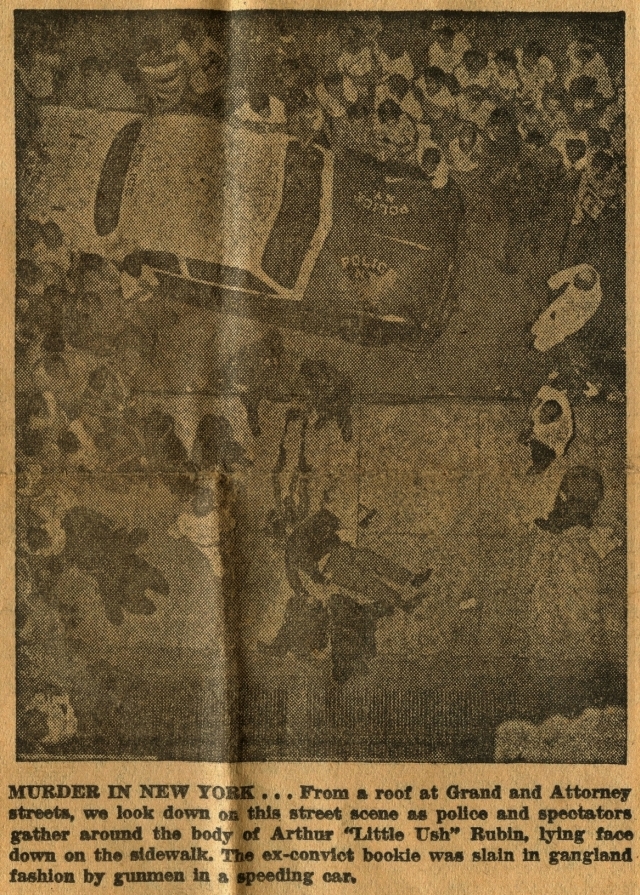 Right below the novelty headline in the dead center (no pun intended) is a photo that was taken from the rooftops of the body of bookie Arthur Rubin (aka: "Little Ush") who was killed in a drive-by in the Lower East Side.  I couldn't find too much additional information about this incident.  Most of the newspapers who covered the story used the exact same photo and caption that appeared in the novelty paper.  However, the earliest mention I was able to find of it was from August 12th, 1951.  The St. Louis Post Dispatch gave a bit more information, stating that the deceased was 34 years old and had been carrying a pistol, but "failed to draw it fast enough to use it". 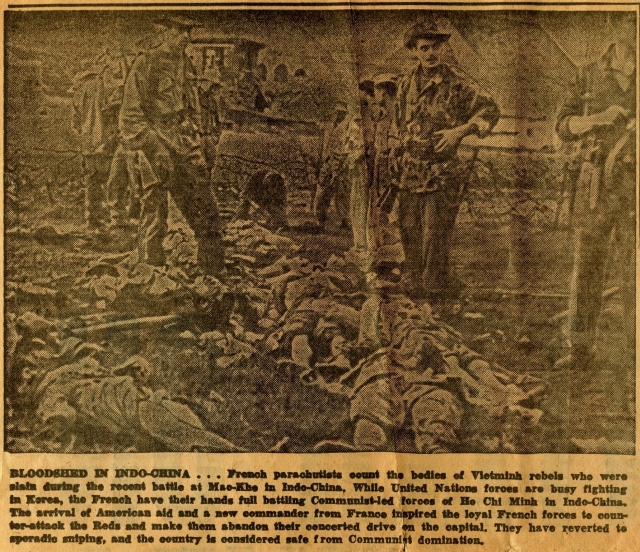 If one body isn't creepy enough for you, here's a shot from the Battle of Mạo Khê in the First Indochina War.  The battle took place from March 23 to March 28, 1951, and the photos ran in most of the papers that carried it in the first week of May later that year.
And now for something a bit lighter, but not a bit less strange. 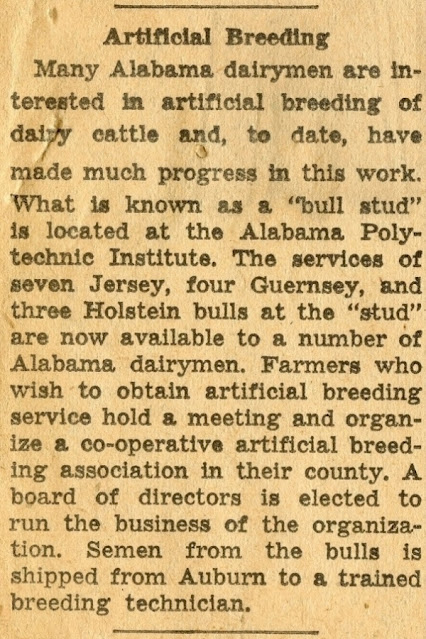 Just in case you were interested in how to acquire bull semen for the purposes of breeding cattle, the folks at Broadway Names have helpfully included this article.  I didn't bother to do any research on what newspapers this appeared in, and unless you want Google to surprise you with a few interesting new advertisements, I suggest that you don't either. 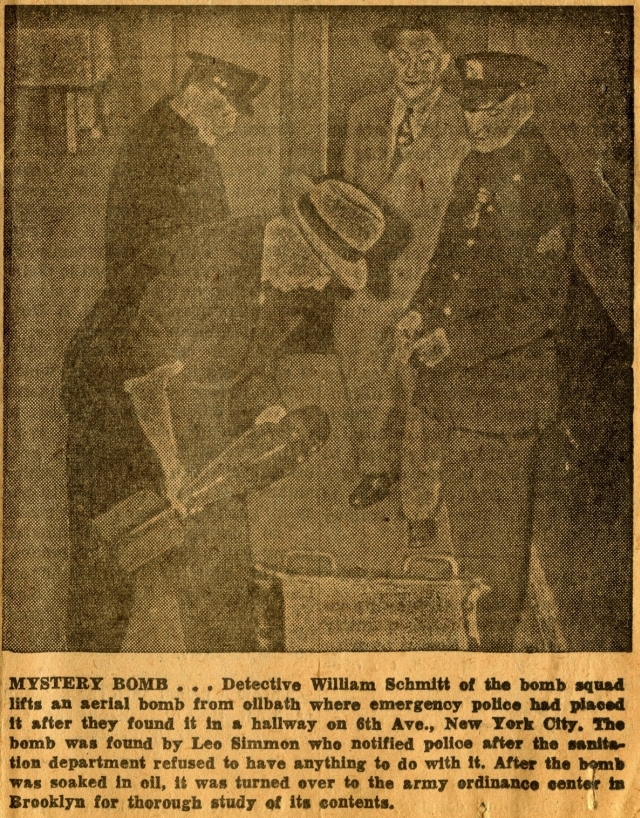 Out of all of the random stories and photos on this paper, this is the one that I wish I could have learned more about.  A man named Leo Simmon discovered an aerial bomb in the hallway of a building on 6th Avenue in New York City.  I was able to find dozens of instances of this photo with the same caption, but not a single word from a follow-up story about where it came from.  Maybe they never found out. 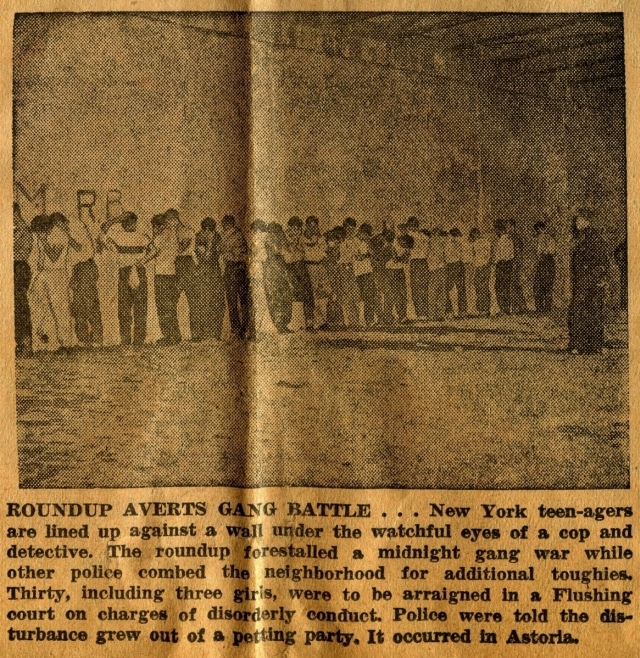 Police officers in Astoria, Queens rounded up thirty teenagers (including three girls) on a disorderly conduct charge to prevent what they expected to be a midnight gang war.  That in itself would be the foundation for an interesting movie idea, however it's the second to last line that really caught my eye - "Police were told the disturbance grew out of a petting party".  Petting party, you say?  If ever two words from an old news article from the 50's begged to be Googled, it is these two.
As it turns out, a Petting Party is exactly what the name suggests.  They began in the 1920's and were gatherings where high school and/or college students got together for sexual experimentation that stopped just short of having sex.  It's an interesting concept.  According to NPR, this phenomenon began to fade in the 1930's, but as this photograph from a 1951 newspaper suggests, it hadn't died out entirely. 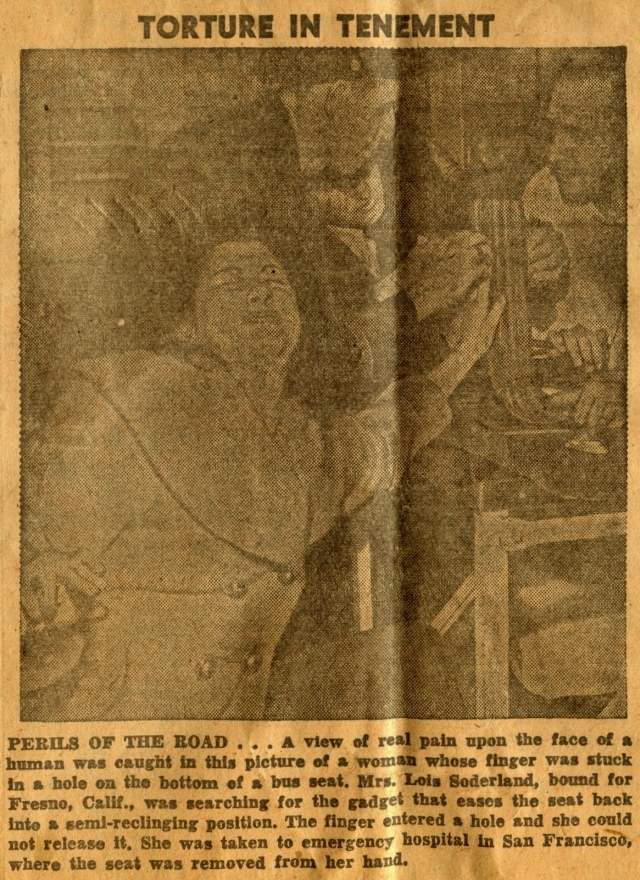 Finally, we have the story of poor Mrs. Lois Soderland, forever immortalized in newsprint with her finger stuck in a bus seat.  She had been trying to recline the seat so she could lay back, but her finger "entered a hole" and she couldn't pull it back out.  They had to take her and the bus seat to the emergency room to have it removed.
Now... THAT'S the kind of story you expect to see in a novelty newspaper, and it deserves a closer look.
There are other oddities to be found in this novelty newspaper, but I'll leave those for someone else to research.
As I write this, I have to wonder about the time when it was purchased.  I don't know if my grandfather bought it for my grandmother, or if maybe one of my grandmother's friends ordered it to surprise her.  I'm sure they looked at it for a few minutes, chuckled at the headline, and then put it in a drawer with a bunch of other photos and mementos from the years before they got married.  It might have gotten shuffled around a few times until it was packed up in a box and stuffed in the back of their attic where it sat undisturbed for half of a century.  My grandfather died in 2011 and my grandmother followed less than a year later.  The box that held this newspaper was one of many that I packed into my car and brought over to my house, where it once again got packed away in an attic for nearly another decade.  Then a global pandemic struck, and their sentimental grandson decided to spend some of his time in quarantine digging through old boxes of photos in the attic.
Maybe somebody else will stumble across this newspaper years from now.