Frustration And Hope In Philadelphia 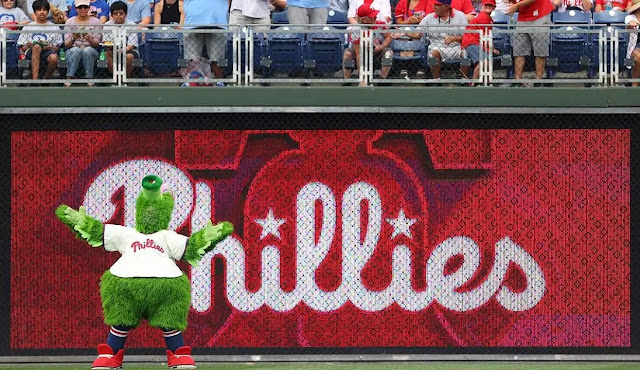 After 98 days, the MLB Lockout has finally come to a close.  As of March 10th, teams are once again able to complete trades and sign free agents to MLB contracts as they prepare for the 2022 season.  I won't pretend to be an expert on unions or labor negotiations, and unless either side is willing to hand me a couple of season tickets, I'm not picking a side in this fight.  My concern for team finances and player salaries are exactly the same as their concern for my financial situation, which is to say I don't care at all.  My thoughts on the lockout are pretty simple: if they play, I'll be in the stands watching.  If they don't, I'll spend my money on something else that I enjoy.  Thankfully, the two sides came together on a five year CBA, so this won't be a problem again until after the 2026 season at the earliest.  Moving on...
The Phillies made a few moves prior to the start of the lockout that I wrote about back in December.  To summarize, they signed closer Corey Knebel (1 year, 10 million) and utility infielder Johan Camargo (1 year, 1.4 million).  Additionally, the Phillies acquired two backup catchers in trades: Garrett Stubbs (from the Astros) and Donnie Sands (from the Yankees).  They also picked up RHP Nick Nelson in the same trade that brought Sands to the Phillies, and they picked up four additional relief pitchers on waivers: Yoan López (RHP - Braves), Ryan Sherriff (LHP - Rays), Kent Emanuel (LHP - Astros) and Scott Moss (LHP - Guardians).
We also learned that two longtime Phillies will not be returning in 2022.  Backup catcher Andrew Knapp has signed a minor league contract with the Reds, and one of my favorite players, closer Hector Neris, signed a two year contract with the Astros.  We lost another favorite of mine when shortstop Freddy Galvis signed with a Japanese team.  Finally, relief pitcher JD Hammer returned to the Colorado Rockies organization just before the start of the lockout.
Teams were free to sign players to minor league contracts during the lockout.  The Phillies added quite a few players to the farm, including Justin Williams, Josh Ockimey, Andrew Bellatti, Jake Newberry, Joe Gatto, Tyler Cyr, Michael Kelly, Yairo Munoz, James Marvel, Drew Maggi, Karl Ellison, Joe Genord, Aaron Barrett and John Andreoli.  I don't know too much about any of these guys and I haven't done too much research on them yet, but there are more than a few names in this lot that have had experience in the big leagues.  Additionally, they re-signed relief pitcher Cam Bedrosian to a minor league contract.  Cam is the son of former Phillies Cy Young Award winner Steve Bedrosian, so I'm especially happy to see him back with the team. 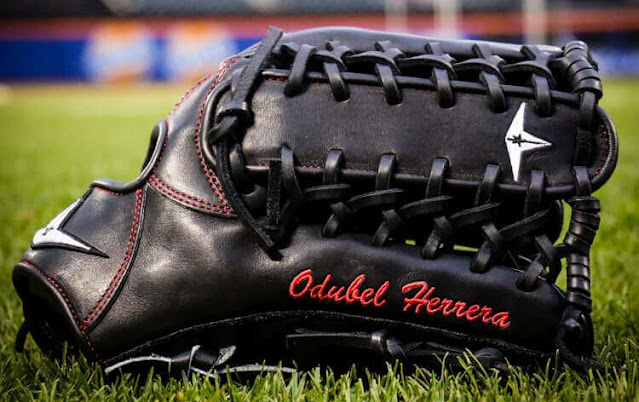 One of the reasons I was looking forward to the 2022 season is the fact that it marked the end of the Odubel Herrera contract extension.  I really liked this guy when the Phillies first picked him up in the Rule 5 Draft in December 2014.  He had a productive rookie season in 2015, and he was an All-Star and a Gold Glove finalist in 2016.  However, it became pretty hard to ignore some of his poor decisions on the field.  He struck out quite a bit, his routes in center field were bizarre, and his base running was downright atrocious.
Unfortunately, his poor decisions were not limited to baseball, and he was taken out of the Phillies lineup after he was arrested for domestic violence in late May 2019.  He was DFA'ed after the 2019 season, and I expected that this was the last that we'd see of Odubel Herrera in Philadelphia.  However, it didn't quite work out that way.
Odubel signed a five year contract extension prior to the start of the 2017 season, and the CBA between Major League Baseball and the Players Association doesn't allow a team to take disciplinary action against a player for domestic violence beyond what is decided by the league.  So, after he served his MLB suspension, he was back with the organization.  At this point, I expected that the team would stash him in Triple A for the remainder of his contract, but he was back in the big leagues in 2021 for what was the final guaranteed year of the contract extension he signed five years earlier.
The Phillies had a team option on his previous contract to keep him for the 2022 season.  It was declined, and I thought that we had finally moved on from this man, who has been a complete disaster both on and off the field.  Sadly, that is not the case, as for reasons I cannot possibly understand, the Phillies re-signed Odubel Herrera to a one year contract with the expectation that he will platoon in center field with Matt Vierling.
This decision by the Phillies front office had me utterly disgusted in the team, much in the same way that I was when the Eagles signed Michael Vick.  I don't think there's any excuse or justification for this move.  If there wasn't anybody else they could sign or trade for, they could have just let Vierling start in center field this season.  If they didn't want to do that, they have two first round draft picks in Adam Haseley and Mickey Moniak, both of whom are left handed and could platoon with Vierling, and both of whom play a better defensive center field than Odubel.  I don't want to hear any bullshit about people deserving second chances.  He got his second chance by avoiding prison when his girlfriend decided not to press charges.  There is no valid excuse for bringing this man back to Philadelphia to play baseball in 2022.  None.  Period.  End of discussion. 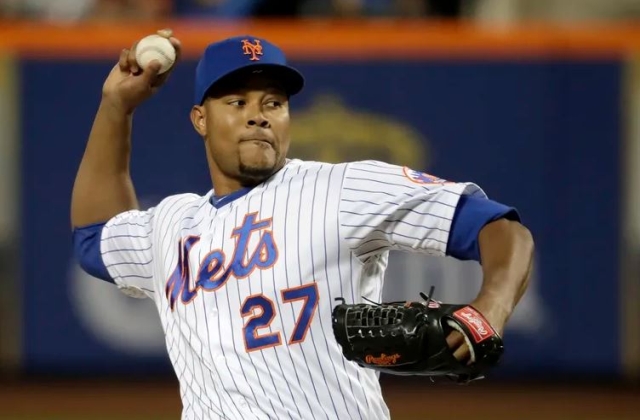 My feelings about the Phillies decision to sign former Mets closer Jeurys Familia are complicated.  Like Odubel, he was arrested for domestic violence after an incident that allegedly occurred on Halloween 2016.  Unlike Odubel, the charges were dismissed and expunged from his record, and an investigation by the league (which both Familia and his wife - the alleged victim of the incident) found that he did not threaten or assault anyone on the night in question.  So I guess if the police, the league, and his wife are all in agreement that the alleged incident never happened, who the hell am I to say that I know better.  Still, it's not an especially good look for a team to go out of their way to sign two guys who have been arrested for domestic violence in the past six years.
He's signed to a one year deal for $6 million.  From a strictly baseball perspective, I don't know what to expect out of this guy.  Like Odubel, he was an All-Star in 2016, and he was one of the best closers in the National League at one time, but he hasn't put up numbers that are anywhere close to his peak over the past five seasons.  The best case scenario that I can see is that he rebounds in his age 32 season and can be an effective setup man for Corey Knebel. 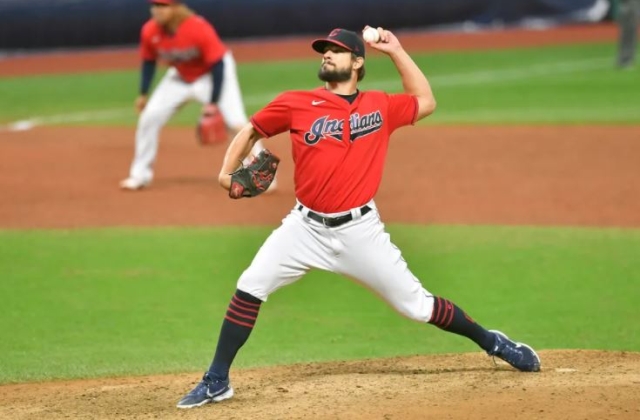 The Phillies signed another former All-Star reliever to a one year contact for $6 million when they brought lefty Brad Hand to Philadelphia.  This is the bullpen acquisition that I'm the most optimistic about.  Like Familia, Hand was once a highly effective closer.  He was a three-time All Star from 2017 to 2019 with the Padres and Indians, and he was a perfect 16 for 16 in save opportunities in the Covid-19 shortened 2020 season.  He started last season with the Washington Nationals and was off to a good start before he was traded to the Blue Jays at the deadline.  He struggled in his 11 appearances in Toronto and was placed on waivers.  The Mets claimed him on September 2nd, and he seemed to settle down pitching in New York for the last month of the season, so there's a lot of reason to hope that he could bounce back.  If he pitches anything like he did from 2017 to 2020, it wouldn't shock me too much if he steals the closing job off of Knebel. 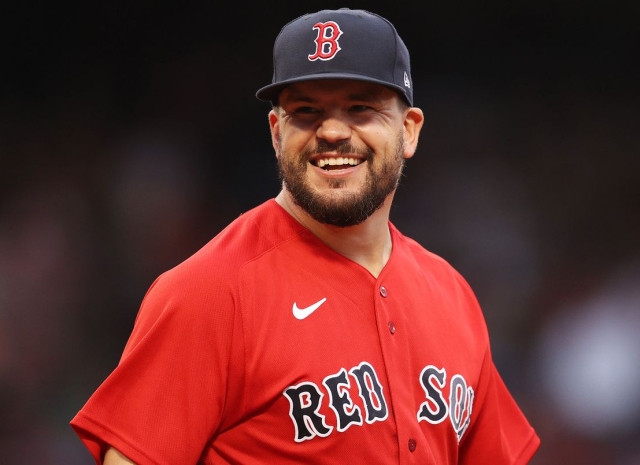 The biggest signing happened on Wednesday when the Phillies signed slugger Kyle Schwarber to a four year, $79 million dollar contract.
When the off-season began, I was hoping that the Phillies would have signed Kris Bryant because he could take over at 3B if the need arose, but the more time I've had to think about it, the more I've convinced myself that Schwarber is the right move.  He's 29 years old, so a four year contact at under $20 million AAV is very team-friendly.  He is a huge power upgrade over Andrew McCutchen in left field, and his OBP suggests that he could be the leadoff bat that the Phillies have been missing in their lineup.  He bats left handed, so he fits perfectly at the top of the order hitting in front of Segura (R), Harper (L) and Hoskins (R).  He has post-season experience and was a valuable bat in the lineup for the Cubs in the 2016 World Series, batting .412 with a .500 OBP against the Indians after missing practically the entire regular season due to injury.  He is the right player at the right time, and I'm very glad that he's coming to Philadelphia.
This signing puts the Phillies $10 million under the Luxury Tax threshold.  Now, I have long since given up on the idea of the Phillies going over the threshold.  They haven't ever done it before, and I had zero expectations that they were going to start now.  I'm still digging my feet in and saying that the Phillies are finished with major free agent signings for the 2022 season, but damn Jayson Stark for giving me reason to hope. 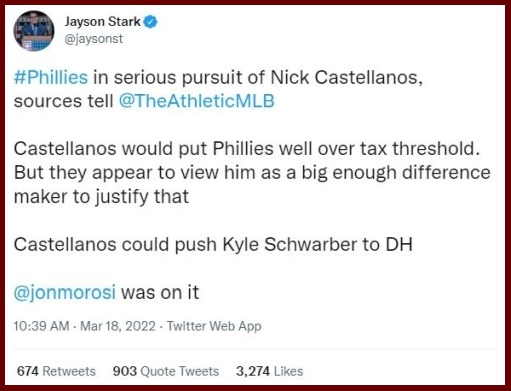 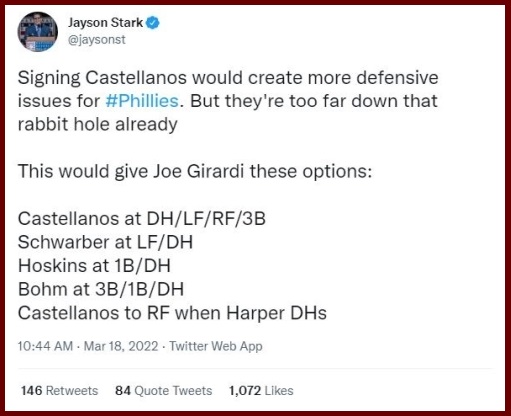 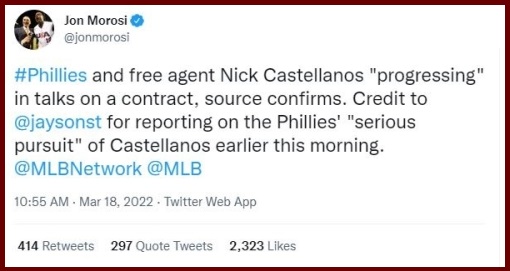 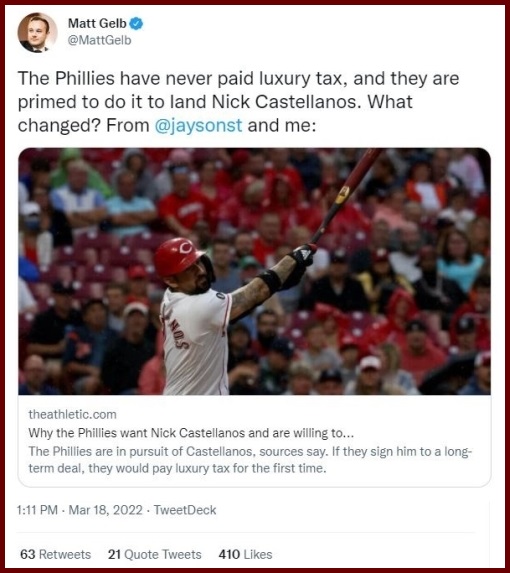 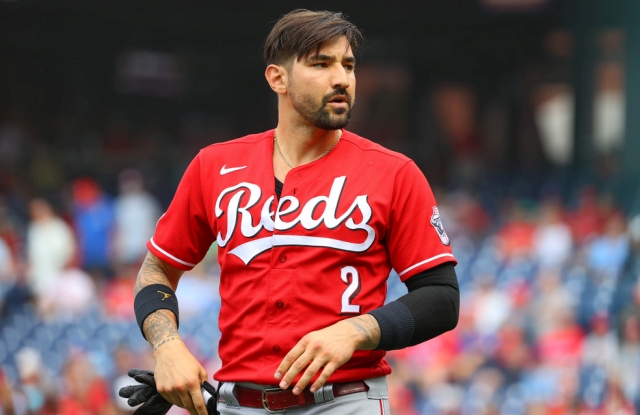 I am really, really, really trying not to get my hopes up here.  The Phillies were known to be interested in signing Schwarber or Castellanos, but I doubt that even the most optimistic of fans entered into this off-season believing that the Phillies would sign BOTH of them.
Jayson Stark's tweet from 10:44 says it all.  While this signing wouldn't make the Phillies an especially strong defensive team, it would give them a lot of versatility now that the designated hitter has been brought to the National League.  It would give the Phillies power from both the left and right side of the plate, and if Alec Bohm can bounce back to his 2020 production, the Phillies could have one of the most dynamic offensive teams in the league.
Imagine this lineup:
I know I'm jumping the gun by allowing myself to get excited before it happens.  I've been trying to remind myself for the past day that the Phillies have never gone over the Luxury Tax threshold.  Never.  Not even once.  Not even by a dollar.  In fact, they've gone out of their way to get right up to the edge of the Luxury Tax and then stop short of making that extra move that could have gotten them to the post season.  But maybe... just maybe... this will be the season where the front office finally goes all in for a championship season.
UPDATE (9:40 AM): It has been reported late last night that the deal has been completed.  We're still waiting for the official announcement from the team, but numerous credible sources have reported that Nick Castellanos has signed a five year, $100 million dollar contract with the Phillies that will keep him in Philadelphia through his age 35 season.  The deal contains no opt out clauses, and it gives the Phillies their most powerful lineup since the 2007-2011 era.
Things have just gotten a lot more interesting in Philadelphia!