Senators Down The Hot Dogs 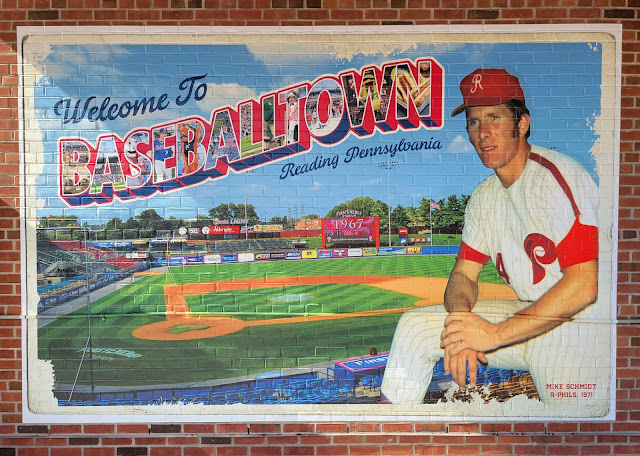 It's been less than a full year since we were last at FirstEnergy Stadium to see a Reading Phillies game, but it feels like a completely different world.  This time last season, the team was only selling a limited number of tickets with socially distanced seating throughout the ballpark.  Yesterday, with the exception of maybe one or two people who I saw were wearing face masks, it felt as if the pandemic was completely over.  That wasn't the only difference from the last game I attended. 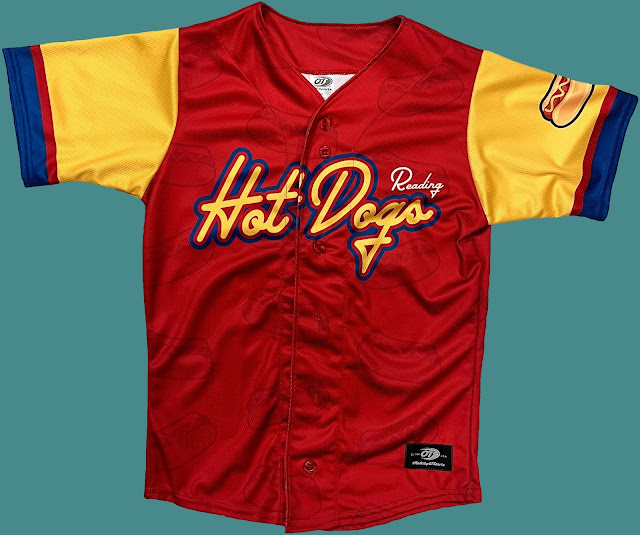 For the past few years, the Reading Fightin Phils have rebranded themselves for a few games every year.  During these games, they've called themselves the Reading Whoopie Pies, the Reading Luchadores and the Reading Pretzels.  Yesterday, the team was called the Reading Hot Dogs, and it wasn't just the name that they used over the loudspeaker.  They had special Hot Dogs uniforms and hats, and a ton of Hot Dogs merchandise available at the team store.
It's hard not to be a little cynical about the whole thing.  In the years since I've started going to Reading Phillies games, it feels less like I'm going to the ballpark to see a game and more like I'm visiting a children's fair where a baseball game happens to be taking place.  I get it - they have to make money, and to do that, they have to be able to attract families with children to the ballpark, not just middle-aged baseball fans like me.  I've been doing my best to be open minded and to just roll with it, but I can't pretend that it's the same minor league ballpark atmosphere that I fell in love with when my dad brought me to West Palm Beach Expos games when I was a kid. 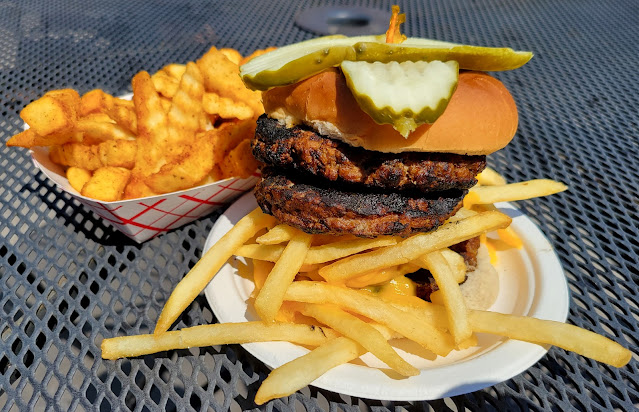 I had the Triple Cheeseburger for dinner last time I was at FirstEnergy Stadium, but there's something even bigger on the menu this year.  The Grandslammer is listed on the menu as having two half-pound burgers with cheese whiz, special sauce and a pickle, but when I ordered it, they gave me what I believe was four quarter-pound burgers, with a bunch of french fries jammed in between. 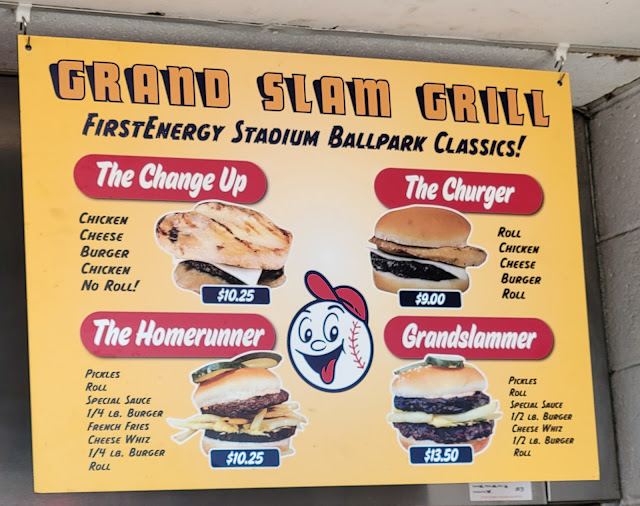 They do have a slightly smaller burger on the menu called The Homerunner, which is made with two quarter-pound burgers and is stuffed with fries.  I'm guessing that they ran out of half-pound hamburger patties, so they told the concession stand crew that when someone ordered a Grandslammer, just make that same thing as the Homerunner but with two extra meat patties, and the added fries were a side-effect of those instructions.  Hey, I'm not complaining - free french fries! 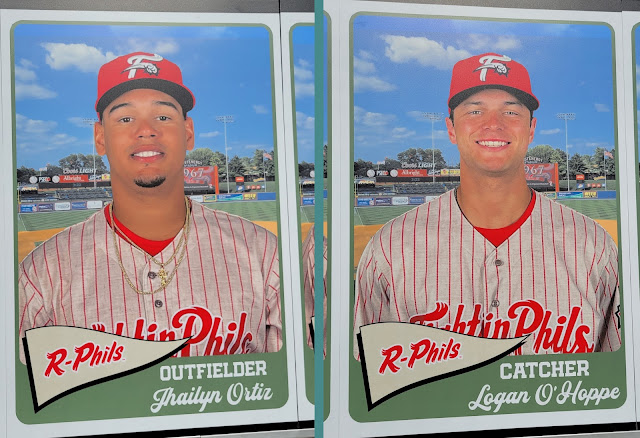 The starting pitcher for the Harrisburg Senators is left hander Evan Lee, who is a Top 20 prospect in the Washington Nationals system.  The Reading... um... Hot Dogs had two players in their starting lineup who are among the Top 20 on the Phillies farm: right fielder Jhailyn Ortiz and catcher Logan O'Hoppe.
Ortiz didn't have a great night, going 0-4 with a walk, but O'Hoppe hit a two run homer in the bottom of the fifth inning, which means that I'm getting some free drinks. 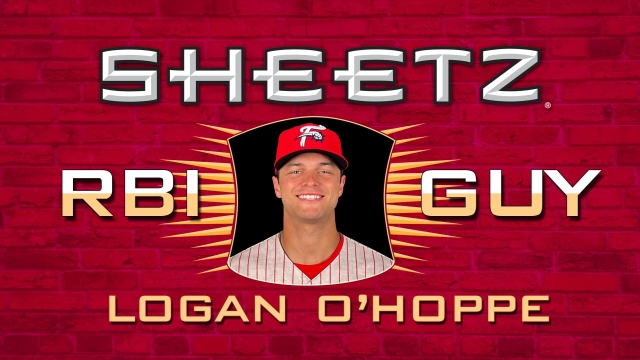 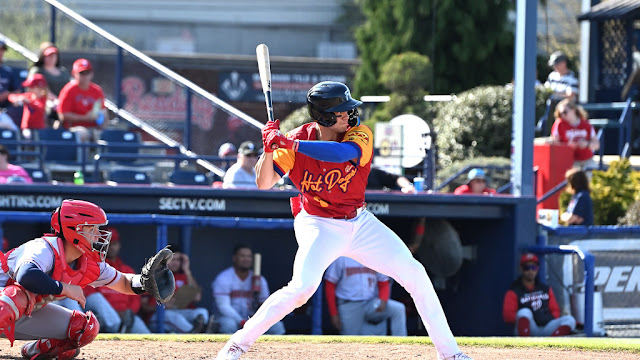 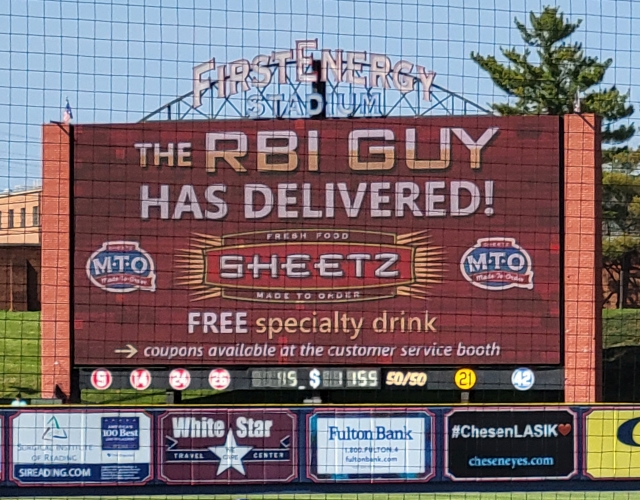 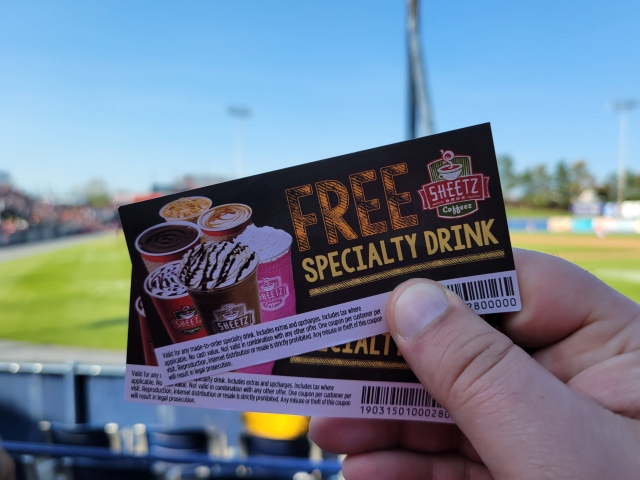 So, because O'Hoppe was picked as the Sheetz RBI Guy for the game, his home run gave everyone in attendance a coupon for a free specialty drink at Sheetz.  Those can run to four or five bucks depending on what you get, so that's not too shabby of a deal!
While we were walking out, Logan O'Hoppe was standing by the door of the clubhouse signing autographs for the kids.  It does my heart good when I see that.  It reminds me of when I was their age and guys like Rondell White and Tavo Alvarez would sign autographs for me and for the other kids at the ballpark when my dad took me to a game.  It made me even happier to see that there weren't any adult autograph hounds pushing and shoving to get something signed. 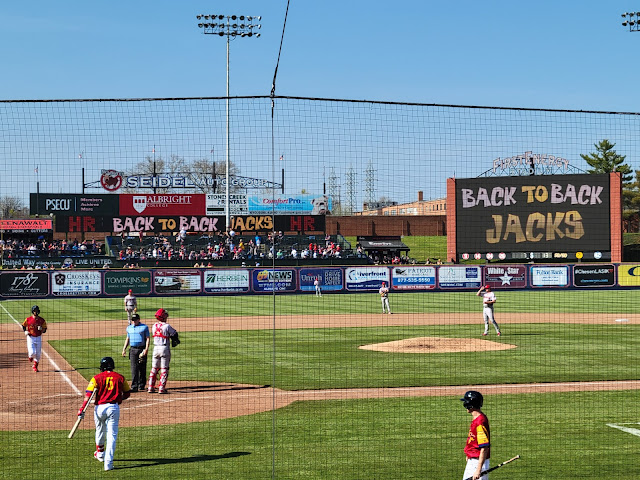 Madison Stokes came up to bat after the O'Hoppe home run, and he followed it up with a solo shot of his own to narrow the Senators lead to 4-3.  It was the only runs they'd score, and Reading would go on to lose to Harrisburg by a score of 5-3.
Stokes was playing center field, and he had a pretty awkward moment earlier in the game.  Senators right fielder Justin Connell hit a three run shot to center field.  Stokes jumped up at the wall, but he was at least three feet off to the right of where the ball went out of the park.  Aside from that, he was actually pretty good in the field, especially when you consider that he's been an infielder for most of his career.

You can't win 'em all, but it was still a beautiful day at the ballpark.  It was a perfect Spring afternoon, 70 degrees and sunny, and we were sitting in the shade for the whole game with a nice cool breeze blowing in from time to time.  You've really got to take a moment to appreciate a day like that.  We only get so many of them.