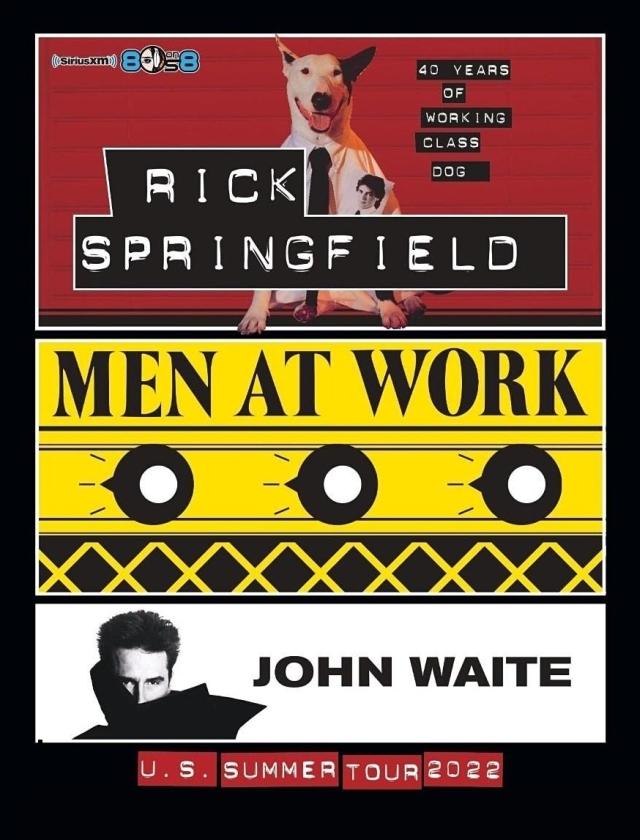 Rick Springfield / Men At Work / John Waite
Forty Years Of Working Class Dog US Summer Tour 2022
Hollywood Casino at Penn National Race Course - Grantville, PA
We saw Rick Springfield in concert for the first time four years ago at the Bloomsburg Fair and we were blown away.  Last night, we had the opportunity to see him again, along with two other artists whose music I grew up listening to: John Waite and Men At Work. 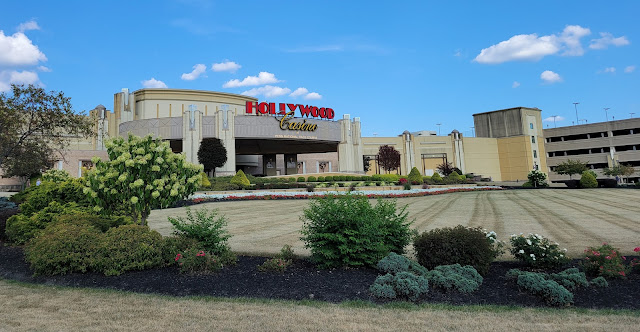 The concert was held at an amphitheater on the grounds of the Hollywood Casino at Penn National Race Course in Grantville, PA.  I've never been to the casino or the venue before, but it turns out that this month marks the 50 years since the Penn National Race Course first opened.  The casino opened in February 2008 after gambling was legalized in Pennsylvania, and the My Heroes stage where this concert was held opened last summer.  The venue reminded me of some of stages at Musikfest in Bethlehem. 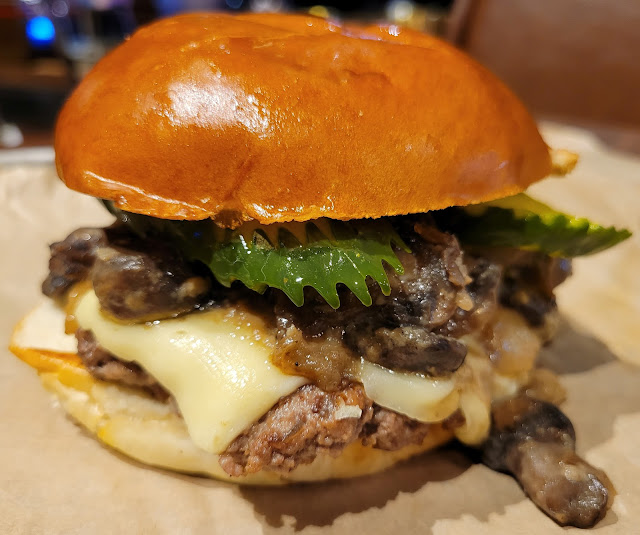 Before the show, we stopped at a restaurant inside the casino called The Classic, which is part of a food court called The Eatery by Fabio Viviani.  Both of us had the Mushroom Burger, which is made from dry aged ground beef from topped with cooper sharp american cheese, garlic mushrooms and buttered onions on a brioche bun.  Very tasty! 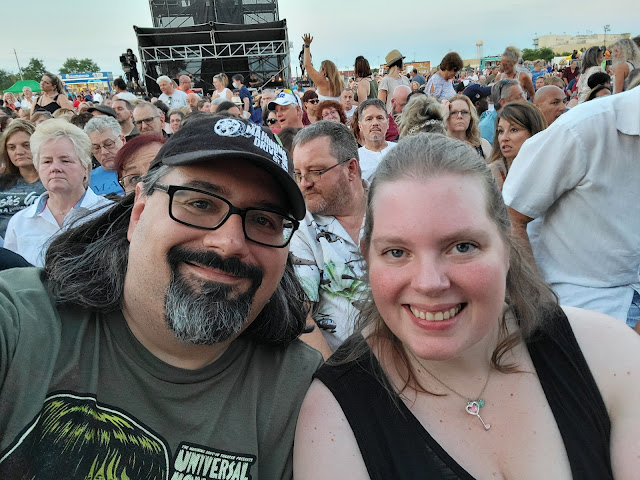 We had pretty good seats for this show in Row M of Section 102 at the dead center of the stage.  There was a small pit at the front of the seating area where fans could stand up against the stage, but those were reserved for folks with much deeper pockets than mine.  The standing area in front of the stage at most venues used to be general admission, and if you got to a show early enough, you'd be able to secure a spot right in the front.  There are still a few places where this is still how it's done, but it seems like more places are starting to section off the pit and charge top dollar for VIP tickets to access it.  It's a trend that I'm not especially happy about, but it is what it is. 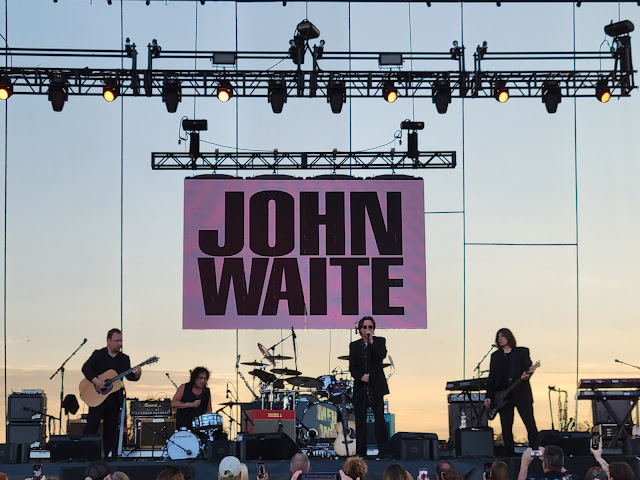 John Waite was the first performer to take the stage.  He was the bassist and lead singer for a band called The Babys in the late 70's and early 80's, but he really hit it big when he went solo in 1982.  His first hit was a song called Change, which was on the Vision Quest soundtrack, but his biggest hit as a solo artist came in 1984 with Missing You.  He was back in a band before the end of the decade as the lead singer of Bad English, who had a hit single called When I See You Smile that went to #1 in 1989.  He has a great voice for adult contemporary ballads, and at 70 years old, the dude has still got it.  He sounded exactly the same as I remembered hearing on the radio throughout my childhood.
He performed a short six song set that included the three hits that I mentioned, in addition to an outstanding song that he recorded in 1997 called Bluebird Cafe.  His setlist closed with an excellent cover of Led Zeppelin's Whole Lotta Love.
I had the greatest of sympathy for the lower back of John Waite's drummer.  The dude was kind of hunkered down at the front of the stage with the smallest and most uncomfortable looking drum kit I have ever seen.  Mr. Waite mentioned this between songs, saying "as you can see, we're on a budget" and he jokingly implored the fans to look into their hearts and visit the merchandise table behind the port-a-pottys to buy a CD. 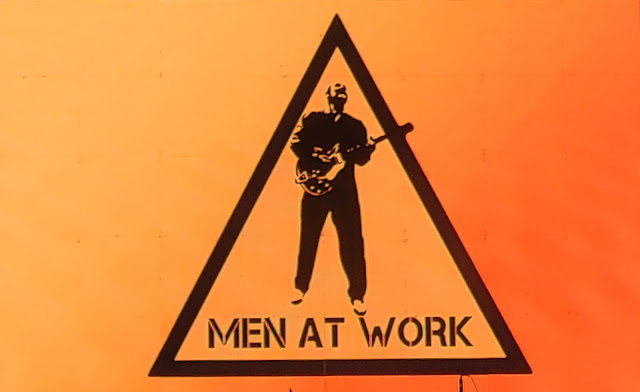 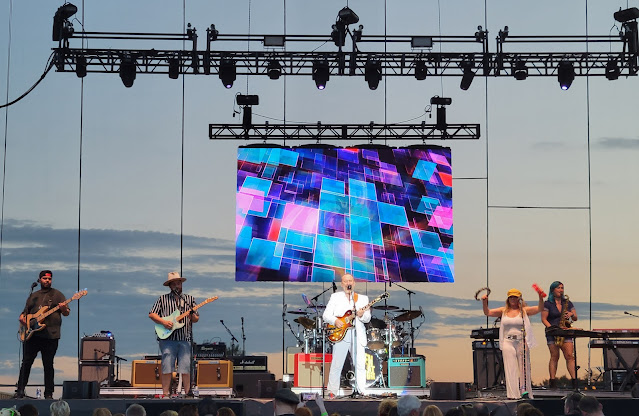 The second performance of the night was the main reason that I bought tickets to this show.  No disrespect whatsoever intended toward John Waite or Rick Springfield, whose music I have loved for many years, but Overkill by Men At Work is one of my favorite songs ever recorded.  It's not the only Men At Work song that I enjoy, but my appreciation for Overkill is on another level.  It's a song about insomnia on the surface, but it captures the feeling of losing control as you move though the different stages of your life.  It's become more meaningful to me as I've gotten older and as I've found myself in times and places where I'm unsure of myself.

Lead singer Colin Hay is the only original member of Men At Work that is still touring with the band, but they sounded the same as the band that I've always known.  In addition to Overkill, they played an 11 song set that included many of the hits that I've grown up listening to, including Dr. Heckyll & Mr. Jive, It's A Mistake, Who Can It Be Now and Down Under before closing their set with Be Good Johnny. 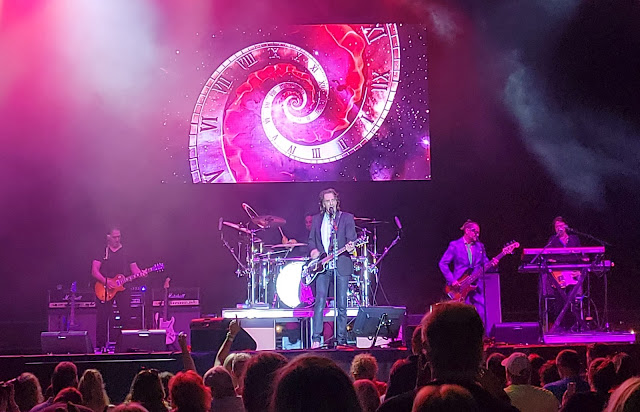 Before I even start talking about Rick Springfield's set, take a look at this photo.  It's taken from Row M and I'm not the world's greatest photographer, but does that man look like he will be celebrating his 73rd birthday on Tuesday?  He looks like he's in his 30's... maybe early 40's at the oldest, but he was born on August 23rd, 1949.  Nineteen forty freakin' nine!  He's 31 years older than me and looks like he could be my younger brother.   It wasn't just the way he looked either... his stage presence dwarfs most of the rock stars who are half his age.  If you don't believe me, go see him in concert.  I guarantee you will walk out of that venue with a new level of respect.  This dude is legit.

Mr. Springfield performed nine full songs and a ten minute medley that included his biggest hits that weren't part of the rest of the setlist, and the dude absolutely rocked every last one of them.  His set finished with his biggest hit and a song that's virtually guaranteed to inspire everyone within earshot to sing along every time it comes on the radio, Jesse's Girl. 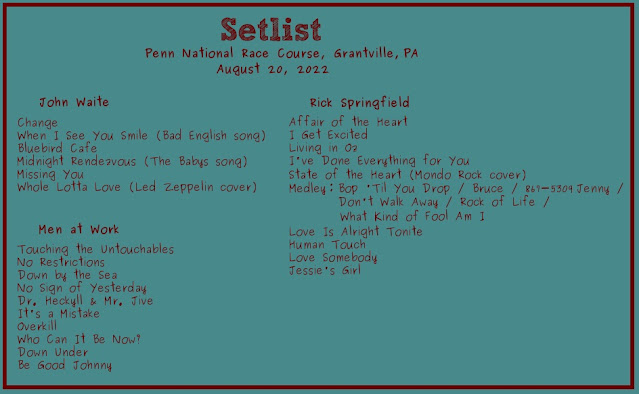 Here are the setlists for John Waite, Men At Work and Rick Springfield (click here to enlarge).