No Consorting With The Suits 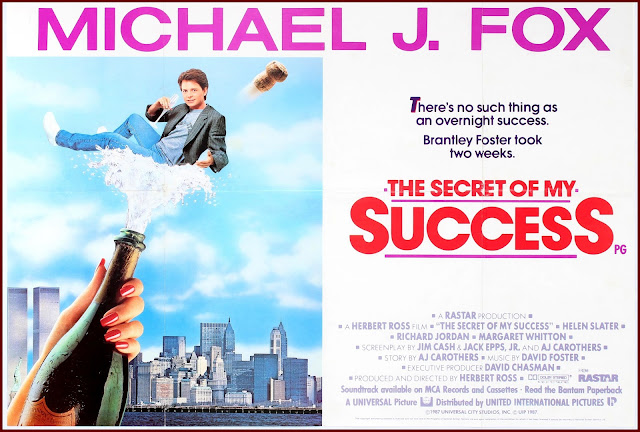 The Secret Of My Success
Universal Pictures (1987)
There were few bigger stars in the world during the mid to late 80's than Michael J. Fox, and there's no better example of this than The Secret Of My Success, which was released to theaters 35 years ago today.
Despite receiving mostly negative reviews from critics, this PG-13 comedy debuted as the #1 film in the box office and stayed there for the next five weeks.  It was the 7th highest grossing film of 1987 with domestic earnings of almost $67 million dollars on a $12 million dollar budget.  To put this in perspective, The Secret Of My Success was a more successful film than Lethal Weapon, Dirty Dancing, Robocop and Predator.

This was the first movie that my wife had ever watched at a drive-in movie theater.  It was a Michael J. Fox double feature of The Secret Of My Success and Back To The Future.  This is why it's become a tradition in our house.  Once a year, we order pizza and watch these two movies back-to-back.  It's usually on the night of her birthday, but sometimes it's a day before or after. 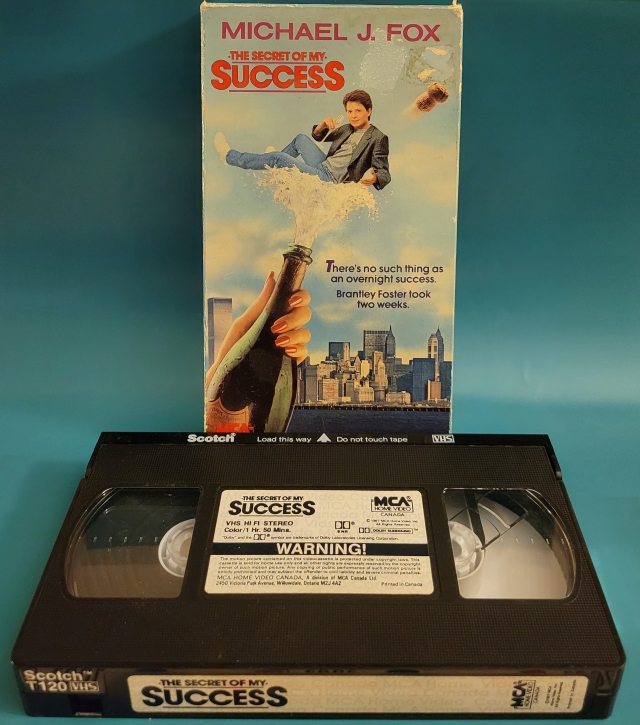 I didn't see this movie when it first came out.  In fact, I was well into my 30's the first time I watched it, but I'm pretty sure I saw this box about a thousand times when I was a kid.  It seemed like every place that rented movies in the late 80's, from the big chains to the mom and pop shops, had a copy of The Secret Of My Success in the comedy section, and that tape sat there for the next 15 years until the stores started to sell off their VHS inventory and switch over entirely to DVD.
We found this tape for sale at the Hometown Farmers Market about ten years ago from an awesome stand that has unfortunately closed a few years ago, and it's become a birthday tradition for my wife in our household ever since.  This one was released by MCA Canada and I believe it was a video rental store copy, but I'm not sure which store it came from. 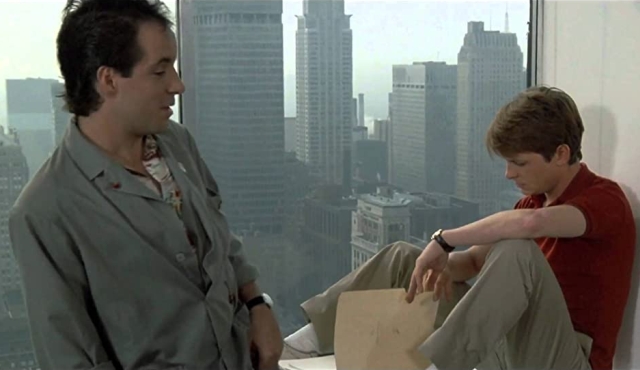 This movie was torn apart by critics when it was released, and its reviews haven't improved over time.  I'll be the first person to tell you that this movie isn't deep or meaningful, and while it has its funny moments, it's not the type of comedy that will have you rolling on the floor in a fit of laughter.  However, it is the absolute epitome of the 1980's.  The Secret Of My Success is about a small town country boy (Michael J. Fox) who graduates college and goes to New York City to make his mark on the world.  The executive job he had lined up falls through, so he takes a job in the mail room of a large, but disorganized company whose CEO is a distant uncle.  He takes advantage of the chaos to create an alter-ego who simultaneously works as an executive in the company while he holds down his job in the mail room.  Throughout all of this, he becomes involved in a sexual affair with the wife of the CEO (Margaret Whitton, who I know best as the team owner from Major League), and a romantic affair with a fellow executive with a Princess Diana hairstyle (Supergirl star Helen Slater), who has been involved in an affair of her own with the CEO. 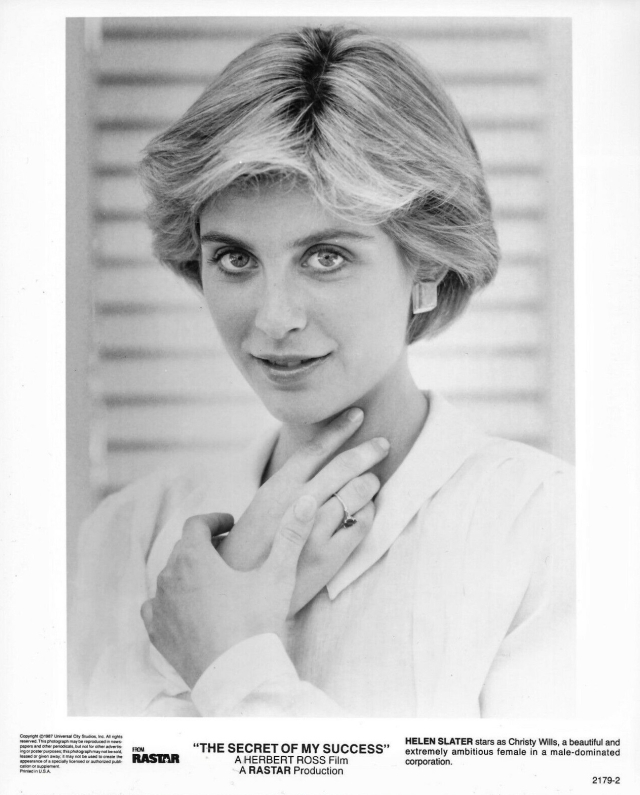 Director Herbert Ross made some interesting choices with his presentation of Helen Slater, which resulted in some of the best unintentionally funny moments I have ever seen.  For example, we are introduced to her character when Michael J. Fox meets her for the first time by a drinking fountain.  This becomes a slow motion close-up of Ms. Slater taking a sip of water, followed by a fantasy scene of her in a dress, and ending with her spinning an extra time through a revolving door as she leaves the building.  All of this is set to smooth 80's jazz with Fox practically drooling on the floor as he stares at her in awe.  Click here to see it for yourself, and keep in mind that this isn't meant to be funny.  It's being played straight as a dramatic scene where the male lead meets his love interest.  This scene is cartoonishly silly and completely unaware of how over-the-top it is being.  You can't help but to laugh at the ridiculousness of it all as it unfolds.
The film's use of music is equally cheesy and enjoyable.  Take this cut of Something I Gotta Do by Restless Heart which plays over a montage of Michael J. Fox when he's trying to decide how he's going to work his way up from the mail room.  Tuck this song away in the back of your mind.  Then, the next time you're faced with an annoying task or situation at work, find a quiet place and sing "It's just something I've got to... doooo... ooooooh... oooooh!" to yourself in an overly dramatic tone.  I guarantee you'll burst out laughing so damn hard that it'll take the sting out of whatever was bothering you.
Look, I'm not going to tell you that The Secret Of My Success is a cinematic masterpiece, but it captures the decade in a way that few other films can match.  It's got plenty of laughs (some intentional, some not), and everyone involved delivers a solid performance for the script that they have to work with.  If you don't take it seriously and you can embrace it for all of the cheesy goodness that it has to offer, you'll have a good time with this flick.