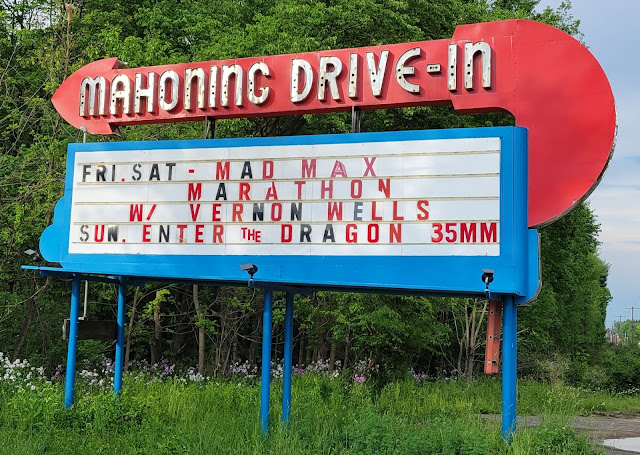 Enter The Dragon
Mahoning Drive-In Theater - Lehighton, PA
I'm not the world's biggest fan of the Mad Max movies.  It's not that I dislike them or anything, but I never seemed to get out of them the same level of enjoyment that most people do.  I thought about going to see them anyway, but we already have tickets to so many other shows this season that I figured it wouldn't be a bad idea to take a Friday and Saturday off - especially since I knew that I'd be back at the drive-in on Sunday for a movie that launched the kung fu genre in the United States: Enter The Dragon. 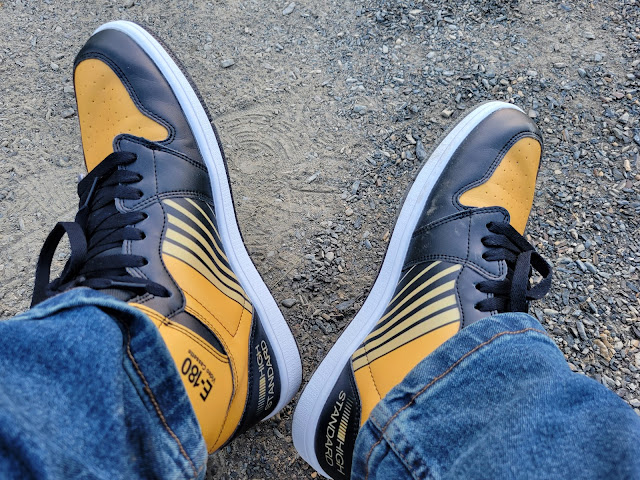 I don't have any kung fu shirts to wear for this event, but I did break out the E-180 VHS Sneakers for the first time.  These were designed by NewRetro.net, and I bought them with the idea to wear them at VHS Fest.  I'm sad to say that I won't be able to make it out to the drive-in for VHS Fest in 2022, so I figured what the hell.  They're yellow, and most of the kung fu flicks that I grew up watching were on VHS, so they're sort of appropriate. 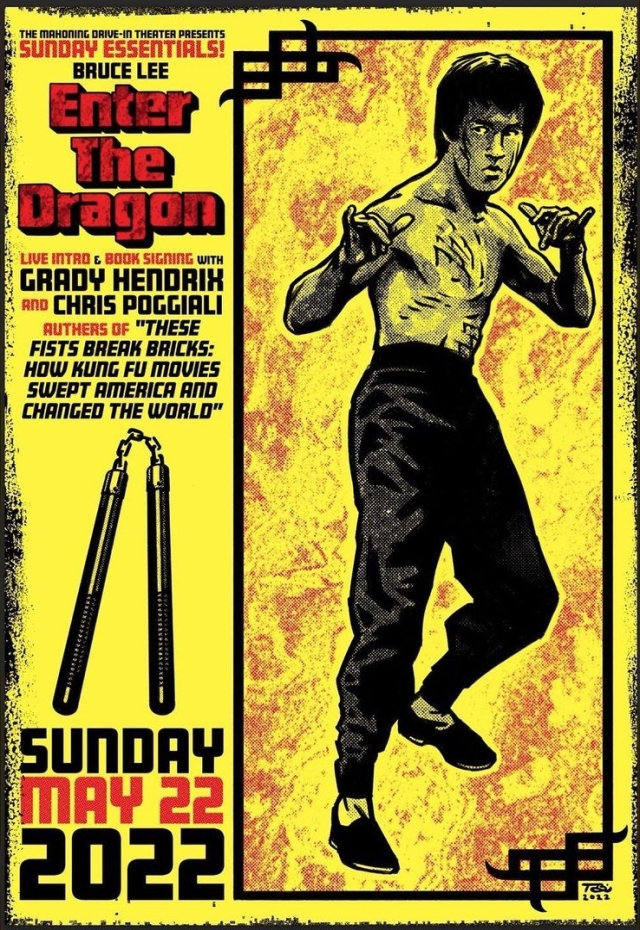 The poster for this show was designed by Tom Bifulco, and it's badass!  It promotes both the screening of the film and the special guests at the Mahoning Drive-In Theater for this show: the authors of These Fists Break Bricks, Grady Hendrix and Chris Poggiali. 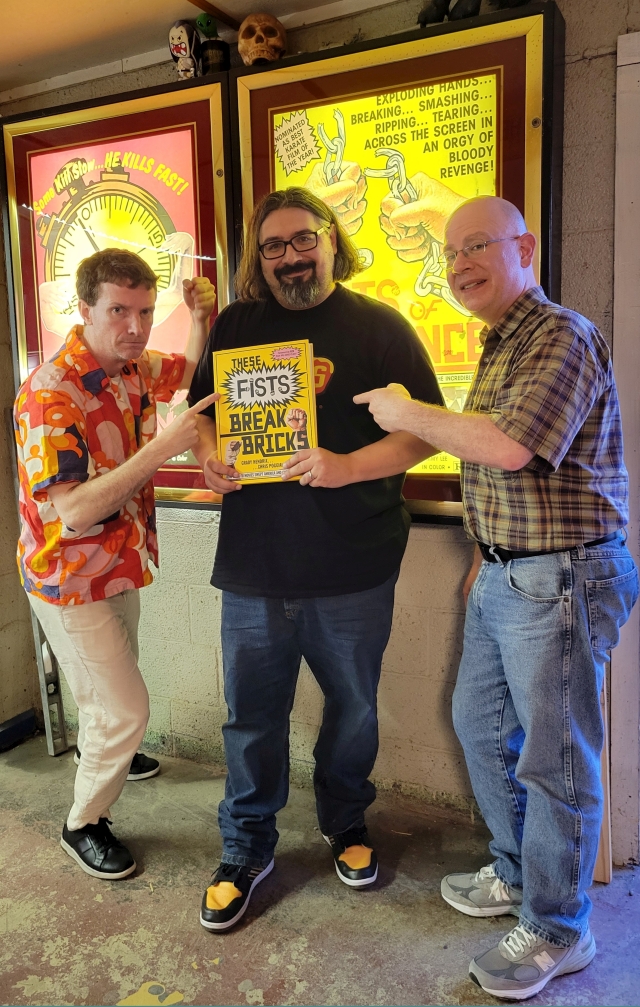 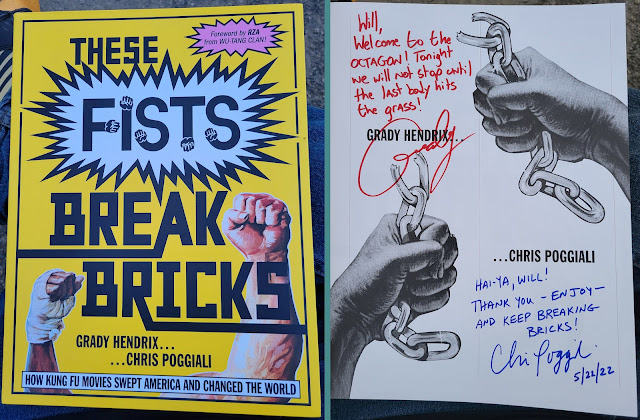 I got to meet Grady and Chris, both of whom are very good dudes.  We talked for a little bit about the movie that made me fall in love with kung fu - a little known flick that I found at a rental store back in the day called Little Mad Guy.  They signed a copy of their book for me which I started reading back at the car, but I didn't get too much further than the forward by RZA of the Wu-Tang Clan.  I'm looking forward to diving into this book this week.
Grady and Chris also did a long introduction on the big screen for Enter The Dragon before the trailer reel and the film.  It wasn't just a short couple of words about the film either - this was a full slideshow presentation that told the history behind the movie, and the after effects that it had on American cinema.  It was incredibly well done and reminded me a lot of Joe Bob's How Rednecks Saved Hollywood. 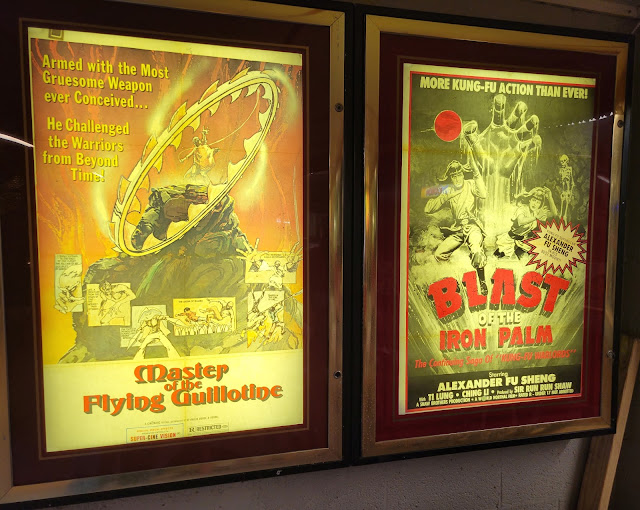 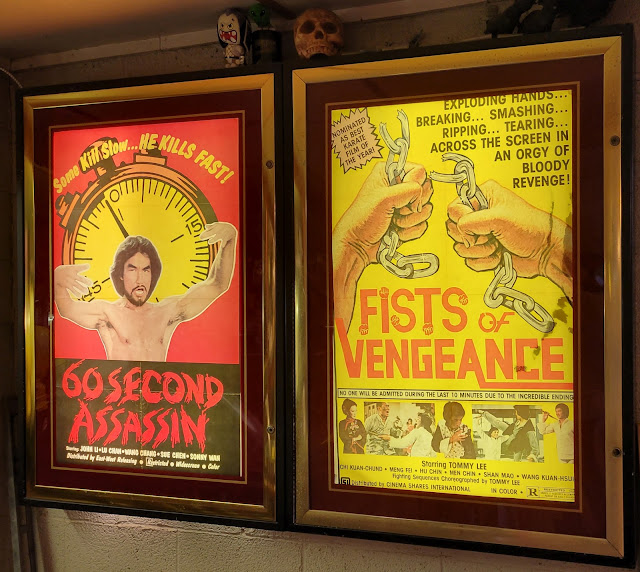 You can see a couple of vintage kung fu movie posters behind Grady Chris, and I in the photo.  Those are for 60 Second Assassin and Fists Of Vengeance.  There were two other posters on the other side of the building: Blast Of The Iron Palm, and one of my favorite kung fu flicks of all time: Master Of The Flying Guillotine.
Between the many different versions of Kung Fu Fighting that were played on Mahoning Radio during the pre-show, Mark mentioned that part of the goal for the single features on Sunday is to gauge ticket sales and determine if it would make sense to do a bigger event centered around a specific type of film.  I'm not sure what the sales were to Enter The Dragon, but I hope it was good because I would definitely be in the front row for a Mahoning kung fu festival! 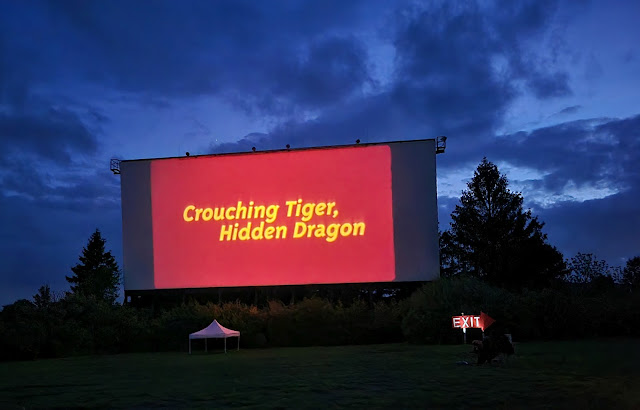 There was a series of trailers shown on the big screen (in glorious 35 mm as always) after the presentation from Grady and Chris.  The first of these is my favorite movie of all time: Crouching Tiger Hidden Dragon.  This came out in theaters when I was 20 years old and I saw it three times: once in Battery Park, once at a random theater somewhere in New Jersey on our drive home from New York, and once at the theater in my hometown after we got home.  It is, in my opinion, the most beautiful movie ever made and I cannot possibly explain how excited I would be to have the opportunity to see it at the Mahoning. 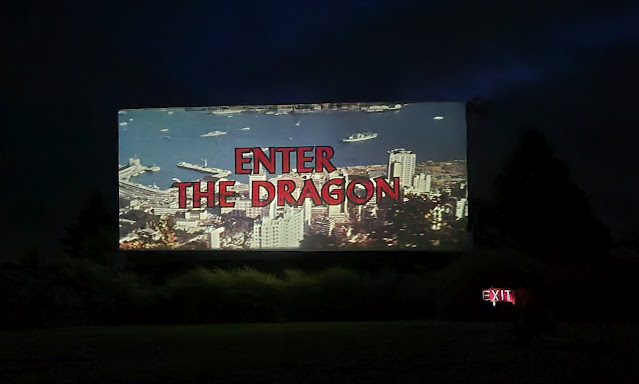 And finally, there was the main event: a screening of the most iconic kung fu flick of all time, and the final film from the master Bruce Lee - Enter The Dragon!  The weather was warm so we got to sit outside all night, and the print was absolutely crisp and beautiful. 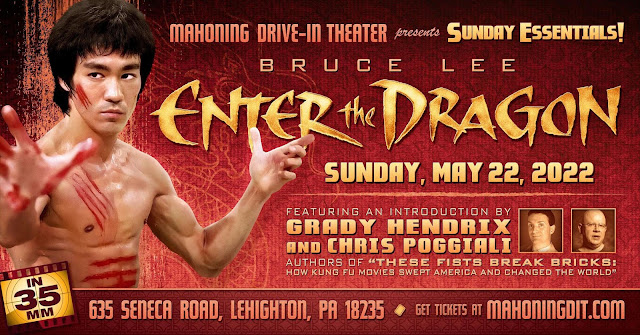 Once again, the Mahoning Drive-In Theater has made another dream of mine come true.  Before I learned about this place, I never imagined that I'd ever have the opportunity to see Enter The Dragon at a drive-in, let alone from a 35 mm print that is being projected by a group of people who love these movies even more than I do.  This place is truly freakin magical!