Joe Bob Is Back In Town 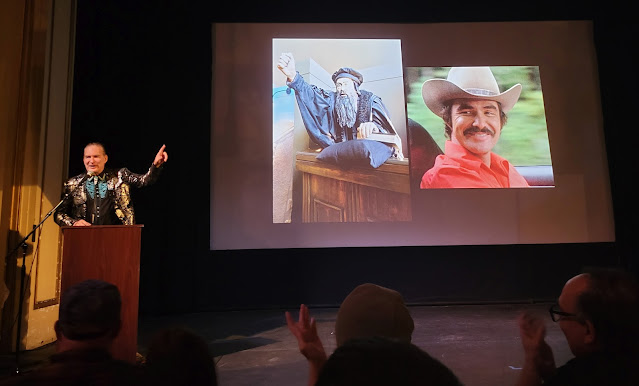 An Evening With Joe Bob Briggs: How Rednecks Saved Hollywood
Colonial Theater - Phoenixville, PA
We saw this show for the first time on day one of Joe Bob's Drive-In Jamboree at the Mahoning Drive-In Theater last year.  It was a great show and my favorite night of the Jamboree, so when it was announced that Mr. Briggs would be coming to the historic Colonial Theater in Phoenixville, I knew that I couldn't miss it.

The Colonial Theater is over a hundred years old.  It opened its doors in 1903 and was a venue for traveling vaudeville acts, musicals, and other stage shows.  It's best remembered today as one of the filming locations for the 1958 Steve McQueen classic, The Blob. 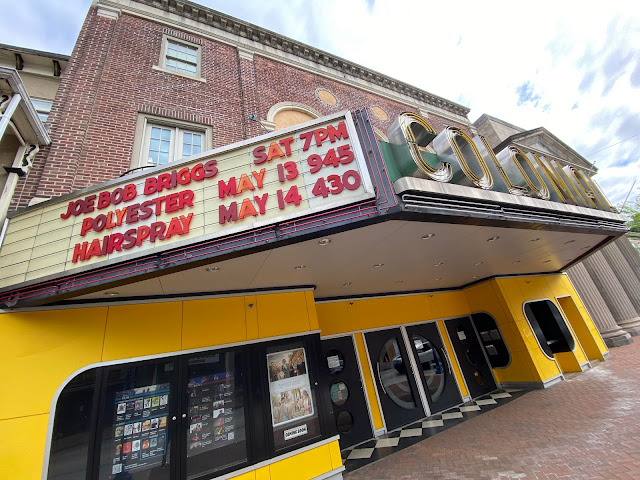 The tickets to the show were general admission, so I wanted to make sure that we got good seats.  Because of this, I didn't get as much time to explore the theater as I would have liked, but what I did see was absolutely beautiful.  The folks at the Colonial screen original 35mm prints of old movies, and they host an annual event called Blobfest, so I'm sure I'll be back at some point in the future. 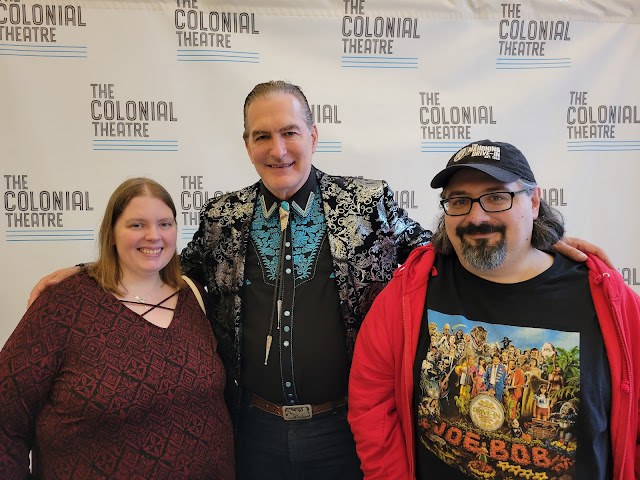 Mr. Briggs had a meet-and-greet set up on the second floor before the start of the show.  We had the opportunity to meet him twice before.  The first time was in 2018 at a small convention in Stanhope, New Jersey.  The second time was last summer at one of my favorite places in the world, the Mahoning Drive-In Theater, during the first night of Joe Bob's Drive-In Jamboree.
He took a nice photo with us on both of those occasions, and I really wish I would have had one of them printed as an 8x10 to bring to the show today so that we could ask him to autograph it.  I didn't think of it until a few hours before we left for the show when it was too late.  Mr. Briggs has already signed a few things for us, but I didn't want to go to an autograph signing without having something to sign. 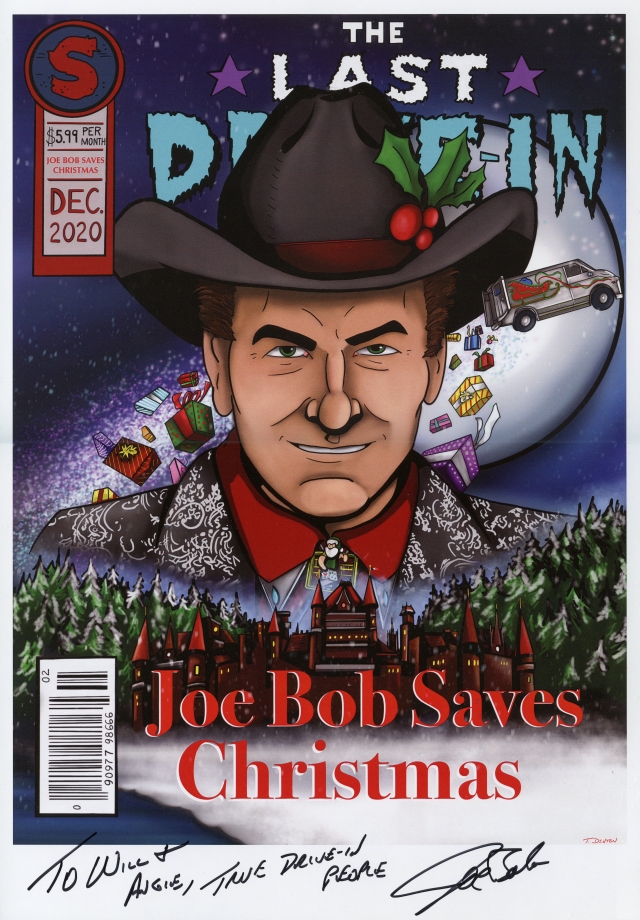 We bought this art print last year from T-Denton, who is the website artist for Mr. Briggs.  I'm going to get a frame for it and hang it up every year with the rest of our Christmas decorations.  You can find Mr. Denton's artwork for sale on DeviantArt and Etsy.  His work is incredible, his prices are extremely fair, and he's a genuinely good dude. 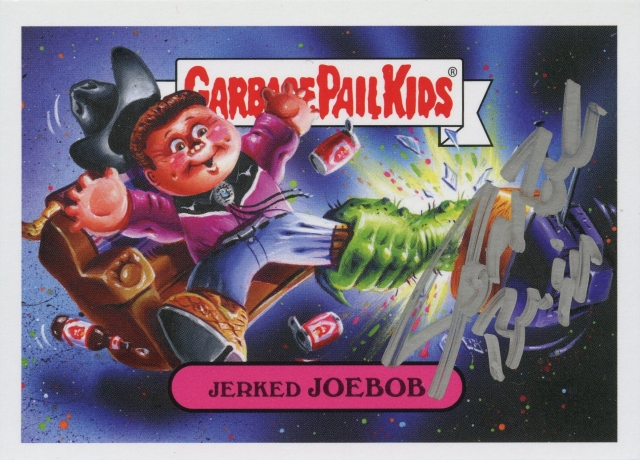 I couldn't resist asking Mr. Briggs to sign one more thing.  There are few things in this world that have brought me happiness for as many years as Garbage Pail Kids.  My first one was given to me by a little girl who I was friends with when I was five years old.  I don't remember her name.  Her parents were friends with my parents, so we played when they came over to visit, but I still have that card to this day (Joltin' Joe from series 1, card 41b).
I don't collect the newer GPK cards that have come out in my adult life, but I couldn't resist picking up the Joe Bob Briggs ones from their 2019 Revenge Of Oh The Horror-ible series.  It's a fun mashup of something that brought me a lot of joy as a kid in the 80's with a man who brought me even more happiness in the 90's and beyond, so having it signed by the man himself is pretty special to me. 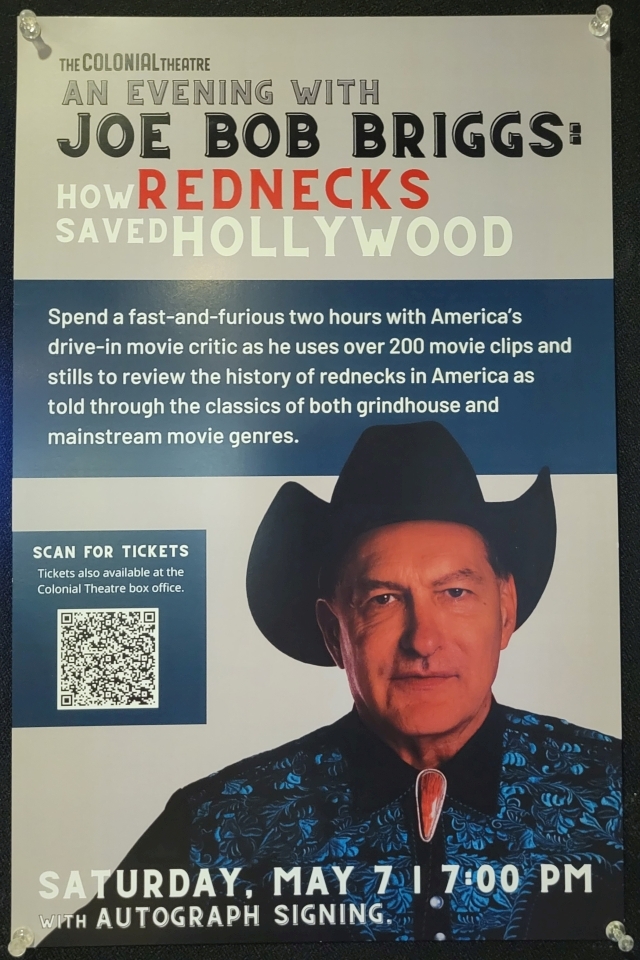 How Rednecks Saved Hollywood is awesome!  Even if you're not as big of a fan of horror movies and The Last Drive-In as we are, I strongly recommend it.  Joe Bob is such a fun and engaging person that I would confidently say that everyone would have a good time at this show.  We've seen it twice now, and I wouldn't hesitate to go back a third time if and when he brings it back to our neck of the woods.  Don't sleep on this if you have an opportunity to see it.  You'll learn.  You'll laugh.  You'll find things to stream that you never thought you'd watch before, and you'll leave with a whole new appreciation for Smokey And The Bandit.