Solitude's Always Better With Somebody Else Around 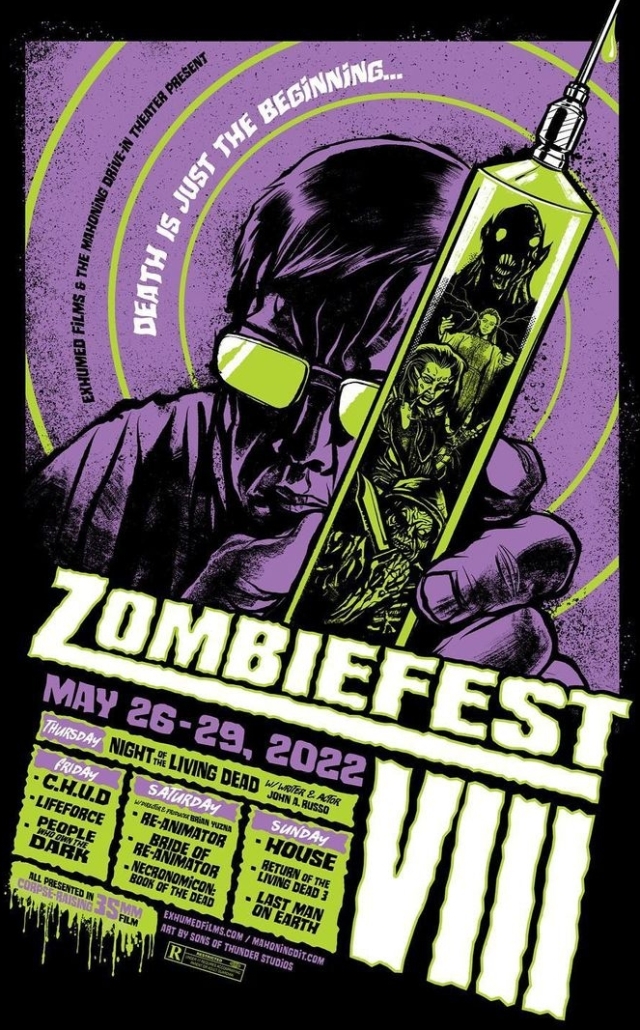 Zombiefest VIII: Night Four
House / Return Of The Living Dead 3 / The Last Man On Earth
Mahoning Drive-In Theater - Lehighton, PA
Before I get into the last night of Zombiefest VIII, it must be said that the poster for this year's event was especially badass.  It was designed by Jason Cortez of Sons Of Thunder Studios, and it combines elements from many of the movies that were shown over the weekend.  Herbert West from Re-Animator is holding out a syringe of his reagent, which has images of a C.H.U.D., a zombie, Julie Walker, and Big Ben. 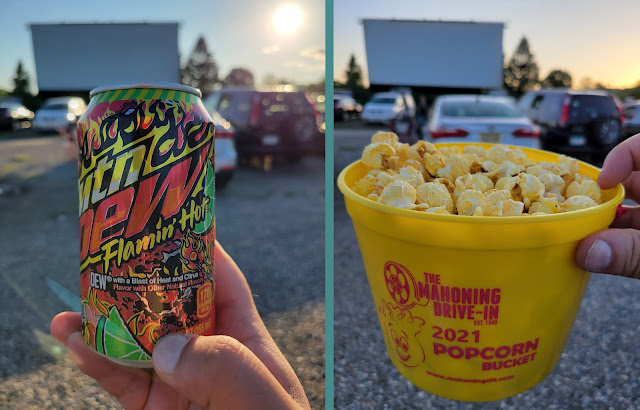 There was no way that I was going to doze off for even a second of this triple feature.  I took a nap at around noon so that I could make it to 3:00 am, and I brought a few cans of Flamin' Hot Mountain Dew to enjoy with my popcorn and stay caffeinated throughout the night.  It has sugar, and I wish I could say that this is the only time I've broken my diet this year.

There was a new pin at Sandy's merch table.  This one is a glow-in-the-dark Mahoning marquee, so I had to pick one up to add to the drive-in backpack. 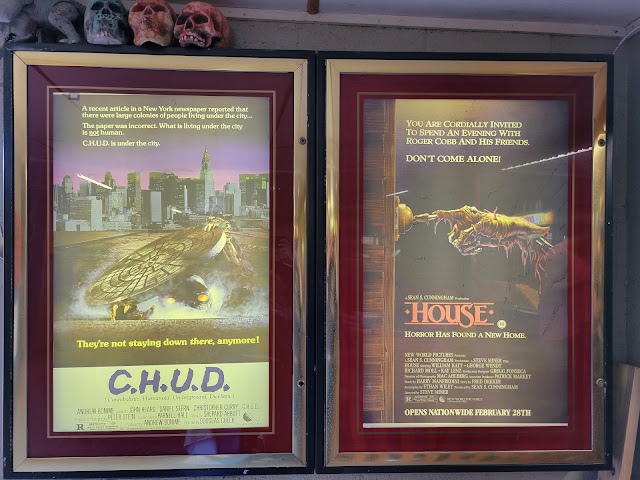 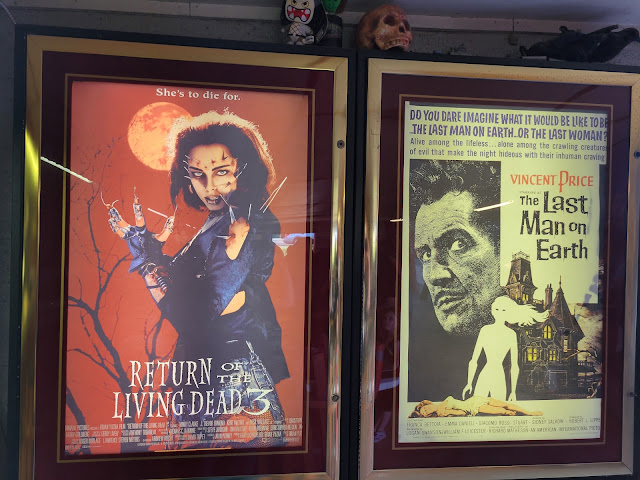 The snack bar had vintage posters for each of the films in Sunday night's triple feature, in addition to C.H.U.D. which was the first film on Friday night. 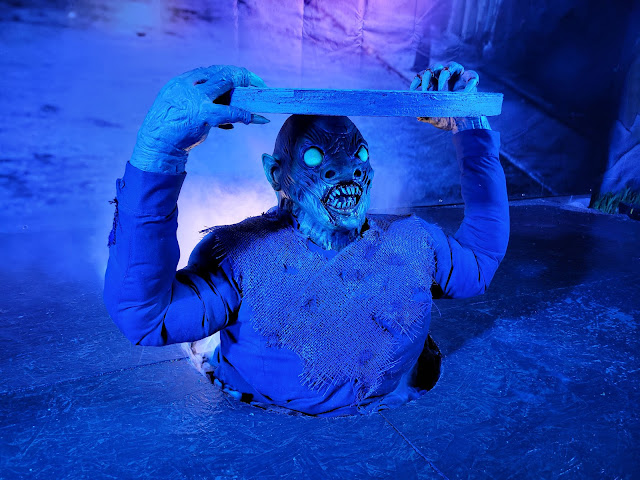 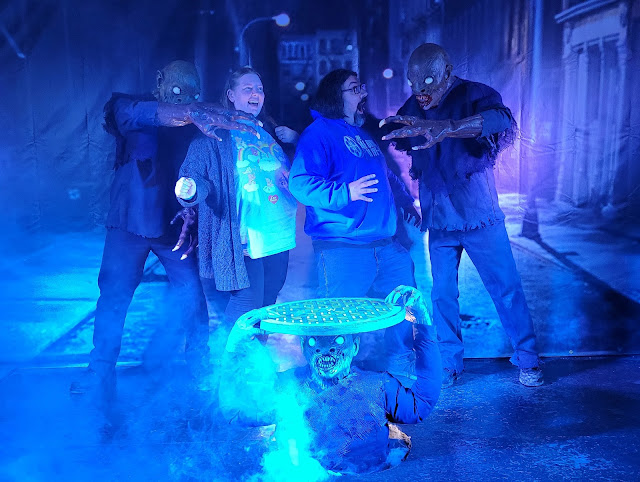 The C.H.U.D. photo op was still up from Friday night too, and I'm very glad that it was.  It was raining the first time I saw this, so the photos I took on Night Two didn't do justice to all of the work that Steve and JT put into this.  In addition to the lighting, there was a fog machine in the ground that made smoke come up out of the manhole cover, as well as two costumed C.H.U.D.s who were on the attack. 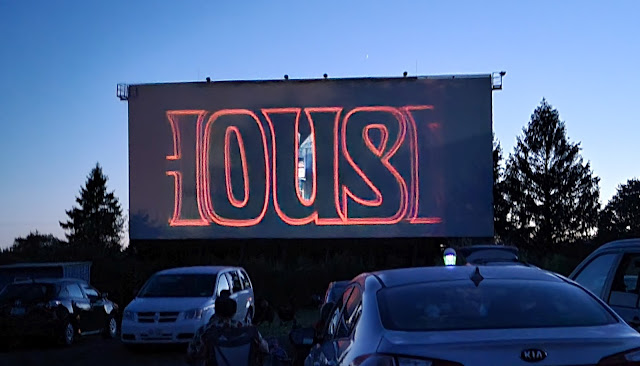 The first movie of Sunday night's triple feature was the 1985 horror comedy, House.  I probably saw the VHS box for this a hundred times when I was a kid before I ever saw the movie itself.  If you've ever been to the horror section of a video rental store in the late 80's or early 90's, you probably saw it too.  It's the one with the closeup on a ghoulish hand with one finger outstretched to press a doorbell with the caption "Ding Dong.  You're Dead" in big white letters at the bottom.
It's got an interesting plot that combines the concept of a war film, a haunted house, and revenge from beyond the grave, all of which are presented as a comedy.  It stars William Katt (Ralph from The Greatest American Hero) as Roger Cobb, a famous horror novelist whose aunt committed suicide in her house, which she believed to be haunted.  The next door neighbor to this house is George Wendt (Norm from Cheers), whose every line and facial expression throughout the movie is hysterical, and Richard Moll (Bull Shannon from Night Court) as Big Ben, who served in Vietnam with Roger and is back from the dead and out to take revenge on his former comrade. 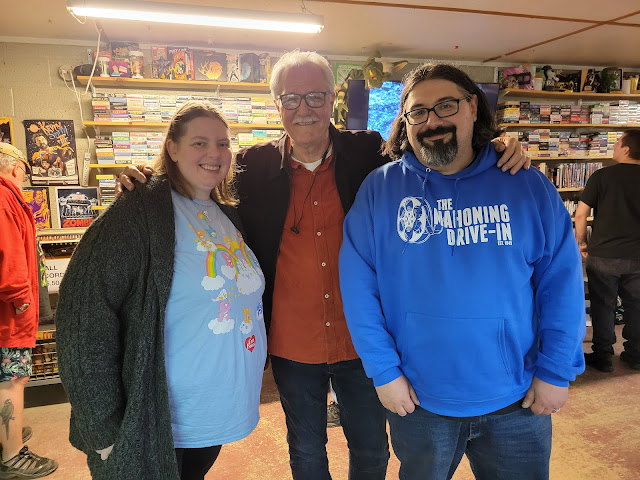 During the first intermission, we got to meet the director of the second movie of Sunday night's triple feature, Mr. Brian Yuzna.  In addition to producing and directing Return Of The Living Dead 3, he's got a list of credits that is a mile long.  He made his directorial debut with Society (1989) and directed over a dozen horror flicks throughout the 90's and 2000's, including Bride Of Re-Animator (1990), Silent Night Deadly Night 4 (1990) and Beyond Re-Animator (2003).  His credits as producer or executive produced are even longer, including From Beyond (1986), Dolls (1987), Warlock (1989), The Guyver (1991), and Silent Night Deadly Night 5 (1992).  He even has writing and production credits on Honey I Shrunk The Kids, which really is kind of a mad scientist sci-fi/horror flick disguised as a family film now that I think about it.
He was an incredibly nice man, and I'm very glad to have met him.  After we took this photo, he turned to me and said "choke me".  I guess he could see a look of confusion wash over my face while I figured out what he meant, so he said "go ahead... your friends will think the other photo is boring".
So... 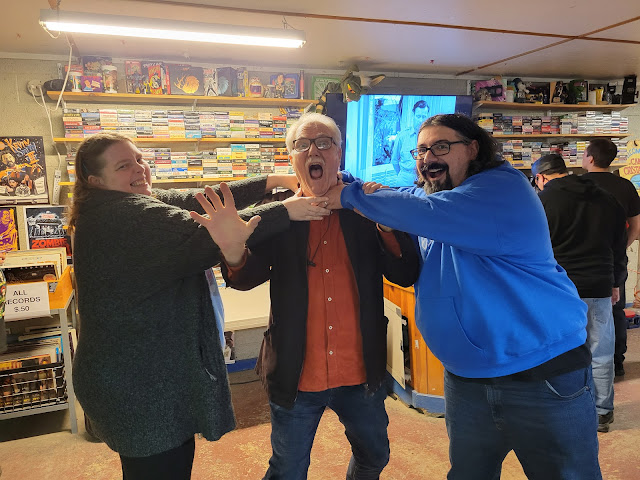 I don't know what's scarier about this photo - the look on Mr. Yuzna's face, or the size of my torso in profile.  I haven't really gained any weight over the past few years, so I'm going to chalk this up in part to the fact that I was wearing multiple layers to stay warm outside after the sun went down. 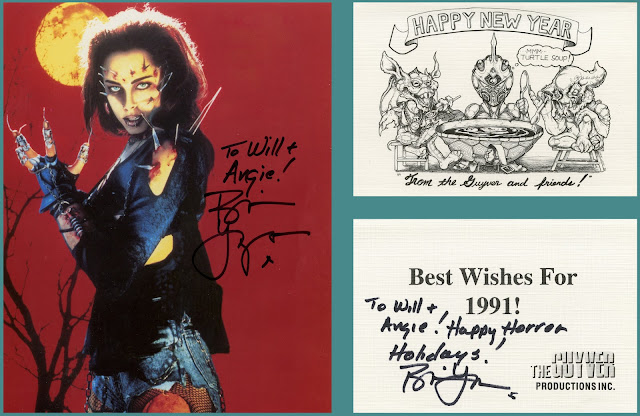 Mr. Yuzna also signed a promo photo from Return Of The Living Dead 3 for us, and he gave us a signed card with original artwork from The Guyver which his production company mailed out for New Years Eve back in 1990.  The movie didn't come out until March 1991, so this card is from before anyone was able to see the movie. 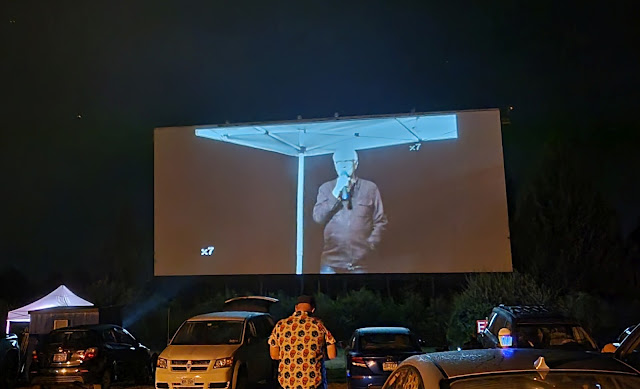 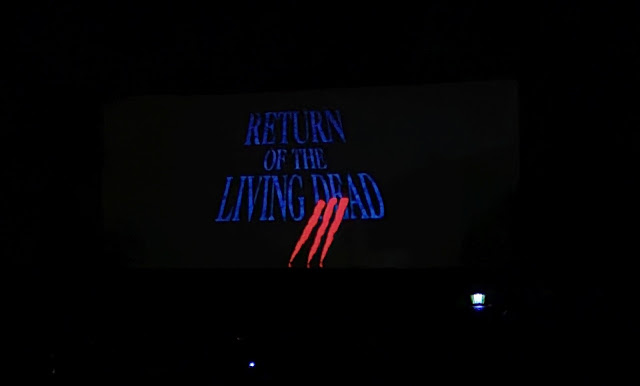 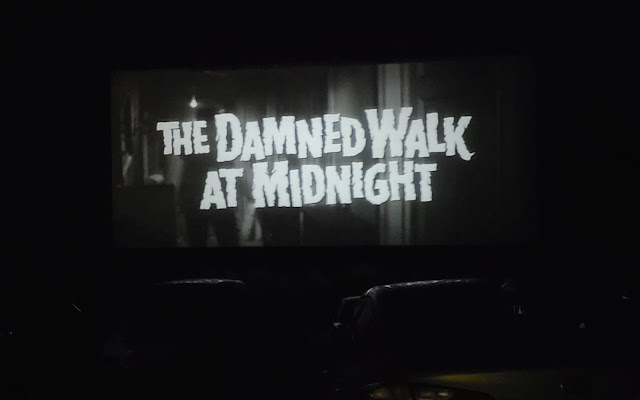 The third and final movie of the night was the 1964 post-apocalyptic classic, The Last Man On Earth.  It was screened from a 35mm print that uses the film's alternate title, The Damned Walk At Midnight.  This is the first movie to be based on the 1954 Richard Matheson novel, I Am Legend, and is truly one of the greatest films of all time.
Black and white movies look especially incredible on the Mahoning screen, and having the opportunity to see Vincent Price in one of the most impactful roles in his illustrious career is truly a privilege.  The fact that we got to see it from our lawn chairs sitting outside on such a beautiful, cloud-free night under a starry sky makes it all the better. 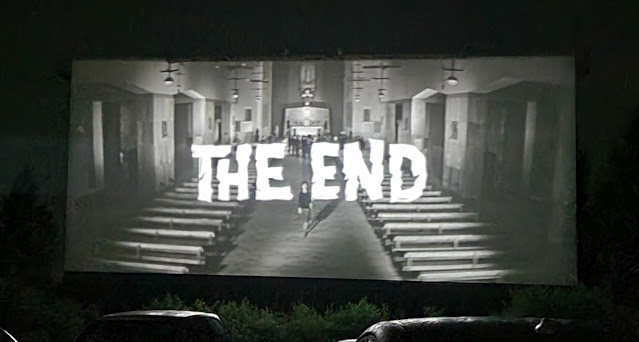 And that's a wrap on Zombiefest VIII.  I missed out on this last year, but as long as I'm able-bodied with a working car and a few dollars in my pocket, I won't miss out on this ever again.  I've said it before, but I truly treasure nights like these.  None of us know how many of them we're going to get.