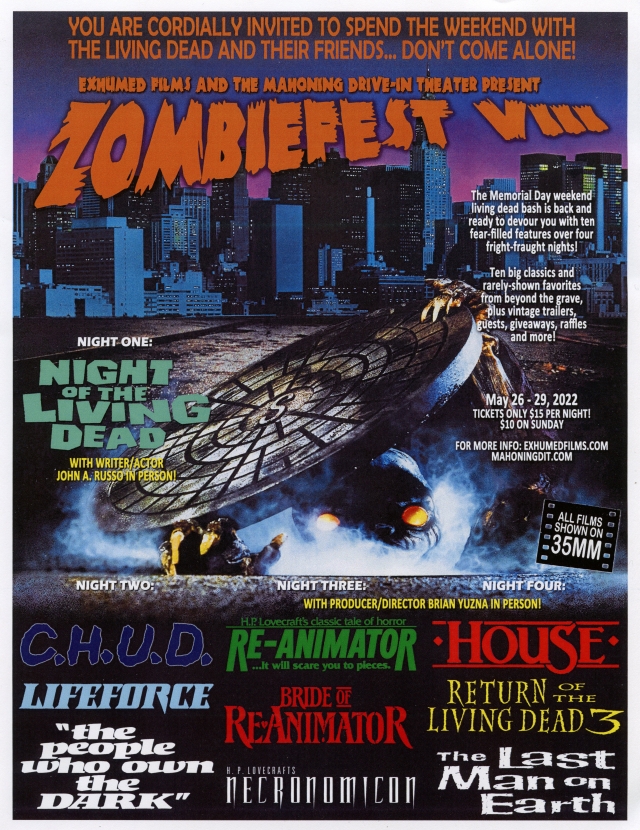 Zombiefest VIII: Night Two
C.H.U.D. / Lifeforce / The People Who Own The Dark
Mahoning Drive-In Theater - Lehighton, PA
When I see the roman numeral behind the name of this event, I am reminded of all of the years that I could have been coming to this place.  Zombiefest VIII?  Is that VIII as in eight?!  I mean, better late than never I guess, but how did I live in Northeast PA and not realize how much awesomeness was taking place on a drive-in lot that's a half hour away from my house? 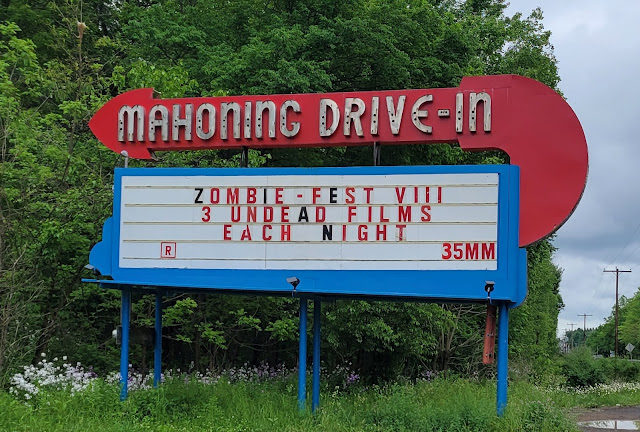 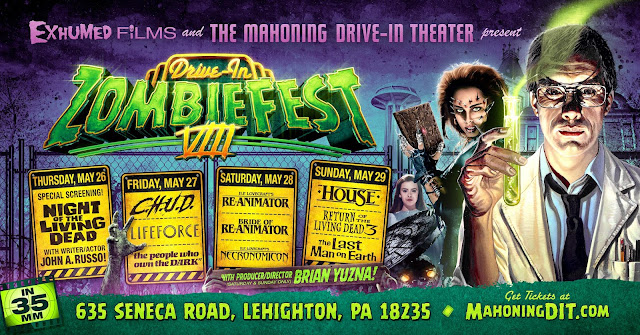 I would have gone to every night of Zombiefest if time and money weren't a factor, but they are so we picked two out of the four nights.  As much as I love the original Night Of The Living Dead and the Re-animator movies, I had to go with Friday and Sunday. 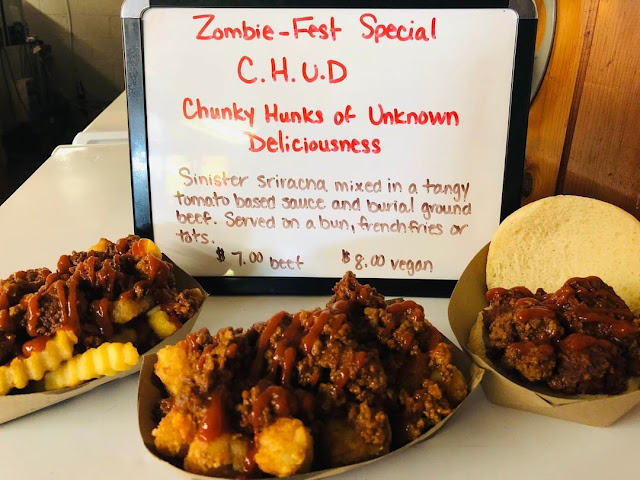 The themed food for this week was Chunky Hunks of Unknown Deliciousness, which is thankfully not really made from mystery meat.  It's ground beef mixed with sriracha in a tomato based sauce - sort of like a chunkier, spicier version of the topping of a Coney Island hot dog.  You could get it served on top of french fries or tater tots, or in a bun. 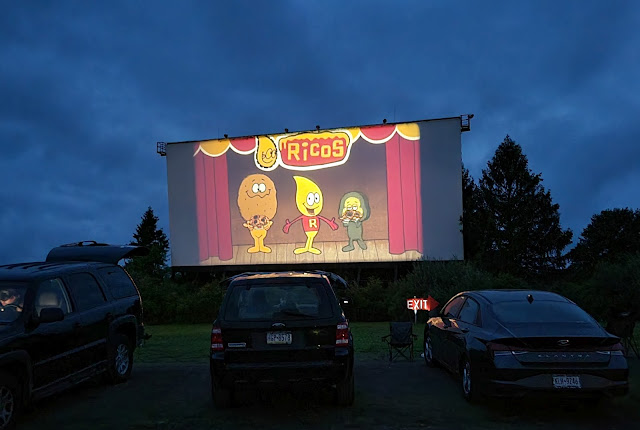 Speaking of concessions, this was the first show that I've been to in 2022 where the Rico's Nachos bump was shown before the movie.  If you're a frequent guest of the Mahoning Drive-In Theater, no explanation is needed, but if you've never been there before, click here for a bit of background on the unofficial mascot of the Mahoning. 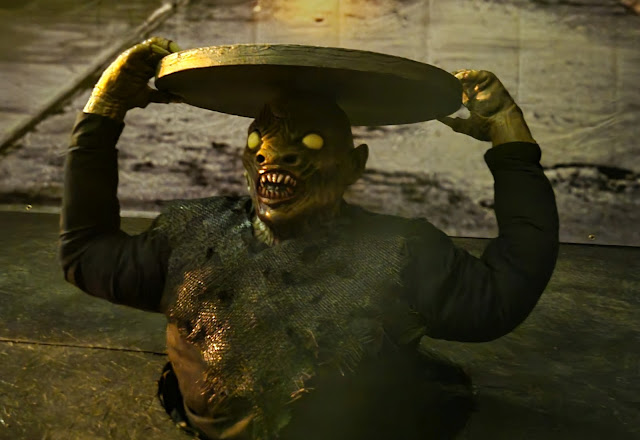 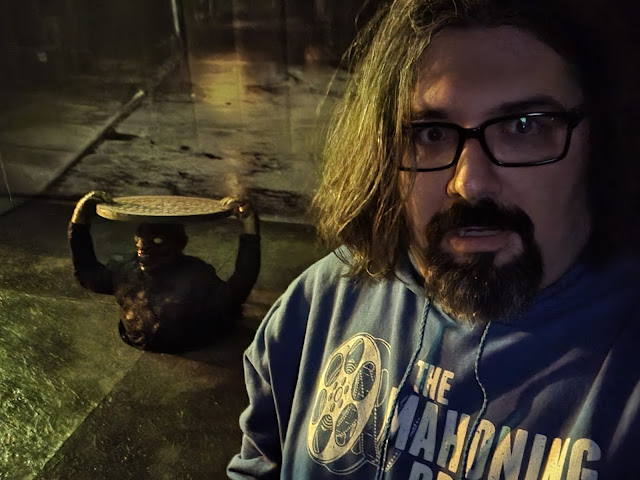 There was a pretty awesome photo op set up outside of the concession building.  There was also a couple of folks dressed up as C.H.U.D.s to take photos with, but it was raining off and on throughout the night and it was pretty empty by the time I made my way over here for the first intermission.  So, this is me trying to look scared on the streets of New York City with a C.H.U.D. popping up from a manhole behind me. 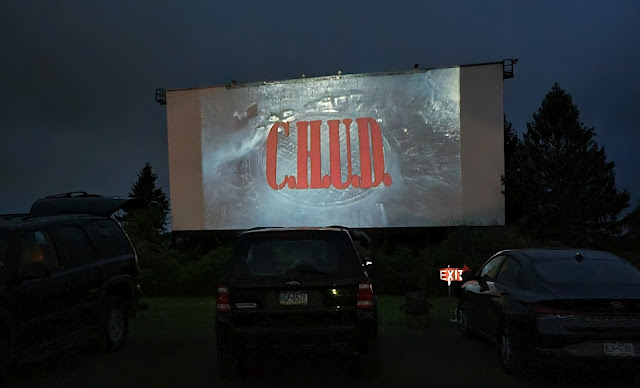 The first movie of the night and the main reason that I was looking forward to Night Two of Zombiefest, was C.H.U.D.  It's a 1984 horror flick about mutants who live under the streets of New York City and rise up from the sewers.  The mutants are called C.H.U.D.s, which stands for Cannibalistic Humanoid Underground Dwellers, but we later learn that the abbreviation also stands for the secret Contamination Hazard Urban Disposal project which led to toxic waste being stored under the city which caused these mutants to exist in the first place - picture if the Morlocks from The Time Machine had the Teenage Mutant Ninja Turtles origin story.
C.H.U.D. stars John Heard as a photographer named George Cooper who has been working on a project to document the lives of the city's homeless, and Daniel Stern as "Reverend" AJ Shepherd, who runs a soup kitchen and has found that many of his regulars have gone missing.  These two actors would go on to work together six years later in Home Alone with Heard as homeowner Peter McCallister and Stern as the robber, Marv.  In a bit of accidental foreshadowing, there is a scene about 35 minutes into C.H.U.D. in which Reverend Shepherd breaks into George Cooper's home.  Fortunately for Stern, there are no boobytraps set up this time, so he and Captain Bosh (played by Christopher Curry) just borrow a few photos and leave.
This is a movie that tends to get saddled with the label of "so bad it's good".  I love films like that, but I think that this distinction gives this movie its due credit.  While it is definitely a low budget b-movie with more than a few cheesy lines that become unintentional comedy, it also has an entertaining plot, a few very good performances (particularly Stern) and special effects that are pretty decent for the mid 80's considering its budget.  C.H.U.D. certainly wasn't snubbed for any Oscars, but it's a pretty damn good movie. 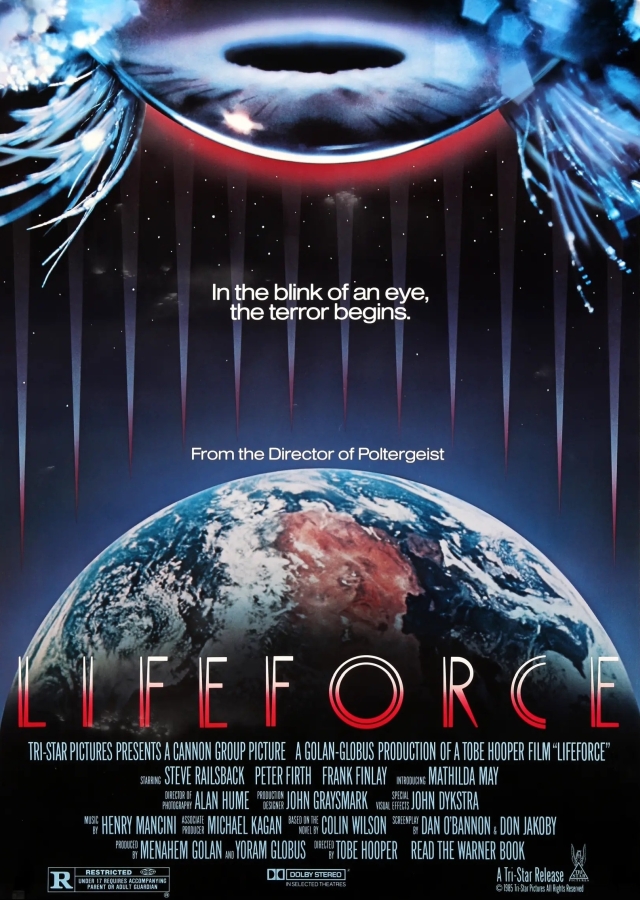 The second movie of the night was a 1985 sci-fi horror flick called Lifeforce.  It's the seventh film from Tobe Hooper, who directed both The Texas Chainsaw Massacre and Poltergeist.  I know that I watched this once before when I worked at Blowout Video when I was a teenager, but I didn't remember too much about it other than the fact that actress Mathilda May plays a space vampire who is naked for pretty much her entire role.
I wish I could say more about the film, but I'm embarrassed to say that I was in and out of consciousness from about a half hour into the film to the end credits.  It's not that I didn't find the movie interesting.  I woke up at 5:30 in the morning for work on Friday, and Lifeforce didn't start until about 11 pm.  If we were sitting outside, I probably would have made it all the way through the second movie without dozing off, but the rain started up about 20 minutes before the end of C.H.U.D. so we had to go back in the car.  The combination of being awake for 18 hours and sitting in a cozy, warm car with pillows and blankets was just too much to overcome.  Thankfully, I had some energy drinks in the car that helped me to power through and stay up for the third movie in Friday night's triple feature. 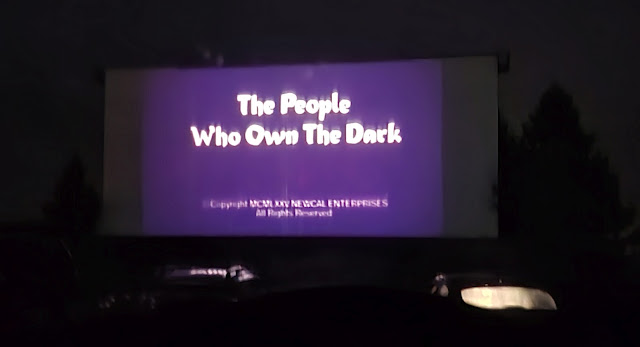 The People Who Own The Dark is a Spanish post-apocalyptic film from 1976 that was directed by León Klimovsky.  The film begins with a woman who is organizing a dinner party/orgy in a castle on the Spanish countryside with a number of female sex workers.  They are soon joined by their wealthy male clients, which includes the assistant to a Soviet ambassador who is unexpectedly called back to his country and who allows the assistant to attend the party in his place.  A nuclear war breaks out before the festivities can begin.  The bombing spares both the castle and the people inside, but the survivors in a nearby town have all gone blind as a result of the blast.  In a panic, one of the wealthy men from the castle fires a gun into a crowd of the blinded survivors, and the rest of the film sees them getting picked off one at a time as they try to survive in a radioactive environment and make their way past the townspeople to try to get to safety.
This isn't really a horror or a zombie movie, but it definitely fits the tone of both genres.  I had never seen it before Friday night.. well, technically Saturday morning since it didn't get started until about 1:00 am.  Prior to seeing it, I heard that it was compared to Night Of The Living Dead by quite a few people, and I can understand why, but it reminded me of The Day Of The Triffids, with elements of Rabid and The Day After, the latter two of which came in the years after The People Who Own The Dark.
Overall, I thought it was a good movie with a thought-provoking story, but it did leave a little something to be desired when it comes to character development.  It's the kind of film that is just begging to be remade in a way that dedicates more attention to the townspeople's side of the conflict, and that makes you care a bit more about some of characters, who were pretty much all treated like red shirts in an episode of Star Trek.  I'd still recommend it, but maybe not to everyone.

The rain stopped about halfway through the final film of the night, but it left behind an eerie fog.  It wasn't enough to obstruct the screen, but if you looked toward the projection booth, you could see the movie being reflected by the fog.  It looked awesome, like the movie as bleeding into the night sky.
So far, the forecast is saying that we're in for a warm night with clear skies for the final night of Zombiefest.  I'll be taking an afternoon nap and loading up on caffeine to stay up for the triple feature of House, Return Of The Living Dead 3 and The Last Man On Earth tonight.