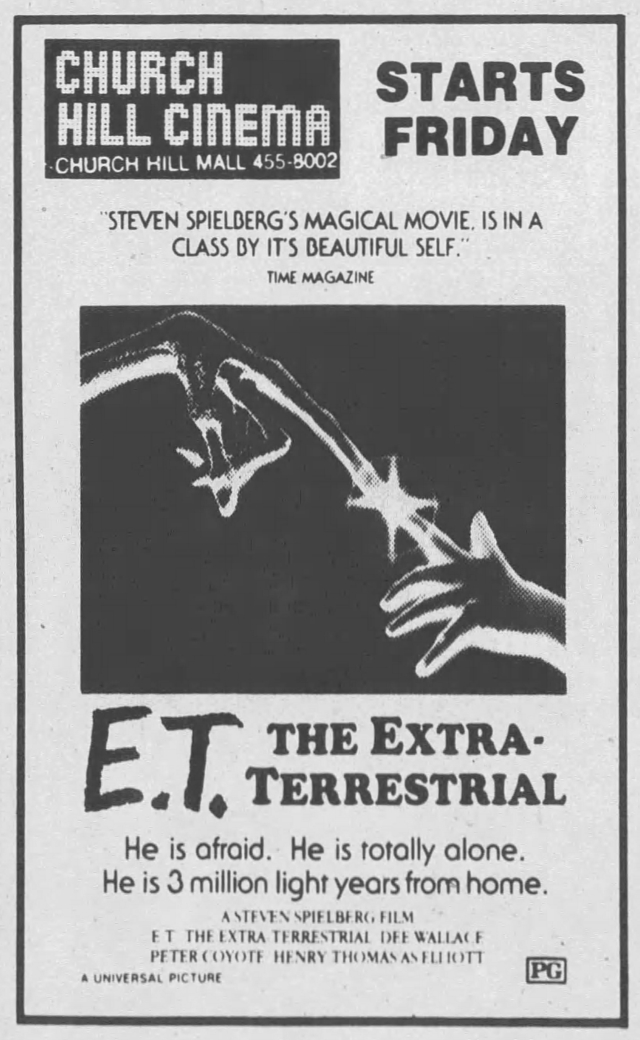 E.T. The Extra-Terrestrial
Universal Pictures (1982)
One of the most beautiful stories ever told in the history of motion pictures premiered in theaters across the United States forty years ago today.

While I was researching this post, I was shocked to find that this Steven Spielberg classic was nowhere to be found in my hometown of Hazleton, PA on the date that it was released.  This is despite the fact that Hazleton had two indoor cinemas and two drive-in theaters in town at the time.  Even the movie theater at the nearby Schuylkill Mall wasn't showing it on opening day.
The newspaper clipping at the top of this post which advertised E.T. starting on Friday at the Church Hill Cinema was published in the Standard Speaker newspaper on June 24, 1982, which means that the highest grossing film of the year wasn't screened in my hometown until twelve days after it premiered.  Folks in my hometown were instead treated to additional screenings of Rocky III and Star Trek II: The Wrath Of Khan at the traditional theaters, while the drive-ins were showing Porky's, Cannonball Run, Animal House and The Blues Brothers.  These are all great films in their own right, but it's hard to believe in retrospect that they were held over to block the screening of a film that is still ranked as the 7th highest grossing film of all time (when adjusted for inflation).

Moviegoers in the Hazleton area who wanted to see E.T. in its first two weeks in theaters would have had to drive about a half hour north to the Wyoming Valley Mall in Wilkes-Barre if they wanted to find the closest theater that was showing it on opening night. 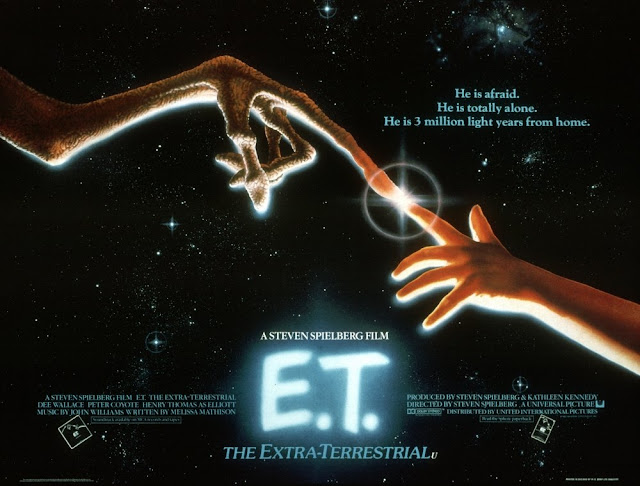 I can't imagine that there are too many people who haven't seen this movie, but even if you have, today would be an excellent day to give it a second watch.  It's about as close to perfection as a movie can get, with a brilliantly written and performed story that truly lives up to all of its 80's hype.
Watching this as an adult gave me a whole new appreciation for the character of Mary (Elliott's mother), played by Dee Wallace.  Ms. Wallace's performance perfectly captures that of a woman who has recently become a single mother to three children (one in high school, one in early middle school, and one who has just started school).  Her character is filled with love for her children, but also undergoing a massive amount of stress and doing her best to hold things together, taking it one day at a time.  The trio of Henry Thomas (Elliott), Robert MacNaughton (Michael, Elliott's older brother) and Drew Barrymore (Gertie, Elliott's younger sister) are hands down the best and most realistic performances I have ever seen from any child actors.  They not only act their characters ages in a way that is more authentic than just about any other performance I have ever seen, but they play off each other as siblings in a way that is second to none.
E.T. has never gotten a sequel, and that is something for which I am extremely thankful.  This is a perfect movie exactly as it is.  It needs no sequels, no prequels, no remakes, and no reboots.  It needs only to be experienced and shared for the true work of brilliance that it is.