Baja Gold
Mountain Dew (2022)
There have been a lot of products from the past that have been so successful that they have branched out and become their own brand.  Take Cheerios for example.  When Cheerios first came out, there was one flavor - Cheerios.  For over 35 years, that was all there was.  In 1979, General Mills released Honey Nut Cheerios.  Then, about ten years later, they came out with Apple Cinnamon Cheerios.  Fast forward to 2022 and I can't even tell you how many different kinds of Cheerios there are.

Mountain Dew is another one of these brands.  When I was growing up, the only flavor was Mountain Dew.  It wasn't bad, but it wasn't my favorite. It was my third choice behind Sprite and 7 Up when I was in the mood for a citrus based soda.  In 2004, they came out with Mountain Dew Baja Blast as an flavor that was exclusively available at Taco Bell.  It was pretty good - a lot better than regular Mountain Dew with a strong lime flavor.
These days the Baja line has extended to include all sorts of different tropical fruit flavors.  I recently had the opportunity to try the pineapple one, which is called Baja Gold.  It tastes pretty much like every other pineapple soda I've ever had - not great, but not bad either.  The real story, though, is this groovy little guy on the label. 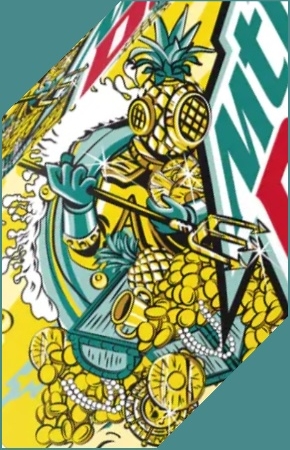 I've seen a lot of horror movies in my life, but there haven't been too many things that could match a monster with a pineapple diving helmet for a head who's surrounded by gold and jewels and pointing a trident at you.  This dude is too good to be limited to the label off of a Mountain Dew side project.  At the very least, he should have his own comic book.