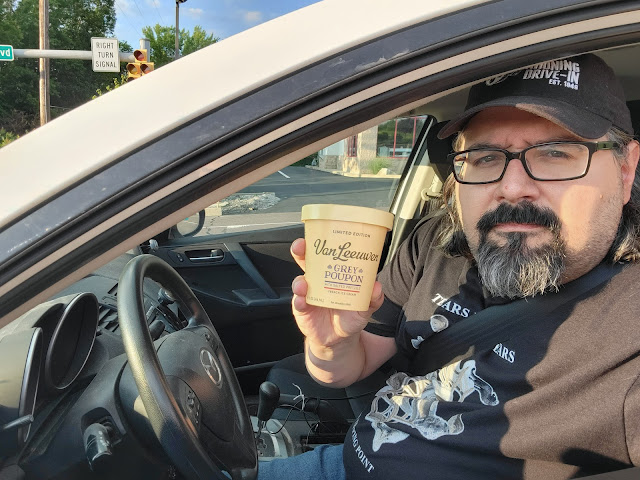 Grey Poupon Ice Cream
Van Leeuwen (2022)
One of the most well-known commercials throughout the 80's and early 90's was for a little glass jar of mustard.  It became a meme before anyone had ever heard the word meme.  Hell, it was a meme before most people had even heard of the internet.

The first of these Grey Poupon commercials aired in 1981, with different versions of it coming out in the years that followed.  The beginning and end vary slightly, but they all include a wealthy person in a fancy car pulling up next to another luxury automobile before rolling down their window to ask "Pardon me, do you have any Grey Poupon?".  The person in the other car always responds "but of course" before handing over a jar of the condiment, although in the later commercials, they drove away leaving their polite requester mustardless.

The commercial has been parodied countless times, with the most well-known example occurring in the 1992 comedy film Wayne's World.  The fact that the ad was still being referenced over a decade after it first aired speaks to the success that a 30 second mustard commercial had in establishing itself as a part of pop culture.  When I see this scene 30 years later, I wonder if younger audiences get the joke.
I would probably have thought you were joking if you told me back in the 80's that I'd eat a pint of Grey Poupon mustard flavored ice cream one day, but here we are. 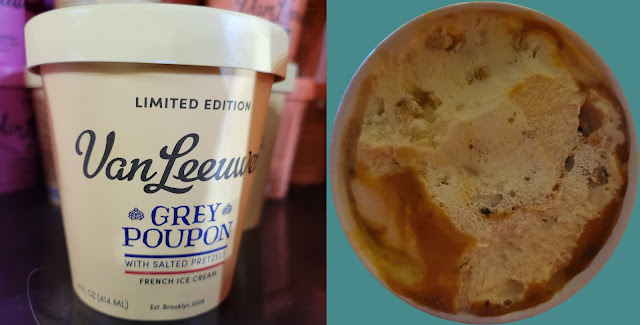 Earlier this year, I wrote about some other Van Leeuwen ice cream flavors that I had tried, including Pizza and Kraft Macaroni & Cheese.  It seems that their business model is to create flavors that inspire those who try them to say "it's not as disgusting as you think".  If that is the case, they have once again succeeded.
The base of this product is a sweet ice cream (basically vanilla without the vanilla flavoring), with the sauce and the inclusions carrying most of the flavor.  It's got a sweet honey mustard variegate swirled throughout with chunks of salted soft pretzel pieces mixed in.  I don't think I'd buy it a second time, but it's not bad and I'm glad that I got to try it.  I also respect the fact that this company is willing to invest the time and money to put this flavor in stores, rather than to create something bizarre and make it available only to "influencers" and contest winners.  God only knows what these folks will come up with next, but as long as it's in stores and it's being sold for a reasonable price, I'll probably give it a try.