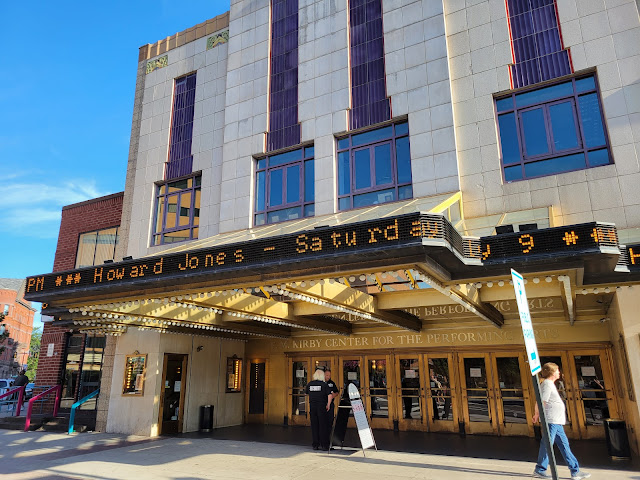 Howard Jones
The Dialogue Tour
FM Kirby Center - Wilkes-Barre, PA
Almost nothing about this show was what I expected it was going to be.  It began with a disappointment, which was followed by a series of pleasant surprises that added up to a night of incredible music and a one of a kind performance from a true professional. 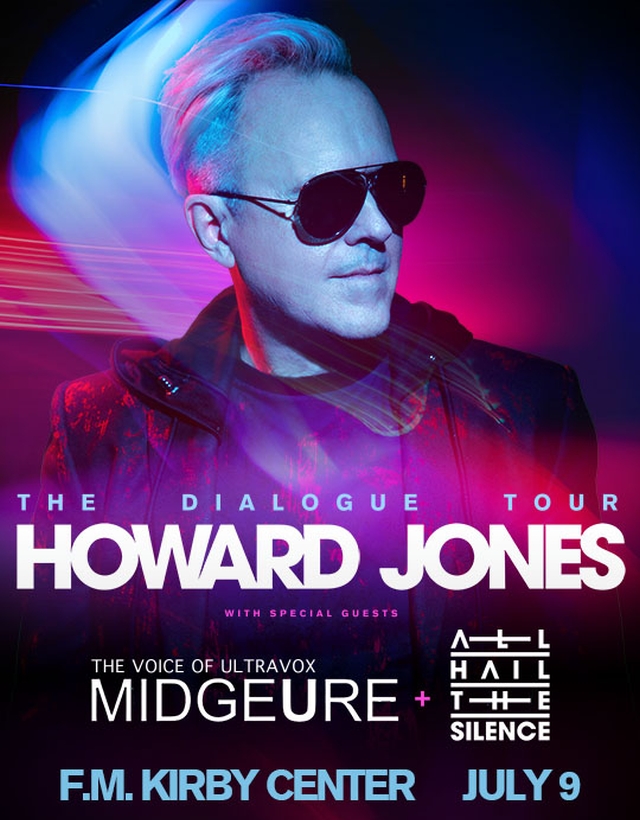 This show was advertised as having two opening acts.  The first is a two man group called All Hail The Silence.  Their keyboardist, BT, worked with Howard Jones on some of the songs from his Transform album.  We saw them open for Howard Jones three years ago at a show in Jim Thorpe and I thought they were great, so I was looking forward to this opportunity to see them again.
I was even more excited to see Midge Ure.  He was the lead singer of Ultravox, which is one of my favorite new wave bands, and he also played guitar and synthesizers for Visage, who recorded one of my all time favorite new wave songs, Fade To Grey.  He was also the co-writer and co-producer of the a song that will be played every December for as long as Christmas music exists on this planet: Do They Know It's Christmas by Band-Aid.  Midge also played keyboards on the song and was one of the many singers who took part in the recording.  In addition to all of that, Midge Ure is also the co-founder of the Live Aid and Live 8 concerts with Bob Geldof.  In other words, he's a pretty damn massive part of some of the most influential songs and moments in music and pop culture of my lifetime, and his catalog of work includes many of my all time favorite songs, including Fade To Grey, Vienna, Reap The Wild Wind, and Dancing With Tears In My Eyes.  As much as I love Howard Jones, I was even more looking forward to seeing Midge Ure in concert for the first time.
Unfortunately, we did not get to see All Hail The Silence or Midge Ure perform at the Kirby Center last night.  There was no mention of what happened with All Hail The Silence, but Howard Jones came out at 8:00 to let us know that Midge Ure had contracted Covid-19 and would not be performing.  I haven't heard anything about how Midge is doing.  I know that he performed in Buffalo on July 7th, so his diagnosis must have come sometime in the 48 hours prior to the show in Wilkes-Barre.  I hope that he's doing well and that he beats the virus quickly and gets back to feeling healthy again.
So, that was the bad news... 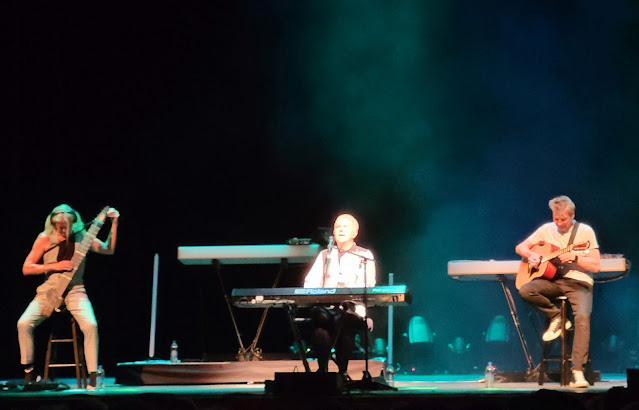 The good news was that Howard Jones decided to give us a unique experience on this tour by performing as his own opening act.  Before the main set, he performed a beautiful six song acoustic set alongside Kajagoogoo bassist Nick Beggs and guitarist Robin Boult.  The three have an acoustic tour planned for the UK this October after the Dialogue Tour has ended, so we got to experience a small taste of the next tour as an opening act for the current tour.
Howard Jones is a wonderful human being.  He didn't have to do this, and I truly hope the other fans who were in attendance recognized that.  I'm confident that most other artists in the same position would have just gone ahead and performed their set without an opening act, or they might try to recruit a local band to play a few songs and fill some time.  However, at the last minute, he put together a very nice opening set and pulled double duty to give the fans in attendance something special.  My respect and admiration for Mr. Jones was already pretty darn high, but I'll be damned if he didn't exceed my expectations yet again.

We got another piece of good news prior to Howard Jones performing as his own opening act.  Our tickets were for Row J in the left balcony.  With all of the shows we're going to this summer, we had to try to be smart with money, and these were the most affordable seats that were available when tickets for this show went on sale.  We only sat up there for a couple of minutes before anyone had taken the stage when an usher from the Kirby Center asked us if we would like to move down to the lower level for free.  Of course, we jumped at the opportunity, and as a result, we had center aisle seats in front of the stage in Row N. 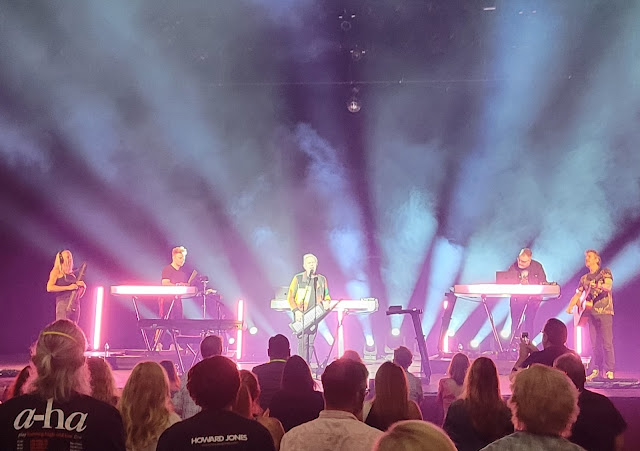 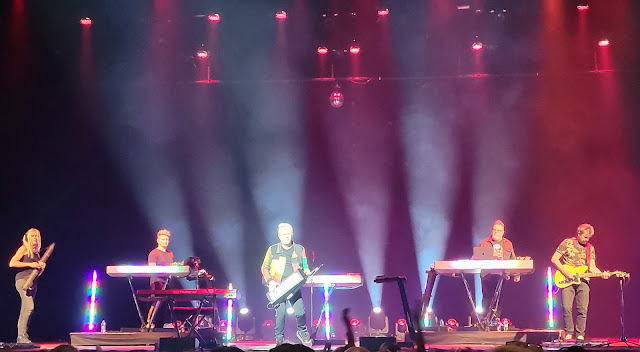 This was our third time seeing Howard Jones, and the man does not disappoint one little bit.  Both sets that he performed last night were fantastic!  The opening acoustic set included songs that I've never heard him perform live before, and a few deeper cuts that I've never heard at all.  They opened with Assault And Battery off of his 1985 platinum album Dream Into Action.  Next came Don't Always Look At The Rain from his 1984 debut album Human's Lib, followed by a song that appeared on the UK release of Dream Into Action called Specialty.  The next song was one that he co-wrote with Jane Wiedlin of The Go Go's.  It's called Tomorrow Is Now, which was recorded for his 1998 album People.  The next song was my favorite of the acoustic set.  He wrote it with Duncan Sheik, and the two performed it together on Perform.00.  It also appears on the 2009 album Ordinary Heroes.  The song is called Someone You Need, and it really deserves to be a much bigger hit because it's a beautiful song.  Finally, they closed the opening acoustic set with the opening track from his third studio album, One To One.  It's a song called You Know I Love You... Don't You, and I don't think I've ever heard it before last night.
Again, I can't stress enough how incredibly cool it was for Howard Jones to come out and be his own opening act.  It shows a genuine love of performing and a respect for the audience.  It's a bummer to have missed out on seeing Midge Ure, but Mr. Jones went out of his way to make this night special.
After the acoustic set, they headed back and the stage was set up for the main set that he was scheduled to perform last night.  The main set began with a trio of songs off of the Human's Lib album: Pearl In The Shell, Hunt The Self, and Equality.  Between the two sets, Howard Jones performed more than half of the tracks off of the iconic album, which was very awesome!
There was another very pleasant surprise halfway through the main set.  Howard Jones introduced his bassist, Nick Beggs, to the audience.  That's him on the far left playing the Chapman Stick.  He was the bass guitarist and one of the founders of Kajagoogoo.  They teased the crowd for a bit before they performed Beggs' 1983 hit single, Too Shy, with Jones on keyboard and vocals and Robin Boult on guitar.
The main set also included Jones' biggest hits: Like To Get To Know You Well, Life In One Day, New Song, Everlasting Love, What Is Love, Things Can Only Get Better, and my personal favorite, No One Is To Blame.  They also played Hero In Your Eyes and The One To Love You from the 2019 Transform album, as well as The Human Touch from the 2015 CD/DVD release Engage, and songs off of his most recent album, Dialogue, which was released just a week ago.  The new songs were Celebrate It Together and Who You Really Want To Be.  There was another song that I didn't recognize that they played after New Song, but before The Human Touch.  I think it may have been a track off of Dialogue, but his body of work is so massive that it could have been an older song that I'm not familiar with.
Overall, it was an unforgettable show.  It's our third time seeing Howard Jones, and I hope it isn't the last. 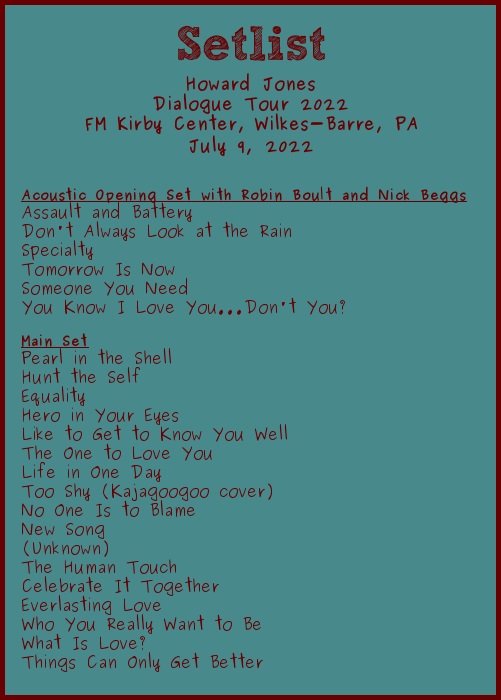