You Are Receiving This Broadcast As A Dream 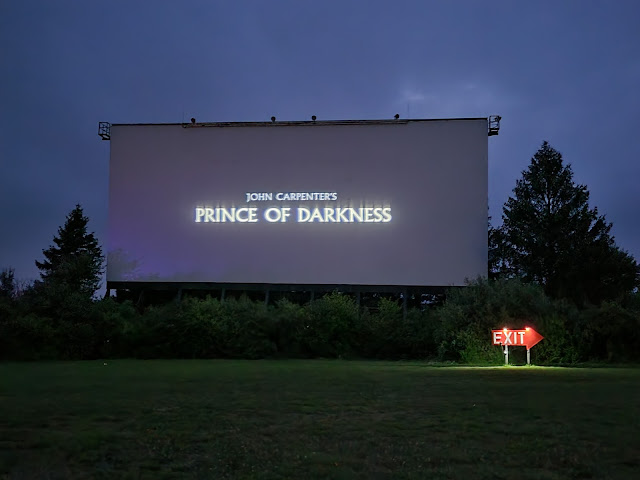 Prince Of Darkness
Mahoning Drive-In Theater - Lehighton, PA
Although my grandfather wouldn't let me rent Rated R movies when I was a kid, I still got to see a lot of horror flicks at a much younger age than most parents would be comfortable with.  John Carpenter's Prince Of Darkness was one of those films.  To this day, it is the only movie that has ever truly terrified me to the point where it gave me nightmares for years. 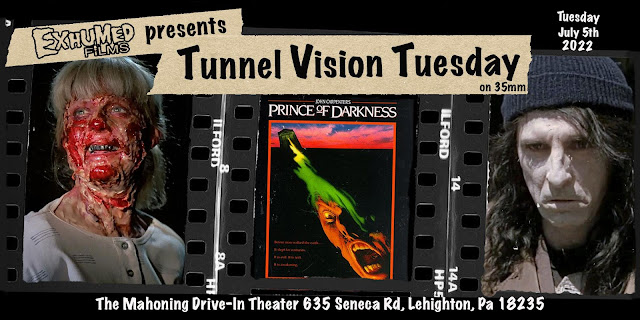 I was too young to fully understand what was going on in Prince Of Darkness the first time that I saw it.  It's a film that I re-watched many times as a teenager and have grown to appreciate it to the point of being my favorite horror movie of all time.  Seeing this at the drive-in was a dream come true, and the fact that the thunderstorms held off so that we could watch it from our camping chairs outside made it that much better. 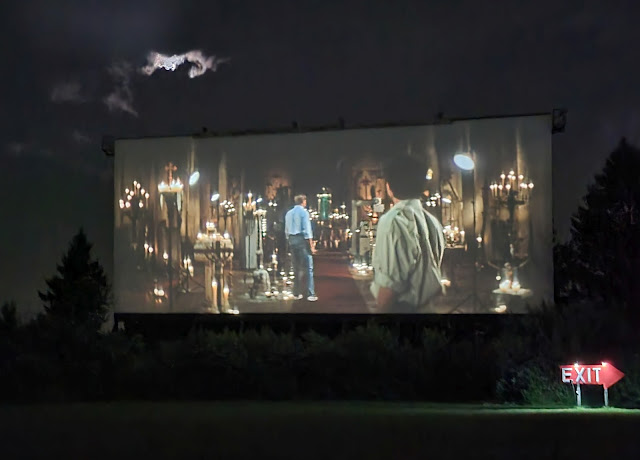 I usually try to avoid spoilers when I talk about movies, but since this is a movie that I've loved for roughly three decades and I can count on one hand the number of times I've had the opportunity to discuss it with anyone, I'm going to break my rule.  If you haven't seen it, consider this your spoiler warning.
The movie begins with a Catholic priest, who is referred to as The Guardian Priest several times throughout the movie.  He is the leader of a secret but benevolent sect within the church called The Brotherhood Of Sleep.  They have unquestioned authority within the hierarchy of Catholicism for nearly two thousand years, but their purpose and their actions are kept secret even from the Vatican.  The Guardian Priest has lived at the abandoned Saint Godard's Monastery in Los Angeles for 30 years, and is just the latest in a long line of priests who have stood guard at the Monastery since it was first built in the 1500's.  Below the Monastery is a basement with a locked chamber which holds a cylinder that is filled with a green liquid that is said to be the physical manifestation of Satan.
The Guardian Priest began to notice changes, both in the world around him and in the green liquid that he has been keeping locked up.  These changes are occurring in conjunction with the discovery of a supernova that dates back to Precambrian Era over four billion years ago.  The light from this supernova has traveled across the universe since the time that the Earth was formed, and it is just now reaching our atmosphere.  This has resulted in a number of strange effects, including a bright haze over Southern California, and a dramatic increase in insect activity.  Unknown to the rest of the world, it has also had an effect on the green liquid, which had previously been still, but is now beginning to stir.  The Guardian Priest decided that he must break his vow of silence to the Archbishop in an attempt to hold off the coming apocalypse, but he passed away in his sleep before the two could meet.
A second priest, who is brilliantly played by Donald Pleasence, discovers the writings of The Guardian Priest and pieces together the purpose of The Brotherhood of Sleep.  Upon doing so, he contacts a quantum physicist professor named Howard Birack (Victor Wong), whom he became friends with after the two men had a series of debates on BBC Television.  The priest's goal is to investigate the liquid and the associated writings and artifacts that have been kept at Saint Godard's Monastery, and to stand side-by-side with a respected figure in the scientific community to present their findings to the outside world so that this threat can be dealt with.  Upon seeing the evidence for himself, Professor Birack agrees, and he recruits a number of students and faculty from the University to spend the weekend at the Monastery to conduct the studies that are needed.  This group includes physicists, biochemists, a microbiologist, and a linguist who can translate Latin and ancient languages.
Among the things that this group discovers before the ensuing bloodshed is that the cylinder is sealed and locked from the inside.  The lid has corrosion which carbon dating shows to be seven million years old.  It was buried somewhere in the Middle East long ago by the father of Satan, who was a god that walked the Earth before the existence of human beings, but was banished to the dark side at some point after he buried his son inside the cylinder.  Jesus, who is of extra-terrestrial ancestry, comes to warn the people of the Earth, but he attracts too many followers and becomes too powerful, so the Romans had him killed.  The disciples of Jesus keep the secret about the cylinder and hid it away from the rest of the world until science progressed to the point where it could prove what Christ had been trying to warn us about.  A more recent warning comes in the form of dreams that everyone in close proximity of the Monastery is having, and it is these dreams that were the inspiration of my nightmares for many years.

You only get to see pieces of the dream throughout the movie before the character who is experiencing it wakes up, so it slowly unfolds over time.  As the narration states, these are not traditional dreams that come from the subconscious mind, but are instead broadcasts from the year 1999 that have been transmitted through tachyon particles back in time so that the people who receive them can take action in the past that can prevent what they're seeing from occurring.
I realize that this plot sounds convoluted, but John Carpenter harmonizes all of these elements perfectly to create an unsettling feeling that everything that you're seeing could actually happen.  It is eerie in a way that no other horror flick I have ever seen has been able to match, and that feeling was never more heightened than it was last night when I got to see this on the big screen under the stars. 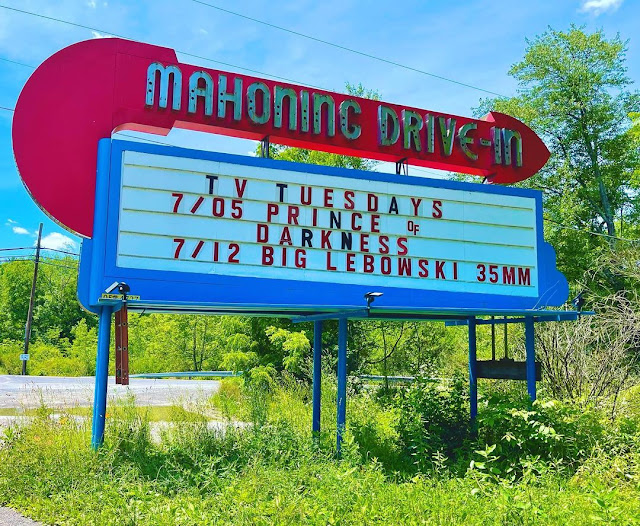 The Tunnel Vision Tuesday events have been top notch this season, and it continues next week with one of my top five films of all time, The Big Lebowski.