A Fireworks Sendoff For Aaron Barrett 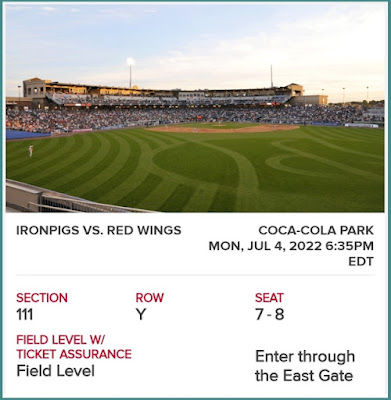 When we bought the tickets to my birthday game, we didn't realize that they were closing the night out with fireworks, so we also got tickets to the Iron Pigs game on the 4th of July so that we wouldn't miss out on seeing fireworks.  Our seats were in the top row of the lower level section directly behind home plate - the perfect framing for both the game and the fireworks show at the end of the night.

The food at Coca-Cola Park is really pretty good.  We stopped at the Blast Furnace Grill near the right field entrance.  I had the Three Little Pigs Sandwich, which is a barbecue pulled pork, fried ham and bacon sandwich on a kaiser roll, and a side of Philly Fries, which is basically a tray of french fries topped with the filling of a cheesesteak.  Needless to say, the weight loss goals I had at the start of the year are not exactly going according to plan. 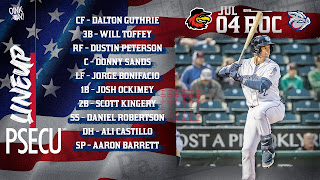 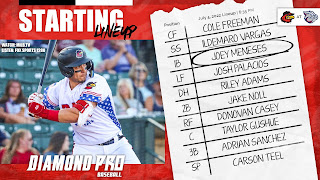 Most of the Phillies top prospects are below the Triple A level, but last night's lineup included a few players that I wouldn't be surprised to see in Philadelphia before the end of the year.  Second baseman Scott Kingery was one of the Phillies most promising young players just a few years ago, but barring a major comeback, those days are over.  Donny Sands was catching and batting third.  The Phillies acquired him in a trade with the Yankees this off-season, so if either JT Realmuto or Garrett Stubbs get hurt, Sands is the logical person to get called up.  Batting cleanup behind him was left fielder Jorge Bonifacio, who I forgot we even had.  He spent parts of four seasons in the majors with the Royals and Tigers, and he appeared in seven games for the Phillies last season. 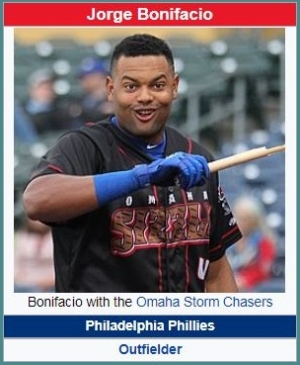 He may not be our top outfield prospect, but Jorge Bonifacio has by far the greatest Wikipedia profile photo of any member of the Philadelphia Phillies organization.  It was taken by Omaha Storm Chasers photographer Minda Haas Kuhlmann in 2019 when Bonifacio was with the Royals organization, and if it wasn't turned into a baseball card, it certainly should have been.
However, the main focus of last night's game wasn't a position player; it was the pitcher who started the game for the Iron Pigs. 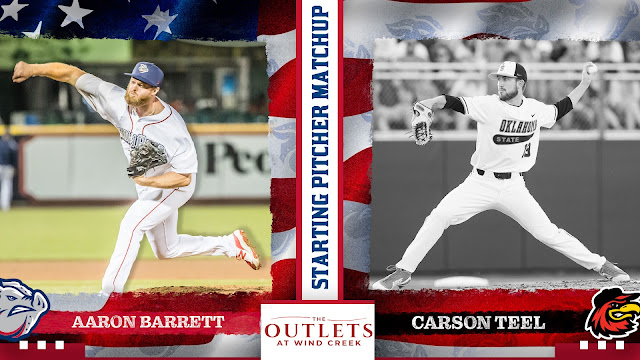 A few days before the game, right handed pitcher Aaron Barrett announced his retirement after the 4th of July game.  Barrett made his Major League debut pitching out of the Washington Nationals bullpen on Opening Day of the 2014 season.  He pitched a scoreless 9th inning with two strikeouts and earned the win against the Mets.  Unfortunately, a series of injuries that began the following season derailed his career.  He worked his way back to the Nationals in 2019, just in time to earn a World Series ring, but he was never quite the same as he was in 2014 and 2015.  The Phillies signed Barrett to a minor league contract this past March, but he's pitched to a 13.86 ERA over 12 ⅓ innings this season and has decided to call it a career. 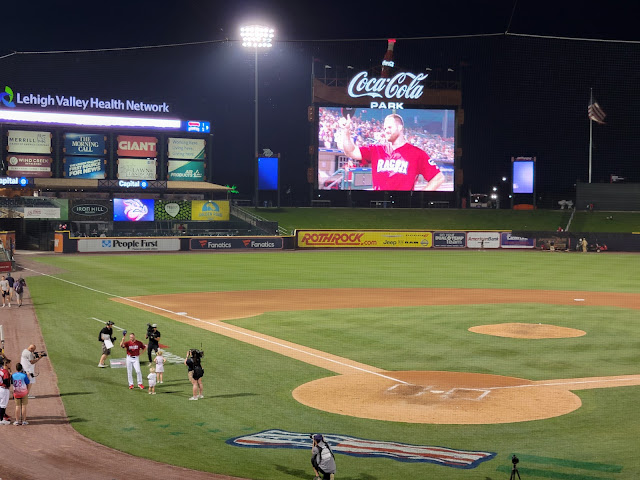 Mr. Barrett ended his career on a high note by striking out the first batter he faced and by pitching a scoreless first inning before handing off the ball to his manager.  There was a nice tribute to him after the game, and his career ended on a night in which he stood on the field holding his two daughters while watching a 4th of July fireworks show to close out the night.

The Iron Pigs used a total of seven pitchers in this game, and although none overshadowed Aaron Barrett, the winning pitcher of the night definitely left an impression.  James Marvel came into the game in the 5th inning and pitched 2 ⅓ scoreless innings.  He had a cup of coffee in the Majors with the Pittsburgh Pirates in 2019, but the thing I'll remember him for is his... um... unique delivery.

Jojo Romero made a surprise rehab appearance in the 7th inning.  He's one of my favorite pitchers with the organization, but his career hit a roadblock last May when he suffered an injury and had to undergo Tommy John surgery.  It's great to see him back on the field.  It won't be too long before he's back in Philly. 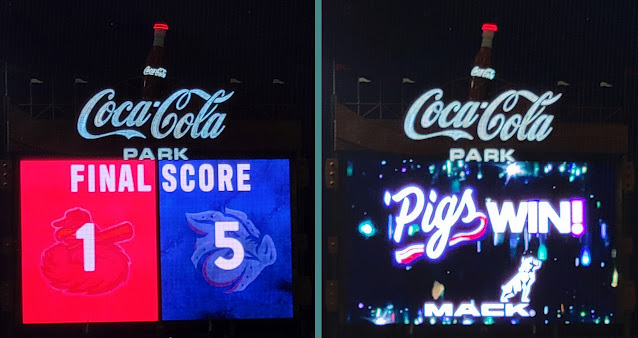 The Iron Pigs pulled out the win to keep the Phillies organization undefeated in games that we attended this season.  The Red Wings struck first in the top of the 2nd with a Jake Noll RBI single.  Center fielder Dalton Guthrie tied up the game in the bottom of the 4th, and the game remained tied until the Iron Pigs broke it open with a four run 6th inning.  Newcomer Daniel Robertson hit a double with the bases loaded that scored three runs.  Robertson just joined the organization on June 20th when the Phillies acquired him from the Minnesota Twins.  Ali Castillo tacked on an extra run with a line drive to center field that scored Robertson from second base.  That was the final run of the game and the Iron Pigs defeated the Red Wings 5 - 1.