More Food At The Fair 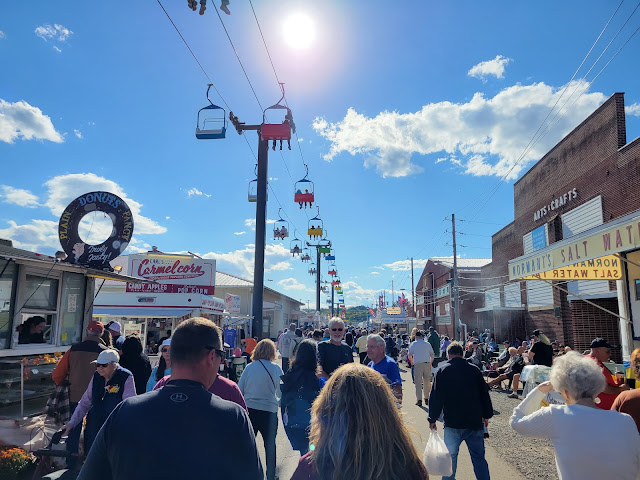 There's so much to see at the Bloomsburg Fair that it's not really possible to experience all of it in a single day.  With that in mind, we went back on Monday for a few hours and got to try some more food, so this is Part Two of food at the fair in 2022 (click here for part one). 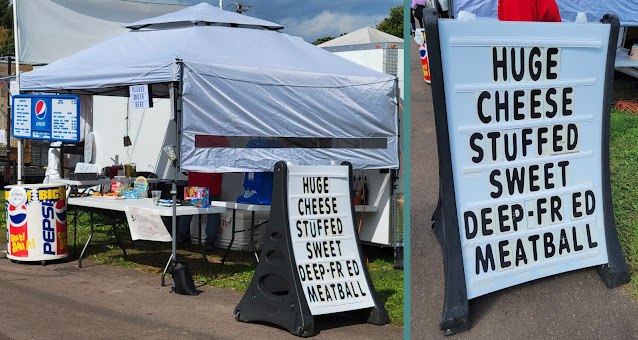 Two things caught my attention about this stand.  The first was the fact that they're offering a "Huge Cheese Stuffed Deep Fred Meatball".  My hope was that the letter i in Fried had fallen off and that they're not serving something sweet that has come from deep within a man named Fred.  The second thing that jumped out at me was the drink tub out front. Man, this thing is a blast from the past!  Pepsi came out with the 1 liter Big Slam bottles in the mid 90's, and they marketed the heck out of them.  I was a little too old to get into this fad, but I remember that there was a series of Pepsi Big Slam Pogs that were released in conjunction with the soda.  However, the thing I remember the most about Big Slam is all of the promotions they did with Shaquille O'Neal. 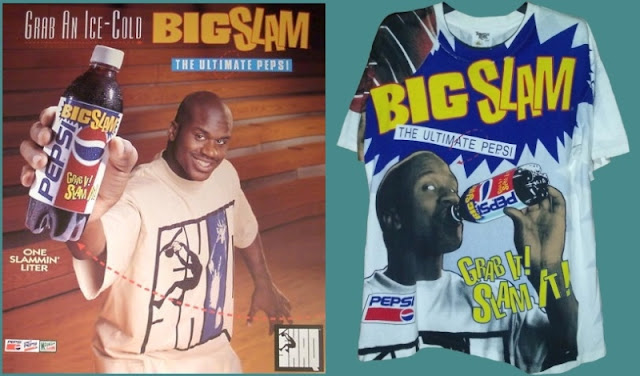 Shaq may have been a great basketball player, but in my opinion, his best skill is marketing.  This dude still appears in advertisements as the spokesperson for products and services to this day, eleven years after his retirement from the NBA.
Since I stood around taking pictures of this dude's stand, I would have been a pretty big jerk if I hadn't grabbed a bite to eat, so I went ahead and ordered one of his Fred Balls, which I'm going to have to refer to them as from this point forward.  I'm 42 years old, folks.  If I haven't matured by now, it's just not going to happen. 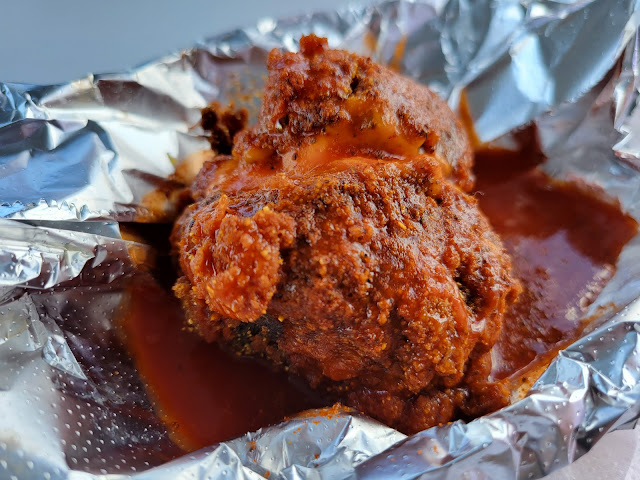 I didn't realize that this was an option until I ordered one, but you can your Fred Balls in regular or spicy, so I opted for the spicy one.  It was pretty huge, and it was loaded with cheese.  The spicy sauce tasted like Frank's RedHot, which is perfectly fine with me since it's what I tend to use at home.  I can't remember what I paid for it, but I remember feeling like I got my money's worth with this one. 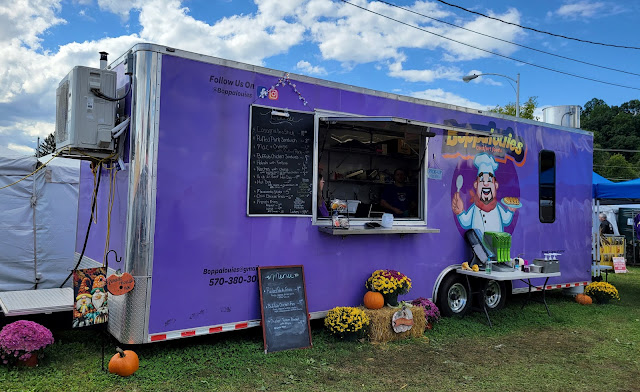 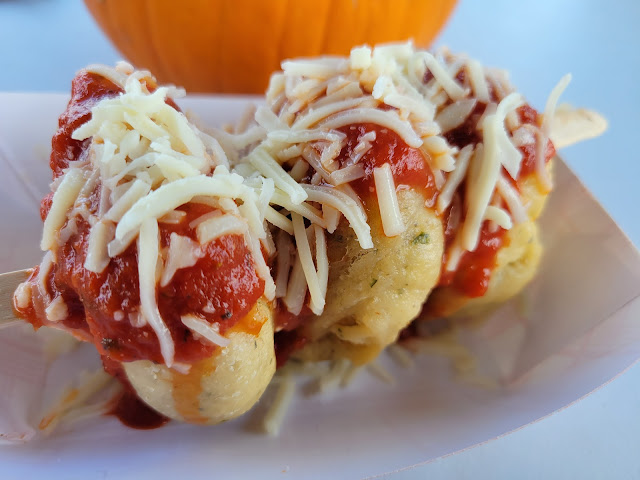 The next thing I had to eat was Lasagna On A Stick from the Boppalouies Comfort Foods truck, which is three medium-sized stuffed puffed dough balls which are topped with sauce and cheese and impaled onto a stick.  Each of these balls are about three bites worth and tasted pretty good.  Ten bucks was a little steep of a price so I'm not sure if I'd get them again, but they definitely weren't bad. 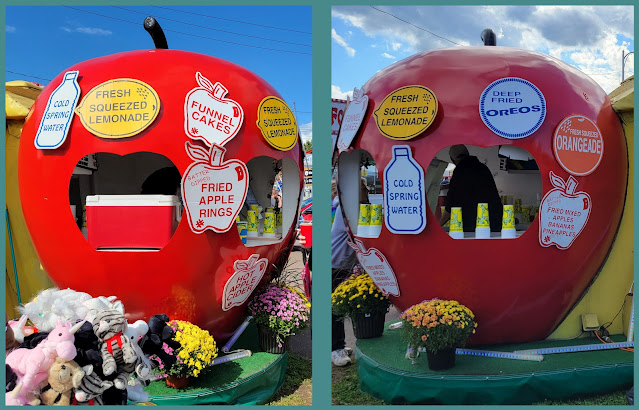 This isn't the only place where you can get a cup of apple cider at the fair, but we pretty much always end up stopping at this one.  Something about the giant apple really draws you in. 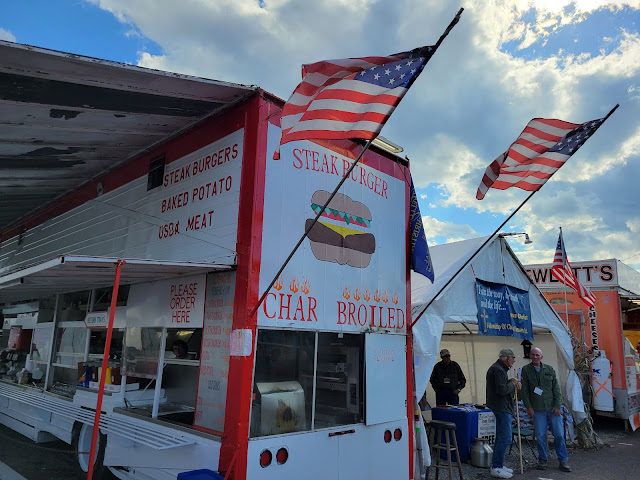 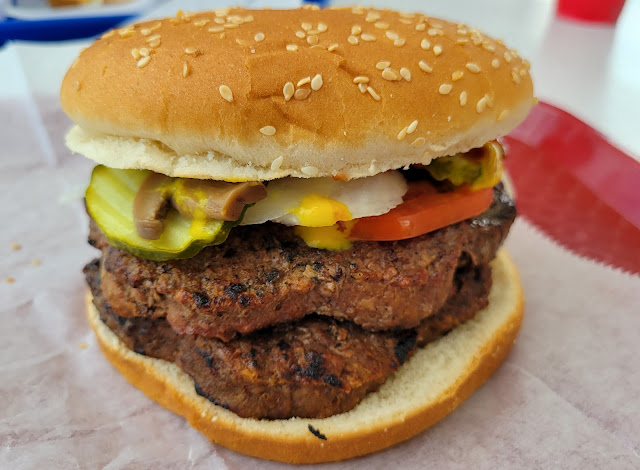 There are so many great things to eat at the fair so it might seem odd that I got something as simple as a burger.  However, we were both pretty hungry and we both remembered that we enjoyed the Char Broiled Steak Burgers Truck when we stopped here back when the two of us first started dating, so we decided to stop here for dinner.
It's a little hard to see from the photo, but the truck is set up to have you take a tray and pick up your burger and bun at the window at the first window at the end of the truck.  You can get a quarter pound, half pound or one pound burger, which is what I got (it's actually two half-pound patties).  You then work your way down the row to add condiments, lettuce, tomato, onions, mushrooms, cheese and whatever else you want, and to pick up your drink.  You pay when you get to the end where the television and cash register are set up, and there's plenty of seating near the tv so you can watch while you eat.  It's a pretty good setup, and the burgers are delicious and very reasonably priced considering how much food you're getting. 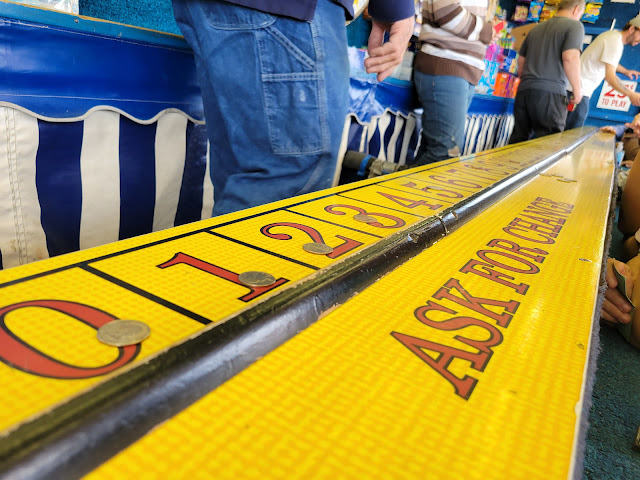 It was time for a little snack after dinner, so we stopped by Uncle Nick's Candy game next.  This is a game that I've played every year that I've lived in Pennsylvania since I was four years old.  You place a quarter down on one (or more) of the numbers on the board.  Then they spin a wheel which determines which is the winning number and how many candy bars they win.  When I was growing up, you could win either 3 bars, 6 bars, or a full box of candy.  The amount of candy that you can win has decreased over the years to 1, 3, 4 or 6 bars, but the price to play has remained the same for all these years - just a quarter.
My grandparents loved this sort of game, so they always played it with me when I was a kid.  My grandmother always picked #2, so I've adopted that as my lucky number when we're at the Candy Game.  This is one of those parts of the Bloomsburg Fair that gives me a very warm and nostalgic feeling. 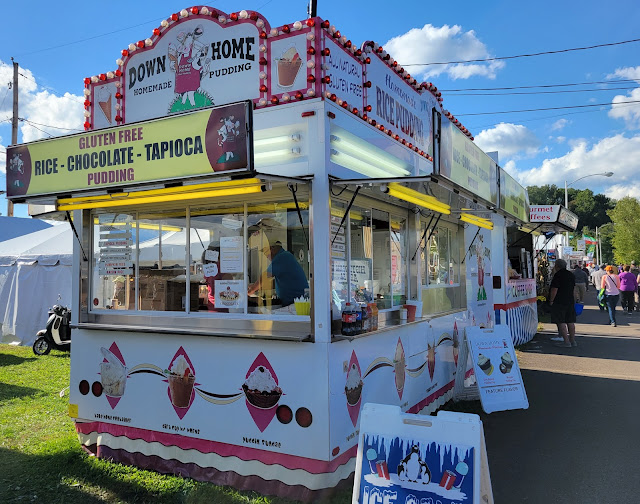 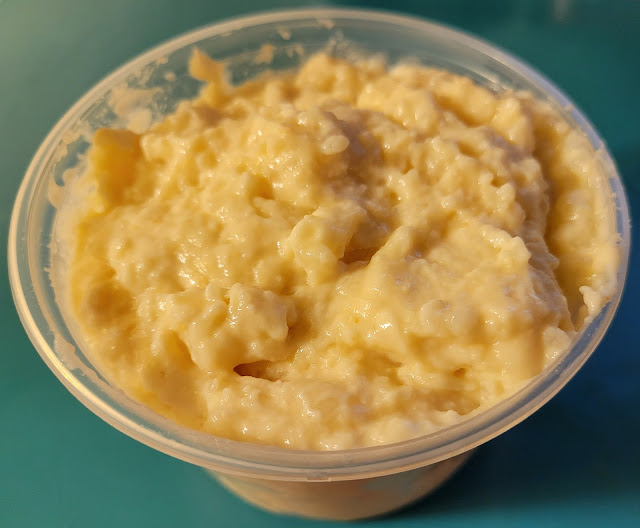 One of the snacks that we bring home every year is a tub of rice pudding from the Down Home Homemade Pudding stand.  I usually get pumpkin, but I got the banana cream flavor this time.  It wasn't bad, but I kind of wish I would have stuck with the pumpkin flavor.

There is way more food at the fair than I could ever eat even if I spent every day here from opening to closing time.  I can't think of a time where I ever had anything to eat here that I didn't enjoy, so you really can't go wrong no matter where you stop.