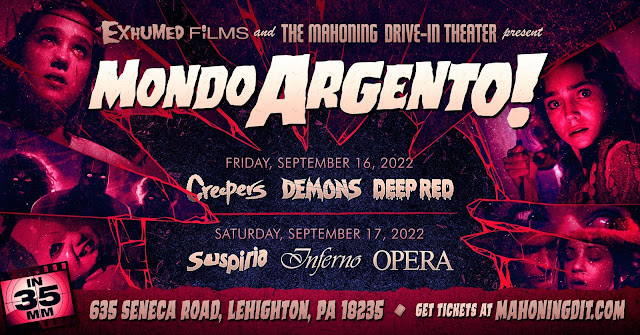 Mondo Argento
Friday: Creepers / Demons / Deep Red
Saturday: Suspiria / Inferno / Opera
Mahoning Drive-In Theater - Lehighton, PA
Five years ago, I had never heard of Dario Argento and had no idea what a Giallo film was.  The closest I had come to either is that I had once heard that some American actors go to Italy to make films, and that these sometimes get picked up and distributed in the United States.  If I had ever rented one of them back in the day, I didn't realize it at the time and I don't remember it today.  That was all changed by Joe Bob Briggs and The Last Drive-In on Shudder.
The tenth film of the original 2018 Last Drive-In Marathon was the Argento-produced 1985 horror flick, Demons.  It's absolutely batshit crazy and was one of my favorite movies that was shown that night.  They also showed Deep Red in the second season which aired at the start of the pandemic, and Tenebrae was screened during the most recent season four months ago.  If I'm being perfectly honest, I don't remember seeing Tenebrae so I'm guessing that I was at the Mahoning that night and hadn't gotten around to watching the episodes from this past season that I missed.  I'll never understand why Shudder can't air new episodes of The Last Drive-In during the winter months when most actual drive-in theaters are closed, but that's another topic.  However, I definitely remember watching Deep Red in 2020 and I found it to be one of the most fascinating films I had ever seen.
I've wanted to dig into the Argento filmography for a while now, so I jumped at the chance to buy tickets to a two-day festival of his works at the Mahoning Drive-In Theater. The poster for Mondo Argento was designed by artist Sarah Karess.  This isn't her first poster for an event at the Mahoning, but it's the first one for a show that I got to see and it's one of my favorite posters for the 2022 season.  Check out some of her other work on Instagram. 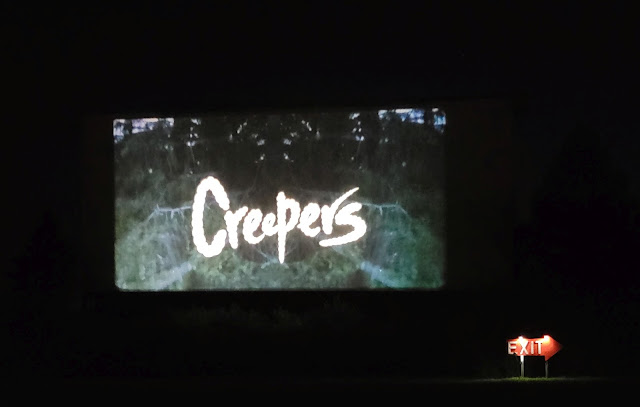 The opening film of Mondo Argento on Friday night was originally released in Italy as Phenomena in 1985.  New Line Cinema distributed the film in the United States, but not before they cut 20 minutes and renamed the movie as Creepers.  It was this American cut of the film that was screened at the Mahoning this weekend, but since this was my first time seeing this movie, I couldn't miss what I didn't know was supposed to be there.
Creepers stars Jennifer Connelly in her second film role, having been released a year and a half before she would go on to star alongside David Bowie in Labyrinth.  It also features the great Donald Pleasence in one of his many excellent performances.  Connelly is an American student who enrolls in a Swiss boarding school, and there are two things about her that make her the target of bullying from her classmates: she is prone to sleepwalking, and she loves insects.  She comes to realize that she actually has a psychic connection with insects, which is nurtured by a forensic entomologist (Pleasence) who lives not far from the school.  These powers play a role in the two working together to catch a serial killer who has been murdering young girls in the area.
This film absolutely blew me away!  When I saw the description written out, I thought "this could be ok", but it's an absolute masterpiece.  It's not for everybody (particularly if the sight of bugs bothers you too much to enjoy a movie), but this is easily one of my top five flicks that I saw for the first time at the Mahoning.  I'm going to have to set aside some time this winter to watch the uncut version. 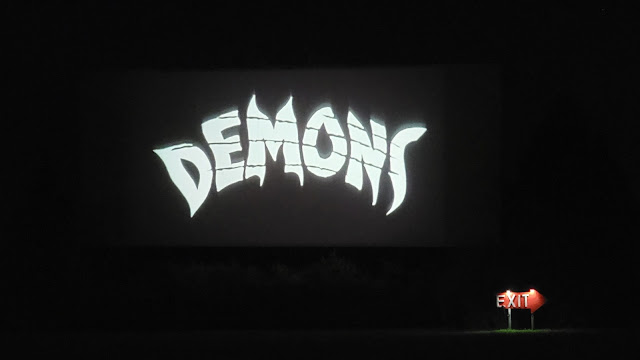 The movie that I am the most familiar with from the Mondo Argento weekend was the second film from Night One.  I first saw Demons in 2018 when Joe Bob Briggs screened it as a part of the original Last Drive-In marathon, and I've watched it several times since then.  This isn't actually an Argento movie (it was directed by Lamberto Bava), but it was produced by Dario Argento and it certainly fit with the theme of the weekend.
Demons takes place in Berlin where a group of people attend a screening of a horror movie after being given a free ticket by a masked man.  The lobby of the theater has a display set up with what appears to be props from the movie that they're about to see.  This includes a mask that has a sharp pin on the inside.  One of the moviegoers puts the mask on and is scratched by the pin.  Later while they're watching the movie, she notices that one of the characters in the film is also scratched by the mask, after which they transform into an evil demon who begins attacking her friends.  The woman from the audience who was scratched excuses herself to the bathroom, and sure enough, she begins to transform into an evil demon who starts attacking the rest of the theater.
From this point, the movie starts to feel like a zombie flick because the people who are attacked by the demon transform into demons themselves, and a group of strangers have to work together to find a way to survive.  I don't want to spoil any more of the movie than I already have, but you should know that the plot just gets crazier from here, and it's one hell of a fun ride! 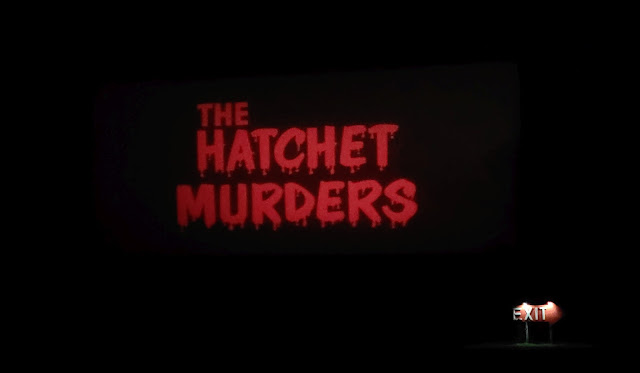 The last movie of the first night was the 1975 Giallo classic Deep Red.  It was called The Hatchet Murders on the title card that we saw, which suggests that the 35mm print of the film that was screened at Mondo Argento is from January 1980 when the film was re-titled and re-released in the United States. 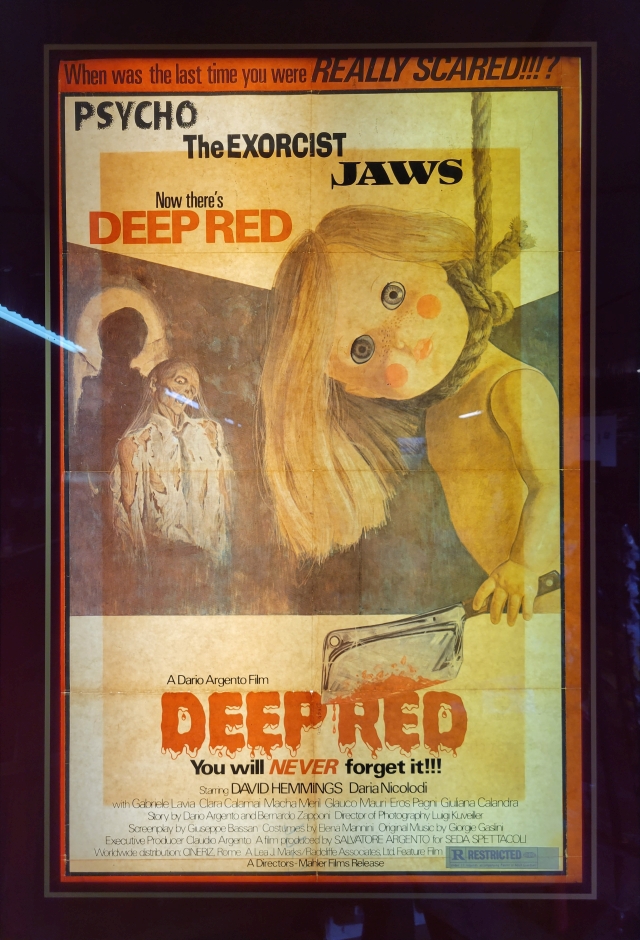 Deep Red is a cinematic masterpiece.   It's a visually stunning murder mystery which strikes the perfect balance of having a deep plot without crossing the line to being so complex that you have to be a student of filmmaking for the story to make sense.  I am far from an expert on his body of work, but out of the movies of his that I have seen, I think that Deep Red is Dario Argento's finest work. 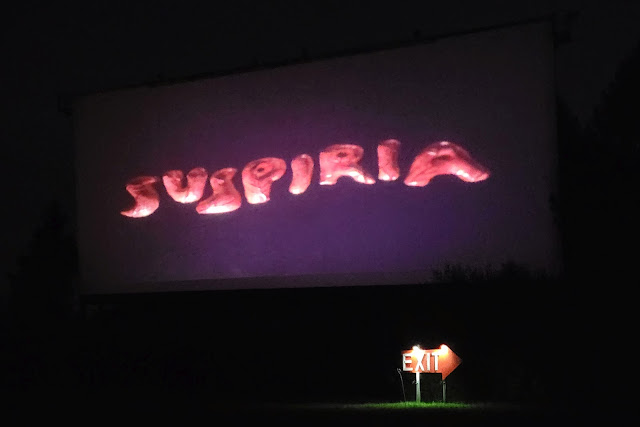 Before I get into my thoughts on Suspiria, I want to make it clear that I was really looking forward to seeing this movie.  It's widely considered to be Dario Argento's finest work, and is the first film in The Three Mothers trilogy.  I had heard about this movie for years and always wanted to see it, but I never got around to watching it.  In fact, I didn't even really know what it was about.  I knew it by reputation only, and the opportunity to experience a classic film for the first time at the Mahoning Drive-In Theater is one that I truly cherish.
One thing I will say about this film is that it is absolutely beautifully filmed.  The sets and shots are colorful and stunning and give the movie an other-worldly feeling.  Having said that, by the time the credits rolled, my first thought was "man, it's a shame that they wasted such incredible shots on a dull screenplay".
It's not that I think Suspiria is bad necessarily, but it doesn't come anywhere close to living up to the hype.  It's the story of a ballet dancer who moves to Germany to attend a highly prestigious boarding school of dance, only to learn that it's being run by an evil witch.  The villains border on being generic stock characters.  They're not particularly interesting or well-written, nor is the protagonist or any of the other students in the school.
The worst part of this movie was its use of music.  It's not that the music was bad, but the way that it was used reminded me of the way that television sitcoms use a laugh track to sell jokes that aren't funny.  The film blasted trippy prog-rock over long stretches of bland scenes where the plot grinds to a halt with nothing of interest happening on the screen to artificially inject a feeling of suspense.  Like the visuals, I was left thinking "damn, it's a shame they didn't use this music in a better film".
Go ahead and watch it and decide for yourself.  Again, I don't think it's a bad movie.  It's ok.  I'd give it  2.5 stars out of 5 for the stunning visuals alone, but for the ridiculous amount of praise that has been heaped onto this, I was expecting this film to be amazing, and it was just kind of... meh.  I probably would have enjoyed it more if I hadn't gone in with such high expectations, but as it stands, I'm just happy to be able to check this off of my list just to say that I've seen it. 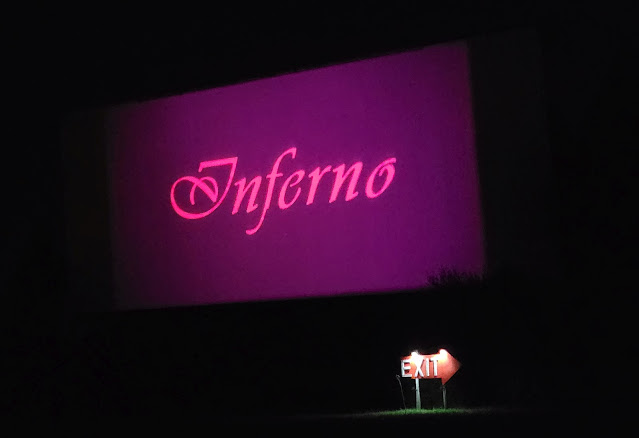 My takeaway from Suspiria is that it was a disappointment, but not a bad movie overall.  However, it was a thousand times better than the second film of the second night of Mondo Argento, which is also the second film in The Three Mothers trilogy.
I spent twenty minutes staring at my keyboard trying to think of anything positive that I could say about the 1980 film Inferno, and the best that I can come up with is that some of the shots of the architecture are impressive.
Simply put, this is gore porn, and it's not even a particularly good example of it.  There is zero character development, or even an attempt at character development, so I had absolutely no investment in the characters who were getting killed.  I'm writing this less than 12 hours after seeing the film and I can't even remember their names.  The only death that provoked any kind of reaction at all from me was when some guy killed a cat.  I don't even remember who the guy was, and I don't care enough to look it up.
The plot was such a convoluted mess that I'd need to be able to pause it and take notes to understand the story that they're trying to tell.  Perhaps this means I'm not smart enough to keep up with it, and I won't argue that this isn't the case.  Maybe I would have got something out of this film if it was shown on The Last Drive-In with Joe Bob breaking in to make me laugh and to say something that inspires me to give a damn about any of these characters.  The bottom line is that I watch movies to relax and to have a good time, and this one just bored me half to death.  I never knew 107 minutes could feel this long. 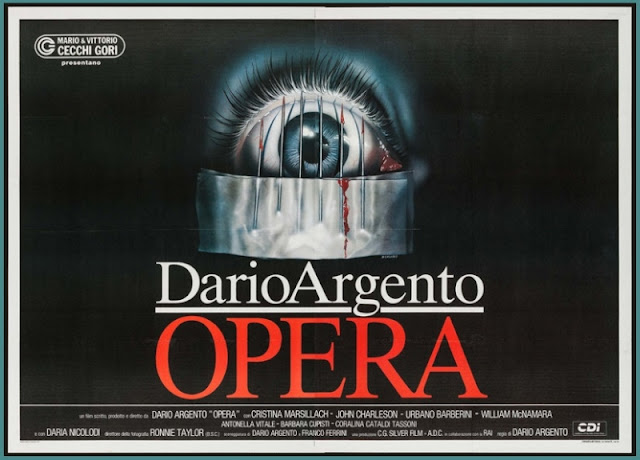 I couldn't tell you how Opera was because we didn't stick around long enough to see it.  When faced with the option of either getting home at a somewhat reasonable hour or the possibility another hour and a half of what we just saw in the first two films (after a long intermission hawking raffle tickets), both my wife and I agreed that a fluffy bed was looking pretty good right about now.  For all I know, Opera might be the best film ever made, but that's a discovery that I'll be happy to make some other time. 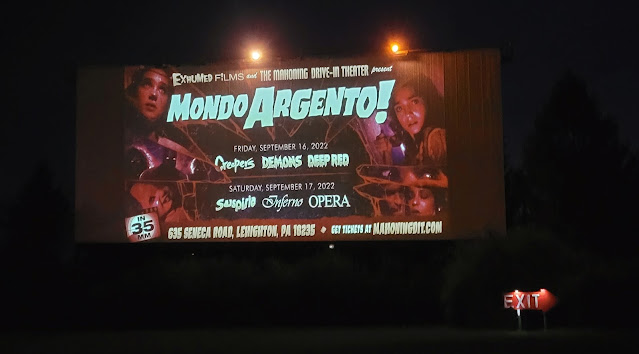 If I had to do it over again, I would have just bought tickets to Night One, but Suspiria has been on my bucket list of films to watch for so many years that I was genuinely looking forward to last night.
I guess that they can't all be winners