Ferris Bueller Is A Time Lord 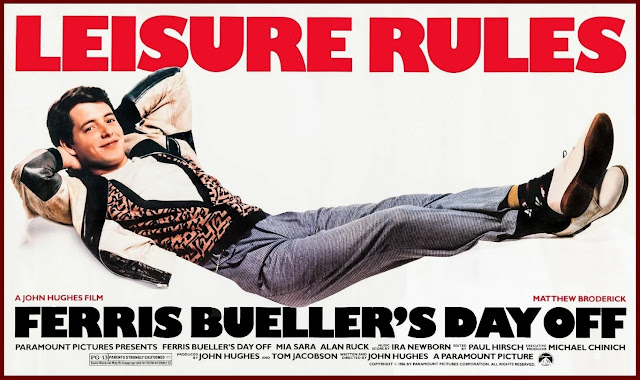 We got to see Ferris Bueller's Day Off at the Mahoning Drive-In Theater last weekend.  It's a movie that I'm very familiar with, but have never had the opportunity to see on the big screen before.  As we watched, I found myself looking at some of the places and things in the background and wondering if there were enough clues to determine what day Ferris Bueller took off. 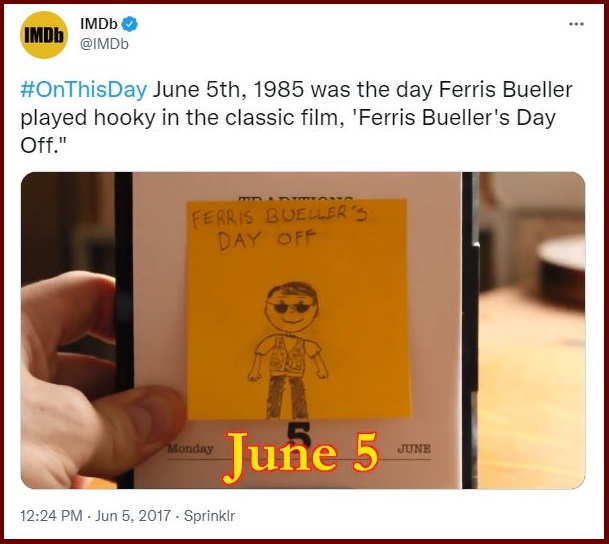 I did a Google search when we got home and found a video on Twitter from IMDB which treats this as an open and shut case.  They have determined that the day Ferris Bueller skipped school with Cameron and Sloan was June 5th, 1985, and their evidence for this is based entirely on one scene in the film - the ballgame between the Braves and Cubs at Wrigley Field.

In a 2011 article for Baseball Prospectus, Larry Granillo examined several things that we can see take place in the game during the movie.  The Braves have a runner on first with no outs.  The television in the pizza shop shows the runner on screen for a few second, and he has been identified Paul Zuvella (#18).  This scene also shows that Leon Durham (#10) is playing first base for the Cubs.  Announcer Harry Caray lets us know Zuvella reached base on a single, and gives us a few more clues by saying "that's the first hit they've had since the fifth inning, and only the fourth hit in the game".  We then see that reliever Lee Smith is pitching for the Cubs, and Braves right fielder Claudell Washington fouls off a pitch to deep left field which Ferris Bueller catches in the stands. 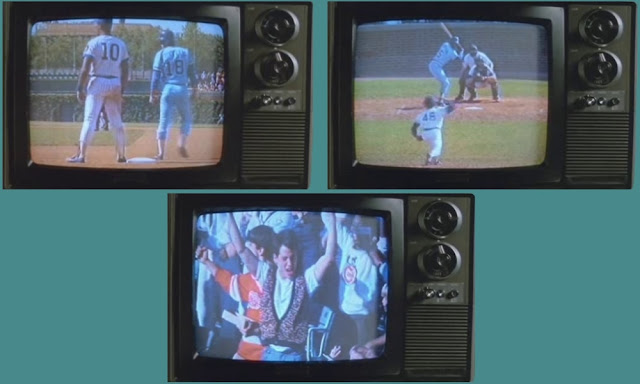 This may not seem like much to go on, but it's a pretty specific fact pattern that can be used to identify which game these events took place in.  First of all, the movie was released on June 11, 1986, so the game had to have taken place well before that date.  Lee Smith didn't face the Cubs at Wrigley Field at all in 1986, but he did pitch against the Braves at home in Wrigley a total of four times during the 1985 season.  In the top of the 11th inning of one of those games, he gave up a single to Paul Zuvella, which was the first hit that the Braves had since the 5th inning and their fourth hit in the game, and the next batter in the Braves lineup that day was Claudell Washington.  That game took place on the afternoon of June 5th, 1985.
This date makes sense from a storyline perspective as well.  The story takes place on a beautiful Spring day, which is what inspires Ferris Bueller to take the day off in the first place.  We know it must be toward the end of the school year because in one of his talks with the audience, Ferris mentions that he and Cameron would very soon be graduating from high school.  Also, Principal Rooney warns Mrs. Bueller that "if Ferris thinks that he can just coast through this month and still graduate, he is sorely mistaken".
So, that must mean that Ferris skipped school on June 5th, 1985, right?
Maybe... but there's more to the story.

After the ballgame, our heroes visit the Art Institute of Chicago before taking a cab to the Von Steuben Day parade.  There are quite a few coats and jackets in the crowd for a beautiful day with temperatures expected to reach the upper 70s according to the DJ at the start of the movie.  This is probably because the annual Chicago parade that is held in honor of General Friedrich Wilhelm von Steuben takes place in September.  Unfortunately, I wasn't able to find an article about the Von Steuben Day parade in 1985, but there's a clue on the movie theater marquee in the background of this shot that helps us narrow down which date in September this took place.

This theater at 45 West Randolph Street on the Loop started out in 1921 as the Apollo Theater.  It was sold to the United Artists Corporation in 1927 and it remained in operation as a single screen United Artists movie theater for over 60 years until it closed in 1988 and was demolished a year later.

While the 1985 Von Steuben Day parade was taking place, this theater was showing Godzilla 1985 (which we got to see at the drive-in earlier this year) and Teen Wolf.  Both of these films premiered in theaters on August 23rd, 1985.  It's not too surprising to see that they were both being shown at the United Artists theater in downtown Chicago on the weekend of September 20th.  The theater only has a single screen, and the summer of 1985 was especially loaded with blockbuster films that were competing for screen time.
The letters below these two features on the marquee are partially obstructed, but it's pretty obvious that it says:
Coming Soon:
Chuck Norris
Invasion USA
The Downtown Chicago UA might not have had Godzilla 1985 or Teen Wolf on opening night, but they made sure to lock down the Cannon Films classic Invasion USA for its premier.  Since the two features on the marquee were being screened at this theater starting on September 20th with Chuck Norris karate kicking them out of the projection booth on the 27th, we can narrow it down to this date range.  In addition, while I wasn't able to find anything with the exact date of the parade, the Chicago Tribune did publish a photo from the parade on Sunday, September 22nd.  Since this all takes place on a school day, I think we have enough evidence to conclude that Ferris performed Danke Schoen and Twist And Shout on the parade float on Friday, September 20th, 1985 - three and a half months after he caught the foul ball at Wrigley Field.

So, did Doc Brown install an extra flux capacitor in the taxicab that our heroes took to the parade?  It's possible, and it would make a pretty good basis for a fan fiction that ties together the universe of Back To The Future with the John Hughes films, but I think there's another explanation, and it also answers the question of how he can squeeze so many different things into a single day.
Ferris is very confident that he won't get caught despite the fact that over 60,000 just saw him lip syncing on a parade float.  He's a confident dude to begin with, but there's more going on here.  He is absolutely certain that no one at that parade would ever turn him in, despite the fact that his father's office is in downtown Chicago and he could easily have taken a few minutes away from his desk to watch the parade floats go by.
Why is he so sure that he won't get caught at the parade?  I think it's because he knows that they've traveled to September 20th because Ferris Bueller is a time lord.

Ferris takes a moment at the beginning and end of the film to clue us in on what's going on.  He looks straight into the camera at the audience and tells us that "Life moves pretty fast. If you don't stop and look around once in a while, you could miss it" and that's all he's doing by taking the day off from school.  He's about to graduate from high school.  He laments to the camera during the scene when Cameron is catatonic that he and Cameron will have jobs during the summer, and then they'll both go to different colleges while Sloan stays behind for her senior year of high school, and then that will be it.  He may not be at a Doctor Who level of controlling time and space, but he has some ability to stretch out the day by traveling a short distance within the year to spend a little more time with his best friend and his girlfriend.
He knows that he'd be able to take a day off from his college classes, and he can take a sick day or a vacation day from the job he'll have after college, but there's something special about taking a day off from high school.  It's special because it's forbidden, and you run the risk of getting caught.  He's living the last few weeks where he can enjoy the thrill of getting away with skipping school.  He's stopping and looking around in the last moments of his adolescence because he knows that it won't be long before he misses this time of his life.