A Night Of Surprises At The Drive-In 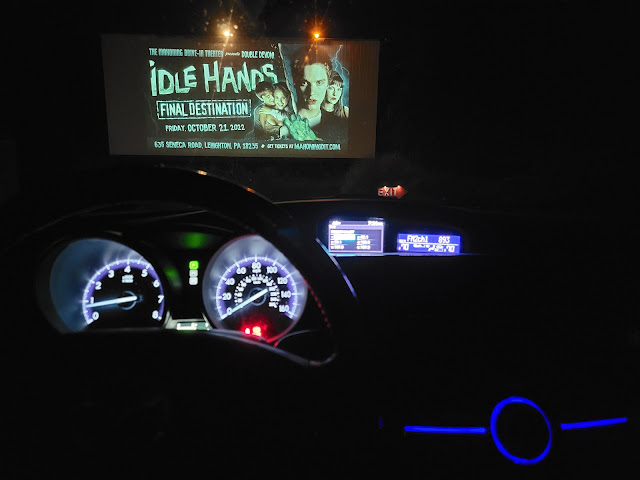 Double Devon: Idle Hands / Final Destination
Mahoning Drive-In Theater - Lehighton, PA
One of the best parts about the Mahoning Drive-In Theater is the surprises.  These come in many different forms: secret features, photo ops, costumed characters, introductions from the cast and/or crew, new movies on the VHS tape wall, songs that slipped under my radar on the pre-show set, and the list goes on and on.  I wasn't expecting anything extra when I bought the tickets to Friday night's double feature - just a fun night out at the movies, but there were quite a few awesome surprises in store.
It's not unusual for the Mahoning to have a special guest on the lot, but they're usually announced months in advance.  These folks set up a merch table to sell autographed photos and other merch relating to their films, one of which is showing up on the big screen that night.  It's always awesome to meet them, and even if I don't have the spare cash to pick something up from their table, I respect the fact that they've made the trip to the drive-in, and I certainly don't begrudge them making a few bucks.  They win.  The fans win.  The drive-in wins.  It's a pretty sweet deal for everybody. What is unusual is when the director learns that they're showing one of his films at the drive-in and decides to drive down to meet fans and to check the place out, but that's exactly what happened last night.  Rodman Flender learned that the Mahoning was screening Idle Hands as the first film in last night's Double Devon double feature.  He then watched the At The Drive-In documentary about how the Mahoning had become what it is today, and he decided to head down to Lehighton for the event.  He was happy to meet fans to chat, sign autographs and take pictures, but he wasn't selling anything.  He also spent a lot of time with Virgil on the radio during the pre-show to talk about his work on Idle Hands and about movies in general.  It was very chill and relaxed and special, and I'm very happy to have been able to be there for it.
In addition to Idle Hands, Mr. Flender also directed Leprechaun 2 and several episodes from hit television shows, including The Office, Dawson's Creek, Party Of Five, Gilmore Girls, and the Scream television series, and he has both writing an directing credits on Tales From The Crypt.  The part of his resume that had me geeking out the most was that he was the production manager for the 1989 Jim Wynorski horror comedy Transylvania Twist. 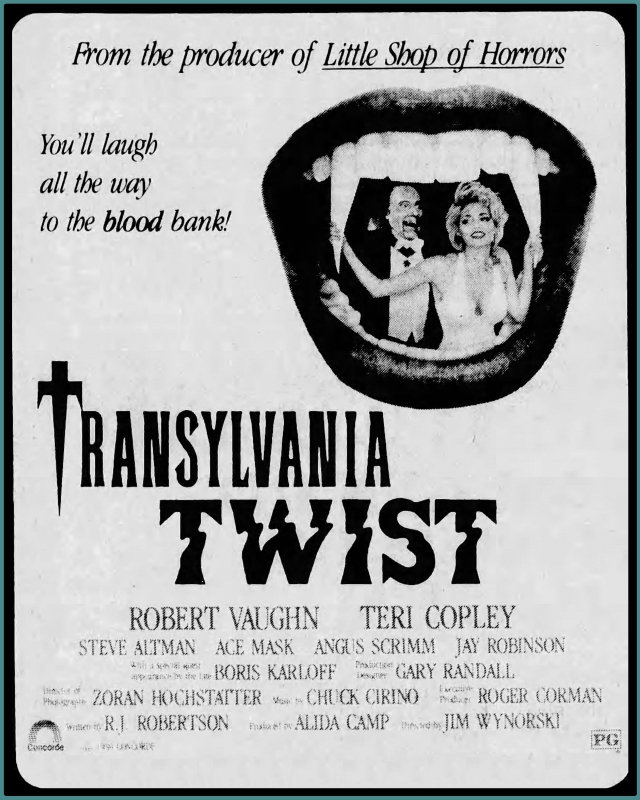 If you've never watched Transylvania Twist, I highly recommend it.  Parody films can be challenging.  They can make for an all-time classic when they're done well, but they can also be terrible if the writing is lazy and relies only on making references without the care to making those reference funny or well-timed.  Transylvania Twist reminds me of a Mel Brooks film, and it's right up there with Airplane, Spaceballs and The Naked Gun as an example of parody that is done right.  It's clever without being crass.  It's cheesy without being stupid.  It's the kind of movie that you can watch with a young child and with your elderly grandparents and everybody is going to have a smile on their face throughout its runtime.  I'm not sure why this movie didn't get as popular as other parody films of the 80's, but it is definitely just as worthy of your time.
I got a little off-track there rambling about Transylvania Twist, which is pretty much exactly what happened when I met Mr. Flender in the projection booth last night.  I'm always happy to meet the folks who come to visit the drive-in, but I never know what to say to them.  I'm not especially knowledgeable when it comes to movies and I'm pretty awkward with conversations in general, but I did want to shake the man's hand and thank him for coming down to spend time with us.  He was a very gracious and good dude, and I'm glad to have met him. 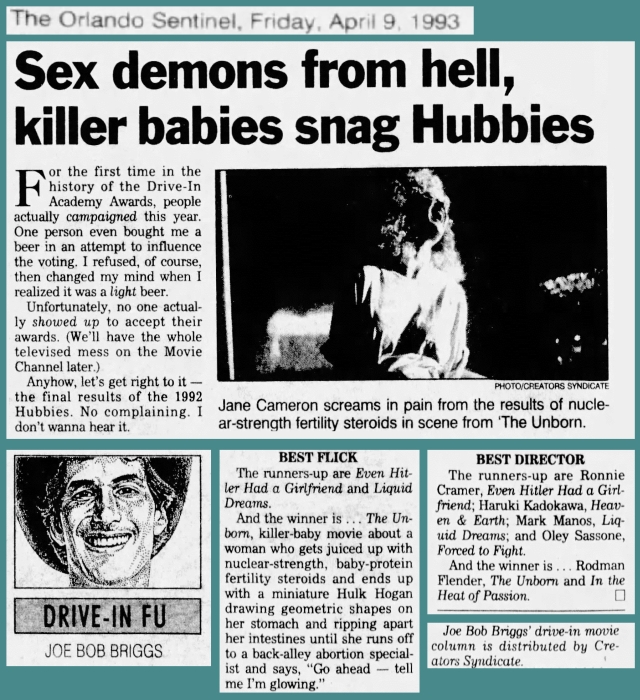 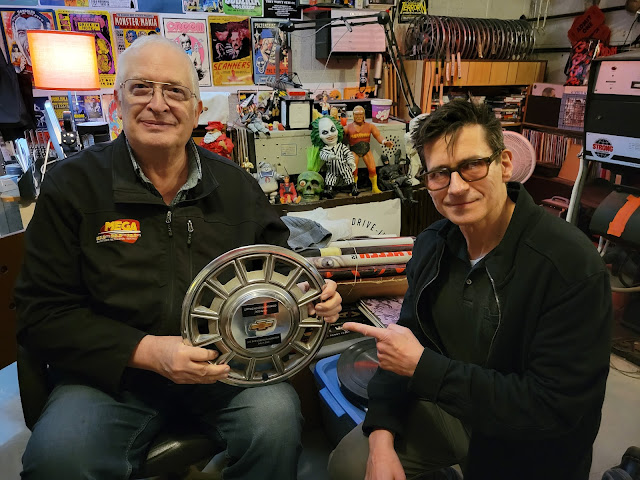 Joe Bob Briggs came up in conversation while I was in the projection room, and Mr. Flender mentioned that he won one of his Drive-In Academy Awards (aka: Hubbie Award) from the legendary drive-in movie critic back in 1992 for The Unborn.  Jeff mentioned that he, too, is a Hubbie Award winner after being honored with the Lifetime Achievement Award at Joe Bob's Drive-In Jamboree last year.  I don't suppose it's too often that you find two Hubbie Award winners in the projection room at a drive-in theater, so I asked if I could take a photo of the two of them to mark the occasion, and both were kind enough to oblige. 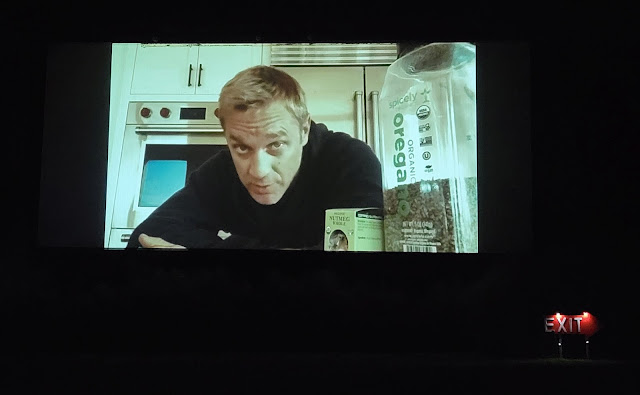 In addition to the opportunity to meet Rodman Flender and to hear him talk about the movie we were about to see, the film's star, Devon Sawa, recorded an introduction to the movie that was played on the big screen.  I've seen quite a few cool intros at the Mahoning in the year and a half that we've been coming here, but this may have been the best one yet.  He grabbed nutmeg and oregano from his cupboard and did the intro totally in character as Anton Tobias from Idle Hands.  It was awesome! 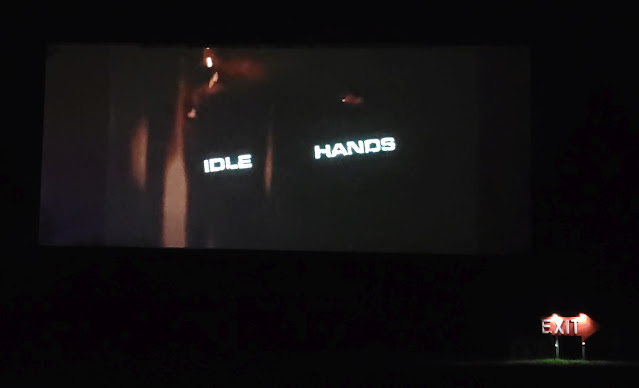 The first film of the Double Devon double feature was the 1999 horror comedy Idle Hands, which is a movie that I actually had never watched before.  It's one of those movies that I've seen at the video store many times and just never got to see it.  Better late than never though, because I can't imagine a better scenario to seeing a movie for the first time than at a drive-in theater just a few minutes after getting to meet and talk with its director.
I really enjoyed the hell of out of this flick!  It perfectly captures the feel of the late 90's and delivers a lot of creepy laughs throughout its runtime.  It reminded me a lot of the dark comedy/horror movies from the 80's that I saw when I was growing up. 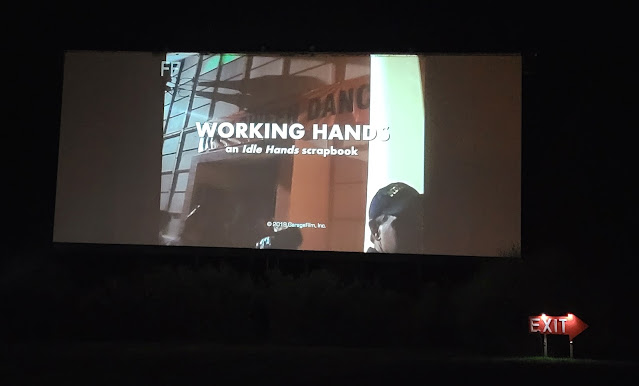 In yet another incredible surprise, Rodman Flender brought a behind-the-scenes video scrapbook that he shot on set while he was making Idle Hands 23 years ago.  He mentioned that this has only been shown to a handful of people before tonight, so it's pretty amazing to have had the opportunity to see this.  The video ended with some of the press that they had gotten in anticipation of their nationwide premier on April 30th, 1999.  The movie was ultimately released on that date, but the Columbine massacre occurred ten days earlier.  Politicians and the media were out in full force to point to anything they could to blame for the shooting, and a horror comedy about a high school kid whose hand gets possessed to kill was an easy target.  The video scrapbook included news footage of Senator Joe Lieberman (who would go on to run for Vice President in the following year) calling out Idle Hands by name with his nonsensical rantings and ravings.  Movies don't kill people, Senator.  Easy access to deadly weapons to people who are willing to use them to commit atrocities are what kills people.
Circumstances that were completely beyond the control of the talented men and women behind this movie played a huge role in its lack of success at the box office.  It's a shame, because it really is a hell of a lot of fun and it deserves to find its audience. 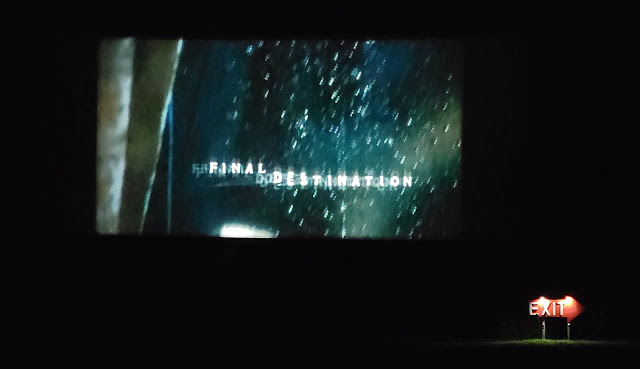 The second half of Double Devon was the first movie in what has gone on to become my favorite horror franchise of the 21st century, the 2000 film Final Destination.
When the discussion topic comes up of who is the scariest character in horror movie history, my answer is not Freddy Krueger, or Jason Voorhees, or Michael Myers, or Leatherface, or Pinhead, or any of the other iconic villains from the history of horror films.  The horror movie character that scares me the most is the diver of the log truck in Final Destination 2, and I'm not joking at all.  I have no fear whatsoever about a crazed supernatural creature butchering me in the real world.  Nothing those characters have ever done in a movie has caused me to alter my behavior in any way.  That log truck though... yeah, that sent a shiver up my spine that has continued for the past two decades since I first saw that movie.  If I'm on the interstate and I see a log truck, you can bet your ass that I'm going to do everything that I can to put that thing in my rear view mirror as quickly as I can.  You can tell me all day about how that scene is unrealistic and it could never happen, but I don't want to hear it. 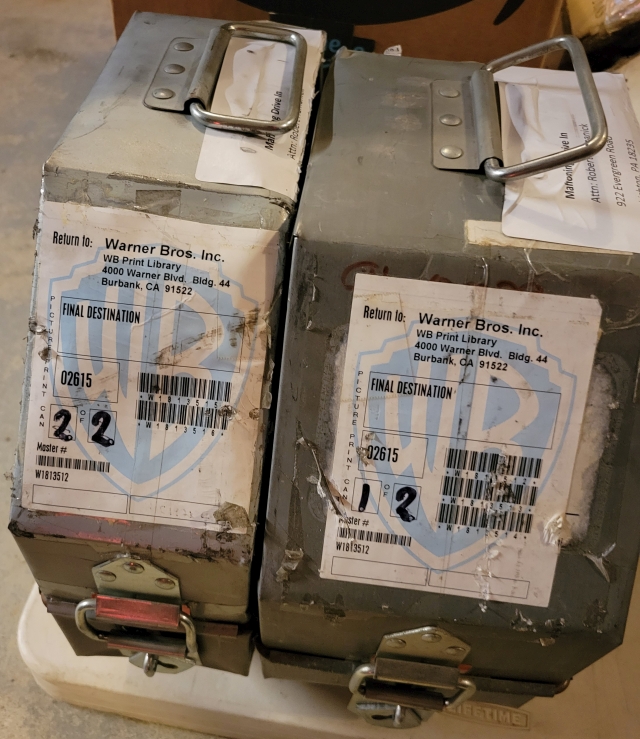 Devon Sawa didn't return for the first sequel of the Final Destination franchise, but he was awesome in the movie that started it all.  I didn't catch this one in theaters during its initial run, but I've watched it many times over the years on home video and it's one of my favorite horror movies that has come out in my adult life.  Having the opportunity to see it on the big screen at the drive-in is what the Mahoning is all about.  I've said it before and I'll say it again: I don't care how big your television is or how good your speakers sound; there is nothing that can replicate the experience of seeing a movie on the big screen at a theater.  Whether you're at an indoor theater or a drive-in, it's a whole different experience, on the level of the difference between watching a music video or a ballgame on tv compared to going to see a concert or a game at the ballpark.  The Mahoning has given me the opportunity to see so many movies that I missed on the big screen, and to relive the experience of seeing some of my favorites that I did catch during their initial theatrical run, and that's truly special to me.  And that's why I'll keep coming back to this place as long as I possibly can.